Alan and Janet had not been dating long before she threatened him with a 'good blistering'.
Alan laughed and requested a clarification which his assertive new girlfriend was happy to provide.
He felt his face flush when Janet explained which area of his anatomy which would  be blistered and how she intended to do it.
"Blistering of the skin occurs when it experiences intense heat and , believe me Alan darling , my hairbrush will create very intense heat when I apply it to your bare bottom!" Janet informed him matter of factly.
"Don't worry Alan , we will be having a long 'discussion' about all this very soon Alan!" she adds.
Alan still did not believe her until it was time for that 'discussion'...... 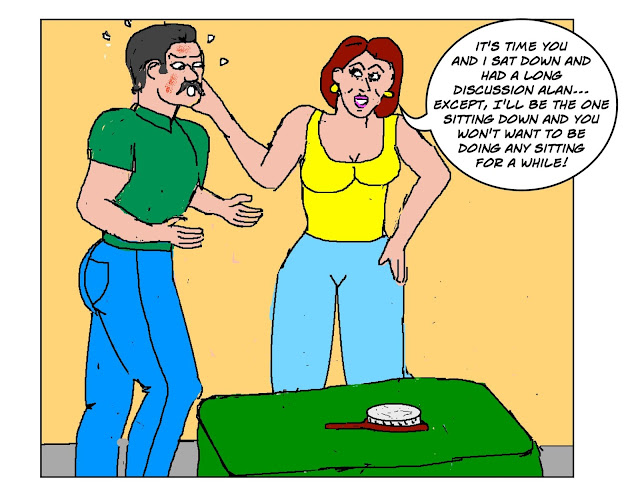 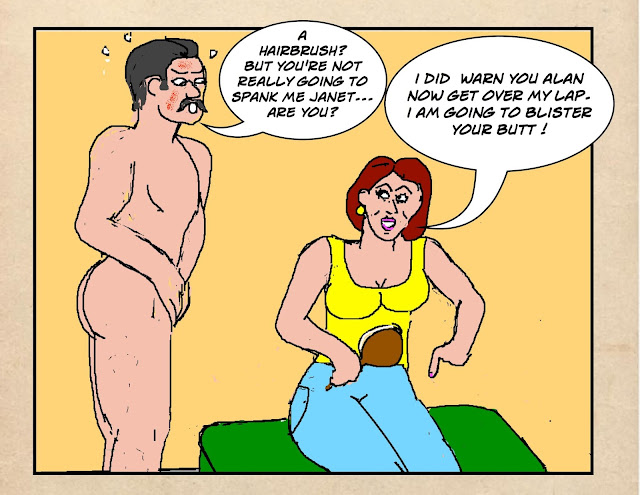 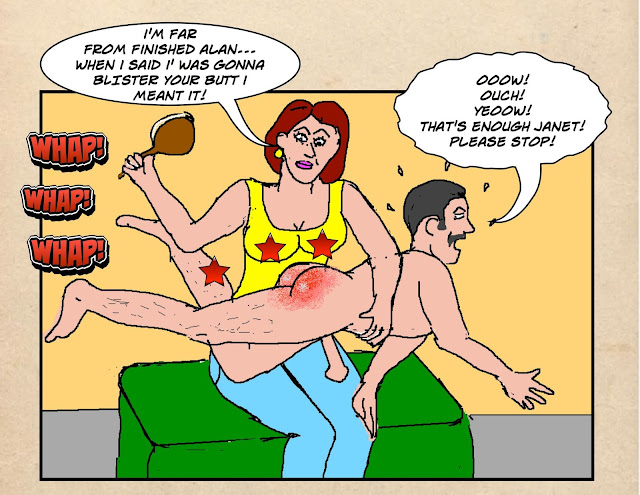 Mary has been naughty again and knows what her boyfriend Nigel will do , but still tries to convince him otherwise.
Nigel is committed to teaching her how to behave and believes a good spanking is the best lesson! 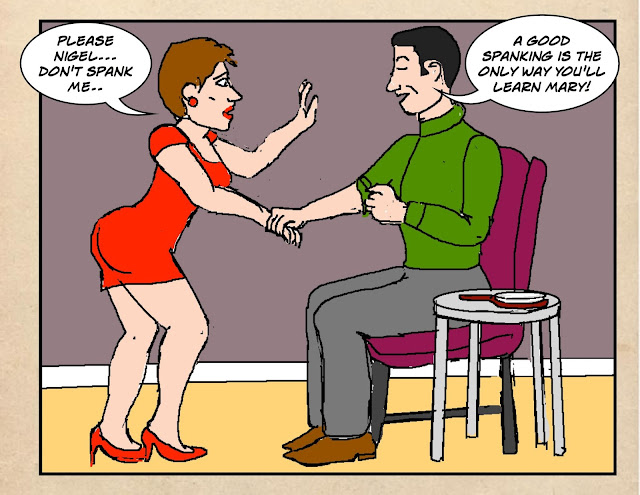 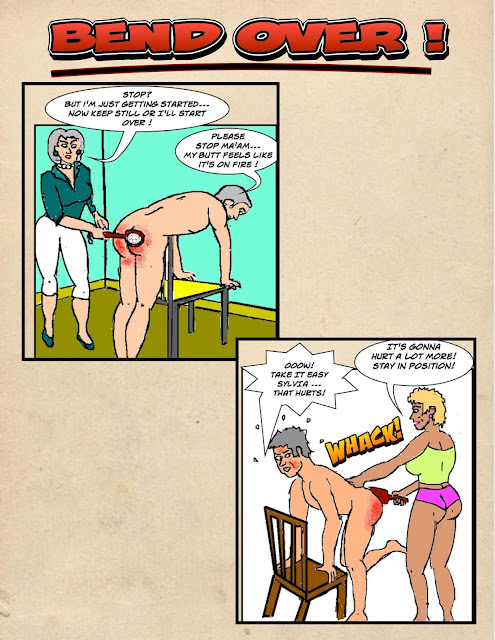 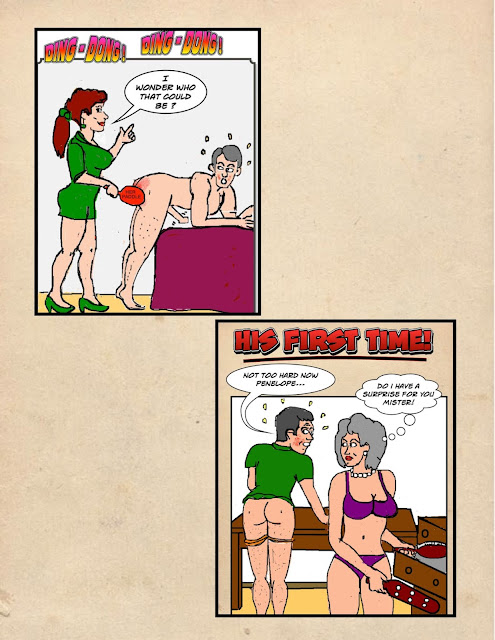 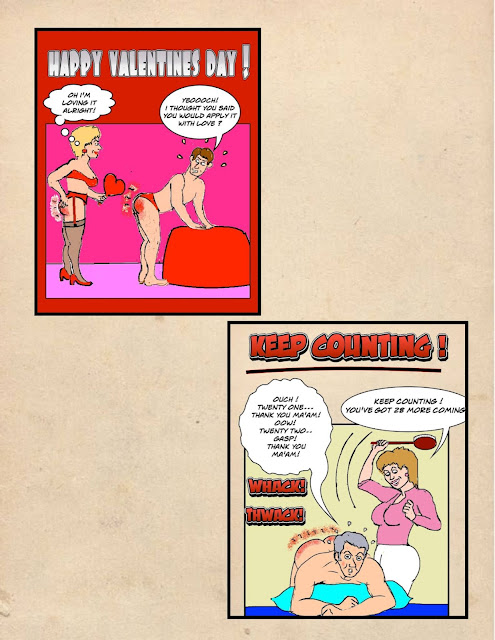 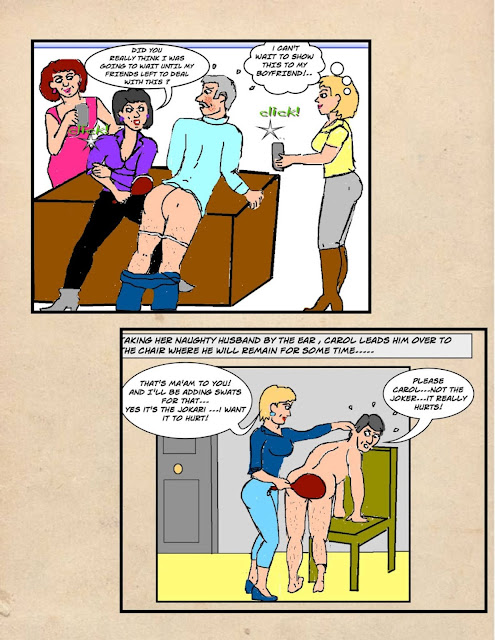 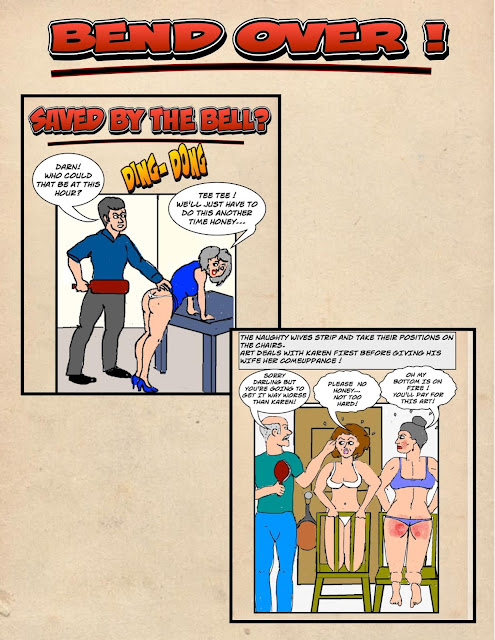 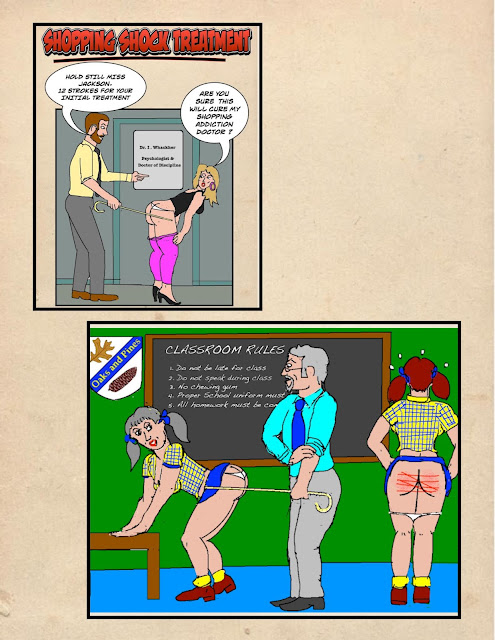 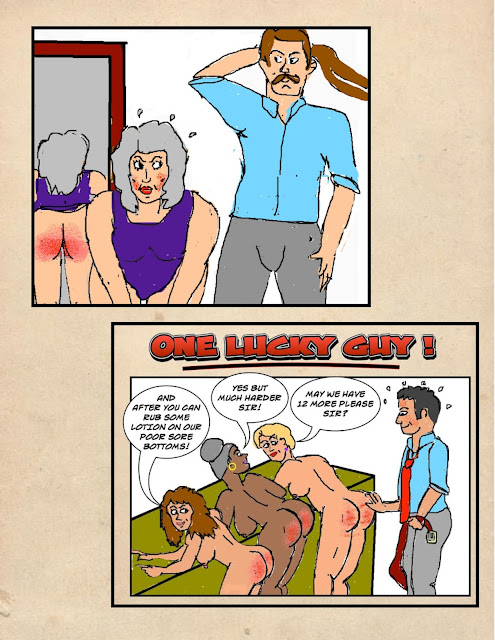 With a  short demonstration and little help from her Husband Bob , Susan recruits another member to the Disciplinary Wives Club ! 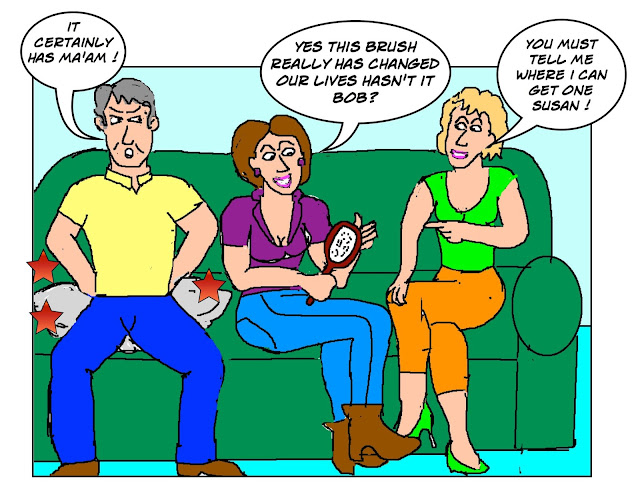 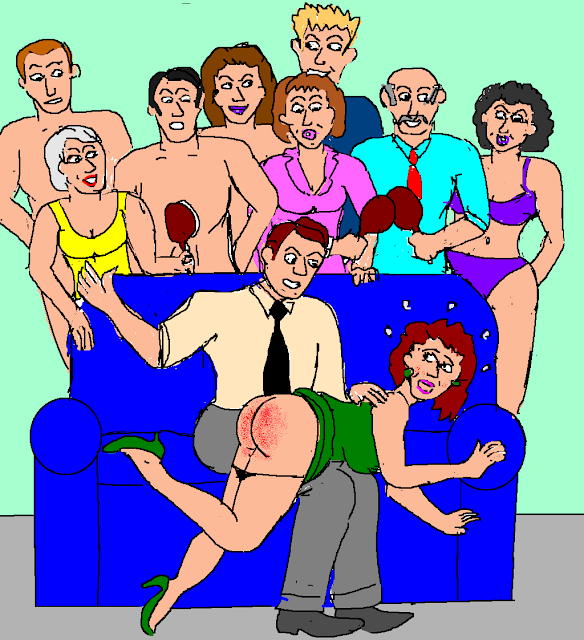 Paula  dug her high heels into the rungs of the wobbling ladder to secure her balance.
She much preferred her latest client had used a ground floor room to deal with their errant husband but she was more than willing to scale a ladder to take in the proceedings going on in the upstairs bedroom.
It certainly was worth the effort just  to see the surprised expression on a husband's face when they noticed her presence.

As she waited for the participants to arrive, she  tightened her grip on the window sill and was setting up her camera when she was startled by a male voice from below , "Enjoying yourself 'Peeping Paula'?"
Paula looked down to see a man in a trench coat and dark glasses standing with one foot on the bottom rung of the ladder. , "Who are you and what are you doing here ?" she demanded, albeit somewhat  nervously.

The man grinned and removed his glasses to reveal a handsome profile , "I'm Special Agent Paul , I've been following you for weeks....but right now I'm just enjoying the view!"
Paula gasped , "Pervert !" she exclaimed , realizing the man was able to peer up her skirt,  and she reached a hand back to pull her skirt tighter.

"How dare you!" Paula shrieked , the ladder wobbling dangerously from her sudden movements .
Luckily 'Paul' was there to steady it .
"I'm the pervert ? I'm not the one standing on a ladder peeping into somebody 's bedroom.....and if you are going to climb ladders you really should wear pants.....or at least underwear! Now are you going to come down or do I have to go up there and get you ?" he cackled.

"Go away ....I'm an agent working on a case ....and don't you dare come up here!" an outraged Paula said.
"Well if that's true , then you have some explaining to do , because I have reports of you peeping through windows all over the city. It took me this long to finally track you down.Now come down from there before you get hurt." Paul told her.

Realizing her cover , and her undies , were exposed , Paula looked around for an escape jus as her client , Jane Alcorn entered the bedroom .
Paula waved and gestured frantically for her to open the window.

However , mistaking Paula's waving  as excitement  , Jane simply waved back to her before turning her attention to her naked husband .
Poor Mr. Alcorn was shocked and embarrassed to see an attractive woman peering at him through the window but he was too busy being lectured by his angry wife to do anything.

Paula decided to open the window herself from the outside , and she almost succeeded , but her last push bounced the ladder back and she was now teetering on it precariously  while  Paul did his best to hold it steady and steer it and Paula back to the window.

Panicking , in the dim light , Paula saw what she thought was a bush within jumping range.
Gambling it would cushion her landing , she leapt athletically from the ladder while Paul looked on in amazement.
He heard a crash accompanied by anguished yelps from Paula , "Ouch ! Yeoow! Oh Shit!"
Rushing to her aid , he was relieved to find the naughty spy sitting uncomfortably in a thorny rose bush.
"Ooow! Ouch! Eeek! Well don't just stand there .....get me outa this thing !" she wailed .
Paul laughed at her predicament before offering a hand to scoop Paula from her prickly seat.

Paula winced and put a hand to the back of her skirt which had hiked up during her fall , causing her to  scantily clad bottom to take the brunt of the fall.
"Serves you right !" Paul chuckled.
"Ooooh......my butt feels like a pin cushion! " Paula whined.

Paul took a firm hold of her hand , "I'd be glad to inspect the damage for you?" he teased.
"I'll bet you would.....let me go!"Paula raged.
Paul shook his head , "Sorry can't do that Paula. You're coming with me !" he said dragging her along with him.
Paula could here the distinctive noises of a sound spanking coming from the Alcorn's open window.
"Can't I at least finish my assignment?" Paula reasoned.
Paul turned to her , "No you can't! You're busted peeping Paula and there are a lot of people waiting to see you get your comeuppance!" he scolded.

To her surprise , Paul let her inside the Alcorn's house and into the basement where a familiar group of spankers and spankees awaited.
Paul dragged Paula over to the sofa and tossed her effortlessly over his lap while the witnesses gathered around to watch the proceedings.
"What the hell do you think you're doing?" an indignant Paula protested.
"I would have thought that should be obvious 'Agent' Paula. I'm going to give you the spanking of your life and these folks are going to watch and enjoy seeing you get what you deserve....we just need to wait for the Alcorns!" he replied.

Paula struggled on her captor's lap but quickly realized it was futile .
"The Alcorns? You mean they are in on this?" she asked.
Paul smiled , "Yep...they are undercover agents who set the trap and you fell right into it!"
Just then a smiling Jane Alcorn arrived , hairbrush in hand and her chastened husband in tow.

"Ah! Welome Mr. & Mrs. Alcorn . Shall we begin?" Paul announced , raising Paula's skirt to reveal her shapely twin globes.
"What happened to her bottom?" Jane Alcorn giggled.
Paul examined Paula's bottom, "She had an altercation with a rose bush trying to escape ,but that is going to be the least of her problems by the time I'm done with her. Hand me that hairbrush pleased ....I'm going to need it !"

If you are going to ignore your Wife's 'Honey Do' list to go golfing , and then brag about it to your friends , don't ever think she won't find out about it.
This naughty Husband learns this the hard way , and instead of an afternoon of him swinging a golf club , it will be her swinging a bath brush against his bare backside!
Even worse than the spanking will be having to call his friend and explain why he can't golf with him! 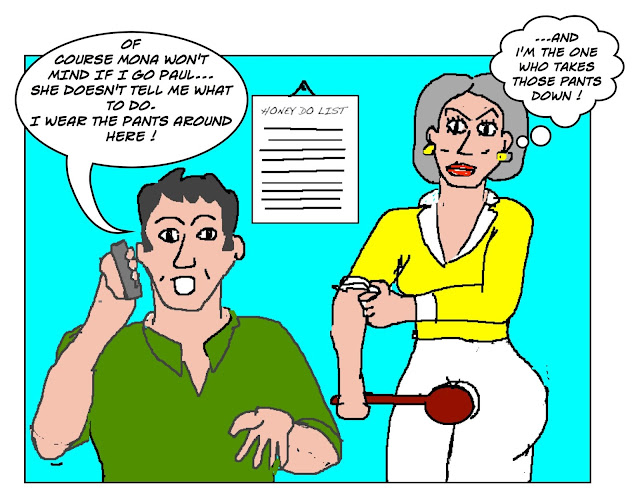 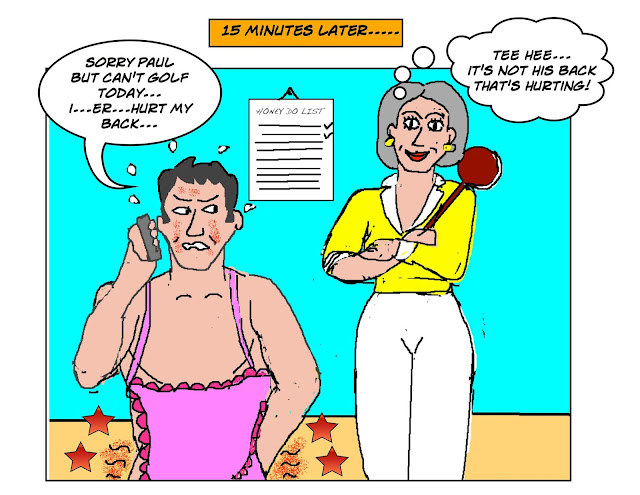