One of my favourite spanking artists is Phil over at

I have been following Phil's work since he began back in the days of  the old yahoo groups and it remains some of the best spanking art still around.
Phil is in poor health these days , but still heroically shares his posts on his blog and I'm glad to see he is still posting recently.
One of Phil's many skills I admire is how he depicts the female bottom before , during and after a spanking , and shows how it becomes redder as the spanking progresses until it almost lights up the screen in the most vivid redness you could imagine.
Here are some of my favourites where Phil shows that red female bottom showing through sheer panties. A difficult task indeed for any artist but Phil nails it!
If you enjoy these , go over to Phil's blog for more , and make a comment of thanks and appreciation for his work.
He deserves it.

Arm secured and bottom nicely positioned to receive the paddle , her cute lily white bottom encased in a pair of sheer panties . It is only her face that is red at the moment but that will change....... 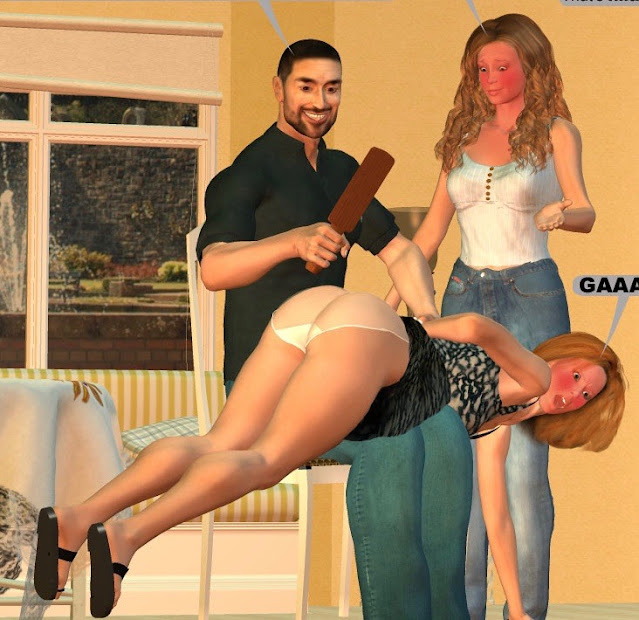 Raising her skirt a little higher to reveal the low cut , sheer undies and when she feels the paddle on her scantily clad cheeks she is genuinely worried.... 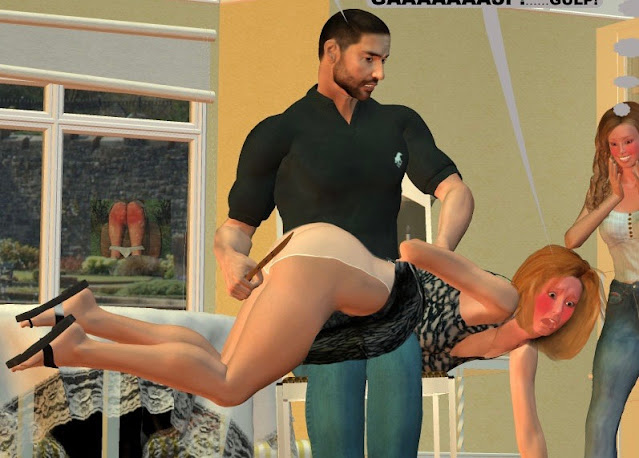 Only a few swats in and the paddle is taking its toll , a nice red blush visible through the sheer material and those legs are kicking ! 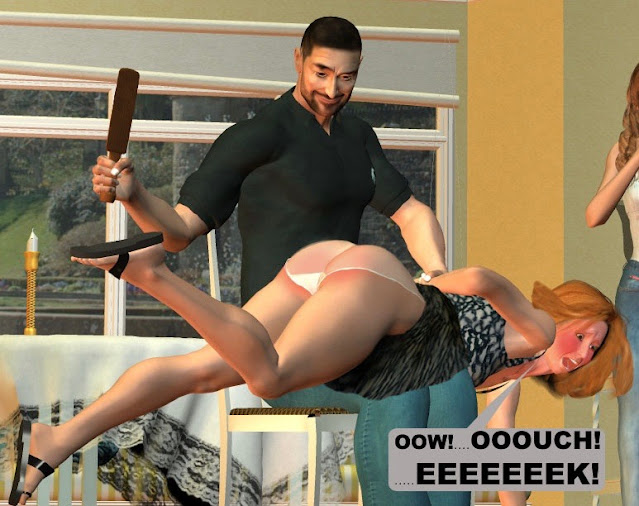 A nice shot of those twin globes as they get redder by the minute , and she cannot resist a look over her shoulder to see just how red those cheeks are.

He seems to be really enjoying himself now ! 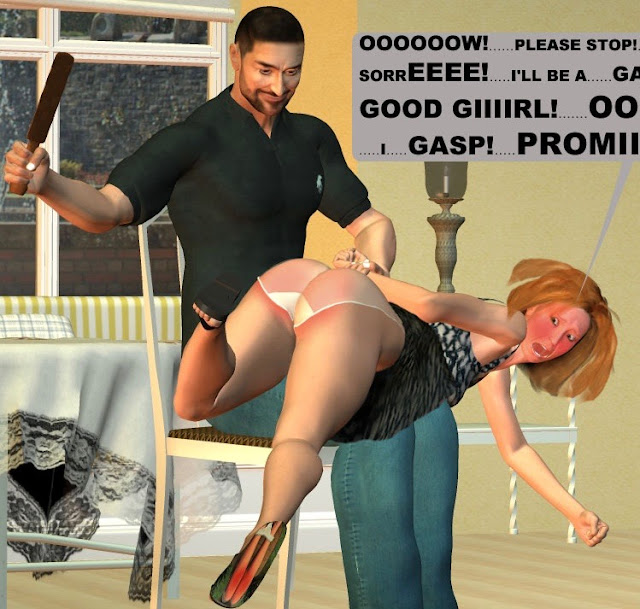 Almost finished and those cheeks are a bright red now, as if the panties did not exist . Her kicking is rather undignified now but she doesn't care ! 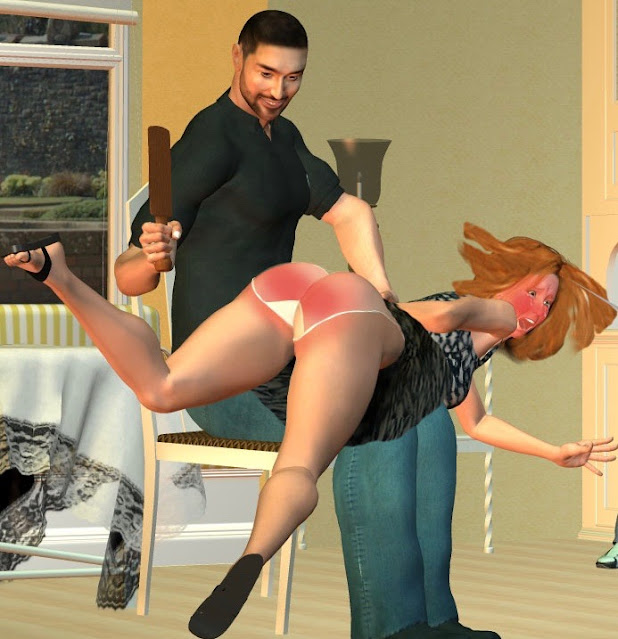 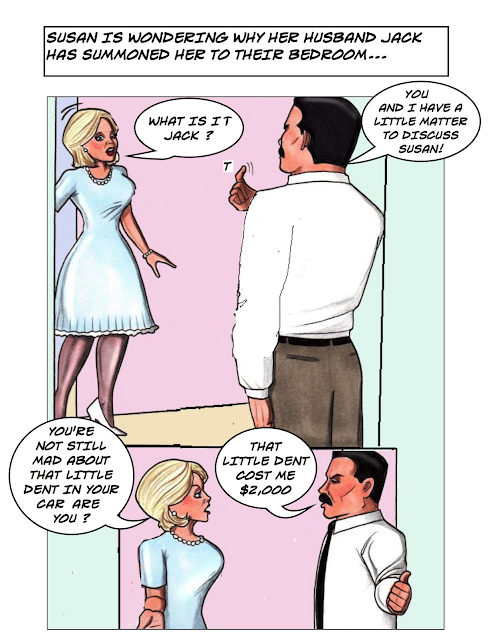 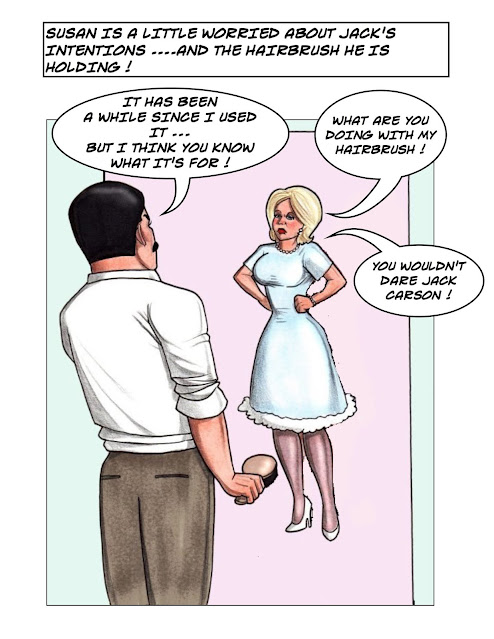 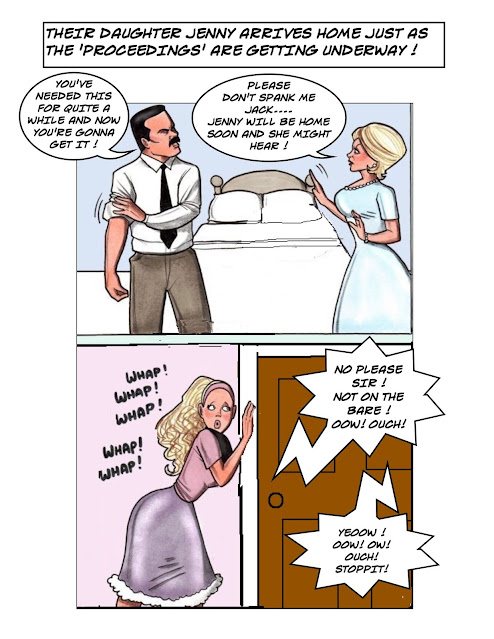 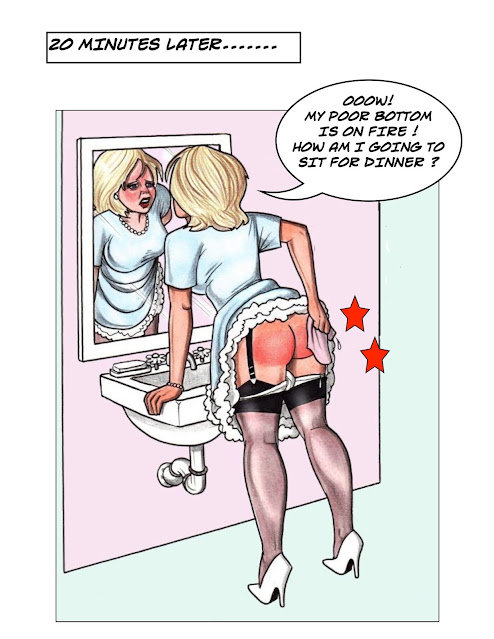 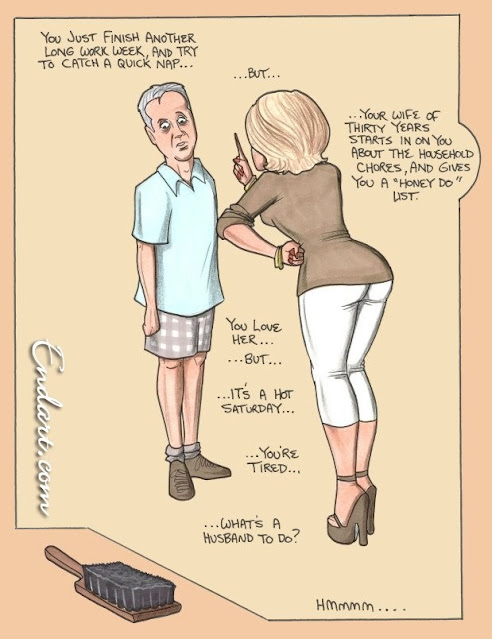 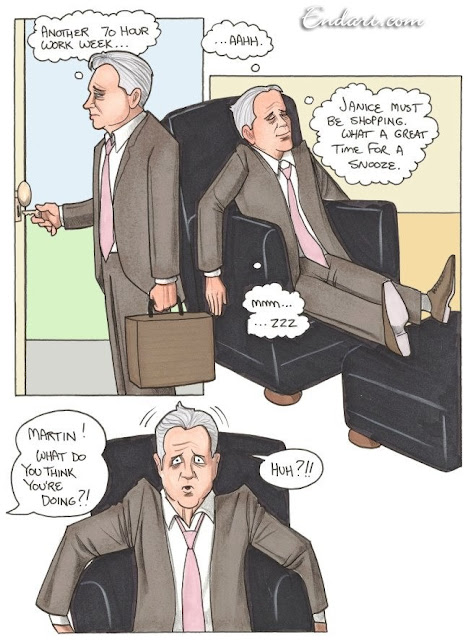 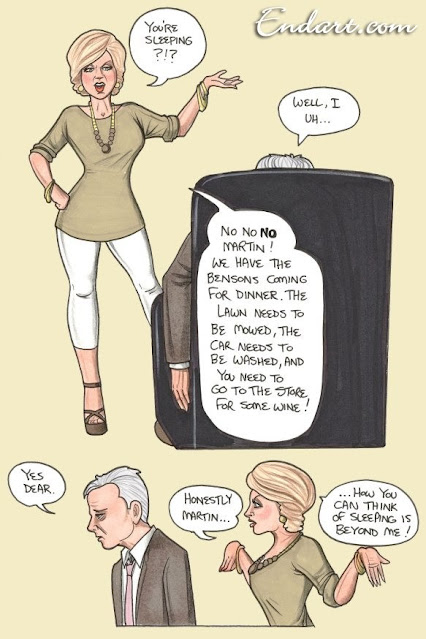 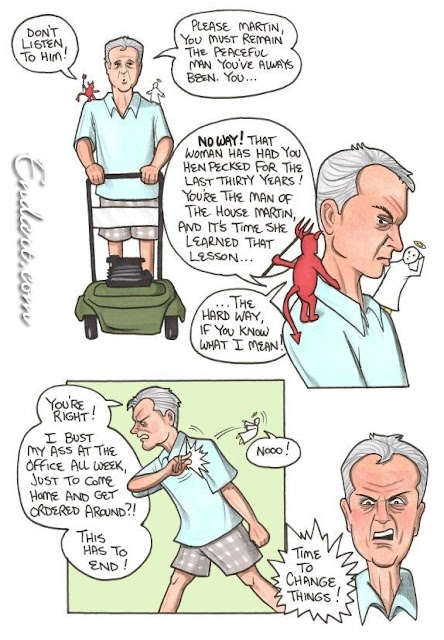 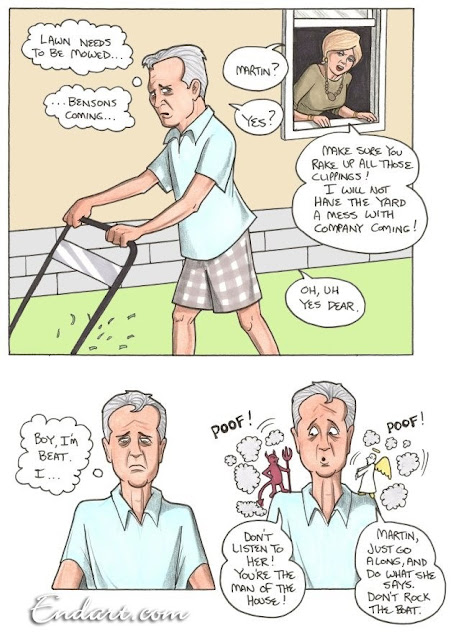 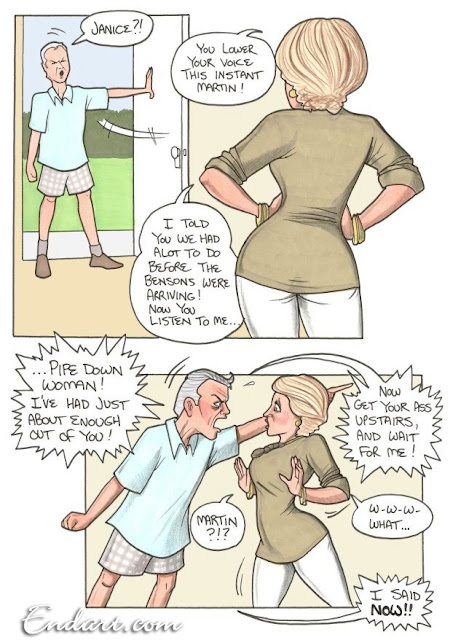 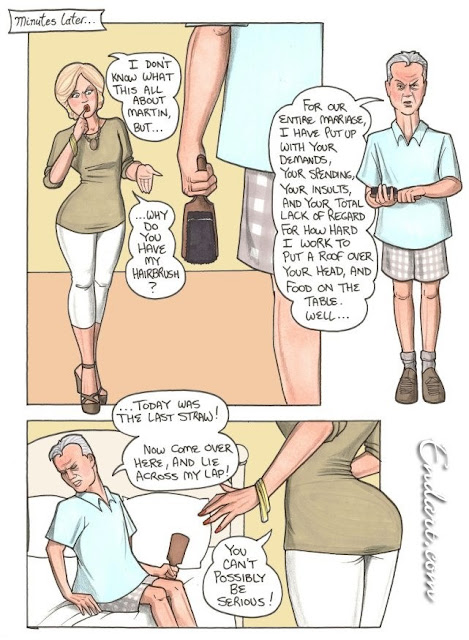 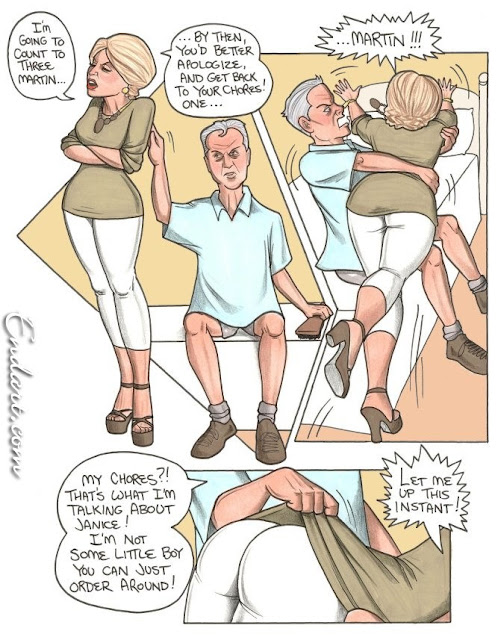 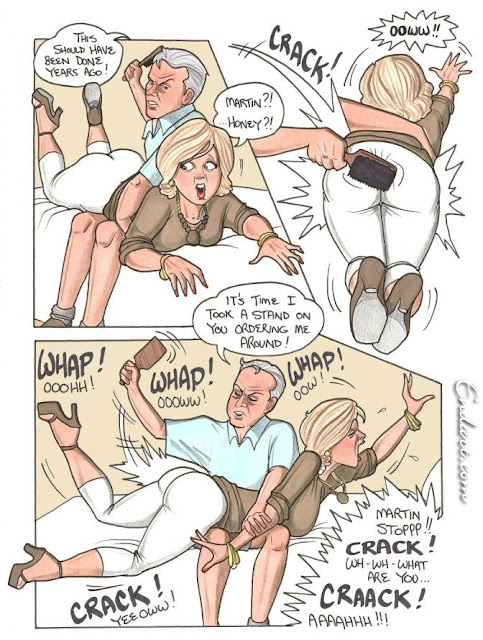 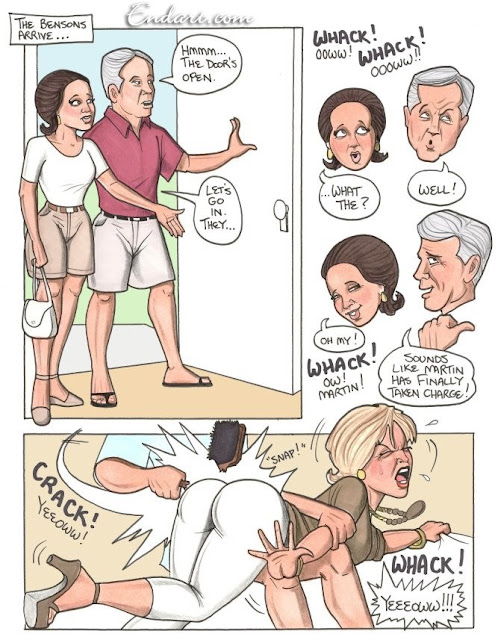 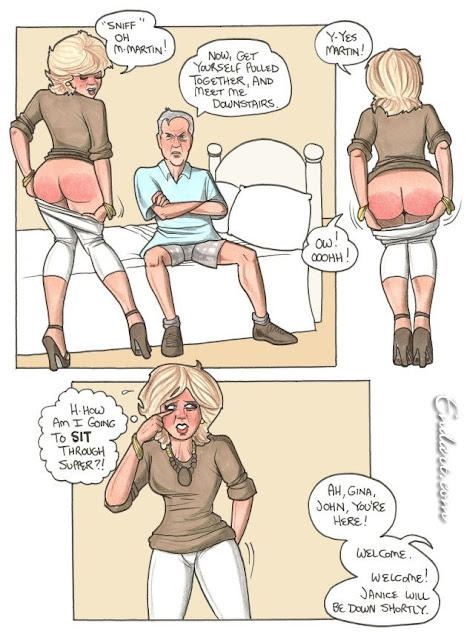 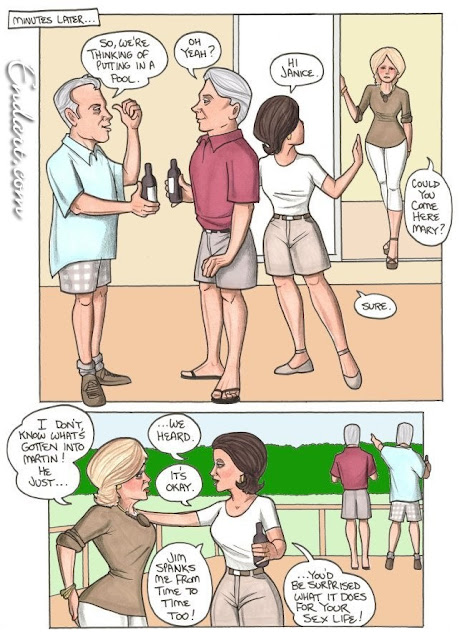 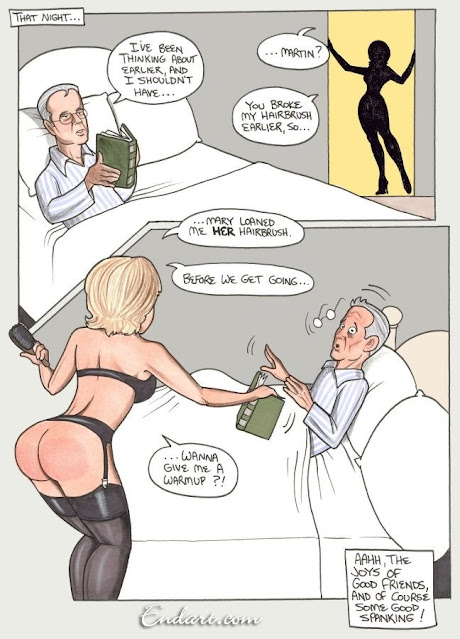 Unfortunately his site closed abruptly a number of years ago , although much of his work can still be found at various sites , it is too bad that the entire Endart 'collection' appears to have been lost to us.

This is one of my favourites , not just for the story line , but because it features an older couple .....and of course because Janice does have a very spankable bottom and really deserves it .....a bit like McLintock!

My favourite frame is the final one where Janice's spanking 'conversion'  is complete .

A Cure for ' Irritable Husband Syndrome' !

We may not have s cure for COVID 19 yet , but most Wive's have a ready made cure for the 'Irritable Husband Syndrome' which results from spending all this extra time alone with Hubbie.

Of course this won't be a 'discussion' in the true sense of the word , as you and your Hairbrush will be doing all the talking , and his only contributions will be lots of "OUCHES!","OWS!" and "YES MA'AMS!"

The 'Discussion' will be a welcome release for you , leaving you with a satisfied glow , and  leave a certain part of HIS anatomy with a lingering and burning glow of a different kind !

Above all , stay safe , have fun , and keep on spanking Ladies! 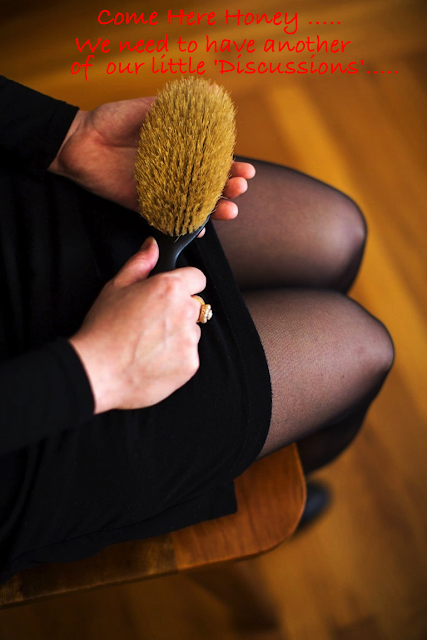