Brenda & Gavin enjoy movie nights with her Mom and Dad.
However , the ladies believe their men are being too demanding so decide to teach them a lesson,
Unfortunately for Brenda and her Mom , the guys end up getting the last laugh and all they end up with is watching the movie sitting on very red bottoms! 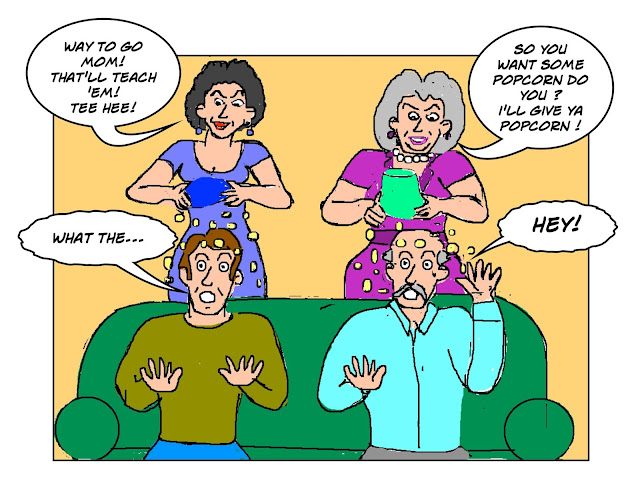 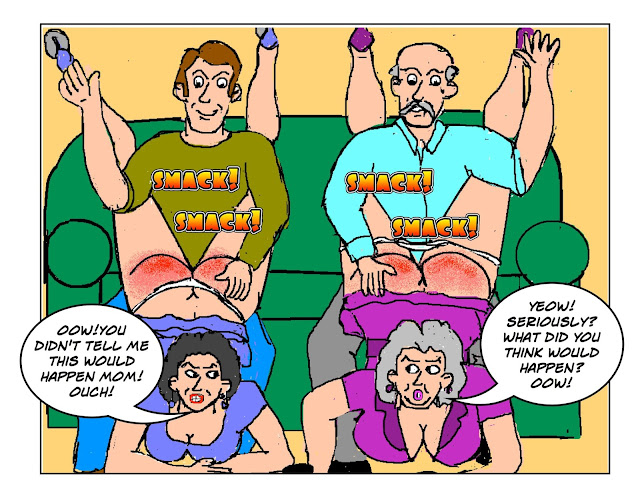 When a new Wife asks her Mom how to change her new Husband's attitude , Mom is more than happy to provide her with a solution  that has worked for her for years ! 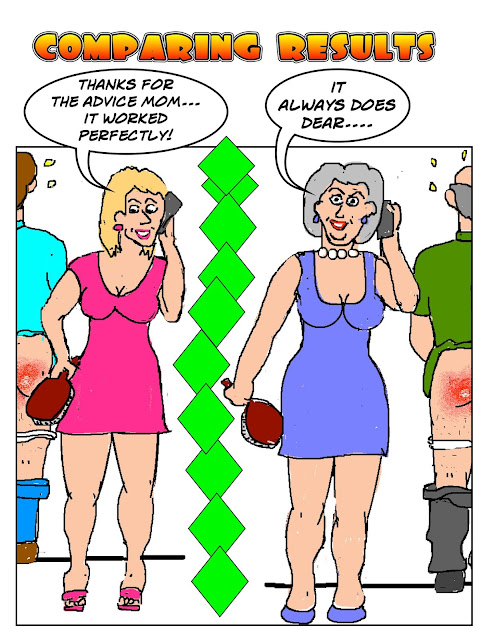 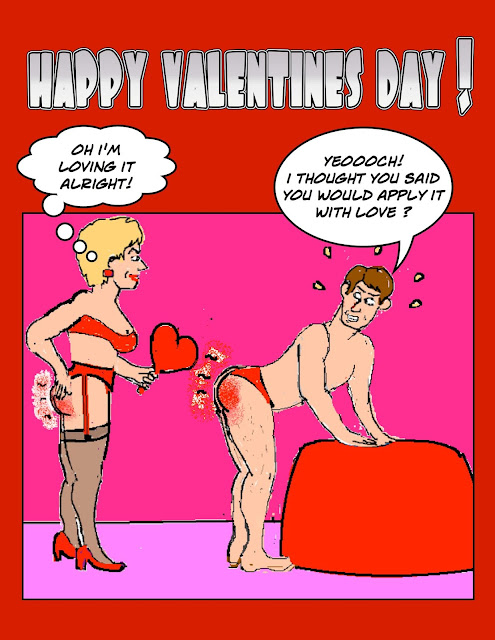 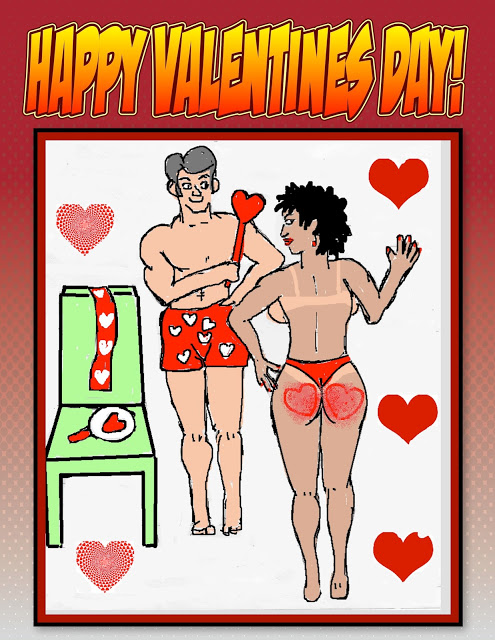 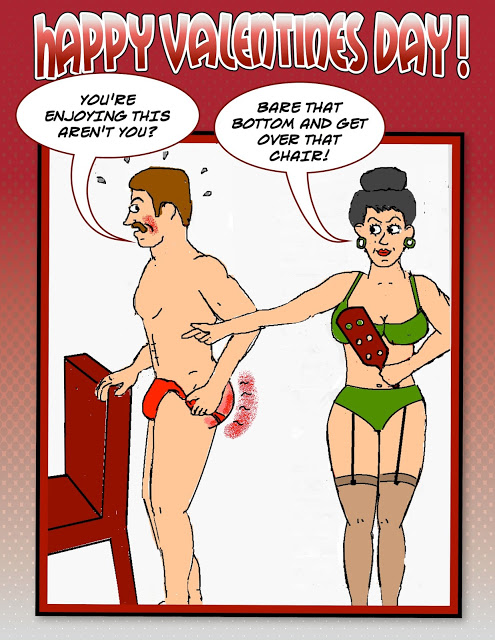 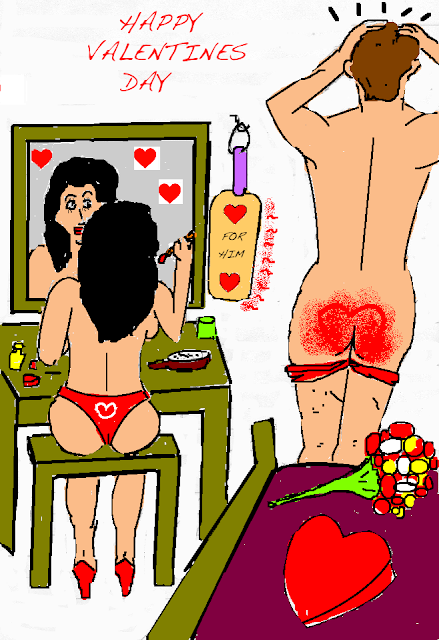 When a new Wife receives a good spanking from her Husband her first reaction is to call her Mother to complain and ask for advice.
Mothers are well placed to offer advice ....especially when they have received a spanking also ! 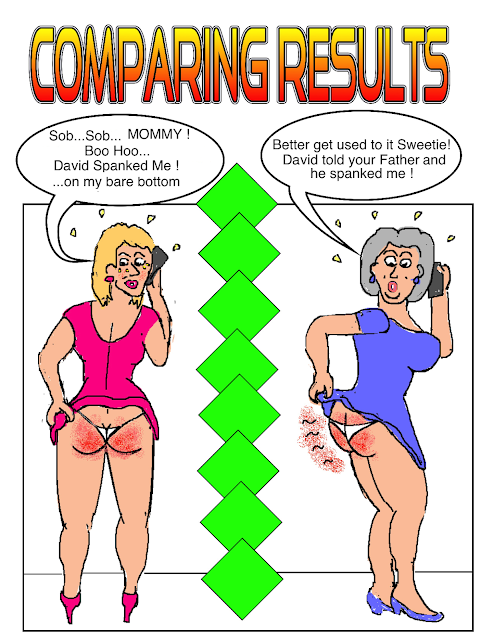 Carl and Tom told their wives they were working late last night , but in fact they spent most of the evening at a strip club near their office.
Both men were quite sure their unsuspecting spouses would never find out about their little escapade , but did not know that their eagle-eyed ladies spotted Carl's car in the strip club parking lot as they drove home from a shopping trip.
(...that ought to teach Carl not to drive a bright yellow roadster convertible which is kind of hard not to notice!)
Tom is genuinely concerned when the girls 'summon' their naughty husbands for a discussion. 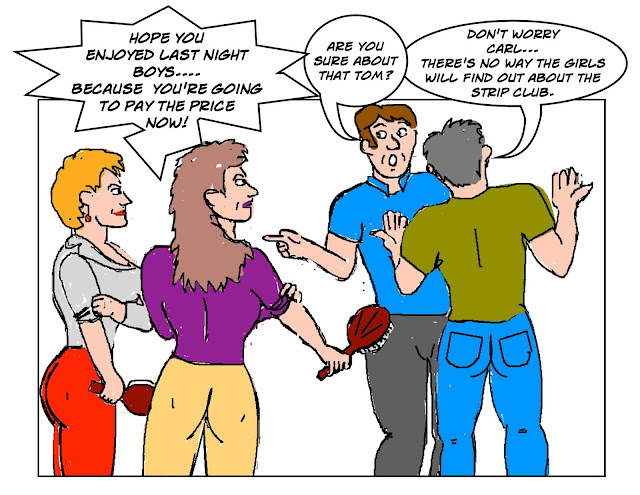 Ron knows his naughty wife Sandra doesn't always keep her promises , so sometimes he needs to add a give her a little extra incentive to remind her.
She will be reminded of this promise each time she tries to sit for the rest of the evening..... 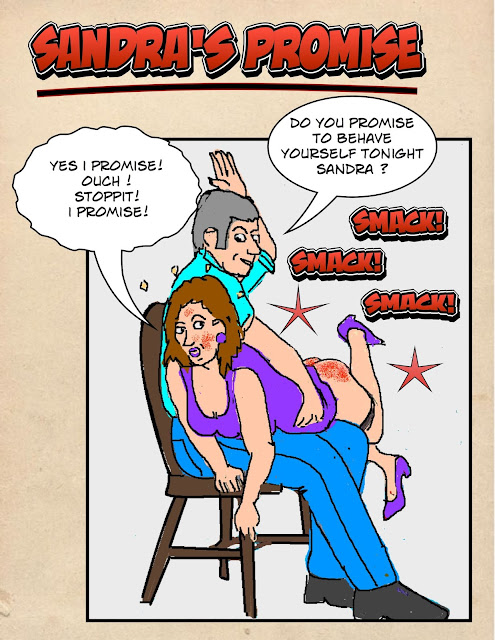 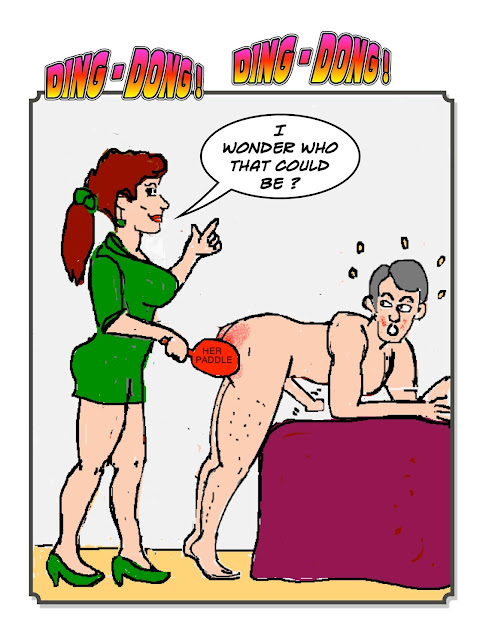 'DING-DONG!'
"Saved by the bell!" Colin grinned  when he heard the doorbell ring.
"Get in there and wait for me...." Sharon ordered , steering him towards the bedroom ,"....I'll see who it is."

With her red paddle still in her hand , Sharon opened the door.
"Lynn!" she exclaimed with surprise,  seeing her good friend and neighbour.
"Just remembered I forgot to return this baking pan you lent me a while ago..." Lynn said.

Sharon invited her friend inside ,  the big red paddle still conspiciously in her hand.
"Did I come at a bad time ?" Lynn asked with a smirk , eying the paddle.
Sharon hid a giggle by putting a palm to her mouth,"Oh not at all.....I was just about to have a little discussion' with Colin when you rang. .....but he can wait a while."

" I can come back Sharon...I wouldn't want to get in the way of a little domestic discipline ." Lynn chuckled.
"Don't be silly.....it'll do him good to wait while we  have a coffee."

While the two friends chatted at the kitchen table , Colin stood naked in the bedroom impatiently awaiting his wife's return.
He recognized  Lynn's voice, explaining Sharon's delay.
So , assuming Lynn's arrival had earned him a reprieve ,  he dressed and made his way to the kitchen to join the ladies.

"Oh hi Lynn !" he chirped nonchalantly, pretending to look surprised.
What did surprise him was that  the big red paddle sat openly on the table .
"I don't recall giving you permission to leave the bedroom Colin?" Sharon asked firmly .
"Well no...but I thought with Lynn being here that...." he began , hesitating to continue.
"....you thought I wouldn't blister your backside while she was here ?" his wife asked.
Her Husband was stunned to silence , his  face flushing red .
Sharon  continued , "....well you thought wrong didn't you? Now get back to the bedroom , get undressed and get in position. I'll be along when I'm good and ready !" she added.

Lynn watched the exchange between the couple with great interest , impressed by Colin's compliance to his wife's commands.
With a "Yes Ma'am!"  he disappeared down the hallway.

"So what did he do this time ?" Lynn asked , looking at the paddle.
Sharon refiled their coffee cups , "Oh he's been snippy with me since he got that new job , so it's about time I laid some serious wood to his backside. Besides...it's a real stress reliever for me too!" she added.

While the two friends continued their conversation , in the bedroom a naked Colin was bent over the bed.
He felt like he had been standing there for hours even though it was only a few minutes.
"Can we get on with this Sharon?" He finally called out impatiently.
"See what I mean Lynn ?" Sharon sighed , "Help yourself to more coffee while I go deal with my naughty boy." she said , rising from her seat and striding purposefully to the bedroom.

Colin was immediately apologetic upon seeing his wife's stormy demeanour , "I'm really sorry Sharon .....YEOOW!" he yelped when a hearty smack connected with his bare backside.
"You know better than to speak to me that way....especially with Lynn here! Get your head down and butt out...this is going to be bad!" she scolded.
"Yes Ma'am!" Colin replied in s high pitched tone, adjusting his position to meet his wife's specifications.

'Ding dong!'
With the paddle about to fall , the door bell rang again.
"Darn who could that be now?" Sharon sighed ," Don't you dare move mister....I'll be right back.
Colin exhaled with relief as his wife left the room.

Once again , with paddle in hand , Sharon opened the front door , this time to find her sister Kate waiting.
Like Lynn , her gaze went directly to the big red paddle.
"Sorry I'm late Sharon....did you already start?" Kate asked.
"Not yet ....actually your timing is perfect Kate. He's all set up and ready for us!" her sister replied with a grin.

Kate entered and was surprised to see Lynn waiting in the kitchen .
"It's OK Kate.....Lynn knows all about it !" Sharon explained.
"I'm looking forward to the show !" Lynn chuckled with a wave,
The two sisters rolled up their sleeves and strode down the hallway , while Lynn moved her chair closer and sat back.

The bedroom door closed , and for a few seconds there was only silence ... and then :
'WHAACCKK!'
"YEOOW!"
The loudness of the sound ,accompanied by Colin's earnest yelp shocked her.
Another one soon followed:
'WHAACCKK!'
"YEOOW!"
Lynn counted out a full 25 swats delivered non-stop to a howling Colin before there was silence again.
She could hear Sharon and Kate speaking sternly , with the occasional unintelligible response from Colin.

Another 25 loud whacks promptly followed , echoing  from the bedroom with more  frenzied yelps , apologies and pleading from Colin.
"Wow! They're really giving it to him good!" Lynn said to herself.
A final series of 20 swats were delivered, slowly and methodically and Lynn could hear Colin count out each one until finally "Ooooow! T...ttt....Twenty ! Thank you Ma'am!"

There was another brief pause and Lynn assumed the show was over .....until she heard more smacks , rapidfire this yime and unlike the ones she had heard before.
They sounded like skin on skin , but whatever they were , they produced a lot of bawling and wailing from Colin !

In her mind , Kate pictured the scene in the bedroom , Colin draped over his formidable sister-in-law's lap , his arm pinned back while Kate's  palm danced smartly all over his tight ,muscular rear quarters.

After a few minutes , the only sounds were  Colin's distressed sobbing and whining.
Shortly , the bedroom door opened and the two sisters appeared , grinning and glowing with satisfaction.
"Phew! That was quite a workout....I need a drink!" Kate announced , plopping into a chair next to Lynn.
"Good idea ! Lynn?" Sharon nodded , holding up a bottle of Chardonnay.
"Why not? I want to hear all about it..." Lynn responded , sitting at the table ,
"Colin! We're ready to be served now....get in here!" Sharon called out.

Moments later , Colin appeared from the bedroom ,walking rather stiffly  , head down , his face contorting in and out of a grimace and both  palms gingerly rubbing the seat of his denims.

As he neared the group of ladies  , Lynn noticed his face was a bright red and his eyes watery.
Without prompting , he opened the wine bottle and poured each of the ladies a glass.

"Good boy ! You can have a seat and join us Colin." Sharon told him.
Her Husband hesitated , looking at her contritely.
"I told you to sit down Colin!" his wife repeated in a stern tone, showing absolutely no sympathy for his obvious discomfort.
"If it's ok I'd prefer to stand...." he replied meekly .
Sharon raised a brow and glared at him, " Pardon me?"
"I would prefer to stand Ma'am?" he added .
"No you may not stand Colin.... I told you to SIT !" Sharon barked at him.

With a loud sigh , Colin agonizingly lowered himself onto the harsh wooden chair while the ladies looked on in amusement.

Wincing , Colin raised himself up just enough to slide both hands under his thighs to elevate his sore bottom.
"I can see what you're doing Colin! Put those hands on the table!" Sharon ordered.
"OOOW!" , Her husband moaned , his face contorting again when his sore rear pressed into the harsh seat.

"What's the matter  Colin? Is your little bottom too sore to sit?" Kate teased , producing hysterical giggles from Lynn and Sharon and reddening her brother-in-law's face even more.
For the next 10 minutes , Colin squirmed silently at the table whiles the ladies chatted and finished their wine.

Kate rose from the table and gave her sister a hug , "I'd better get going ....tomorrow at my place at 3?" she asked.
"I'll be there sis!" Sharon replied.
"Don't bother ringing , Frank will be all ready for us in the bedroom. He's been a real  lazy grouch lately so he deserves the same as Colin!" Kate cackled.

Lynn's jaw dropped , "Is this a regular thing you guys do?" she asked.
Sharon smiled , "Every third weekend....regular as clockwork...isn't that so Colin?"
Colin stared at the table ,muttering a subdued "Yes Ma'am." In response.

A thoughtful smile played on Lynn's face , "Sooooo.....that means you won't be needing that paddle for a while....would you mind if I borrowed it ?" She asked.
"Of course you can....it's about time you got a paddle of your own girlfriend! You're going to wear this one out on Rodney's backside at this rate....just make sure you bring it back !" Sharon said , handing over the paddle.

Later that day , Lynn was about to give  her husband Rodney a dose of Sharon's red paddle when:
'DING-DONG!'
Lynn answered the door,  the red paddle still in her hand.
"I thought you might need a helping hand Lynn?" Sharon asked.
A broad smile played on her friend's face , "I sure could ....come on in !"