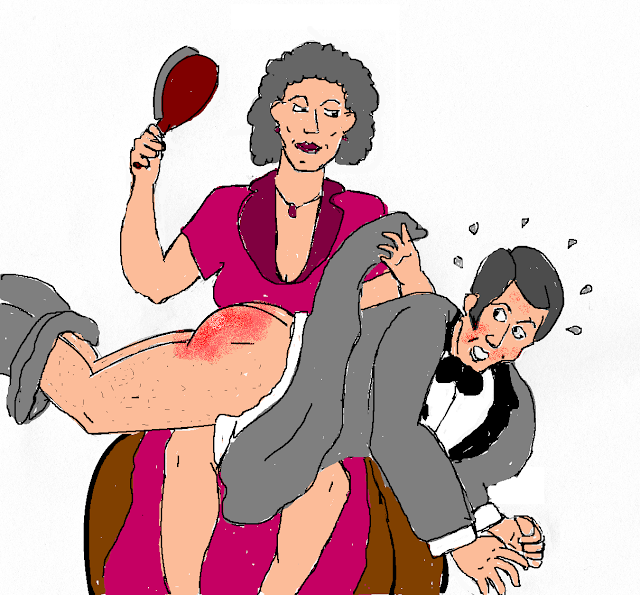 Lord Reginald Chumley looked warily across the room at the delectable Doctor Florence Davenport.
She looked even more stunning than usual in her long fuscia evening gown which hugged her curves and had a teasing split at the back to give a glimpse of her shapely legs when she moved in her usual elegant manner.

The young Lord Chumley was hosting his first Charity Gala at Chumley hall with all the important people  in the County attending.
He knew the desirable Doctor Davenport had received an invitation , but given the way she had spurned his previous romantic attempts, he was not expecting to see her.

He was still reeling from his previous meeting with her which had ended in the most embarrassing fashion :

For once in his life , the brash Playboy lacked the confidence to ask Florence for a dance so he spent the evening wallowing in jealously as other men spun the beautiful Doctor around the dance floor and she flirted openly with all of them.
As she danced , she would cast Reginald a glance , almost challenging him to approach her , but he could not summon the courage.

Even liquid courage didn't help and when he downed his 3rd whiskey in a row he felt a hand on his shoulder and a female voice , "As your Doctor I really must advise you not to drink like that Lord Chumley."
Doctor Davenport's deep , seductive voice had Reginald spitting out his expensive single malt.
Florence regarded him with a devious smile.
"I wanted to congratulate you on a wonderful event Lord Chumley. The fundraiser will really help at the hospital......but I must say I am a tad disappointed that you haven't ask me to dance." she told him.

Reginald was intoxicated by her mere presence and struggled to speak.
Sensing his embarrassment , Florence took his hand  , "Why don't we dance while we talk your Lordship." she said and lead him onto the dance floor.

It felt wonderful for Reginald to finally take this strong willed woman in his arms , smell her perfume , put his arm around her tiny waist and spin her around the floor.
"Oh My! You are quite the dancer your Lordship. You are making me quite giddy!" Florence gushed.
Regaining confidence , Reginald dipped her and then pulled her closer , "Please call me Reginald....may I call you Florence ?" he asked.

The confident Doctor allowed her breasts to brush against him , "You may call me Florence for this evening but I insist on Doctor Davenport at my surgery......" she began.
"Of course." Reginald concurred.
".....and you will call me Ma'am when I am disciplining you!" she added firmly , her smile fading momentarily.
Reginald blushed and swallowed heavily.

When their dance ended , the couple finally seemed to have some romantic spark between them.
Florence stunned Reginald by reaching up and planting a brief but teasing kiss on his lips.
"This is a wonderful old building. I'd love to see more of it..." Florence cooed.
Reginald smiled , "Let me give you a private tour Florence !" he replied , taking her arm .

As they approached the big staircase , Reginald's housekeeper Mona greeted them.
"How are you Mona? Still busy keeping our naughty boy in line are you ?"Florence asked , producing a deep blush from Reginald.
Mona grinned from ear to ear.
"I certainly am , isn't that so Reginald? The poor boy simply hates that leather strap. Can't sit down for days after a dose of that can you Reggie? " she teased.
Florence laughed along , "....but what about Betty Blister?"she asked.
Mona cackled , "Don't worry Doctor , it still sits in Reginald's bedroom just in case!"

Reginald anxiously guided his guest up the stairs to avoid any further embarrassing comments from Mona.
They both stood for a moment at the top of the stairs to admire a portrait of Reginald's parents.
"What a beautiful couple they make!" Florence observed.
Reginald nodded agreement , "Yes. They were a good team. Father ran the business but Mother was the one in charge of all the domestic matters!" he explained.
"She looks like a strong willed woman!" Florence observed.
"She certainly was Florence . In fact I must confess that 'Betty Blister' belonged to her!" he confessed with a smile.
"Really ?" Florence replied.
"Curiously , she never used it on me or my brothers , it was reserved exclusively for Father!
She gave it the name Betty Blister thinking we kids wouldn't know what she was referring to but we figured it out.
If he did something to displease her , which was often , she would say things like, "Betty Blister is waiting for us in the study" , or "I've invited Betty Blister over for a visit later".
Father would turn bright red and begin apologizing but it never worked.
Once Mona had put us to bed , we would sneak downstairs and listen to Father howling and apologizing while Mother blistered his behind with that brush!
The next morning at breakfast he could barely sit and would remark that his old war wound was playing up again! Mother would giggle and say 'I didn't know you were wounded on that part of your anatomy darling!' . We kids would giggle at that one!"

The two strolled along the long halls while Florence took in what Reginald just told him about his parents.
"This is my bedroom.....of course you've been here before...for my ...er....examination." Reginald said.
"....and there is Betty Blister , just where Mona said it would be !" Florence observed ,picking up the big brush and rolling it over her hand.
Reginald blushed again.

Florence sat on the big leather ottoman at the foot of her bed and hoisted up her gown to reveal her long , shapely legs.
Reginald's eyes widened at the sight.
Looking up at Reginald , Florence said , "It's a very expensive dress and I don't want to crease it while you are kicking and squirming on my lap Reginald." she declared.

Reaching out , she nonchalantly began to undo Reginald's trousers and yanked them down to his knees.
"Over you go Reggie darling!" she announced , patting her bare lap.
Reginald shrugged his shoulders , "But what for ? I didn't do anything Florence ..." he protested.
Florence cast him an angry glare and waved the brush at him.
"This is when you call me Ma'am Reginald . Let's start this relationship off in the right way shall we?" she scolded.
"Yes Ma'am." he replied and crawled over her inviting lap.

This newly married husband is determined that marriage will not change him and he is determined to continue his wild bachelor lifestyle.
His best buddy Jack has been married for a while and advises that he had better change his ways before his new wife does it for him.
Jack knows from experience the powers of a disciplinary wife , but his newlywed friend stubbornly resists his advice and brags to his friend using a very ironic analogy.....
Unlike the Tiger , the stripes he will be soon be wearing will be an angry red , and applied to a particularly embarrassing area of his anatomy which will render him reluctant to sit for the next few days ! 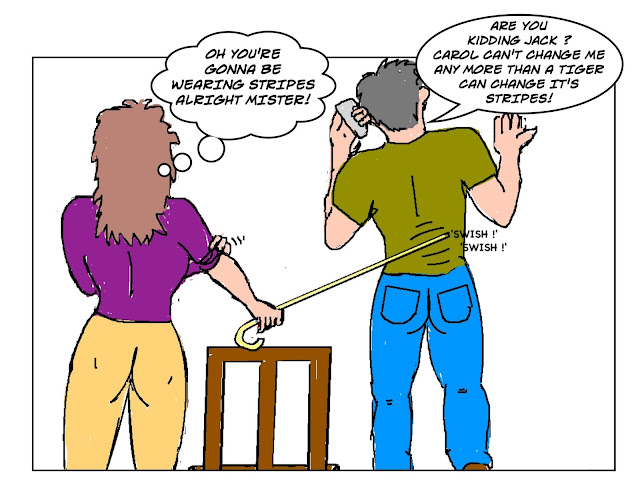 After a darn good spanking from her boyfriend Clint , Jennie was somewhat reluctant to attend the big Barn Dance given that her choice of dress would expose her glowing , chastised appendage for all to see.

Follow this link if you missed it.
Look What You Did !


When Clint called all his Rodeo Cowboy buddies to explain the situation , they quickly came up with a solution.
As it turned out ,  Jennie felt right at home when she saw that all the other gals at the dance , not only had well-spanked bottoms like her , but were quite proud to display them for all to see!
Their men were quite happy too , knowing that those shapely posteriors would need another warming by the time they got home..... 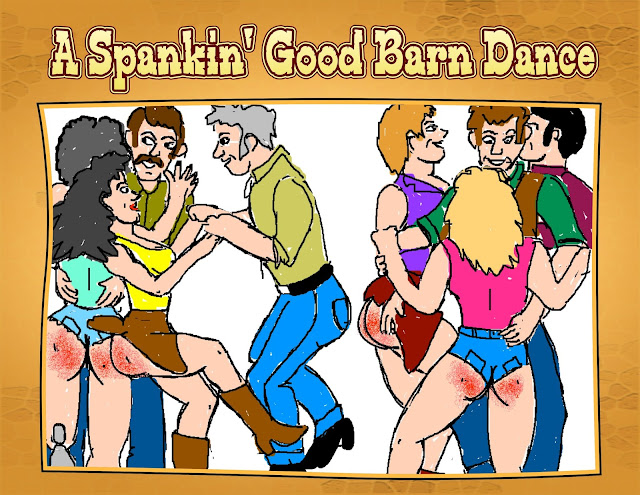 He Deserves it ! - FM Spanking Cartoon

It looks like this naughty Husband has earned himself an epic spanking !
After enduring his Wife's paddle and hairbrush ,  the sight of the leather belt has him pleading for leniency.
He should know that a Strict Wife offers no leniency , just severity , and she will happily remind him of why he is in this position in the first place ...... because he deserves it ! 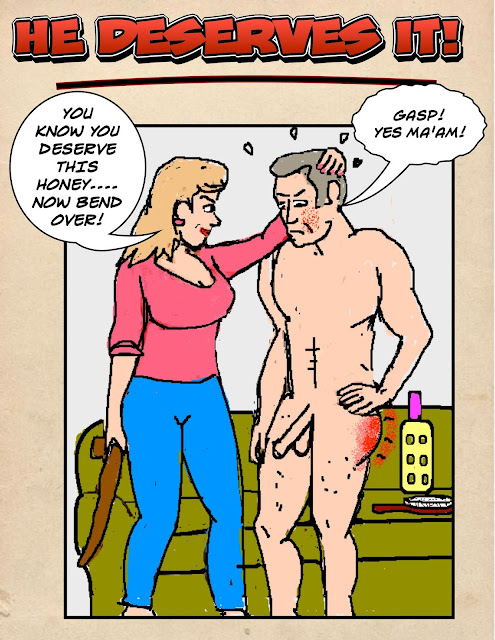 You can't blame a Strict Wife for wanting to show off her well trained husband to her friends.
After all , it was all her her hard work that made him the perfect husband.
Of course , once her friends discover the power of the hairbrush , they just can't wait to try it out for themselves! 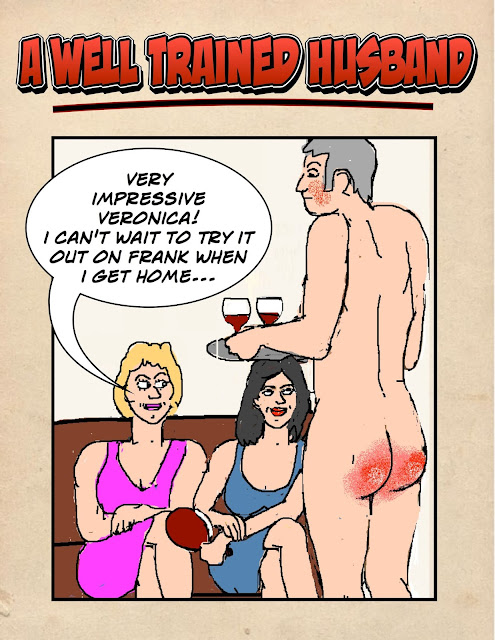 If anyone knows which movie this is from please let me know.
It is one of my favourite spanking pics and the fact it is set in the wild west makes it even more precious.
I just love the way she is draped over his lap , gripping onto his leg , and the way those bloomers frame her perfectly spankable bottom.
It's like the opening curtain on a stage show!
Her bottom is so pearly white it appears her spanking has not yet begun .
He looks like he means business so it won't be white for long ! 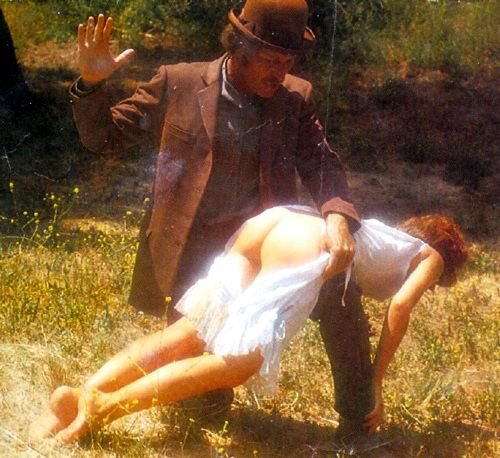 It was meant to be two couples having a quiet dinner together but this pair of naughty husbands could not behave themselves.
So instead of dessert , their strict wives serve up a double dose of the paddle to make sure they would not be sitting comfortably for the next few days.
It's bad enough bending over for a bare bottom paddling from your wife-in front of another couple - but knowing you will be going over her friend's lap for another paddling makes it way worse.
I expect these two husband's will be on their best behaviour the next time they go out! 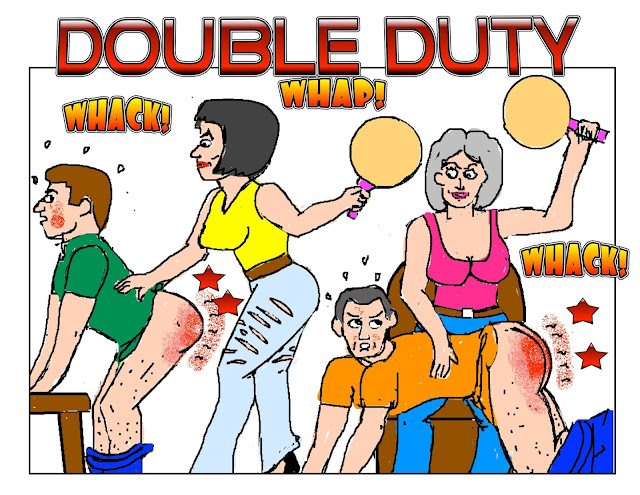