One of my favorite spanking writers and artists is Underling .
I especially like his stories which deipict a spanking being carried out 'offscreen' but overheard by others.
My all-time favorite is his "Sore Losers" story which you can check out with the attached link: 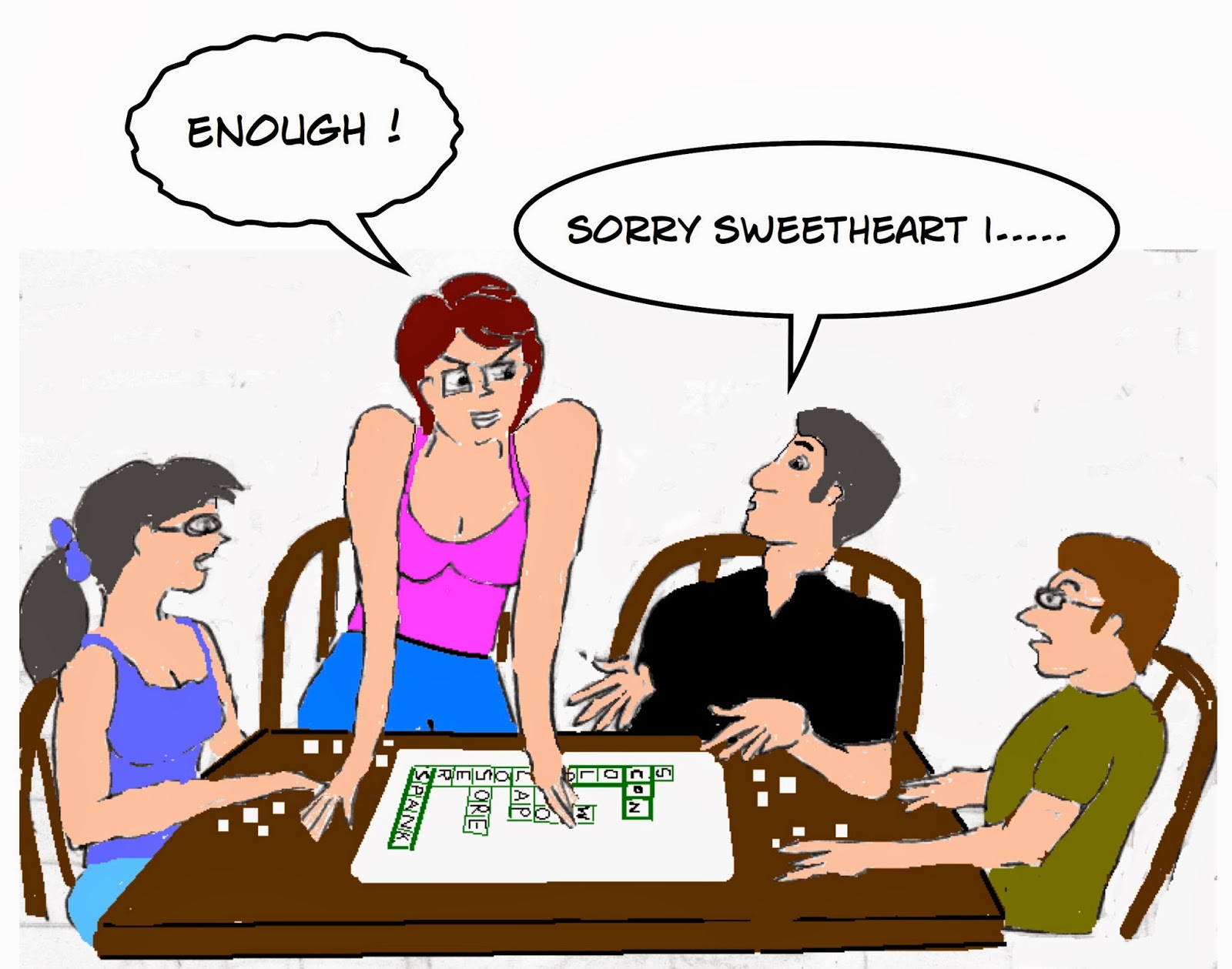 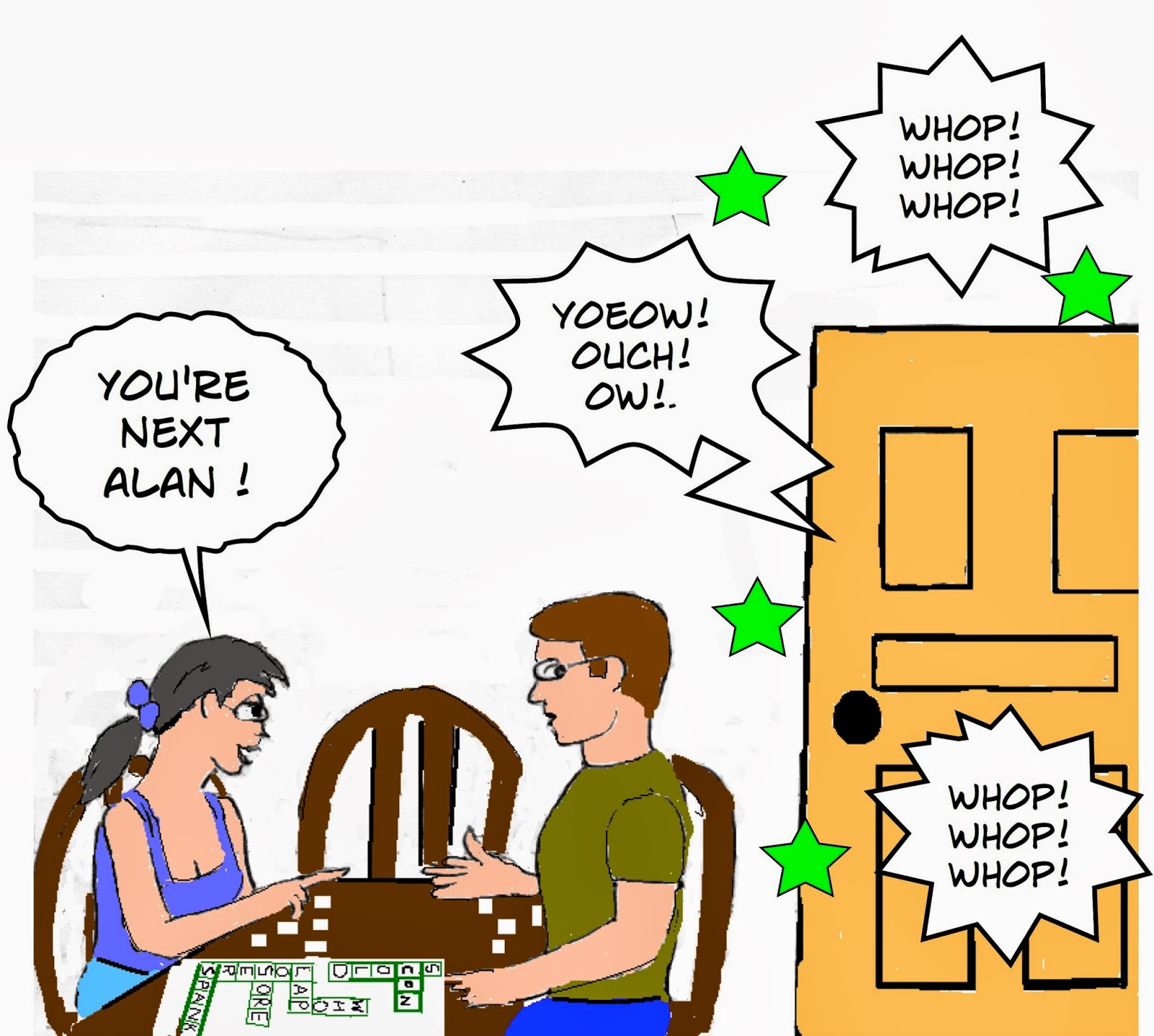 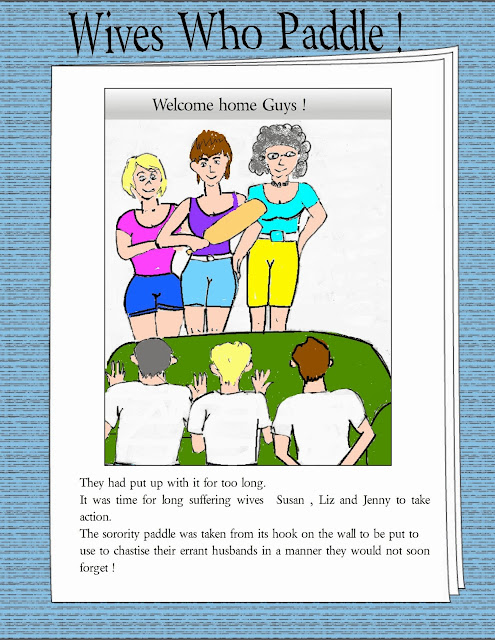 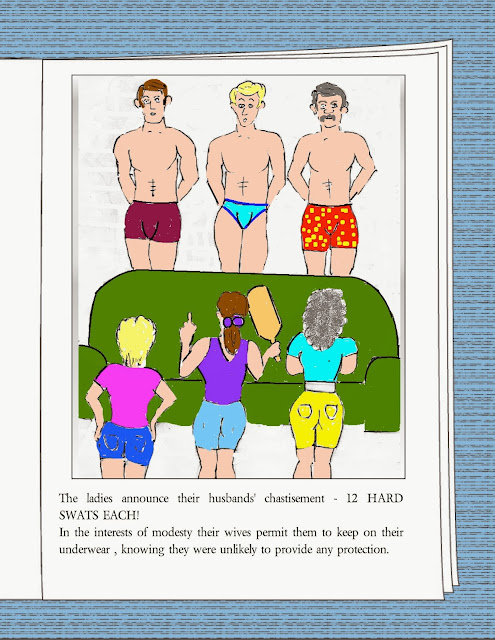 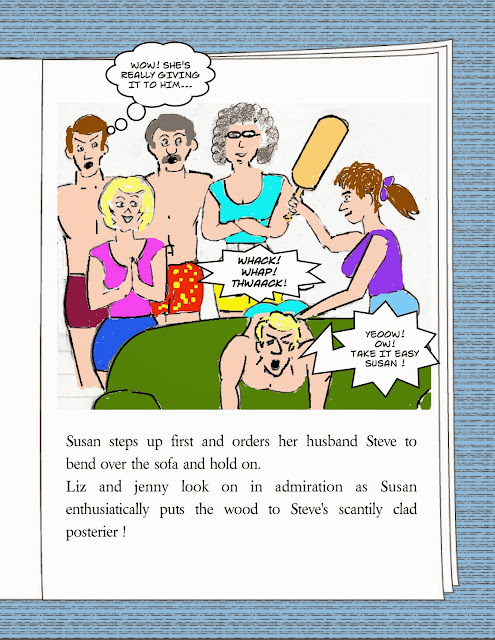 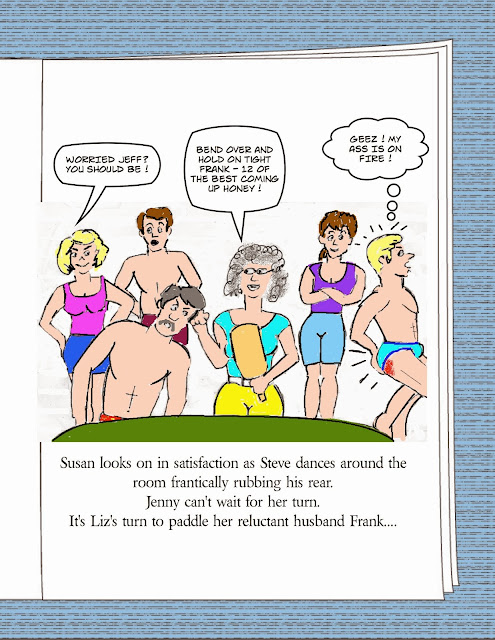 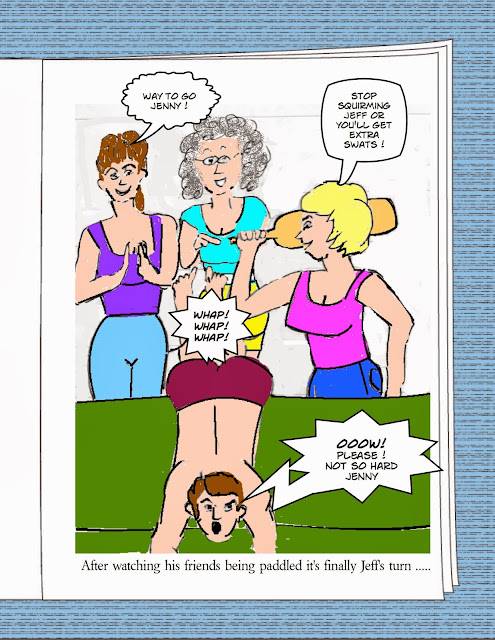 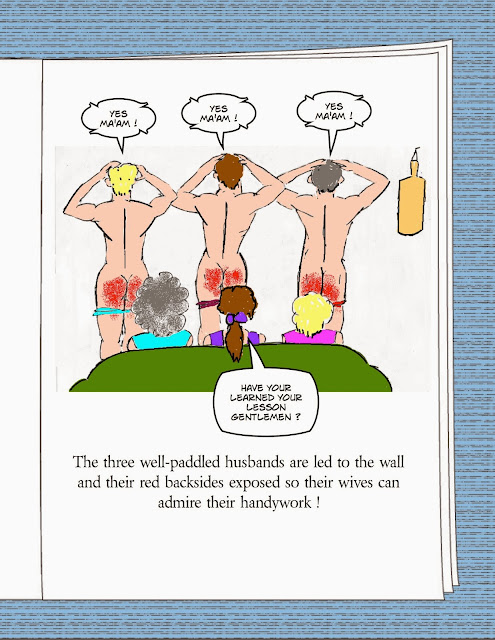 Some of you may recall my post during the Canadian Thanksgiving in October featuring the spanking adventures of a newlywed couple visting her parents for the holiday!
However , I did receive a few comments about the ending which left the situation somewhat in limbo , and upon re-reading it I can understand why.
Actually this is just an aspect of my story-writing approach so you should expect more of it unfortunately.
However , as we now have the US Thanksgiving upon us I decided to let the story continue and land where it may!
As you may recall , we left our Newlyweds in the basement of Nancy's parents' house with her parents listening at the top of the stairs to Nancy giving her husband Jeff a well deserved dose of her hairbrush...............


‘WHAP!’ ‘WHAP!’ ‘WHAP!’ ‘WHAP!’ ‘WHAP!’ ‘WHAP!’ WHAP!’ ‘WHAP!’
“OOOOOOOW!” “YEOOOW!” “I’M SORRY HONEY!” “OOOOUCH!” “PLEASE STOP!”
Nancy delivered a series of really hard swats which even made Janet cringe.
“WOW she’s really giving it to him good!” Gerry exclaimed.
Janet grinned , “Well Nancy told me that Jeff’s had it coming for over a month….so it’s his own fault!”
Gerry looked at his wife incredulously.
“Well that’s fine for you to say  Janet….you’re not the one getting your bare butt roasted with that darn hairbrush…..have you any idea how much it hurts and how hard it is to sit afterwards?”
‘WHAP!’ ‘WHAP!’ ‘WHAP!’‘WHAP!’ ‘WHAP!’ ‘WHAP!’
“WAAAAH!” “GAAAAAAWD!” “OOOOOW!”
They  both cringed again before Janet responded.
”Oh my…Poor Jeff!.....Of course I know how much it hurts dear….I’ve blistered your bottom enough times to know that…..anyway,  the only way to get through  your  thick head is to tan your hide so you’ll remember it when you sit for a few days!”
Gerry put a hand to the seat of his pants and nodded “Well you certainly got through to me honey!”
Janet giggled “ I sure did ….and,  by the sound of it , our daughter is doing just as good a job on Jeff! You two are going to need pillows to sit for breakfast tomorrow!”
”
…..‘WHAP!’ ‘WHAP!’ ‘WHAP!’…..”Am I getting through to you yet Jeff?”
“AAAAH!” “YESSSSSSS!” “OOOOOW!”
‘WHAAP!’ ‘WHAAAP!’
“OOOOUCH!”
“Yes What Jeff?”
“YES MA’AM!”
“Good boy! Now ….you have 10 more coming ….and I want you to count and thank me for each one!”
“YES MA’AM!”
“That’s better. Let’s bring this to a conclusion shall we ? Hold on Jeff!”

‘WHAAAP!’
“OOOOOW! ….WO…WO…WON THANK YOU MA’AM !”
‘‘THWHAAAAP!’
“WAAAH! ….TE..TE..TOOOO…TH…THANK YOU MA’AM !”
‘WHAAAP!’ ‘THWHAAAP!’ ‘CRAAACK!’
“AAAH! ….OW! …OW! …..THU..THREE THA..THANK YOU MA’AM! ..FFFFOUR THANK YOU MA’AM !”‘CRAAACK!’“Please try to keep up with your count honey…..it would be a shame if I had to start over wouldn’t it?”
“Sssssss…..OH! Please honey…..not so hard!”
“Don’t you dare tell me how hard to spank ! Now did you hear what I said young man ? How many is that?”
“SSSorry Ma’am ! That would be 6 Ma’am!”
“Four more to go then dear….I suggest you hold on tight!”
‘WHAAAAP!’“YEOOOW! SEVEN THANK YOU MA’AM!”
‘WHAAAP!’ ‘TWHAAAP!’“GAAAAAH! SHIT ! EIGHT…..I MEAN NNNNINE…THANK YOU MA’AM!”
“Really dear! If you’re going to have this much trouble counting , perhaps I should have you bend over for a baker’s dozen with the strap after we’re done?”
“NO! I MEAN NO MA’AM….I’M SORRY…REALLY SORRY!”
‘CRRAAAAACKKK!’
“WAAAAAH ! GAAAAAWD! TEN! THANK YOU MA’AM!”
“Now get that naughty bottom in the corner before I DO decide to get the strap!”
“YES MA’AM!”
Janet supressed a grin when Jeff hobbled into the kitchen for breakfast.
Positively glowing , a cheery Nancy followed him in and gave her Mom a big hug.
“Good morning Mom!”
Raising a brow, Nancy stared at Jeff who , through a grimace, mumbled a greeting to his mother-in-law .
“JEFF?” Nancy scolded.
Her husband forced a smile “ Good morning Mrs. Blackwell .” he said with more clarity , avoiding eye contact.
“Mom!” Janet corrected .
Jeff looked at his wife before replying.
“ Good morning Mom!”
“Sit down and make yourself comfortable Jeff. Breakfast will be ready in a minute.” Janet smirked.
Jeff looked at the big soft pillow on his chair.
Janet grinned “…..well as comfortable as possible I hope…”
Her son-in-law’s face turned red with embarrassment upon realizing his mother-in-law knew he had been spanked.
“GERRY ! GET DOWN HERE! BREAKFAST IS READY !” Janet hollered .
Very carefully , Jeff lowered himself onto the pillow beside Nancy who was already comfortably seated.
“Don’t be such a big baby Jeff ! It can’t be that bad ?” she taunted.
Jeff shifted around on the pillow in a vain search for comfort before rising from his seat.
“Thanks for the pillow Mrs. Bla….I mean Mom….but if you don’t mind I’ll stand!” he asked meekly.
Just then he felt a comforting hand on his shoulder.
“Don’t worry son….I’ll be doing the same! My back is killing me ….is yours sore too ?”
Nancy giggled and Janet shook her head in disbelief.
Folding her arms confidently, she addressed the two men.
“Let’s be open shall we guys ?
Both of you got a well-deserved spanking….. so it’s understandable that you’d prefer to stand …..
but you’re both going to be sitting for breakfast…am I clear ?”
Jeff looked to Gerry for guidance and the older man nodded.
“Yes Ma’am.” He replied. “Yes Ma’am.” Jeff repeated.
Despite  a lot of moving around and squirming , the two sore husbands were able to finish breakfast seated with their wives.
“How about a game of golf Jeff?” Gerry offered and Jeff readily agreed.
“Ahem !” Janet cleared her throat.
“Sorry to burst your bubble guys. I appreciate that the pair of you would like to spend the day doing something that doesn’t involve sitting but I’ve already booked the four of us on a winery tour!”
Gerry’s face looked like it was about to explode.
“Dammit woman! You know I hate those stupid tours….and all that sitting on a bus !”
Bouyed by his father-in-law’s bravado , Jeff piped out.
“I’d prefer golf over a wine tour ….perhaps we can do that another time?”
The two wives were momentarily shocked to silence , but quickly regained control.
“Jeff ! How dare you be so ungrateful! Mother has paid for and planned this tour weeks ago so you’re going !”
Putting both hands up in an act of defensiveness Jeff tried to respond.
“……but Nancy I was just being honest honey….” He babbled.
“Don’t you ‘honey’ me Jeff! After last night I……” Nancy replied before her Mother intervened.
“Let me handle this if I may honey?” Janet asked , her tone capturing the attention of the room.
She peered sternly over her  thick rimmed glasses at the two men.
“Here’s the deal guys. OK have it your way…go golfing …. Nancy and I will go shopping…..with your credit cards !......and I hope you enjoy your game because you may not enjoy dinner at the restaurant this evening ….once I’m done with the pair of you !”
Both men paled and their jaws dropped.
Janet continued.
“Both of you will receive 12 stokes of my cane before dinner gentlemen !”
With that , Janet boldly thrust her hand out.
The two men looked confused.
“Credit cards please gentlemen!” she barked.
Gerry and Jeff dug into their pockets and handed their cards to Janet who smiled broadly.
“Let’s go shopping Nancy!” she chirped triumphantly.
***********************************************************************
As they set to tee off at the 18th and final hole , Gerry and Jeff began feeling a little uneasy.
“Last hole before we have to go home and face the music son !” Gerry said in an upbeat tone.
His son-in-law shuffled his feet anxiously.
“Janet…I mean Mom…isn’t really going to…..” he began.
Gerry swung and watched his ball sail through the air .
“I’ve been married to Janet for 30 years Jeff and if there’s one thing I know about her its that when she says something she ALWAYS follows through!” 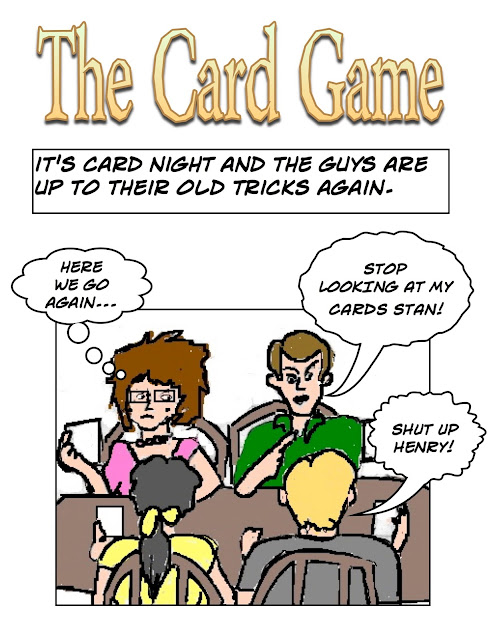 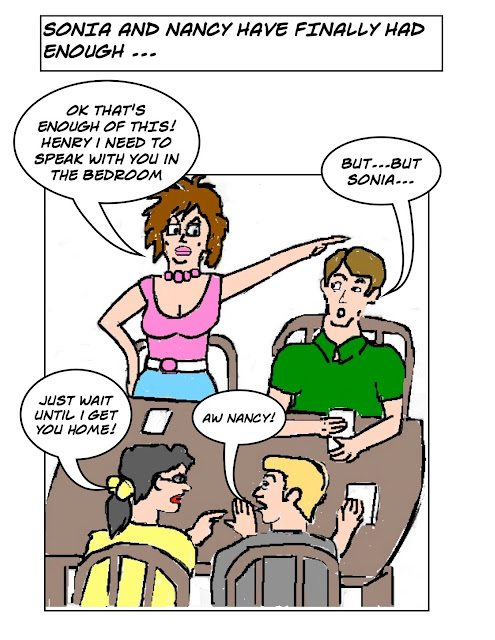 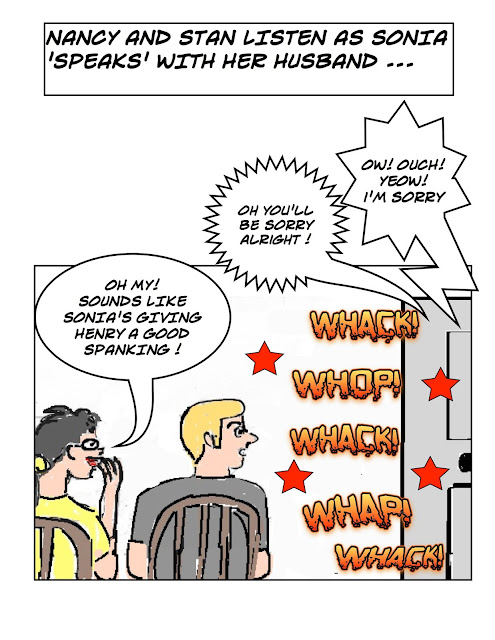 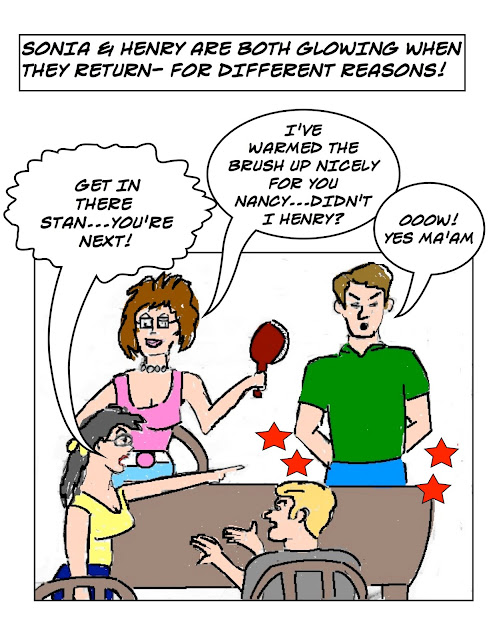 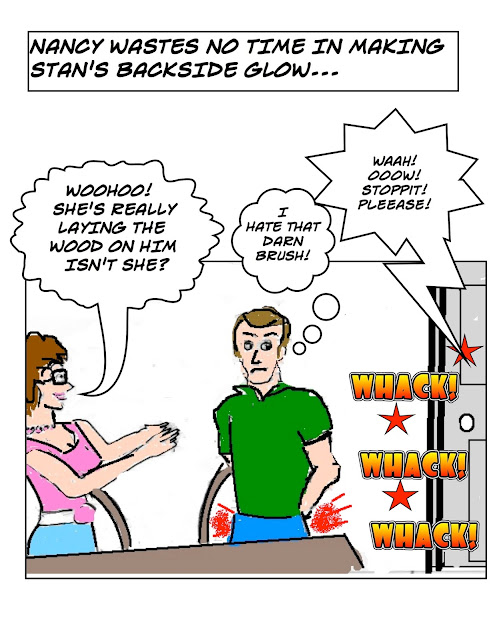 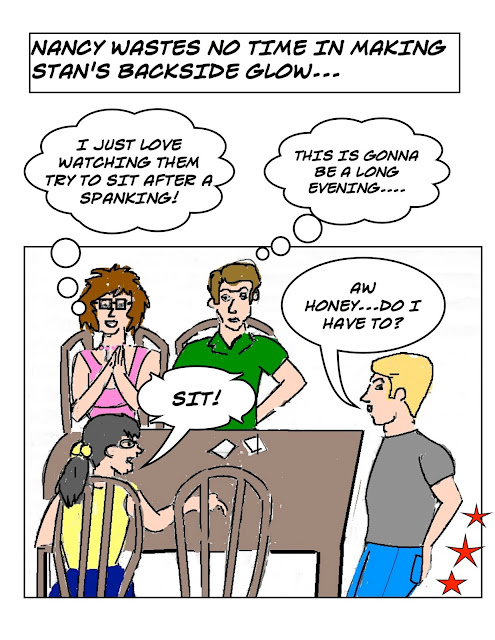 With summer long gone and the reality of winter slowly approaching , its a good time to reflect on those hot summer days up at the lake.
One of my favourite activities is to sit on the dock and watch people tip out of the canoe!
Sometimes it was purely accidental but , in the case of today's comic , premeditated ....and of course it leads to another of my favourite lakeside activities - a good spanking !

Well its that time of the year when the people who "ghost visit" blogs like this but never leave a comment good or bad.
I've had lots of visitors since I started this blog but very few who take the time to comment.

I'd love to have your feed back , positive or negative and input for future posts.

Don't be shy and let  me and other bloggers know you're out there by taking the time to comment ! 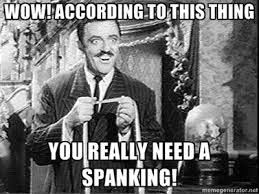 Posted by Glenmore at 8:38 AM No comments:

When this show was first aired I was sure it would break new ground and be filled with spankings but unfortunately I was long again.
Rex did ask Bree to spank him in one episode but she showed as little enthusiasm as the writers.
It would have been wonderful to see each and every one of them get their little tushies warmed but alas this will remain a fantasy.
Most of the housewives looked like they could give out a spanking so here are some scenes that never happened , except in my imagination.... 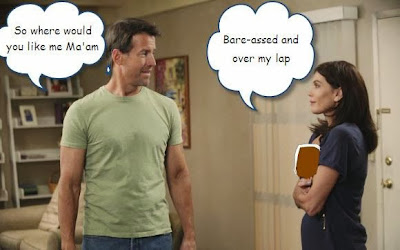 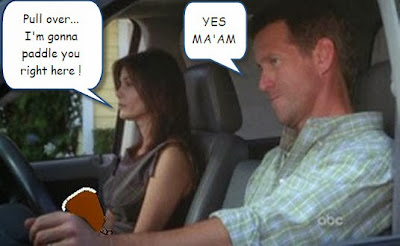 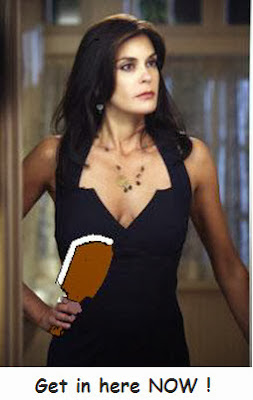 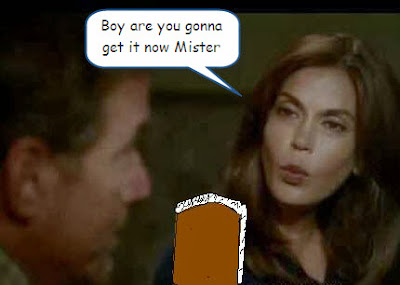 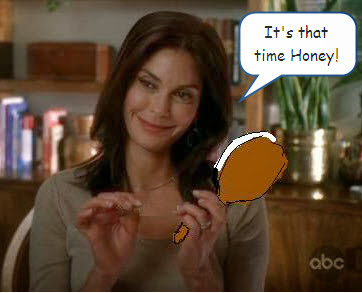 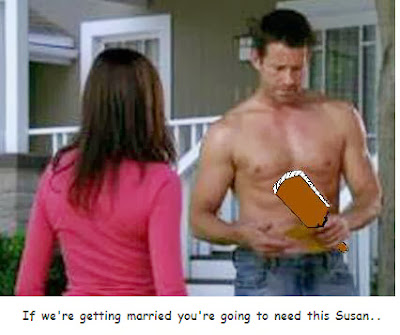 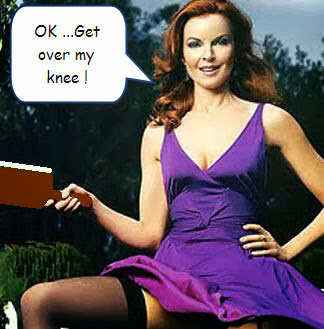 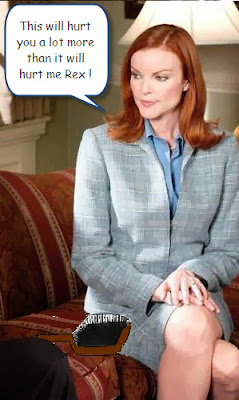 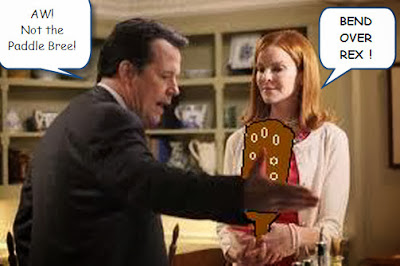 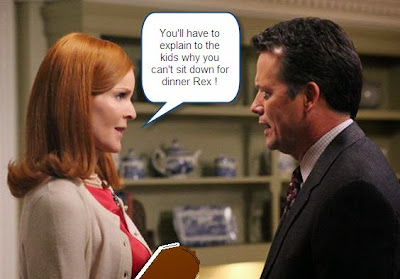 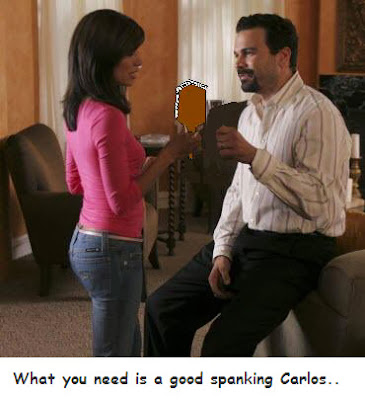 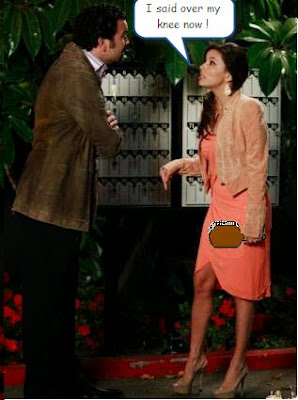 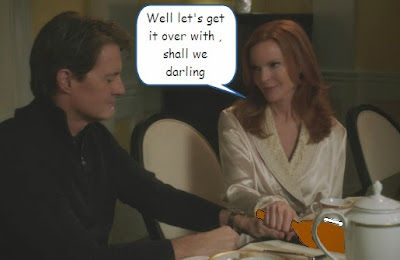 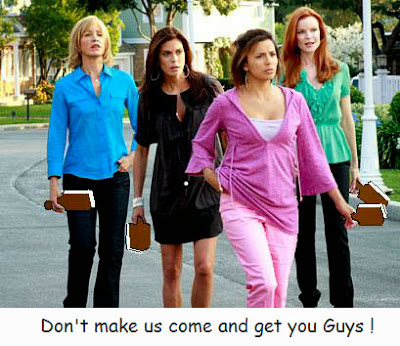 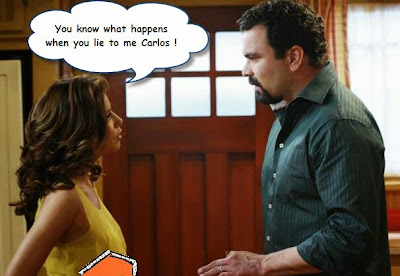