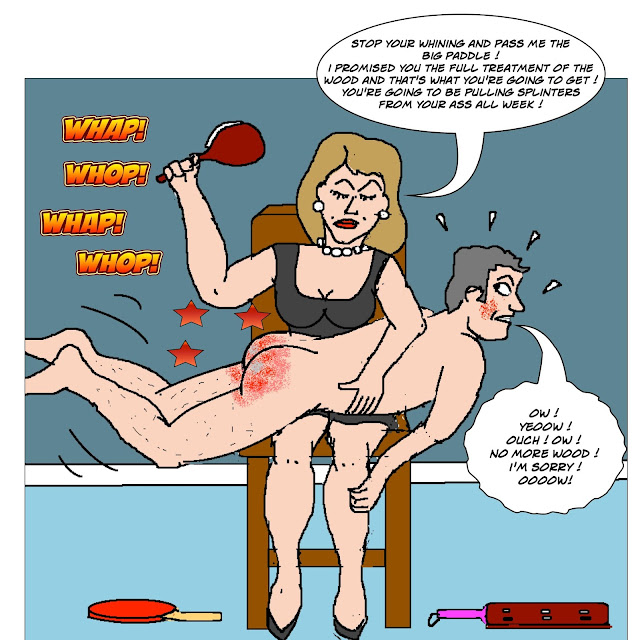 Charlotte loves gold and diamonds but , when it comes to disciplining her Husband , wood is her favourite ! 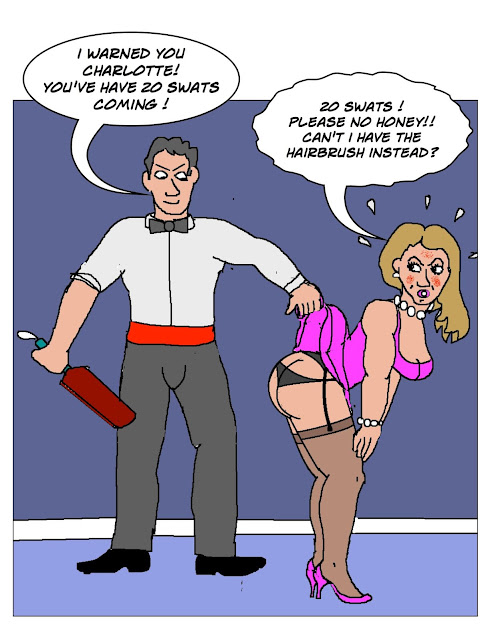 Sam had warned Charlotte what would happen if she acted up at his important dinner with clients but , once again , his flighty Fiancee did not listen.

Sam bought the big paddle just for this occasion , hoping it would serve as a deterrent  , but Charlotte doubted he would actual use it on her tender little bottom.

Well here she is , bent over , skirt raised and about to receive 20 licks with that paddle which will keep her from sitting comfortably for the rest of the weekend.

In desperation she tries to make a bargain with Sam to receive the hairbrush instead......but is that a wise move Charlotte ? 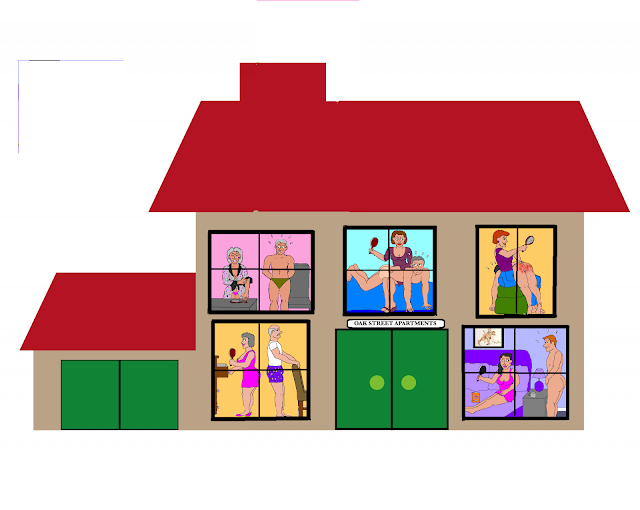 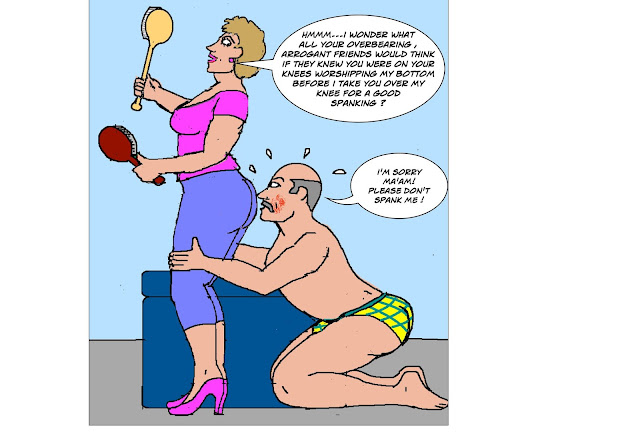 Stella has just endured another uncomfortable evening with Wilfred and his snobbish friends at the country club,  and is in no mood  for any more of his arrogant and overbearing behaviour.

She intends to humble him , and bring his ego down a notch or two,  in the time honoured way for wives with husbands like Wilfred....with a good , old-fashioned , bare bottom spanking !

She keeps two , very nasty brushes in her dresser drawer for exactly that purpose , and this evening they will be getting a lot of use !

But first her Husband must show his respect for her by dropping to his knees to pay homage to his wife by kissing her bottom and her feet.

If only Wilfred's snobbish friends could see him now......perhaps they will ? 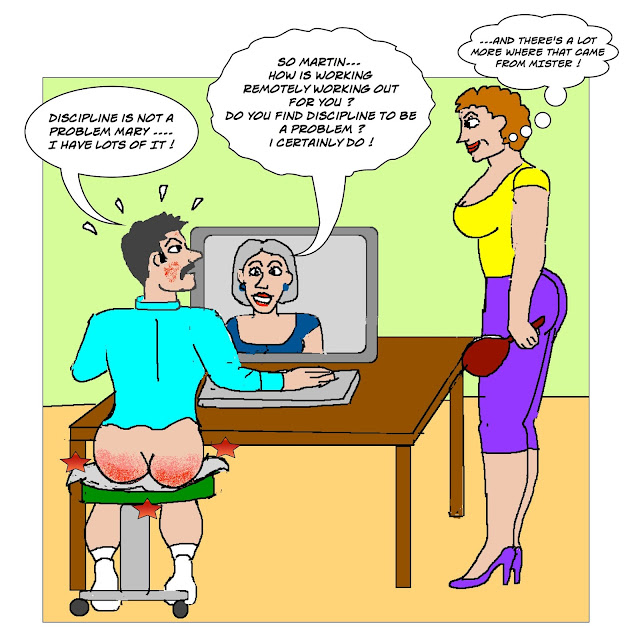 When Martin was told to work remotely he was delighted .
Sleeping in , not shaving , no commute , and working when he felt like it.
He especially enjoyed not having his Boss , Mary , hovering around and checking on him all day long.

On the other hand , Martin's wife Lisa was less than pleased to have her lazy Husband hanging around the house all day , so she proceeded to give Martin a schedule , and enforced it with the kind of discipline Martin knew only too well , a lengthy trip over her lap for a dose of her hairbrush on his bare backside.

Martin was soon yearning to get back to the office where he preferred Mary's supervision to Lisa's !
Especially embarrassing were the weekly Zoom calls , which Lisa made sure Martin was sitting on a well spanked bottom for ! 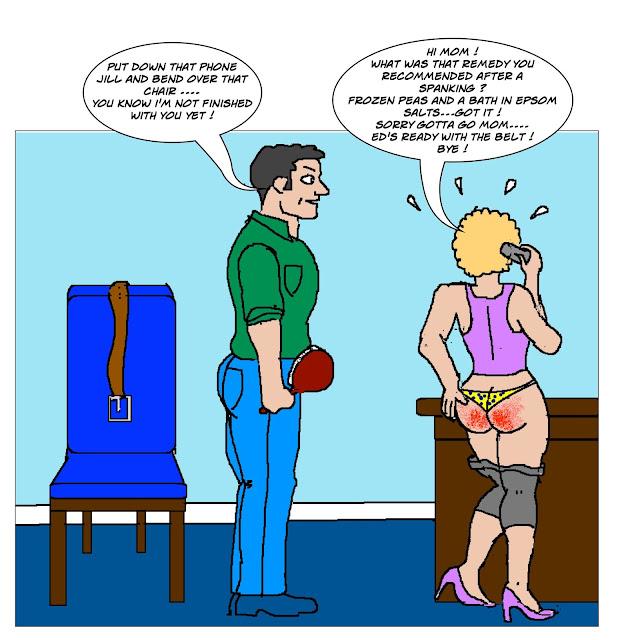 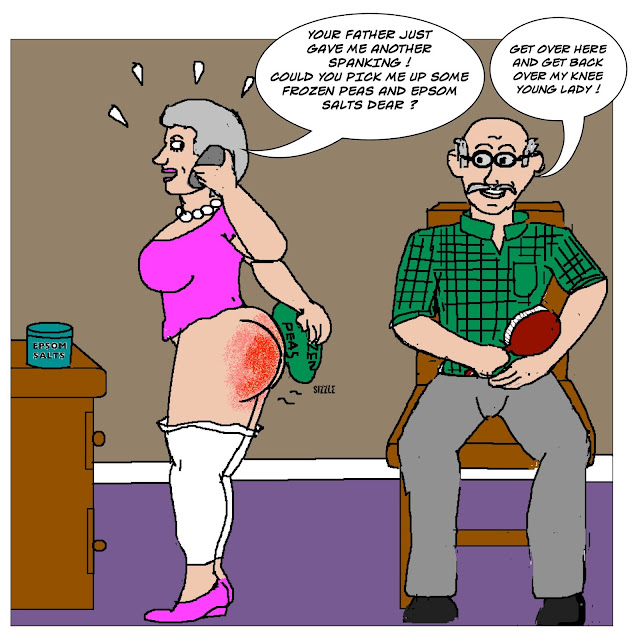 Apparently Jill had no time before her spanking to call her Mother for advice on how to sooth her sore bottom .
So her Husband Ed , permits her a few minutes to get the information she needs before moving to phase 2 of her spanking !
Mom knows best , she should , having spent more time over her Husband's lap than Jill has over Ed's lap !
It won't be long before Jill has that remedy memorized ... 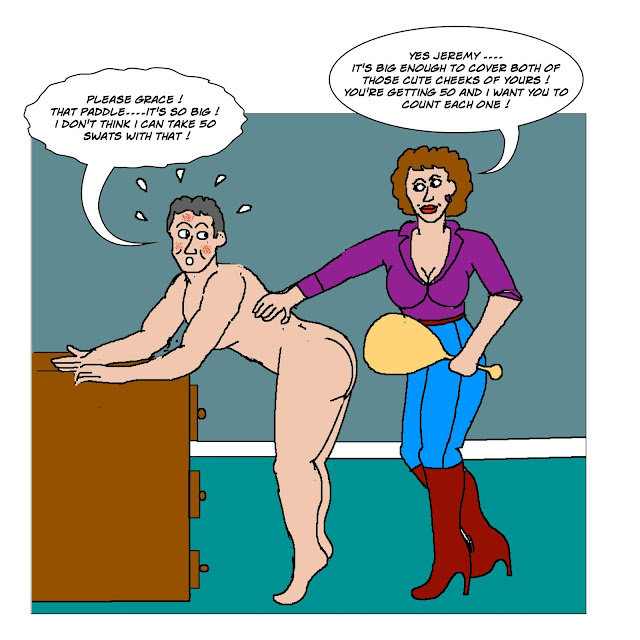 When Grace warned her new boyfriend Jeremy that she would paddle his bare bottom if he acted up , he didn't think she was serious.

So , after being late for 3 dates in a row , Grace decides that a good hard paddling is not only deserved , but will be the perfect cure for Jeremy's chronic tardiness.

To ensure his first paddling is a memorable one  , Grace intends to begin Jeremy's initial lesson with the fearsome Jokari paddle !

It is only after he has stripped naked and assumed the position , that Jeremy catches his first glance of the Jokari and it immediately strikes fear into his heart !

When Grace announces 50 strokes ,Jeremy is already regretting his tardiness !