Just you wait until I get you home ! - FM Spanking Cartoon 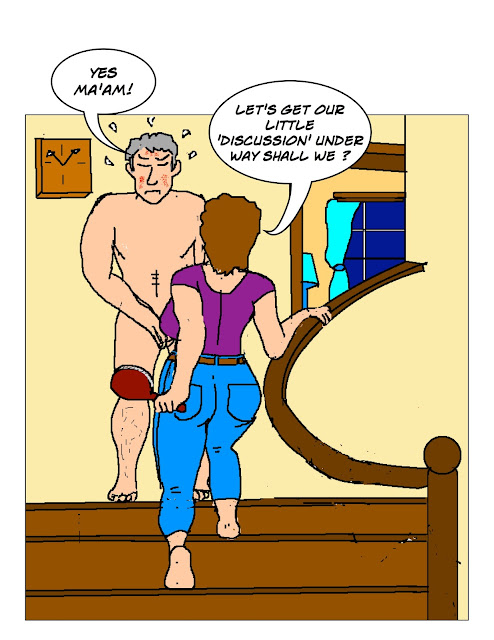 "Just you wait until I get you home !" Brenda fumed , causing a hush in the room.
Her boyfriend James just shrugged his shoulders , "It was just a joke Honey..." he argued as his friends looked on warily , under the icy glares of their own unapproving girlfriends and wives.
Brenda stood before James boldly with arms folded , "Well we'll be having another of our little 'discussions' about your 'joking' later!" she scolded.
Her threat made all the men in the room shift uncomfortably in their seats .
Sure enough , not long after he and Brenda arrived home , James found himself standing stark naked at the top of the stairs , nervously waiting for his still irate girlfriend.
Shifting from foot to foot , James did his best to cover his nakedness with both hands while Brenda finished her call.
"I just wanted to apologize for James' behaviour tonight Molly and to let you know that I will be dealing with him as soon as I hang up the phone!" he heard Brenda say to their host.
The rest of the brief conversation between the two ladies was inaudible to him , other than their laughs and giggles.
James could feel the butterflies in his tummy when he heard Brenda's soft footsteps on the stairs.
His mind raced , "What was she going to do?' he thought.
His girlfriend's intent soon became clear when he saw the stout hairbrush in her hand.
Brenda had threatened him with a spanking a few times since they started dating but he had always thought she was joking.
"Now Brenda....you're not serious about...." he babbled before Brenda cut him off.
"Oh I'm serious alright James....you're going to get that spanking I've warned you about....and , by the way , you will address me as Ma'am !" she scolded.
Brenda reached the top of the stares and regarded her naked boyfriend with a satisfied grin, "Let's get our little 'discussion' under way shall we?" she asked.
"Yes Ma'am!" came the curt reply from James , who turned and made his way into the bedroom.
Posted by Glenmore at 6:22 AM

Email ThisBlogThis!Share to TwitterShare to FacebookShare to Pinterest
Labels: Threat