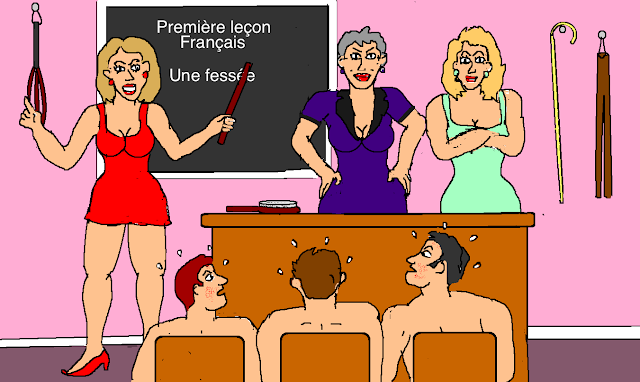 Larry cackled loudly along with his good friends Paul and Mark , who always enjoyed his bawdy sense of humour.

However , the same could not be said for the ladies around the table , and Larry's girlfriend Cecile glared icily at him , "Really Larry ! We  have talked about those rude jokes of yours so many times , and you know very well there is a time and a place for them ....and now is neither the time OR the place !" she scolded.

Larry's jovial face flushed red and his smile faded ,"Er...uhm....I know Cecile....I'm sorry ladies...I should have kept that one  for the locker room." he apologized awkwardly , looking at Cecile for absolution , but her expression confirmed  that none would be forthcoming.

"It's about  time I gave you another 'Français leçon ' Larry....and I can assure you this one will be a long and difficult one !" she warned , turning her boyfriend's face even redder.

"Why didn't tell us you were taking French Lessons Larry !" Paul asked , trying to avoid the stern gaze from his own Wife Beth.
Larry paused before opening his mouth to reply , "Well....I...actually...umm. " he babbled clumsily before Beth answered her husband's question for him.

"Actually Paul , Larry's 'Français leçons' are similar to the 'cours de danse' I give to you .....and you'll be getting quite an intense dancing lesson tonight  !" Beth chuckled to giggles from the other ladies , her comment instantly turning her man's face as red as Larry's.

".....and they're the same as the cooking lessons I give you Mark !" Susan chirped , "The lesson  you'll be getting tonight is about  wooden spoons and spatulas !"
Now there were three red-faced and speechless men sitting across from their ladies!

Enjoying theit mens' discomfort  , the ladies sat back in their chairs and sipped on their wine before continuing their conversation.
"A few French Lessons would be very beneficial for you as well  Paul ." Beth teased.
Cecile laughed , "I would be very happy to have Paul join Larry for tonight's lesson on French culture!" she offered.

Susan looked at Mark who was trying desperately to avoid her gaze , "What a great idea Cecile ! An introduction to French culture is just what Mark needs!" she declared.
The three terrified men babbled incoherently in unison , attempting to convince their ladies that lessons of any kind were not needed.

"Do you think you could give Larry some 'cours culinaires' Susan ? I really get fed up having to do all the cooking for him ." Cecile asked.
Susan cackled while Larry squirmed , " Of course Cecile , I'd be pleased to have Larry join Mark at our next culinary  lesson!"

"Make that three Susan....Paul needs to be pulling his weight in the kitchen too!" Beth declared, "....and in return Mark and Larry can join Paul at his next dancing lesson.

Cecile stood up and clapped her hands excitedly , "Voila ! Your education plan is all agreed Messieurs !" she announced to approvals from Susan and Beth.

The three men looked at each other , heads shaking in unison , "Now ladies....you can't be serious..." Larry blurted , electing himself to speak for his dumbfounded friends .

Ignoring Larry's protests , his girlfriend remained resolute , "In fact I believe we should commence your lessons without further delay. Larry please take Mark and Paul to my office and show them how to  prepare for the lesson." she ordered in a typical strict School Mistress tone.

Her boyfriend's brow furrowed , "Prepare ? You mean...." he stammered.
"You know very well what I mean Larry ! All your clothes off...not a stitch...off you go Gentlemen!" she replied.

Still stunned , Paul and Mark looked anxiously at their ladies for   a reprieve but none was forthcoming.
Beth nodded at her Husband , "You heard Cecile Paul.....off you go!"
"You too Mark !" Susan said firmly  , and after a short pause ,the men rose and  Larry escorted his bemused buddies down the hall.

"I would say that went precisely as we planned Cecile." Beth chuckled.
"I'll say it did! Those three are so juvenile ! Now let's make sure we give them the lesson they deserve !" Susan added excitedly.

A broad smile played on the French lady's pretty face , "Oh we will give them a lesson they will remember  Ladies." she said , spinning on her heel and striding purposefully down the hallway.

A smile played on Cecile's pretty face when she boldly entered the room to find Larry , Mark and Paul in various stages of undress.
"Every stitch Gentlemen.....then you may take your seats for the lesson! "she ordered , pointing at the chairs placed in front of her desk .

If the three men weren't embarrassed enough being nude in front of thevcomely Cecile , they were even more embarrassed when Beth and Susan entered the room!

Struggling to hide their nakedness they stood together against the wall.
Cecile curled a finger at Larry , "Viens ici et plie-toi sur le bureau !" she ordered.
Larry stood frozen for a moment , utilizing his limited French skills to comprehend Cecile's command.
The Martinet she held in one hand with the other pointing at the desk gave him a hint.

Reluctantly , Larry glanced at his two friends before making his way to the desk and slowly bending  over it.
Cecile smiled and hungrily eyed her man's pale , muscular bare buttocks.
Then turning her attention to Paul and Mark she pointed to the chairs , "S' asseoir!" she snapped angrily and the pair hurried to take their seats.
"Observer et apprendre messieurs." she said to them.

Cecile whipped the leather thongs of the martinet against Larry's bare skin .
'WHAACK!' "OOOOW!"
'TWHAACK!' "YEOOOW!"
WHAACK!' "AIOOOOW!"
Paul and Mark winced from their close quarters vantage point , as the martinet painted angry red lines on their vulnerable cheeks.
Even Beth and Susan flinched , impressed at the martinet's power.

Larry moaned , gasping and puffing loudly when 20th stroke finally landed.
He could not restrain a loud shriek "OOOW!" at It's sting.

Cecile smiled and turned to write something on the board behind her.
'Leçon 1  Une Fessée'
"Lesson 1 ...a spanking....that is what rude behaviour gets you Messieurs!" she announced.

Beth strode confidently over,  taking the martinet from a beaming Cecile , "Your turn Paul!" she announced , curling a finger at him.
"Asseyez-vous Larry!" Cecile barked and Larry painfully rose from his position  , glancing back to observe his sore and raw behind , " Oui Madame." he responded.

"GAAAAH! Larry moaned when he lowered his tenderized bottom onto the harsh chair , to giggles from the ladies.
"Se pencher!" Beth ordered , "Bend over!"
20 stinging strokes later , a contrite Paul was squirming beside Larry , and Beth passed the martinet to a visibly  excited Susan , who pointed a finger at her Fiancée , "Venir son jeune homme!"

Taking her cue from the other ladies , Susan delivered a full 20 strokes of the martinet , striping her man's behind.
The three ladies looked on in satisfaction at their contrite  men squirming and wincing before them , struggling to sit still on their well chastised backsides .

"Qui conclut la leçon 1Messieurs!" Cecile announced , pointing her ruler at the board.
"Une Fessée'" the men repeated in unison.
"Très bons garçons!" Cecile gushed , "Now you need to prove to us you are truly sorry..." she added.

The three men looked at each other quizzically when the ladies sat on the desk , crossed their legs and removed their heels.
Seductively , they eased up their dresses , undo  stocking from their suspenders and slowly easeing them  off.
Three male jaws dropped in unison as they looked on in awe.
Beth addressed them , shaking them out of their trance "On your knees Gentlemen and pay homage to your Queen !" she ordered curtly.

Without further hesitation , each man knelt before his woman , eagerly worshipping , sucking , kissing and caressing their bare feet and toes.
The women closed their eyes , cooed and sat back to enjoy the pampering , occasionally giggling at their man's well  striped and reddened backside .

The men seemed to be enjoying themselves too much , so Susan brought the foot worshipping session to an end with an abrupt "That will do Boys!"

Thee men remained kneeling , slightly confused , while their ladies slowly and teasingly reattached their stockings to their suspenders , straightened their dresses and slipped back
into their heels.

In rehearsed unison , they turned around , flipped up their skirts and leaned over the desk , jiggling their shapely derrierres and  thrusting them out.
"It's butt kissing time Gentlemen!" Beth announced , and the men enthusiastically complied , smothering the smooth female globes with kisses.

Three pairs of female hands reached back slowly ease their skimpy , panties down  to mid thigh.
Their men needed no further direction and dove into their next task enthusiatically!

Shortly after , three very satisfied ladies sat at the table , enjoying a coffee as their , still naked , men buried themselves in the kitchen doing the dishes and cleaning the kitchen.

"Our place next week for their dancing lesson !" Beth announced to excited giggles from her friends.