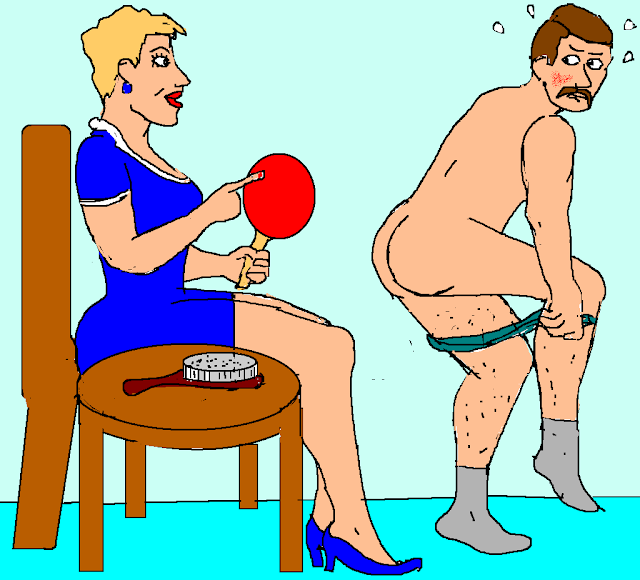 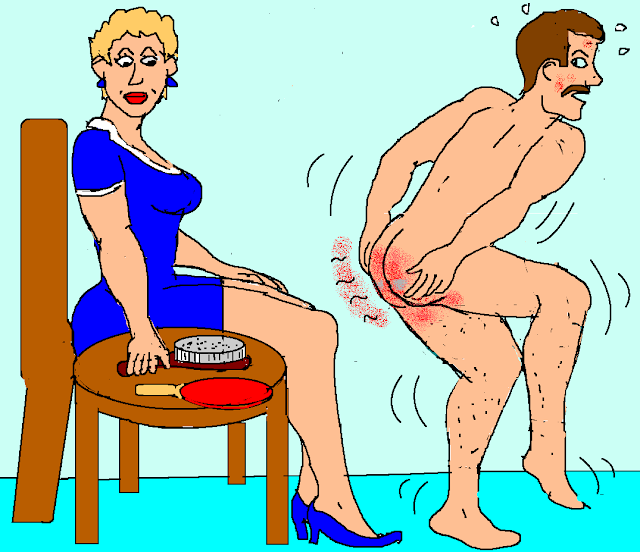 "Come in here please Jack!"
Jack recognized his wife Linda's stern tone and knew what it meant.He knew this was coming , but Linda enjoyed keeping him waiting , knowing she held the power to decide when and how his fate would be carried out.Linda sat comfortably on the bed , browsing her ipad when Jack quietly entered the room.He noticed the big chair had been moved from the corner to the middle of the room and upon it was placed his wife's paddle and hairbrush.Jack gulped when he saw them , knowing very well their intended purpose."OK get ready then." Linda said without even looking up from the screen.Slowly Jack began removing his clothes and stood before his wife stark naked.Linda let him wait there , continuing to work on her ipad without even acknowledging his presence.Finally she closed the iPad, placed it carefully on her night table and looked at Jack."You know why you're getting this spanking don't You Jack?" she asked firmly."Yes Ma'am!" he replied.Linda stood up , "Good ! Let's hope this will be a lesson well learned for you then , because I'm not going to let you off easy this time !""No Ma'am." Jack replied.Linda picked up the paddle , "Bend over the chair! I'm going to turn that naughty bottom of yours a nice bright shade of red !" she announced with a grin , "....and expect it to be red and sore for the rest of the day!"Jack simply nodded , turned and assumed the position without dispute.For the next 5 minutes , Linda  scolded and repeated Jack's various offences while  she cracked her paddle across her target.There were many offences this time , so after she finished delivering the first 100 or so good swats , her husband's rear was indeed the bright red hue she desired."So how does your bottom feel now Jack?" Linda asked with a satisfied grin."It feels like it's on fire Ma'am! ",came the reply.Linda was far from finished , "10 more 'scorchers' then ....and I want you to thank me for each one....understood?" she ordered."Yes Ma'am!"
Jack braced himself , tightening his grip on the chair.
He knew what Linda meant when she referred to 'scorchers'....she would assume a wide stance , stand back and then really swing the paddle with a full follow through that almost lifted both of them off their feet.
She also took the time to make her aim precise , landing in that tender spot at the bottom of his cheeks.
"Thank goodness it was only 10...." he thought.
"Legs apart slightly and hold on!" Linda warned , assuming her stance.
'WHACK!' "OUCH! THANK YOU MA'AM!"This was repeated until the 10th and final whack landed , and with each one Jack's voice withered and stuttered until at the last one he was barely able to muster a croaking "TH...TH..THA...ANK...YOU....MMM...MMA'AM!"
Linda stepped back to admire her handiwork .
Her paddle produced two visible grey spots on each of Jack's cheeks that were sure to blister and bruise , causing him quite a lot of discomfort for a while.
Licking a finger , she placed it her husband's glowing red bottom "SSSSS! SSSSizzle! That's hot!" she teased with a giggle.Putting the paddle down , Linda scooped up the hairbrush."Now that you're nicely warmed up , it's time for the grand finale!" she announced , taking her seat on the big chair and patting her lap."Over my lap you go mister!"she ordered briskly.PJ paused from trying to rub the sting from his rear and draped himself over Lady PJ's awaiting lap.She grinned and gave his red cheeks a playful slap.Yes , she was thoroughly enjoying This! Jack not so much....Then she went to work with her hairbrush , snapping the back against PJ's cheeks non-stop.Unlike the paddle, Linda spanked in a fast and furious manner, peppering Jack's behind , alternating from cheek to cheek , occasionally moving to his upper thighs or raining down spank after spank in a particular sensitive area if Jack yelped . She made sure to concentrate on those 'sit spots of his , the tender area between his cheeks and thighs .She was indeed encouraged by her husband's yelping and screeching , the many "ouches" and "ows" , and wildly kicking legs. He grabbed on tightly to her ankle with one hand and she could feel it tighten as she spanked away at a rapid-fire pace .
Jack was certainly feeling this , and would be every time he tried to sit for the next day or two!Out of breath , she finally released him and he sprang up , dancing from foot to foot and rubbing his cheeks furiously.Linda laughed, sat back and enjoyed the show. She loved it when Jack performed that silly , naked , spanking dance.
Jack always tried his best not to , but he never could!
"When you are quite finished with that sill dancing , I'm ready to hear your apology!" Linda said.Jack finally stopped and after catching his own breath offered a brief but sufficiently contrite apology to his wife who stood up and gave him a hug."That was for your own good! Now get dressed and I'll get supper ready." she said as if she had just completed a routine household chore.Jack could feel the scratchy warmth of his jeans against his stinging backside as he walked stiffly to the kitchen.Linda was already seated at the table and offered him a seat beside her , "You may want a pillow to sit on...." she said , almost sympathetically.Stubbornly Jack declined her offer , and immediately regretted it when he lowered himself onto his seat and sprang back up with another yelp."I warned You Jack!" Linda teased, "You should know by now what it feels like after one of my spankings!"Even with a soft pillow beneath him now , Jack squirmed and fidgeted through dinner and was happy to stand up and do the dishes."You probably don't want to sit and watch tv tonight Honey , so after you've done that I want the upstairs vacuumed and the bathrooms cleaned !" Linda chuckled , "....and you can put the chair back in the corner of the bedroom....until next time!"
Posted by Glenmore at 7:55 AM