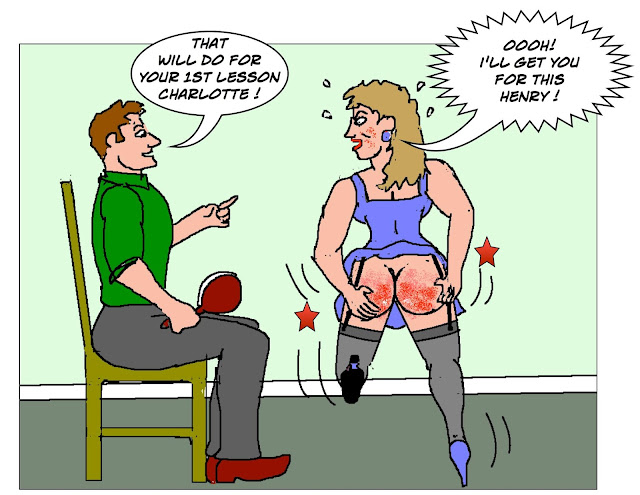 Charlotte snuggled closer to Henry on the couch , taking his wine glass from his hand and placing it on the coffee table beside hers.
Wrapping one arm around his shoulders and placing a silky thigh over his, she opened her full lips to meet his , only to be surprised when he suddenly pulled away.

"What's wrong Henry ...I thought..." a disappointed Charlotte stuttered,
Removing her hands and thigh from his , Henry shuffled away from her , "There is something we need to discuss first Charlotte!" he scolded.
His new Girlfriend's cute nose wrinkled in disappointment , "I don't understand...did I do something to upset you Henry ?" she asked innocently .

Henry bristled , his hands clenching into fists , "Have you forgotten the little incident at the restaurant with the waitress already ?" he asked her .
Charlotte blushed upon recalling the incident , " Oh that...well I said I was sorry didn't I ?" she whined.

Henry regarded her sternly , " ....and there was also that little tantrum at the party last week , not to mention your bullying of that poor young cashier at the supermarket!" he raged.
Charlotte had no intention of defending herself .
She had been hoping for a reaction like this from her new boyfriend for weeks and she hoped it may  have finally arrived.
"It's just the way I am I suppose....." she offered , hoping to ignite Henry even further.

Henry was an almost perfect boyfriend , good looking , considerate , generous and caring but he lacked one ingredient Charlotte needed in a man. She needed a man to take her in hand and out her in her place when she needed it....dammit she needed a good spanking but was doubting Henry would ever give her what she desired.

Her heart was beating fast and furiously as she waited for a reaction from him.
Would it be the reaction she was hoping for.
Abruptly , Henry stood up , marched purposefully to the front door and locked it .
"What are you closing the door for Henry?"Charlotte asked hopefully .

Henry turned to face her with hands on hips . She had never seen him look so forceful and commanding and she loved it.
"I'm locking the door for your benefit Charlotte. I'd hate to see anyone come in and see you lying over my lap getting a well deserved spanking !" he declared boldly.

A part of Charlotte thought he was joking but his  demeanour indicated he certainly was not!
She could feel her bottom tingling in anticipation. Had the momentous moment finally arrived?

"What are you taking about Henry ? A spanking ? Don't be silly ...." she babbled excitedly .
Henry took her wrist and hauled her unceremoniously to her feet.
"Henry ! How dare you threaten me like that!" she declared feigning indignation as she pretended to  tug  her arm free from his grip.

"Henry ! Where are you taking me ? " Charlotte asked as he marched her along.
"To the bedroom of course.....unless you prefer I spank you right here in the living room in front of that big picture window so everyone passing by can get a good look at your red bare bottom!" he replied.

"B...BB..Bare bottom? You wouldn't dare...." Charlotte gasped , barely believing her ears.
She was going to get her first real spanking in months ....and she could barely contain herself , but needed to play along.

Henry scolded her as he continued to drag his struggling girlfriend to their destination , "Yes I would dare young lady ! Don't you know that for a spanking to be effective it must be applied to the bare bottom!"
Charlotte's heart pounded with excitement and that tingling in her bottom intensified.

"But I've never been spanked before...ever !" Charlotte pretended.
Henry grinned , "That doesn't surprise me! Then the hairbrush will be a surprise to you also I expect!"he grinned.

"A hairbrush ? You're going to spank me with a hairbrush ? No Henry....please...it will hurt to much...just your hand ...and not too many spanks!" Charlotte pleaded.
Deep inside she longed for that hard brush to be stinging her cheeks . It had been so long!

Her boyfriend shook his head  , " I'm in charge of this spanking young lady , not you , so you'll be getting the brush and you'll be getting it hard !" he declared , helping her into the bedroom with a gentle shove.
Those were the words Charlotte wanted to hear , but Henry wasn't going to spank her before she put up a spirited fight.

Opening the top dresser drawer , Henry picked up the big antique hairbrush and slapped the back across his palm.
Charlotte visibly winced at the sound.
"I keep this especially to deal with naughty girls like you Charlotte !" he announced , advancing towards her.

"Don't  you dare Henry or I'll  never speak to you again!" Charlotte said , backing away before hopping over the bed to take refuge at the opposite side .
"Ah ! A chase! I love a good chase before a spanking!" Henry declared gleefully.
"So do I!" Charlotte said to herself.
So a tense game of cat and mouse ensued , Henry feigning and prowling while Charlotte tried to anticipate his next move.

Henry circled around the bed , lunging at Charlotte who scampered across it on hands and knees.
She almost made it , except for her dragging foot which allowed Henry to get a grip on her ankle.

Charlotte kicked her foot frantically while Henry pulled , reeling her in like a feisty trout on his line.
An unexpectedly sharp tug , had Charlotte flopping on the bed on her belly allowing Henry to secure a grip on her other foot.
As she desperately tried to scramble away , Charlotte found herself slowly being dragged in the opposite direction.

Charlotte put up a fuss and  squealed when she felt her dress being hoisted up over her hips,  and she flung a hand back to restore it , Henry had already fully exposed her shapely  bottom , framed by a black garter belt and stockings .
Henry paused to drink in the delectable sight.
It was almost as if his naughty girlfriend had dressed for a spanking!
Little did he know she had !

Scooping her up in his arms , he deposited her on her feet and settled into the chair he had already prepared.
Charlotte tried pouting and pleading , "Please don't spank me Henry. I'm sorry and I promise I'll be good!"
Henry looked up at her , "I'm afraid it's a little too late for that Sweetheart. You've earned this and now you're going to get It!" he declared , and with a yank of her arm sent her sprawling over his lap.

Henry hoisted her dress all the way up to her back to completely expose his target.
It was indeed a magnificent one , two round twin globes with milky white sheen  , jiggling ever so slightly as he arranged them on his lap.

Charlotte kicked her legs and pounded her little fists against Henry's muscular thighs,  knowing her attempts were mere dramatics.
She was going to get a good old fashioned , bare bottom spanking , and there was nothing she could do about it!

When her brisk warm up was over , Henry adjusted Charlotte's position on his lap and picked up the brush.
Charlotte's spanking was about to get serious and her entire body tensed with anticipation .
It had been a long time since anyone had used a hairbrush on her bottom and she wondered how it would feel.

The first swat of the brush brought an unexpected and frenzied reaction from Charlotte.
'CRRAAACK!'
"YEOOW! SHIT THAT HURTS HENRY!"she howled because it really did!

Henry paused momentarily to watch a red oval slowly form on his girlfriend's delicate cheek before delivering the same to her other cheek.
'THWAACK!
"OOOOH! GAWD THAT BURNS ! STOPPIT!" she howled .
But the burning also brought a sense of excitement and joy to Charlotte and she loved the way her boyfriend was taking charge.

Henry was enjoying himself just as much and set to work turning Charlotte's pale , jiggling cheeks a fiery red .
Charlotte screamed , squirming and kicking wildly on his lap as the punishing smacks kept raining down on her shapely tush.
Charlotte spread her legs a little , giving Henry an unexpected glimpse of the glistening charms within and she was raising her bottom to meet every spank.

Pleased with his girlfriend's reaction , Henry continued Charlotte's spanking to it's conclusion , finishing with a rapid-fire flurry of spanks which surprised her and had her bucking and  wailing like a banshee.

Afterwards , a relieved  Charlotte lay still on Henry's lap , gasping , moaning and breathing  heavily.
"OMIGOD! My butt is on fire Henry!" she declared as the burning in her rear intensified.
The whole experience was almost spiritual for her.
She had needed that spanking for so long and when it arrived it released so many emotions in her.

Henry released his grip ,  allowing Charlotte to spring to her feet , she clutched both cheeks and rubbed them furiously as she hopped around the room.
"That will do for your first lesson Charlotte!" a satisfied Henry grinned .
Charlotte turned to regard him determinedly , "I'll get you for this Henry!" she declared through gritted teeth.
Henry had no reason to doubt his girlfriend's resolve ....as he was soon to find out ....
There was only one thing Charlotte loved more than getting a good spanking.....and that was giving a spanking to a naughty man!
Posted by Glenmore at 7:40 AM