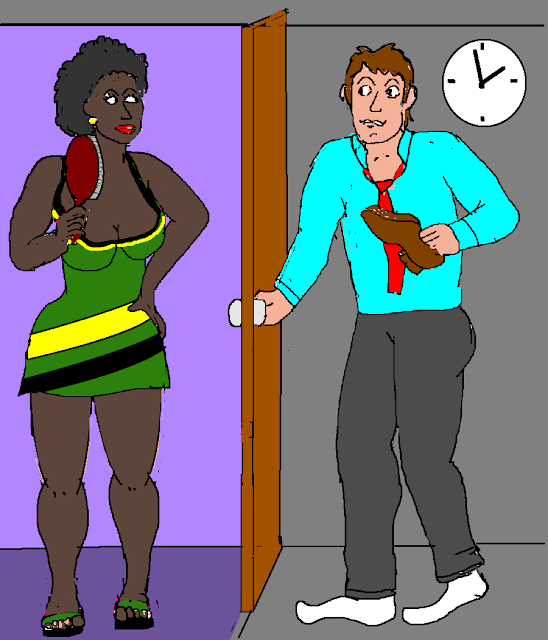 Steve carefully put the key in the front door , turned it ever so gently and eased it open , carefully closing it after him.
The front hall light was off , but , despite his tipsyness , he could see clearly enough to drape his coat on the hook , then he leaned forward to slip off his shoes before tackling the staircase.
He and his new wife Jenny had only moved into the house a few weeks ago , but Steve was aware of the creaks in each step.
Carefully placing his tip toes on each one he slowly navigated himself through the darkness up to the hallway.

He gasped with relief when he did not see a light coming from under the master bedroom door.
It was almost 2am and Jenny must be asleep , so thankfully his feeble  excuses could wait until morning .
His plan was to tell his new wife he had to pull an 'all nighter' at the office to meet a deadline  Jenny would understand....she always did.
There was no need for her to know that in reality , he had been drinking and partying with his single friends until the wee hours.

Placing a hand on the doorknob , he paused before slowly turning it to open the door just enough for him to slide inside .
So far , so good.
In the darkness he could just about make out Jenny'shis body curled up at the far side of the bed.
His mission was almost complete.
All that was left was to remove his shirt and pants and then slide into bed beside Jenny without waking her.

He struggled with the top buttons on his shirt and in frustration pulled it over his head and tossed it on the  floor.
Due to the combination of darkness and intoxication , the buckle in his pants belt proved more of a challenge than he expected ,but he finally was able to undo it and was  stepping out of his pants when the room suddenly lit up.

"Good evening Sweetie....or should I say Good Morning ?" a female voice called out from across the room.
Startled , Steve stumbled and tripped on his pants , his eyes squinting to focus on the figure of  Jenny standing with arms folded by the door .
"JENNY!" he blurted in surprise , forcing a goofy smile.
The stern expression on his wife's face made it clear she was in no mood for niceties!

Not knowing what else to do , Steve finished kicking off his pants and stood before Jenny in only his boxers.
"I was ah....er....working late again....I'm bushed....I was going to call but..." he began until his wife stopped him with a loud "ENOUGH!"
For a moment there was silence until Jenny added , "Don't even start with your lousy excuses Steve....I know where you've been. Phil's girlfriend called me hours ago!"

Steve had not bothered with a back up excuse, so just stood there speechless.
"You can take those off too!" Jenny ordered , pointing to his boxers.
As Jenny moved closer to him into the light , Steve noticed the big wooden clothes brush in her hand.
"W...ww..what's that for Honey?' He asked nervously , his eyes bulging and voice trembling.

Jenny tapped the back of the brush against her palm , "Oh this ?" she smiled looking at the implement with a smirk , "I'm going to blister your bare ass with it of course ....now get those shorts off and get over here !" she ordered , taking a seat in the big chai she had moved to the middle of the room.

Steve was dumbfounded , "WHAT?" he asked , his jaw dropping.
His wife patted her lap , "Come on then , let's have you! Over my knee you go. I'm going to give you a darn good spanking!" she declared with obvious glee now.
"A spanking ? With that thing? That's gonna hurt like hell!" Steve protested.

"Don't make me come and get you Steve! You know you deserve a spanking so get over here and take your punishment like a man!"his wife ordered.
Steve hesitated , but he realized Jenny was right , and slowly ambled over to stand by her side.
Leaning back , Jenny nudged her man over her shapely lap and adjusted his position to suit her.
Taking a moment to admire the sight of her husband's muscular , virgin buttocks she raised the brush above her head.
"Don't you dare ever lie to me again Steve!" she scolded , raising the brush high.

Jenny awoke the next morning feeling fresh and invigorated , while Steve lay groggily beside her on his tummy , his backside too sore to even place the sheets over it.
As he slept , Jenny admired her handiwork.
6 hours after his first spanking , Steve's entire rear quarters were a collage of colours and textures  , compared to their lily white smoothness beforehand .
He was going to be feeling this spanking for the next day or two !

The smell of breakfast cooking stirred Steve and he yelped when he rolled over onto his back.
"OMIGOSH!" he gasped examining his battered rear .
He also had a throbbing pain in his head so downed a couple of aspirins in the hope it might dull the pain in both.
He slipped  into his boxers and made his way to the kitchen where Jenny was happily humming as she cooked breakfast.
Even the short walk to the kitchen hurt as his shorts brushed against his tender skin with each step.

"Good morning!" Jenny gushed , planting a kiss on Steve's lips.
"You may want to fetch a pillow Honey." she advised as Steve made his way to the table.
"A pillow?" he asked through bleary eyes , "What for?"
"To sit on....your poor bottom must be very sore..." she said with a satisfied grin.
"Oh I'll be fine!" Steve replied bravely,  trying to maintain some of his proud  male dignity.
Unfortunately his dignity disappeared when he leapt to his feet once his rear rested on the hard wooden seat.
"OUCH!" he yelped clutching his swollen cheeks.
Jenny laughed , proud of the fact that she had rendered her husband unable to sit.
With a giggle , she tossed him a cushion which he caught gratefully .
"Serves you right for being stubborn!" she scolded with a playful grin.

After carefully lowering himself onto the softness of the pillow , Jenny poured him a coffee and placed a document in front of him.
"What's this ?" he asked .
"A DD Agreement!" Jenny chirped as she continued to serve breakfast.
"DD ? What's that?' her still groggy hubby replied.

"DOMESTIC DISCIPLINE ! DD!" Jenny emphasized .
Steve's brow furrowed in confusion while Jenny pushed a plate of bacon and eggs in front of him and sat beside him.
"I'll explain while we have breakfast Sweetie." she told him.....