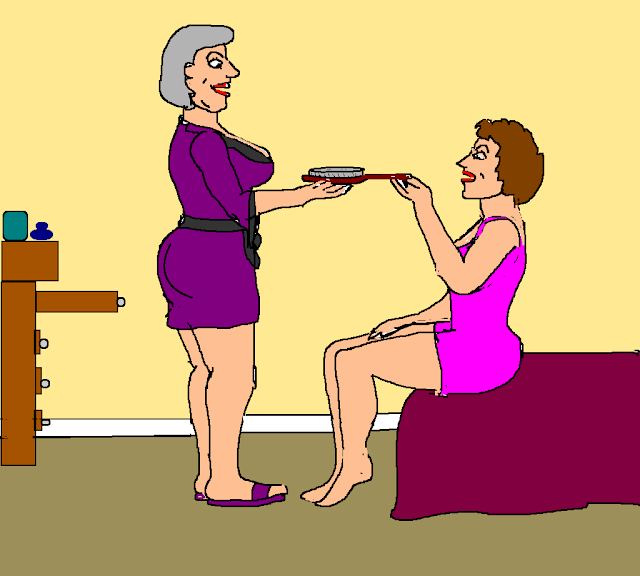 Stella was abruptly awoken by the commotion downstairs.
Rubbing the sleep from her eyes , she could see the time was 2am.
Her Husband William lay beside her snoring , his deep sleep undisturbed despite the escalating noise.
Sitting up in bed , Stella could hear her daughter Susan and her new husband Alan arguing loudly.
Susan and Alan had been married only two weeks and moved in with Susan's parents to save money for a down payment on a house of their own.

Despite the close quarters , the living arrangement seemed to work out fine , with the younger couple taking the downstairs bedroom while Stella and William slept upstairs.

Occasionally Stella could hear the sound of the newlyweds frolicking or noisily making love downstairs and thought it was cute,  but this was different. This was a full blown argument , likely their first.

The front door slammed loudly and the sound of Susan crying  prompted Stella to leap out of bed and wrap her robe around her rubinesque  frame.
It took a pair of shakes to her slumbering husband to wake him up .
"What...what's going on?" he mumbled , his eyes reacting when Stella flicked on the light.

"Susan and Alan are arguing ....big time...and now Susan is crying. I think Alan just left in a huff!" Stella told him.
Unconcerned , William rolled over and adjusted his pillow.
"You're overreacting Stella....they're newlyweds....don't you remember how we used to argue when we were their age!" he told her , "Go back to sleep....they'll be fine!"

William's attempt to resume his sleep was interupted by a loud knocking on their bedroom door , "Mom! Steve has left me!" Susan wailed.
"There! I told you!" Stella told him , hands on  hips , "Now get up out of bed this minute or I'll  you'll have another date with my hairbrush later !"
Heeding his wife's warning , William sighed ,  slowly rolled out of bed and reached for his robe while Stella opened the door to console a weeping Susan.

" Come and sit down on the bed and tell me what happened Dear." she said , placing a comforting arm around Susan.
"Alan came home late again and when I told him he was spending too much money on things like golfing  gambling and drinking with his friends , he just flew into a rage and accused me of nagging him too much. I was just trying to get him to control his spending like he agreed so we can save our money for that down payment. Anyway he wouldn't listen and stormed out and told me not to wait up for him!" Susan wailed.

Stella looked at William for assistance .
"I think I know where he  might be .I'll go find him and have a talk with him...." William sighed  , and while Stella calmed their daughter down , he headed off into the cold evening  in search of his sulking son-in-law.
He knew Alan well , and saw a lot of his younger self in him.
Fun loving but stubborn , angry , impetuous and selfish!
Like him , he knew if Alan didn't change his ways soon , his marriage would be in trouble.
He could talk to Alan , but he knew that Stella  would be having a talk with Susan about how to deal with her new Husband's errant ways!

"What am I going to do Mom? He just won't listen to me !" Susan sobbed.
Stella took a firm grip on her daughter's shoulders and gave her a shake , "Well you can start by stopping that silly crying and feeling sorry for yourself. You need to be strong ....no wonder Alan is walking all over you !
He is no different from your Father when we were first married!"

Her Mother's stern tone brought Susan to her senses.
She was right...Alan was treating her like a door mat and it needed to stop...but how ?
"Really ? Dad was like that? But now he is so loving and respectful..... " Susan began.
"Respectful and well behaved !" her Mother confirmed proudly , leaning closer to her daughter.
"Believe me Susan , all men are really little boys at heart , so as a wife you need to be firm and deal with him the same way their Mother did."She explained.

Susan looked confused , "Like his Mother did ? What do you mean Mom?"
Stella smiled  , "Let me show you something Dear ...." she replied , turning to her dressing table and scooping up the large hairbrush from the top drawer.
"Here.....you can borrow this....but I'll need it back. " she said , handing the brush to her daughter.

" A hairbrush? " a puzzled Susan asked , "...but I already have one Mom."
"Not one like this  Susan! I never use this one for brushing my hair, its 'business' side is the back of the brush and , believe me , it gets used quite a lot....the very sight of this brush keeps your Father on his toes!" she chuckled , rolling the brush over in her hand as she reminisced  , "Yes my brush and I have had lots of very productive 'discussions with your Father over the years !"she chuckled.

"Discussions?" Susan asked , still struggling to understand.
Stella laughed , "Well I suppose they aren't 'discussions' in the literal sense, as I do most of the talking. In fact , the only contributions from your Father are 'Yes Ma'ams' and 'No Ma'ams '.....along with lots of 'Ouches ' and 'Ows' of course!"

Susan's eyes widened  as she finally saw the light , "You mean you really  spanked Dad with this?" She giggled.
"I certainly do! Just like his Mother did ....bare bottom and over my knee!" Stella replied proudly.
The two women enjoyed a laugh for a moment until Stella looked seriously at her daughter , "If I know your Father , he's likely found Alan by now and will advise him to come home and take his medicine like a man , just like he did. So when he gets here , it's up to you and Betty here to have that long , overdue 'discussion' with him about his behaviour!"
"Betty?" Susan tittered,  "Is that what you call this?"
Her Mother smiled , "Actually her full name is Betty Blister!"
" I can see why you call her that....it must really hurt on a bare bottom!" Susan agreed tapping the back of the brush against her palm with a look of determination on her pretty face , "Don't worry Mom, I intend to give it to him good!" she replied , continuing to slap the brush against her palm as if she was imagining it was her new husband's backside.

Meanwhile a few blocks away  , William and Alan were finishing up their chat over coffees.
"I suppose you're right Mr. Coulter....it's all my fault and I've behaved really badly and owe Susan an apology."Alan finally admitted.
William smiled , Thattaboy! Now let's get you home so you can face the music!" he announced, slurping up the last of his coffee.
The younger man suddenly  looked concerned , "Wait a minute.....Face the music? What do you mean? I thought you said Susan would understand?" he asked.
" Don't worry  son, she'll understand , but not before she's finished having a long 'discussion' with you!"
"A discussion? What sort of discussion?" Alan asked worriedly.
The older man chuckled , "Actually ,it's not going to be a discussion per se....because Susan will be doing all the talking , and my advice to you is to listen to her! In fact , if the discussion goes as I think it will you'll have no choice but to listen to her! "
"I suppose you're right...I deserve whatever Susan has planned for me...."  Alan agreed ,still not fully recognizing what was really in store for him.

Alan said little on the short walk home as he reflected on his poor behaviour ,  experiencing feelings of contrition and trepidation .
When they arrived home the pair were greeted by a smirking Stella who wasted no time in telling Alan , "Susan is waiting for you in the bedroom to have a 'discussion' with you Alan."
Alan looked at William,  receiving a reassuring Fatherly wink before opening the door to the bedroom to face his awaiting wife.

Stella and William  waited until the door closed quietly before making their way upstairs to resume their interupted slumber.
William immediately noticed the open dresser drawer , "Where's Betty...." he asked curiously peering inside.
Stella smiled , removed her robe and slid into the bed , "I lent her to Susan of course silly....she's going to need it for her discussion with Alan ..... but don't worry Darling ,  I'll have it back in time for our own little discussion tomorrow !"
William sighed , his shoulders slumping , "Aw no Stella....do we have to?" he whined sliding into bed beside his wife.
Stella snuggled close to him and kissed his forehead , "You know you have it coming Dear , Susan and Alan are going out to dinner tomorrow night so we will have the place to ourselves!" she assured him.

By the time William turned out the light ,audible sounds were coming from downstairs.
This time instead of yelling and arguing , Stella was proud to hear her daughter scold and lecture her errant husband in a stern and confident tone.
In contrast , Alan's voice was low when he offered his muted apologies.
There was a short pause before the rhythmic sound of wood being applied to bare skin echoed throughout the old house , eventually accompanied by lots of 'Ouches ' 'Ows ' 'Yes Ma'ams ' and 'No Ma'ams ' from Alan.

"She's really giving it to him good !" William laughed.
Stella smiled in satisfaction , "That's my girl ! I'd say Alan will be sleeping on his tummy tonight.....just like you will tomorrow night!"she informed her
husband.

Only a few months later , Alan carried Susan over the threshold of their brand new home with  Susan's parents as  their first visitors.
"A housewarming gift!" Stella smiled handing Susan a small neatly wrapped package which she excitedly opened.
"You mean a 'bottom warming' gift Mom!" Susan giggled , slapping the back of the big ebony brush against her palm as her slightly embarrassed husband looked on , " I'm sure Alan will give me a reason to try it out soon!"
"Well you almost wore out my brush on Alan so I bought one for myself too...." Stella remarked ,
"....and I can assure you it is very effective,  isn't it Dear?" she asked a red-faced ....and red-bottomed William.
"Yes Ma'am." a subdued William replied , his response producing a rapturous laugh from his wife.
"You don't have to refer to me as Ma'am while we're here Dear , you can resume that when we get home!"
Susan laughed and gave Alan a playful poke and handed him the new brush , "That goes for you too Sweetie , now go put this away in my dresser drawer!"