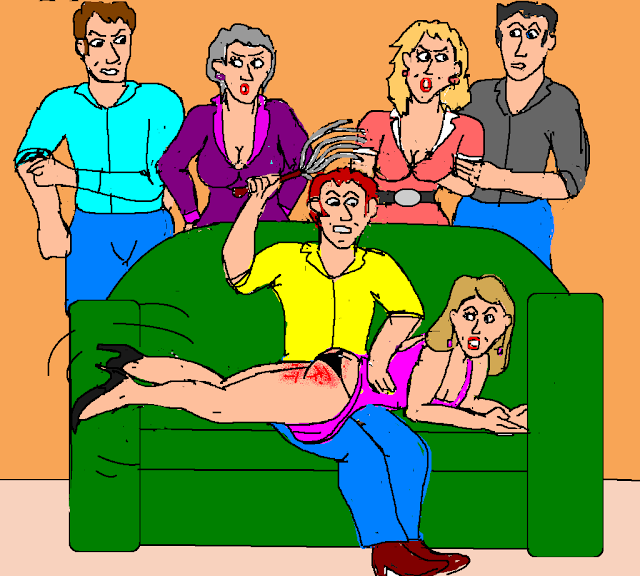 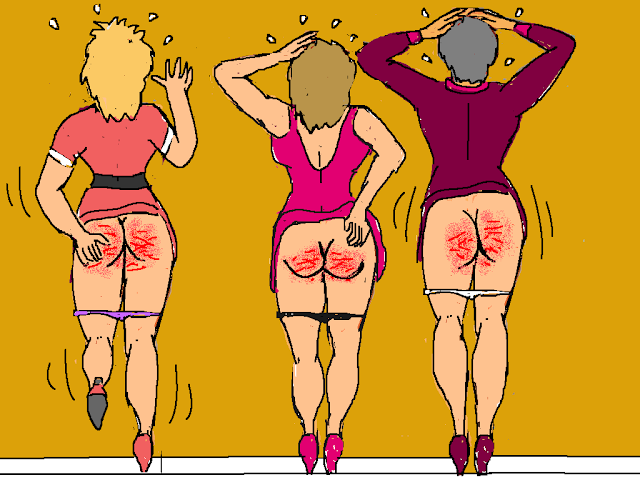 Beth , Cecile and Susan sat on the sofa together , collectively staring down at their shoes as their men towered menacingly over them.
"What the hell were you gals thinking?" a frustrated Paul asked.
After a pause , Beth meekly looked up at him , "It was just a bit of fun....we didn't mean to cause any damage?" she shrugged.
"Well you caused a LOT of damage...." a furious Larry raged, "....and you were very lucky you didn't damage yourselves!" he added.

His girlfriend Cecile twiddled her thumbs nervously , "Je suis desole...." she replied.
Susan , the youngest of the trio decided to offer a defence for their actions , "It was my idea to go off roading with the trucks.....but don't worry , we'll clean them up and pay for the damage!" she offered.
"Oh you're going to pay alright....as soon as I get you home!" her Fiancee Mark scolded.

"Don't be silly Susan , we are all responsible .....we all agreed to it and we'll pay the price together!" Beth added and Cecile nodded agreement.
"So what should we do with them?" Paul asked as the men huddled to decide their fate.
"Well I know what they would do to us if we did something like that!"Larry said , rubbing the seat of his jeans for emphasis.

Mark grimaced and gave his own rump an instinctive rub as he recalled his Fiancee's strict discipline "What's good for the goose must be good for the gander!" he said, ".....or is it the other way around? Anyway you know what I mean."

Paul agreed and turned to the trio of contrite and unusually silent ladies.
"So ladies...you want to be punished together so what should we do with you?" he asked.
The three women looked at each other and nodded in unison before Cecile stood up , "I'll go fetch the Martinet....it's what naughty girls deserve !" she announced .

Moments later she returned with the fearsome implement she had used frequently on Larry's backside and handed it to him , "I'll go first!" she said bravely.
Larry took the Martinet from his girlfriend and firmly gripped her arm , "Excuse me ladies." he said prompting Beth and Susan to vacate the sofa.

Larry sat down on the sofa and Cecile carefully draped herself across his lap.
Glancing over her shoulder ,   she reached her arm back to flip her skirt up and reveal a very shapely derrierre framed in a pair of black lace panties.
Pausing to take in the glorious sight , Larry whisked the tiny undies down to expose Cecile's lovely cheeks in all their glory while Paul and Mark looked on approvingly !

Soon they were wincing along with everyone else as Larry lashed the leather thongs against his girlfriend's tender flesh until it was red and well striped.
Throughout , Cecile gripped Larry's leg firmly , letting out little gasps and yelps as the thongs stung her bottom.
Finishing abruptly , Larry scooped up his petite lady and deposited her in the corner with her bright red bottom on display .
"You're up !" he said , handing the martinet to Mark.

Susan looked horrified , having witnessed her friend's thorough thrashing , "Please Mark....not too hard with that thing ...." she pleaded before letting out a shriek when she was unceremoniously dumped face down over her Fiancee's lap for the first time!
She had plenty of experience with Mark's bare behind over her lap but now the tables were well and truly turned.

"Oooooh nooo!" she squealed when Mark hoisted her dress and yanked down her tiny thong to provide the audience with yet another fetching sight.
Susan kicked her feet , squirmed and yelped to no avail as Mark wasted no time in transforming her virgin pale cheeks to the same fiery red as Cecile's.
Afterwards , she hopped on her heels , rubbing her bottom and was still rubbing furiously when Mark parked her in the corner beside a grimacing and squirming Cecile.

Paul took his place on the sofa ,  slapping the leather against his palm and regarding a stunned Beth.
"Hoist up that skirt and over you go Beth....you deserve this !" he told his red faced wife.
She stood by the sofa and slowly raised her dress all the way to her waist to reveal her voluptuous curves and crawled over Paul's lap.
A pair of tiny white satin panties left little to the imagination but Paul skinned them down also.

The martinet soon had a stoic Beth screeching and kicking as the burning sting in her nether regions intensified.
She had great difficulty remaining in  dignified position and found herself climbing all over her husband's lap to avoid the lash of the leather on her tender skin , providing quite a view to the entranced male audience .
She was just as sorry and contrite as her two partners in crime when Paul led her into the corner with them.

The three men stood back and smiled to take in the wonderful sight of the trio of well spanked female bottoms.
"You three can stay in the corner and think about your behaviour until we come back !" Paul scolded.
"....and don't even think of moving or rubbing those bottoms!" Mark added.
"Yes Sir!" the three ladies chimed in unison , with just a hint of sarcasm that went unnoticed by their men.

Once she heard the door close , Beth peered over he shoulder to inspect he freshly spanked bottom , "Well that was nowhere near as bad as I thought it would be ..." she observed.
Cecile glanced over and then tilted her head for an examination of her own  shapely behind , "Oui Beth....it looks worse than it feels....they let us off quite easy actually. They certainly don't know how to use the martinet the way we do!" she said.
Susan was carefully inspecting her bottom , "It definitely stings but I'm sure glad they didn't use a hairbrush!" she agreed.
"That is why I offered them the martinet Susan , they really were not sure how to use it were they?' Cecile giggled.
"That training Cecile gave us really made a difference ....Paul hates the martinet almost as much as my hairbrush now !" Beth chuckled.

The three moved quickly into position , appearing as contrite as possible , when they heard the  door re-open.
"Well those three won't be able to sit for dinner unless we do something guys!" Larry announced.
Paul and Mark nodded their agreement.
"It would certainly help if you gentlemen could apply some cold cream to our poor sore bottoms?" Susan purred.
"Would you like me to fetch the cream from the bedroom Sir?" Cecile asked in a schoolgirl tone.

Minutes later the three naughty ladies were bent over the couch ,  cooing seductively as their men enthusiastically applied large gobs of cold cream to their shapely , jiggling bottoms.
Once they stood up and turned around , their men could not hide the obvious bulges in their pants.
"Well , well .....it hardly makes sense to pull up my panties now does it Cherie?" Cecile pouted , sliding her hand down Larry's jeans.

She let out a squeal when he scooped her up and carried her upstairs with an abrupt "Excuse us for a while guys!"
Susan had already dropped to her knees and was excitedly undoing Mark's jeans to unleash his growing member, while Paul  eagerly lead Beth to the privacy of the kitchen.

Later , Paul lay back in the bed admiring his wife's still blushing bottom as she prepared for bed , "Well that certainly was an interesting evening Sweetheart....how is your bottom?" he observed with satisfaction.

Beth placed a palm on her bare bottom and rubbed it seductively, "Actually it feels kind of nice Honey....did you enjoy spanking me?" she asked.
"I certainly did !" Paul replied , leaning back and placing his hands behind his head.
His wife slowly turned to face him , slapping the back of her hairbrush against her palm , "Well I wouldn't be so smug about it if I were you Darling!" she said firmly , her jaw tightening.
Paul's eyes widened , "Now Beth.....I didn't mean..." he stuttered when Beth placed a pillow on the spanking chair and carefully lowered her bottom onto it , "Over you go Paul....we have a lot to discuss!" she declared.