Something in Common - MF Spanking story 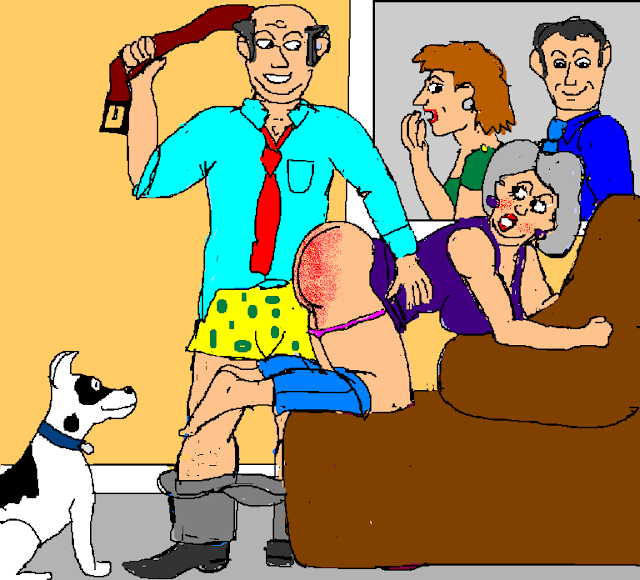 "Didn't I tell you to be home early tonight Rodney? We're entertaining the Boswells !
You still have to vacuum , set the table and I hope you picked up the champagne and wine ?" Marsha yelled at her long-suffering husband.

Rodney worked hard at his job at the bank , and by Friday night he just wanted to kick back and relax with a cold beer , not to perform chores and spend an evening with those boring snobs his wife was so anxious to impress.
He let out a sigh  , put down his briefcase and hung up his coat while an angry Marsha continued to nag and lecture him.

"The Boswells are very important people and you know how much this dinner means to me Rodney but you just don't care do you ?"
An exasperated Rodney turned and stared down at his diminutive but feisty wife , " No I don't care Marsha !" he blurted , his response stunning Marsha for a second , "WHAT DID YOU SAY? " she asked indignantly.

Rodney leaned closer to his wife , forcing her to lean backward slightly , "I said I don't care to have dinner with your snobby friends Marsha, and I certainly don't intend to start doing chores after a long hard week at the office , while you've been sitting at home all day doing nothing!" he blasted.

"How dare you speak to me in that tone Rodney!"  Marsha gasped , but her jaw dropped when Rodney deposited his jacket on the floor , loosened his tie and rolled up his sleeves.

"Wha...What are you doing Rodney?" Marsha asked anxiously.
Rodney unbuckled his belt , "Something I should have done years ago woman ! I dearly love you Marsha , but your nagging and putting on airs need to stop. Let's see if a well-earned bottom warming will make an impression on you !" he announced.

"Now Rodney....let's be rationale here...you're not really going to spank me are you?" she asked meekly,  backing away from him.
Rodney whisked his belt off and looked down when his pants fell to the floor.
Marsha giggled loudly at the sight of her husband standing in his bright yellow underwear!
For a second Rodney thought about reaching down to restore his pants , but instead reached for his wife's wrist ,  pulling her to him.

Marsha was not giggling anymore when she realized her Husband's intentions.
She put up  quite a struggle , but a determined Rodney was eventually able to peel  down Marsha's skin tight Jean's over her ample curves.
"Rodney! Nooooo! What are you doing ?" Marsha shrieked .
"You're getting a proper spanking Marsha ....on your bare bottom!" he replied .

Having deposited his wife's jean's to her knees , Rodney could not resist pausing momentarily to admire Marsha's large and curvaceous derriere framed in a barely there pair of pink panties.
Marsha spent a lot of his money on lingerie , but this time Rodney didn't mind !
Rodney whisked down the tiny but expensive undies producing  another girly shriek from Marsha.
"NOOO ! Not on the bare Rodney....pleeeease!"

Rodney pushed his bare bottomed wife into position over the big armchair in front of the living room window.
"Rodney! Not here! The Boswells will be here any minute....they might see!" Marsha squealed.
Her husband ignored her ,"Then we'll have something interesting to talk about over dinner for a change!" he replied with a satisfied grin.

Rodney secured his struggling ,wiggling wife over the chair so her beautifully round ,  bare and jiggling cheeks just where he wanted them to apply his belt.
It was indeed a delectable target!

While Marsha howled , kicked and bucked on the chair , Rodney released 20 years of frustration on his wife's deserving bottom.
Rodney was so focused on his task that he did not notice the Boswell's looking aghast through the window

Despite the stinging in her rear quarters , Marsha also noticed the Boswells witnessing her embarrassing chastisement with some amusement.
She made eye contact with Samantha Boswell who winked at her through a broad smile.

"Rodney! The Boswells are at the window...please stop! It's SOOO embarrassing !" Marsha pleaded.
Her husband paused to look at the Boswells and waved at them , "I'll be with you in a moment!" he chortled.
Then with a rapid-fire flurry of whacks he concluded his wife's well earned whacking.
Marsha whined and kicked her legs wildly before leaping to her feet clutching both her reddened globes.

Rodney turned to open the door , but found  himself lying flat on the floor when he tripped over his fallen pants.
Meanwhile , his red-faced wife , her skinny jeans still at her knees rubbed her red bare bottom and  made her escape upstairs.

The waiting Boswell's took in the comical scene with uncontrolled laughter.
His pants fully belted now , Rodney  greeted the amused guests ,
deciding the best approach was to pretend they had not seen the spanking,  and their guests respectfully played along.

"Marsha has just popped upstairs to change , she'll join us in a moment. Sorry for my appearance but I had to work late." Rodney explained while pouring the drinks.
Samantha Boswell grinned at her husband , "There's no way Marsha is fitting back into those jeans after that spanking !" she whispered to her husband , "I certainly couldn't!"

Marsha returned , her face as red as her cocktail dress , but not as red as her sore bottom .
Their guests spared her blushes by making no mention of her spanking , but  Samantha Boswell's curiosity eventually overtook her when Marsha escorted her to the powder room.

"How is your bottom Marsha? Rodney spanked you pretty good! " Samantha asked innocently.
Marsha smiled nervously and rubbed the seat of her dress ,  relieved by her guest's concern for her punished rear quarters , "Do you want to see Samantha ?" she replied boldly.

The powder room door was closed and the two giggling ladies huddled inside while Marsha hoisted her dress and leaned over the vanity.
She had opted for no undies so her full , glowing bottom was in full view.
"WOW! That is one red , sore bottom Marsha  !" Samantha gasped , "....but I think I have you beat ....pardon the pun!" she added , leaning forward herself to raise her own dress and revealing a blazing red bottom adorned with stripes from a cane and framed by a black garter belt and stockings.

"Daniel gave it too me good before we left ! He has a heavy hand and boy does that cane  sting!" Samantha stated proudly ,glancing over her shoulder at the marks on her plump bottom.
"I'm impressed Samantha!" Marsha agreed , "....a cane you say?"
Samantha nodded , "Daniel only uses the cane when I've been really naughty!" she gushed.

Samantha whispered in her new friend's ear ,"I really feel bad that we have you at a disadvantage Marsha." she said.
Marsha raised a brow , "How so?"
"Well...we had a pretty nice show of you being spanked  so the least we can do is return the favour!" Samantha said , marching  boldly back to the living room.

For the next few minutes Samantha went into full 'brat mode' , and it did not take long for Daniel to play along with her plan.
Excusing himself,  he scooped his wife under his arm , flipped up her dress and proceeded to give her already well marked bottom a brief but sound spanking before depositing her back on her feet.
"I'll finish this properly once we get home Samantha!" he announced.

"Yes Sir!" his wife replied , leaving her dress hoisted to so their hosts could drink in the sight of her freshly spanked bottom.
"There! We're even now ! " Samantha declared to Marsha.
"I do believe we are !" Marsha agreed.

Marsha and Rodney had dinner with the Howells quite a lot after that !


Posted by Glenmoretales at 8:33 AM