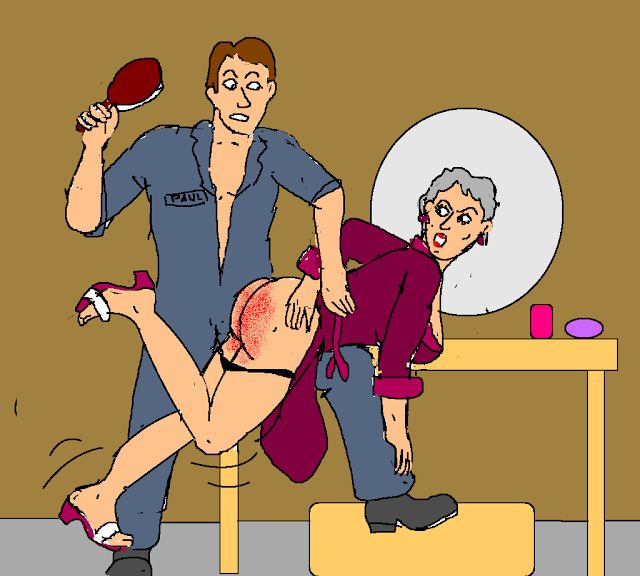 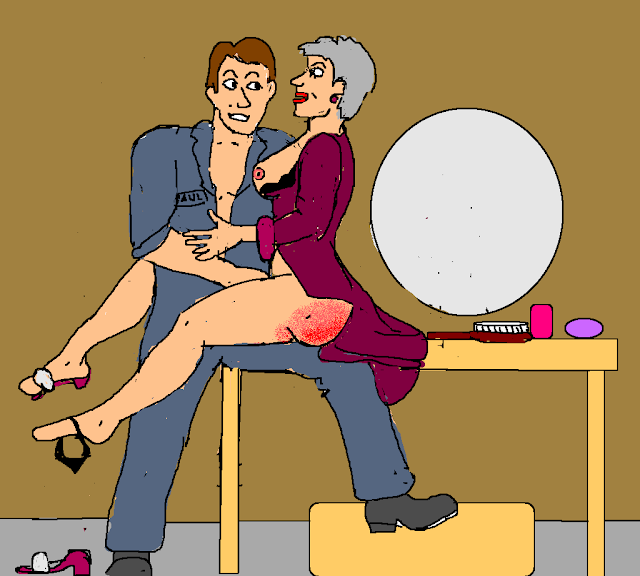 Paul shook his head when he examined the engine oil from his wife Beth's car.
It was dirty and thick as treacle ,indicating it had not been changed for months.

Moments later , Beth entered the garage with a cup of coffee for her Husband.
As usual she looked amazing and much younger than her 55 years,  her silk robe emphasizing her mature curves and offering Paul tantalizing glimpses of her cleavage and milky thighs.

She sat on the step and sipped her coffee , "So did you find the problem Sweetie?" she asked.
Her Husband's jaw tightened , "You mean problems Beth? The oil should have been changed months ago , the tires are low , the alignment is off , it needs a tune up , one headlight is shot and I really don't want to talk about the brakes !" he ranted.

His wife seemed unperturbed by his concern , "So will it be ready soon , we're leaving for the brunch in less than an hour!" she asked innocently.
Paul shrugged in disbelief , "Didn't you hear what I just said Beth? This car is not safe to drive....it's going nowhere until I've given it a full overhaul!"

Beth smiled , "Don't be silly Sweetheart....it's only a short drive to the restaurant,  we'll be fine. Now you'd best come inside and get out of those oily clothes......you know what happens when you keep us late!" she announced nonchalantly and made her way inside.

Paul could not believe his ears at how Beth had flubbed him off about the state of her car.
She was always the mature , responsible one in their marriage , but when it  came to cars she certainly was not!
"How could she let her car get into such bad shape, especially  when she was married to a car mechanic?" he thought to himself.
Not only that , after he had worked most of the morning on her car , she was actually blaming him because they were running late!

Then something else hit him. This was not just bout the car , it was about taking a stand. He was the expert on cars and was  advocating safety for them both , yet here was Beth overruling him ....quite arrogantly too.
Paul realized that he was usually the irresponsible one and Beth was the sensible one who kept him in line with a trip over her lap for a good old fashioned spanking with her hairbrush!
He had no problem accepting the spankings when he was in the wrong , but this was not the case today.
This was all Beth's doing!

He knew he had to take a stand on this issue or lose all credibility with his wife.
So after mentally preparing himself , Paul strode purposefully inside to find Beth sitting at her dresser applying lipstick to her full lips , "Beth we are not taking your car to the brunch and that is not negotiable!" he declared boldly.

Beth let out a chuckle and continued looking in the mirror , "So just how do you propose we get to and from the brunch Then Darling?" she asked him with a hint of contempt.
"We'll take my truck!" Paul replied curtly.

This time Beth turned her pretty face to confront him , "I am not driving anywhere in that old bucket!" she announced imperiously.
Paul felt a fury build up inside him at his wife's foolish and disrespectful response.
"Perhaps you Didn't hear me Beth...I said this is not negotiable . You're  car is not safe and it's  your own fault for letting it get in such bad shape.....an from now on I'll be checking it every week as you are clearly not responsible. We will be taking my truck to the brunch and that is final!" he declared bravely.

Paul actually felt a surge of confidence after he spoke .
He had never spoken to Beth that way before , but it had to be done.
For a moment Beth looked at him in disbelief , her jaw agape.
She knew Paul was right , but something inside her urged her to resist.
How dare he challenge her authority , perhaps it was their age difference telling her that she was not willing to relinquish any power to her much younger husband.....even if he was right!

"How dare you speak to me like that ! You're not the one in charge here young man. I'll give you 30 seconds to get out of those filthy overalls  and get over my knee! You need another dose of my hairbrush to remind you to be respectful!" she replied , reaching  for the ever present hairbrush on het dresser.

Paul was aghast at Beth's attitude and even more determined to stand firm.
It was true that he was the one who accepted the wrath of his wife's hairbrush on his bare backside as retribution for his misdeeds , but this time she was the one acting poorly!

He made a bold move by snatching the big brush from Beth's hand , "If anyone needs a spanking around here it's you Beth....and that's what I intend to do if you refuse to see sense!" he warned her , growing in his unfamiliar dominant role.

Beth was rendered speechless , so Paul took her wrist , raising her to her feet.
She looked defiantly into his eyes , "You wouldn't  dare !" she challenged .
Paul's confidence was soaring now and he was actually relishing his wife's feisty resistance.
"Oh you know I would dare Beth!" he replied , and she let out a girlish shriek when he tipped her over his outstretched knee.

Placing a hand on the hem of Beth's silk dressing gown he hoisted it up over her  shapely hips to reveal her delicious twin globes , framed in a tiny pair of black lace panties.
He happily skinned those down also to expose his wife's shapely derierre in all it's glory.

"Oooh! STOPPIT at once Paul! Let me up!" Beth cried indignantly.
Ignoring her , Paul raised his arm and snapped the brush sharply against Beth's right cheek.
He loved how her cheek jiggled and a pink oval appeared almost at once , "YEOOOW!" she yelped.

For the next few minutes Beth struggled wildly to free herself from Paul's iron grip as the brush continued to pepper het entire bottom, turning it a fiery red.
Her resistance eventually waned and she began pleading and apologizing as the heat in her bottom became unbearable.
"OK! OK! I'm sorry! I'm Sorry Paul! We'll take your truck!" she finally conceded.

Paul paused from his task and smoothed a palm over his wife's reddened cheeks noting  they were hot to the touch.
"Do you promise to listen to me and take better care of your car?" he asked  , and was both pleased and surprised at his wife's  response of , "Yes Sir!"
Paul hoisted  Beth onto  his lap , pulling her close and she  responded by kissing him passionately.
"I really need to get in the shower or we'll be late for the brunch Beth." Paul whispered.
"To hell with being on time....I'll join You!" Beth cooed , letting out a squeal when Paul scooped her up and carried her into the bathroom.

As expected , Beth and Paul were fashionably late for the brunch and Beth was pleased that it's buffet format would not require her to sit too much.
He bottom still burned terribly , but she loved it!
After filling her plate , Beth nestled close to Paul who wrapped a muscular arm around her.
"How is your bottom?" he asked her teasingly.
Beth pouted , "I think you know very well how it feels Sir....like its on fire!" She gave the seat of her dress a dramatic rub with her free hand , "That rough ride in that old truck of yours didn't help much you know... I felt every bump on my sore butt ! Your really should do something about that suspension you know, it's not safe !" she added.

Paul smiled , "So now you're an expert on car maintenance ?" he teased , "You're right though .....
I've been meaning to fix that for a while...." he confessed.
Beth grinned at him impishly ,"Really? That is really unacceptable ....especially for a car mechanic you know? I think we'll be having a little discussion about that when we get home!"
Paul blushed , "Beth ! You wouldn't....." he asked uncertainly.
Beth finished his sentence for hi , "I wouldn't DARE? Oh I think you know I would Sweetie!
You're going to find out just how uncomfortable it is riding in that truck sitting on a well spanked bottom....that will be just the motivation you need Sweetheart...."
Paul gulped and blushed.