We Need to Talk - A Spanking Story 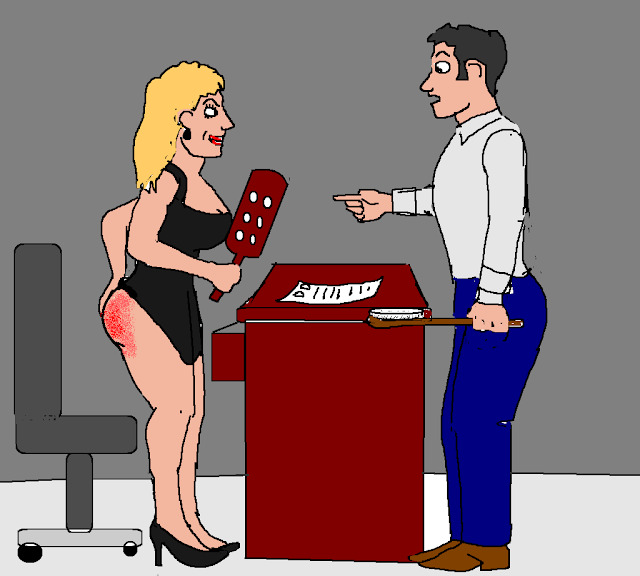 Nathan let out a sigh and stared into his beer glass.
"Why so glum Buddy?" his best friend Corey asked as he eased onto the barstool next to him.
Nathan forced a smile to welcome his friend . He always talked to Corey when he needed advice and he always seemed to have the right answers.
"Amy has invited me over for dinner tomorrow.....apparently we 'need to talk'! " he sulked.
Corey put a comforting arm around his friend , "Things must be getting serious between you two !" he observed.

Amy and Nathan had been together for over a year now and were clearly very much in love.
Everybody thought the pair were very compatible,  perhaps even the perfect couple.
"Well yes of course they are , and we have been talking about making our relationship more....serious." Nathan replied.

Corey shrugged, "That's probably what she wants to talk about then you big dummy....she wants to know if you're committed or not!" he concluded.
His friend shook his head , "No...she knows I'm committed....it's something else!"
This time it was Corey's turn to contemplate deeply before responding , "Well I can tell you that when Jenny tells me we 'need to talk' it usually means I've screwed up again  and I'm going to pay the price!" he blurted.

"Going to pay the price? What do you mean?" Corey asked , his mood changing.
"Weeelll...." Corey began tentatively , "....Jenny and I have a kind of ...uhm...'agreement'."
Nathan raised a brow , "An agreement? What sort of agreement?" he asked.
Corey drew a breath , "Well when we decided to get married we both realized I needed to make some big changes and shape up quite a bit , so Jenny had me sign a sort of 'contract' to make sure I had some ...er....let's say...'incentive' to change."

Nathan sat up. He was very interested now .
"It's called a Domestic Discipline agreement that lists all the things I need to work on and the consequences if I don't. I must admit it has helped our relationship and corrected a lot of my bad habits..." he confessed.
"What sort of conequences?" Nathan asked , nodding for Corey to continue.
"Well....if I screw up I get a spanking !" Corey confessed.
Nathan cackled , "A spanking? You mean like kids get?"

Corey frowned and shook his head , "Are you kidding? It's way worse than that. Jenny has one of those big bath brushes and she literally blisters my bare behind with it....I can't sit down for days!"
His confession produced a gaping jaw drop from Corey .
"SHIT !Jenny and Amy are best buds and talk all the time....do you think she wants me to sign one of those agreements too?" he asked.
Corey shrugged , "I wouldn't be surprised bud....let's be honest , it's not like you don't have some changes you need to make before you get married!"

The next evening , Nathan arrived at Amy's place armed with flowers , champagne and some knowledge of her possible intent.
Amy greeted him in her usual , bubbly and affectionate way , encouraging Nathan to think his concerns were unwarranted.
She gushed when he offered her the flowers and the champagne , "Oh Nathan...you're so thoughtful."
"This is for you too.....you might need it !" Nathan said , blushing as he offered Amy a long thoughtfully wrapped box.

Nathan smiled and made his way to sit at the romantically prepared table .
Candles , music and the smell of his favourite lasagna . Amy had gone all out .
However , Amy's sunny expression  suddenly morphed into a business-like tone.
"I thought we should have our 'talk' in a more formal place before dinner Nathan. Do you mind coming to my office?" she asked seriously.
Nathan gulped and his face  blushed  , "She is going to have me sign a DD contract!" he gasped to himself.

Nonetheless , he found himself following the seductive sway of his curvy girlfriend's hips , accentuated by her , low cut , little black dress and 4 inch heels , to her office.
As a Lawyer , Amy's office was well equipped to look like a typical law office , making the whole scene much more formal.
Nathan felt the power dynamic swing to Amy as she seated herself behind the large mahogany desk and motioned Nathan to sit before her.
As he expected , in front of her was a formal looking document .
Amy looked even more formal when she donned her large rimmed glasses and peered over them at Nathan.

In full Lawyer mood now , Amy pushed the document towards Nathan , "I don't wish to be too formal Nathan but if we are to be married we both know there are things that need to improved...." she began.
Her nervous boyfriend sat stiffly in the chair and braced himself .
".....a lot of couples are using agreements like this to improve their relationship by identifying areas for improvement and  correcting the problems ." she continued , ponting to the document in front of Nathan.
"I know what the document is Amy ,and I want you to know that I'm happy to sign it . In fact that's why I brought you this gift...." he interrupted nervously , pointing at the box Amy had left on her desk.
Amy raised a brow in puzzlement at her boyfriend , "You really should read thiis first Nathan." Amy advised , bring his attention to the document again.

Nathan persisted and was firmly focussed on the gift box he had brought.
"You may want to open it now." Nathan said.
"Ok."  Amy shrugged and reached for the box , carefully unwrapping it.
Her confusion was obvious when she saw the contents inside.
She looked carefully at the large bath brush and looked up at Nathan .
"It's the same one Jenny uses....with Corey...you know?" Nathan blurted.
"No I don't know Nathan." Amy replied firmly.

Nathan looked confused now , "Its ok Amy...Corey told me about their DD agreement....that is a DD agreement ?" he asked , his voice fading.
Amy smiled  , "It is a DD agreement Nathan , but perhaps you should read it first." she suggested.
His brow furrowing , her boyfriend leaned forward in his chair to study the document and then looked up at Amy in amazement.

"I know I sometimes act  poorly and can be very inconsiderate Nathan .... maybe it's my job that makes me like that , but that's no excuse. I'm so lucky that you're such a considerate guy , but frankly , you've been letting me off with way too much Sweetie." Amy said.
"If we are going to take our relationship to the next level , I need you to take charge Nathan . I need you to discipline me when I misbehave like that !" she blurted.

Nathan paused to absorb his girlfriend's surprising revelation , "You mean the DD agreement is for me to discipline you?" he asked.
Amy nodded , "Of course it is silly. Look I've listed all the offences you should be disciplining me for. Do you want to add any more?" she asked enthusuatically.

Still unsure , Nathan just shook his head prompting his girlfriend to stand to return her attention to the bath brush.
She rolled it over in her hands. "Well I must say I wasn't anticipating this Nathan ....but it's no more than I deserve I suppose!" she said , handing the implement to Nathan.

Amy stood up   , flipped up her skirt to reveal two enticing twin globes and bent over the desk.
"I'm ready when you are Nathan!" she declared boldly , her blonde mane spilling over her pretty face as she turned her head to face him.

Entranced by the sight of his girlfriend's gorgeous , scantily clad cheeks Nathan gratefully took up a position behind her.
"I'm not sure if I can do this Amy..." he said.
"Just think of all those times I've treated you so badly Sweetie , like when I kept you waiting for me outside in the rain for an hour last week !"she reminded him.

Nathan thought about that incident for a moment and recalled how Amy had not even offered an apology ,or  even a tinge of sympathy ,for his soaking.
She actually found it amusing enough to tease him!

Casting his eyes at Amy's awaiting bare bottom ,  he proceeded to scold her , "How dare you keep me waiting like that ....you've had this coming for quite a while and now you're gonna get it young lady !" he added , his confidence growing.
"Yes Sir!" an excited Amy responded.

The next thing he knew , Nathan was vigorously paddling his naughty girlfriend's jiggling bottom with the bath brush.
Amy was surprised at how much the bath brush stung , yelping and wiggling her bottom while Nathan turned it a glowing red.
"I'm sorry....I'm sorry....I'll be good....honest I will!" Amy howled.
Her glowing red  bottom confirmed to Nathan that his girlfriend's contrition was genuine, so he put down the brush and gently massaged Amy's delicious red  cheeks.

They were hot to the touch and she cooed with pleasure when Nathan pulled her close to him and their lips locked in a passionate , lingering kiss.
"That was one heck of a paddling Honey , but you do realize it wasn't legal?" Amy pouted  impishly.
"What do you mean ?" Nathan asked,
"Well Sweetie...you didn't sign the agreement so our DD arrangement is not legally enforcable yet. I'm afraid I have no choice but to use the penalty clause." Amy continued , morphing into lawyer mode again.

Nathan shook his head in disbelief as his girlfriend disentangled herself from his embrace and opened her desk drawer.
His jaw dropped when she produced the largest , wooden paddle he had ever seen!
Amy grinned and swished it through the air , "Get those pants down and bend over the desk Nathan. The agreement calls for 20 penalty strokes for that violation!" she beamed.