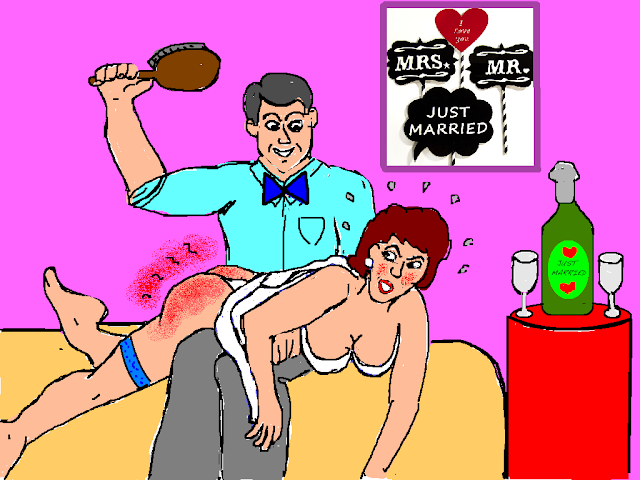 Gerry let out a howl of delight as he pushed open the door to the bridal suite and carried Sharon in.
Nursing a glass of champagne , Sharon kicked her legs playfully and squealed with joy.
After a whirlwind romance of six months Gerry and Sharon were now
husband and wife!

As her new husband popped open their complimentary bottle of champagne , Sharon flopped backwards into the softness of the huge feather bed.
"I can't believe we're married Gerry !" she sighed.
Gerry joined her in the bed and refilled her champagne glass.
Planting a kiss on his new bride's luscious , full lips Gerry felt like the luckiest man in the world.
Sharon was beautiful , smart and fun to be with.
She was also strong and tough , and had proved it by climbing to a Senior VP position in one of the biggest Insurance companies on the continent.

In fact it was at an insurance convention hat the pair had met.
Gerry held a much less important position as a salesman with a rival firm , but Sharon never ever put him down or even once let her position threaten their relationship.
Sure , she liked to brag about her accomplishments and put on airs , but the laid back Gerry didn't mind one bit.
She had worked hard to get ahead so why not flaunt it , he thought.

"I'll run us a nice hot bath " Gerry suggested , eyeing the huge Roman tub in their suite.
"Sounds great honey!" Sharon chirped back at him.
It would take a while to fill the tub so Gerry decided to have a shave and put on the soft robe provided by the hotel.
"Tub's nearly ready darling !" he called out , but Sharon did not reply.
After waiting a few seconds Gerry assumed his bride was napping to rest from the day's activities and went out to see her.

Sharon was certainly not resting.
She was pacing the room like an angry bear , ranting angrily into her cell phone at one of her employees.
His new wife was by her own admission a workaholic, but had promised Gerry to shut it from her mind during their honeymoon.
Clearly bad habits were difficult for her to break.

The conversation Sharon was having was so intense that Gerry could not interrupt even if he tried.
He knew Sharon was an aggressive boss but he had never heard her bully people like this before and was quite surprised.
"Just get the f****** contract signed and don't dare call me and tell me there's still a problem ..... do you understand ?" Sharon bellowed into her phone.
"IDIOTS!" Sharon fumed as she closed the phone.

Gerry stood there in silence until he caught Sharon's eye.
"Sorry dear …..we had a bit of a crisis at the office..…" she said and started dialing another number.
"We had an agreement you'd leave work at home Sharon !" Gerry said as firmly as he could.
Sharon ignored him and kept dialing.
"Go ahead and enjoy the bath Sweetheart ….I have to deal with this !" she replied abruptly without even looking up.

For the first time Gerry felt his face flush with anger at Sharon .
"Goddammit …it's our honeymoon Sharon !" he shouted.
Sharon paused to look at Gerry indignantly.
"How dare you speak to me in that tone Gerry ….can't you find something to do until I'm finished with this ?" she fired back arrogantly.

Her tone was the same as the one Sharon had used to berate her employee.
Controlling his anger , Gerry stormed into the bathroom , dressed and headed to the hotel bar for a drink.
As he walked out Sharon was too deep into another call  to even notice his departure.

"Been to a wedding ?" Ted the barman asked Gerry as he handed him a double whiskey.
"Yes I'm the groom !" Gerry replied gloomily.
Ted was at least 20 years older than Gerry's 40 years and was always happy to share his wisdom and offer advice to the patrons.
Gerry sipped on his drink and felt better after telling an attentive Ted his story.

Rather than comfort him , Ted ddelovered a stern lecture for cowering and hiding from his wife instead of standing up to her.
"You've only been married a few hours Gerry and she's already browbeating you ? What will it be like in 5 , 10 or 20 years ?" Ted asked.

Gerry shrugged , "You don't know Sharon Ted. ...she's stubborn and tough...what am I supposed to do?" he replied despondently.
Ted was getting fed up with Ted feeling sorry for himself so really let him have it.
"I'll tell you what you should do Gerry....  stand up to her !
Women like Sharon are longing for a real man who will put them in their place , believe me.... does she own a hairbrush ?"

Gerry raised an eyebrow at Ted's odd question.
"A hairbrush ? ….why sure she does………. Sharon has beautiful long hair so she always has one nearby ….why ?" he asked.
Ted leaned forward and spoke quietly in Gerry's ear.
"Go back up there , take that phone from her and throw it in the garbage.
Then get that hairbrush , take her over your knee and give her a good old fashioned spanking ....on her bare bottom …….hard...with the back of the brush…and don't stop until she's apologising you and bawling like a baby !"

It took a second for Ted's words to sink in but Gerry realized he might be right.
If he didn't stand up to Sharon now he was going to be her doormat for the rest of their marriage.... which wouldn't be very long !
"It was risky but worth a try...what did he have to lose?" he thought.

Energized and excited Gerry pushed his drink away and stood up.
He put a grateful hand out and Ted shook it.
"Thanks Ted! Here goes  !" he declared .
"Good luck son." Ted said , as if speaking to a son who was about to go into battle.
In a way Ted felt like he was!

Walking confidently , Gerry strode purposefully back to the bridal suite and stormed in.
A surprised Sharon had no time to react when he took hold of her wrist and wrenched her phone from her.
"I'm sorry but Mrs. Gibson is on her honeymoon and won't be available for any calls until she returns !" Gerry said firmly but politely into Sharon's phone before tossing it into the garbage can.

Sharon stood with her mouth agape.
"What the hell do you think your doing Gerry ?" she asked indignantly.
Gerry tightened his grip on his new wife's wrists and reached for the biggest of Sharon's hairbrushes from the nearby dresser.
It was a large , oval shaped , wooden one.
"This will be perfect!" he said to himself.

Sharon struggled frantically to free herself from Gerry's iron grip, "Gerry…..what's come over you? Let me go this instant…. and.... .what are you doing with my best hairbrush ?"
Gerry simply marched his new bride over to the bed , sat down on the edge and easily tipped Sharon face first over his lap.

Sharon was starting to worry now as she struggled on Gerry's lap , "Now Gerry….stop this nonsense immediately….don't you dare !" she yelled.
Gerry was clearly enjoying being in charge , not to mention the glorious sight of Sharon's round , shapely bottom and long curvy legs as she lay over his lap.

She wore a long blue satin party dress which had shifted up to her upper thighs,  revealing the tops of her black stockings.
Remembering Ted's advice , Gerry hoisted her dress  to reveal two enticing , jiggling globes of white flesh encased in a seductive pair of black , sheer panties and a garter belt.

Sliding his fingers in the waistband of the tiny panties , Gerry eased them down to reveal his wife's magnificent bare bottom.
"Oooooh! How dare you ! Let me up this minute Gerry....I'm not joking!" Sharon cried indignantly , pounding her fists into Gerry's strong legs and kicking her legs in a futile struggle to
escape.

Gerry picked up the hairbrush and eyed the target before him.
Raising the brush high over his head he brought it down smartly on Sharon's right cheek.
The loudness of the smack surprised both of them and Sharon cried out as the sting set in. "YEOOOOW ! THAT HURT !"

As Gerry prepared for the next blow he noticed a red oval start to appear on Sharon's skin where the brush had landed.
Again and again Gerry brought down the brush on his bride's bare bottom turning it pink , red then a deep crimson.
Sharon's angry threats eventually  turned to pleading , and then to apologies as the spanking took its toll on her physically and mentally.
Her bottom felt like it was on fire , but she was also feeling a therepeutic release..

`THWAAP!! `
"OOOOOWWW!"
rrrrrriiinnng!
"Please Gerry..…..that's my phone…it could be important! " a still stubborn Sharon begged frantically pointing to the ringing garbage can.
"Perhaps you'd like me to answer so they can listen to their Senior VP getting her naughty bare bottom spanked ?" Gerry asked before continuing Sharon's spanking with added  venom,

Gerry helped Sharon up , and she winced when she winced when he sat her uncomfortably on his lap.
He wiped her tears away and pulled her close to him.
Sharon responded by snuggling into Gerry's arms.
"It's about time....I  guess I had that coming Sweetheart." she sobbed,  kissing Gerry on the lips.

As the happy couple embraced again they heard the sound of dripping behind them.
"OMIGOSH THE TUB!" Gerry yelled and they both scurried into the bathroom to turn off the taps.
They both giggled like teenagers and Sharon hurriedly wiggled out of her dress , kicking  off her heels .
"Don't want to waste that water do we dear ?" she said pushing her new husband into the tub before climbing on top of him.

Later that evening , Gerry took his radiant bride to dinner , "How about a drink at the bar first?" Gerry suggested.
Sharon planted a sloppy kiss on her new husband's cheek , "You're the boss Sweetie." she cooed.

Ted stood behind the bar wiping a glass as the happy couple approached and grinned when Sharon let out an involuntary little yelp when she planted her derrierre on the barstool.
Gerry flashed a grin at the smirking barman , "Why don't we just lean at the bar for our drink Honey?" he suggested to his sore bottomed bride.

Ted prepared the honeymooners their drinks , "These are on me!" he smiled ...."Try a little bath in epsom salts later Madam....it works for my wife." he added looking directly at Sharon.
Dumbstruck , her jaw dropped and she looked up at Gerry who just smiled and shrugged , "Sounds like good advice to me Sweetheart!" he offered nonchalantly.