Nora scowled at her Husband Ted who sat fidgeting nervously on the sofa across from the two women.
"So Ted....is this true? Do you have anything to say for yourself?" she asked firmly.
"Er...uhm...no...I guess not ." Ted mumbled , his gaze transfixed on his shoes.

Nora had suspected for years that her Husband had been siphoning funds from their bank account to fund his gambling habit but could never prove it , until Special Agent Paula took the case.

Paula was very selective about the cases she took on and her terms were unusual to say the least.
The Agent expected no monetary compensation , just assurance that the miscreant be dealt with according to her instructions.

To be honest , Nora had no idea how to deal with her Husband once she had confronted him with the indisputible evidence of his misdeeds , but Agent Paula provided her with very specific instructions that she was actually looking forward to carrying  out.

It was certainly going be a very humbling and embarrassing experience for Ted to be stripped naked and severely  admonished for his behaviour and then going over her lap for a lengthy , humiliating and painful spanking with the 'special' hairbrush Agent Paula presented to all her clients.

Agent Paula raised a finger when Nora looked over at her for approval  "If I may Mrs. Drayton. It's very important that your Husband responds to you in the correct manner...." she began.
The older woman raised a brow , "The correct manner?"
"Yes. He must refer to you as Ma'am and he must understand that it is very disrespectful for him not to do so .It also sends him a clear message that you are in charge from now on." Paula concluded.
"Did you hear what Agent Paula just said Ted?" Nora scolded in a raised voice.
"I meant No Ma'am!" Ted quickly corrected.

Agent Paula stood up , "Well I do believe my work here is done  Mrs. Drayton ...... I'll leave you to deal with your Husband."
"Of course ..." Nora replied , "..... but surely you must allow me  to compensate you for being so helpful."
Agent Paula shook her head , "Monetary compensation is not necessary Mrs. Drayton. You know my terms. A well blistered bottom for your husband will be compensation enough."
"Are you sure ? It doesn't seem enough  you for saving our money....and marriage." Nora told her.

Paula held out her hand and Nora shook it , "Just make sure when you deal with your Husband you do it a I instructed Nora ."she replied.
"Don't worry about that Agent Paul!" Nora told her..." I've already left the bedroom window open !" Nora replied excitedly.
"Witnessing your Husband receive his retribution willn give me all the reward I need for the fruits of my labour." Paula added.

Nora smiled  , "The way he's behaved I ought to take him out to the front porch so the whole neighbourhood can watch me blister his behind!"
"That certainly would send a message to similar minded husbands !" Paula giggled.

Nora turned to her Husband and confronted  him with hands on hips.
"Well mister ? What are you waiting for? It's pretty clear what's in store for you so go upstairs and get ready because I can tell you it's going to be bad ....very bad ! I am going to blister your backside raw and enjoy every minute of it !"
"Yes Ma'am." her husband replied , hastily jumping to his feet and scurrying upstairs.

Outside Paula closed the file folder and took a tiny camera from her bag , "Another case closed." she said proudly before ascending the ladder her client had laid out to  take up her position by the Drayton's bedroom window.

As promised , Nora had left the drapes open to give Paula a clear view of the room.
Paula made no attempt to hid her presence and was acknowledged with a nod from Nora when she took up her own  position on the edge of the bed , hairbrush in hand.

An embarrassed Ted did not notice the witness to his punishment  until he had disrobed and turned to face his wife .
His face flushed , jaw dropped and his hands immediately dropped  to cover his privates.
Nora quickly admonished him , ordering him to place his hands on his head while she addressed him.

"Does she have to be able to watch  this ?" Ted protested , flicking his head at the grinning witness.
His wife smiled wryly "This needs to be recorded Ted and the pictures and videos  of me roasting your bare backside will be my little 'insurance' policy in case you are tempted to deceive me again. I'm sure all your friends ,family and work colleagues would enjoy seeing them!"
Paula giggled and pointed her camera to take one of many photos to place in the Drayton file ,   proof of  another case closed. 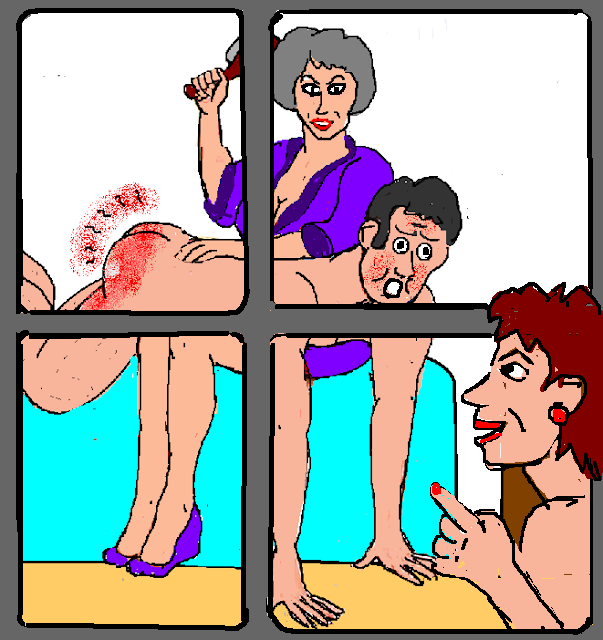