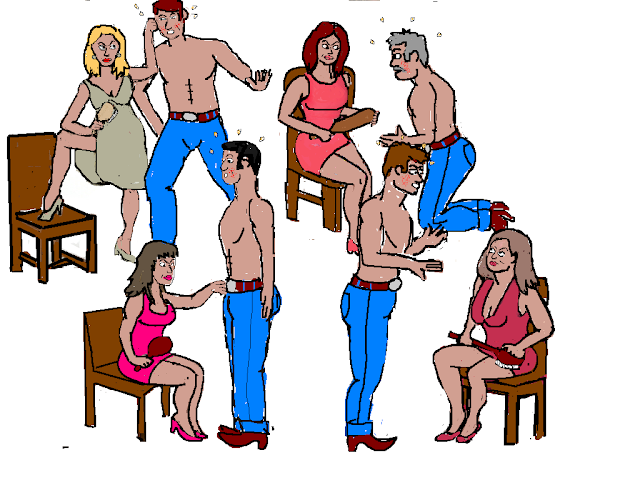 Clint waved at the barmaid and held up the empty beer jug , " A refill Nancy please!" he yelled to cheers from his rodeo friends.
His diminutive blonde girlfriend Jennie stood up , took the empty jug from her surprised boyfriend and signalled  to Nancy to cancel the order.

"I think that's quite enough Clint.Finish your beer and then it's time we went home.I'm tired and have a big day tomorrow." she reasoned.
Clint was disappointed ... as we're his gaggle of tipsy friends.
"Aw come on Sweetheart....just one more jug and then we'll go." he asked.

"You heard me Clint ! Drink up and let's get going..." Jennie replied with a hint of firmness in her tone.
"Best do what the little lady says Clint!" his pal Russ  teased to cackles from his friends.
"We all know who wears the pants in your house Clint!" another hollered.

His pride hurt , Clint tried to save face by boldly signalling to the barmaid again.
This time Jennie grabbed hold of his ear and pulled his face close to hers ,"Clint ! I said we're leaving now ....and you'll be getting another dancing lesson once we get home for defying me like that ! she warned him.
Clint's face reddened and his demeanour softened , "AW Honey! No...please don't..." he pleaded.

To add to the big Clint's injured pride , his girlfriend tightened her grip on his ear and gave it a firm tweak, " I said let's go Clint!" she scolded , tugging his head lower .
"Ouch!" the big Cowboy yelped , exploding the room into derisive laughter as the petite Jennie lead her husky boyfriend to the door.

Enjoying herself now , Jennie winked at her friend Lucy , smiled impishly and then delivered 3 sharp smacks to the seat of Clint's tight jeans .
"Ouch!" he yelped  , hopping comically and putting a hand back to defend against more smacks.
"Move it mister!" Jennie scolded giving him a final shove to propel him outside.

Lucy giggled and looked up at her boyfriend Russ , "Looks like your buddy Clint is in for another dancing lesson from Jennie!!"
His brow furrowing , Russ looked down at her , "A Dancing Lesson? I didn't know Jennie was giving Clint dancing lessons...." he said.
Lucy shook her head , "It's a metaphor silly!" she lectured.

The furrow in her boyfriend's forehead deepened , "A meta...'metawhat'?" he asked.
His girlfriend sighed and eyed him impatiently , " A 'metaphor' Russ....a figure of speech....Jennie's not literally giving Clint dancing lessons...."
"Then..... why did she say she was?" Russ asked curiously.
Lucy sighed again  , "She really means she's  going to give him a darn good spanking!" she announced.
Her boyfriend's jaw dropped , "WHAT! A spanking?Seriously?" he gasped.

"Yessir! The only dancing he's gonna be doing will be a lot of kicking and wiggling when he's over Jennie's lap getting his  bare bottom spanked like a naughty little boy. If you don't believe me , just watch him tomorrow when he tries to sit down.... ..or better still ,have a look when he's in the shower....his backside will still have the marks from Jennie's hairbrush!" Lucy added.

Russ shook his head in disbelief.
"Actually Russ , you're going to find out for yourself because tonight's 'dancing lesson' is going to be  a group one.....isn't  it ladies?" Lucy announced to the  trio of other ladies mingled around her.
"That's right Lucy ! Give us a few minutes to round up our naughty boys for their dancing lesson....this oughta be fun!" Shelly cackled.

Once home , Jennie wasted no time in demanding her handsome cowboy strip to the waist and stand before her in his tight denims .
She caressed his rippling muscled torso , glistening with sweat and Clint pulled her close ,pressing his lips on hers and scooping her up in his arms.
Jennie put a warning finger on his lips ? "Uh-Oh big guy....not so fast.I promised you a dancing lesson and that's what your gonna get!" she smirked.

"Aw Jen...not tonight...please ?" Clint complained.
His girlfriend regarded him sternly , "Put me down Clint and go fetch my hairbrush." she said firmly.
Jennie chuckled to herself when Clint reluctantly set her down ,instinctively rubbing the seat of his jeans in anticipation of what was to come.

Jennie loved how her tough cowboy had channelled into a naughty, pouting  schoolboy by the time he returned cradling her hairbrush in his big hands .
As  she gratefully took the brush from him , Clint noticed there were 4 chairs in the middle of the room.

"What's going on Jen?" Clint asked , scratching his head as he surveyed the chairs.
Before Jennie could answer , the doorbell rang.
"Can you get that Sweetie?It will be the other dance partners."
she announced nonchalantly.
"Dance partners?" Clint asked.
Jennie studied her reflection in the polished wood of the hairbrush as she rolled it over in her hand.
"Lucy and I decided it was time for a group 'dancing lesson' for you guys  and all the other gals were real keen to join!" she announced.
Clint's jaw dropped and the doorbell chimed again.
"Don't keep our guests waiting Clint!" she said firmly , wagging the brush at him menacingly,

While Clint answered the door , Jennie made herself comfortable on one of the big chairs.
A crescendo of heels clicking on the wood floor accompanied by excited female  shrieks and giggles echoed from the hallway.
Lucy led the other two ladies into the room to join Jennie in a circle of disciplinary ladies.

Clint trundled in , followed by his partners in crime who were all very subdued and contrite.
Like Clint , all three men were red-faced and stripped to the waist .
With the ladies now comfortably seated with their spanking implements on their shapely laps , Jennie announced "Welcome to the first gathering of the Grandville Ladies Spanking Circle Gentlemen!"

"Spanking circle ? What are you gals talking about ?" Russ asked .
"Once a month our circle of ladies will meet to discuss 'domestic discipline'......and to give you gentlemen what you richly deserve. Given that you all continue to behave childishly , disrespectfully and don't listen to us... you will be going over your significant other's lap for a darn good spanking !" Lucy explained to the gents.

"You see we ladies have been talking  , and it appears that each of you are not strangers to a good bottom warming.....isn't that so Gents?" Shelly added.
The men flushed red and looked at each other nervously.
"Well Guys? Shelly asked you a question?" Maryanne prompted sternly , "You first Dwayne!" she pointed at her shaken boyfriend.
"Well Yea.....you know you spank me Maryanne!" he blurted in response.
Maryanne waved the big bath-brush , "He hates this....but I love it....don't I honey?" she teased.
"Yes Ma'am!" Dwayne replied shyly to cackles from the ladies.

"Curtis?" his girlfriend Cindy asked sternly.
He hesitated to reply but his girlfriend jogged his memory by tapping her big mahogany clothes brush against her palm.
"Yes Ma'am. You spank me all the time with that darn thing!" he confessed.
Cindy grinned proudly , "Does it hurt your little bottom Curtis?" she asked .
"Yes Ma'am it does." her subdued boyfriend mumbled.

Clint decided not to wait for Jennie to prompt him , "I know you guys think Jennie's been givin' me dancin' lessons but she's actually been giving me a darn good spanking!" he declared , almost proudly.
"Good boy Clint!" Jennie applauded.

A quartet of female index fingers curled in unison to beckon their naughty boys to them.
As their men stood silently and obediently before them, the ladies eagerly undid their belt buckles and yanked down their jeans.

Jennie signalled to Lucy , "Set the timer for 5 minutes Lucy please!" she asked.
Lucy adjusted the kitchen timer and placed it on the floor , "Ready when you are ladies!"" she announced.
Patting their laps , the ladies invited their humbled boyfriends to take their positions over their lap.
"This is how our spanking circle is going to work gentlemen...." Jennie began ,".... Lucy will start the timer and we are going to blister your behinds hard and fast until the buzzer goes. Then you will get up and place yourself over the next ladies lap in a clockwise direction. Lucy will start the timer again and you will get another spanking. We will repeat until each of you have completed the circle two times....understood!"

While the ladies giggled excitedly , the cowboys did some quick calculations in their heads.
"....B..bb...but isn't that 40 minutes of spanking ?" Curtis asked.
His girlfriend scowled , "That's right Curtis....would you like to do another circle to make it a full hour?" she asked.
"NO MA'AM!" the four men replied together.
"Shall we begin ladies?" Jennie asked.
Lucy pressed the timer and the inaugural session of the Grandville Ladies Spanking Circle commenced !