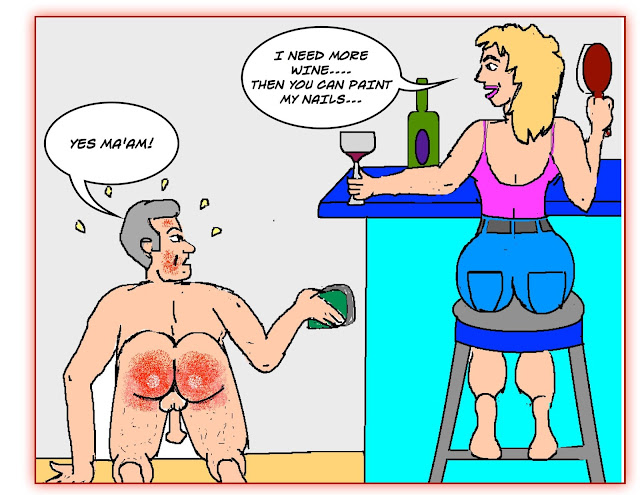 Kate sat comfortably at the breakfast bar while Roger knelt on the floor scrubbing vigorously "I want to be able to see my reflection in that floor Roger or you'll find yourself back over my knee! she declared firmly."Yes Ma'am!" Roger replied.

She stretched her neck to inspect her husband's work before nodding her approval.
"Can't you see that my wine glass is almost empty? Are you neglecting me again?" she scolded.
"No Ma'am. Sorry Ma'am!" he replied , promptly rising to replenish her glass.
"That's more like it !" Kate remarked.

Kate waved the hard wooden brush at Roger  , "Alright then Mister....are You ready for the rest of your spanking?"
"Yes Ma'am!" Roger responded.
Kate regarded her husband's already reddened rear with satisfaction " You poor thing! Your poor bottom must be so sore....but it's gonna be sorer!" she teased.

Carefully placing her wine glass on the counter , she patted her lap "Get over my knee young man.......I am going to blister your butt !" she announced .
Her naked hubbie carefully draped himself over her inviting lap.
Roger winced when she raked her long nails across his tender rear before raising her arm and snapping the back of the brush against Roger's right cheek.
Kate giggled at Roger's girlish yelp.
"You're not such a big shot now are you mister?" Kate admonished

Alternating from cheek to cheek , she snapped the brush against Roger's red cheeks  , producing loud yelps and howls from her humbled husband.

Roger struggled to stay in place , squirming and kicking his feet as the brush descended again and again , transforming his already red cheeks to a smouldering dark crimson.
Kate was determined to make sure her naughty husband would not be sitting comfortably for days!
It would be so much fun teasing him about his reluctance and inability to sit and reminding him it was all her work.

Satisfied with her work , Kate released her grip ,"OK that will do for now but you've still got a good leathering to come later!" she announced .
"Yes Ma'am!" Roger replied , just relieved his ordeal was over .....for now.

Kate sat back on her chair , beaming proudly at her handiwork.
"That's what happens to Chauvinists young man!" she teased , giving his bare butt a final , resounding smack which made him hop .

She pointed to the floor , "Back to work Mister!" she ordered.
"Aw...do I have to Ma'am....it's gleaming!" Roger protested , furiously rubbing his rear.
Instinctively he dropped to his knees and began kissing and caressing his wife's bare feet.
"Well maybe there is another task you could do for me.....in the bedroom ..." Kate cooed.
"Anything you desire Ma'am!" Roger replied.

The next morning , Kate awoke to breakfast in bed from her still subservient and contrite husband.
Kate chuckled when she saw Roger's red and still very sore backside.

"I think I'll need to give your bottom a touch up Honey," she teased , "Go fetch the bath brush."
"AW No Kate! Not the darn bath brush...it hurts like heck and my behind is aleady so sore!" Roger pleaded .
Ignoring his please , Kate continued to nibble at her toast before replying, , "If you prefer , I could have you get over my knee for another dose of my hairbrush ....before your 40 big ones with the bath brush ?"
Roger sighed and his shoulder slumped before he reluctantly trudged to retrieve the bath brush.

A short while later , Roger stood at the sink washing the breakfast dishes ,wearing nothing bit one of Kate's aprons and his mult-colored rear on full display. .
"Hurry up Sweetie .My girlfriends  will be here soon , and you wouldn't want them to see  your sexy red butt in that little apron would you?" Kate giggled.

Roger panicked at his wife's announcement , "WHAAT? You didn't mention anything to me about that? he protested.
Kate laughed , "Silly boy! Who did  you think all that wine and appetizers were for ?  ....and make sure you wear those tight pants I like.!" she added.
Roger's brow furrowed , " I'm staying? I don't want to sit here chatting with you girls ....especially since my butt is way too sore to sit !" he replied indignantly.
Kate giggled again at his response , "Oh you will be staying alright , but don't worry about sitting Darling....you're going to be way too busy serving us to sit ! Now go upstairs and lay out the strap before you get changed !" she barked.