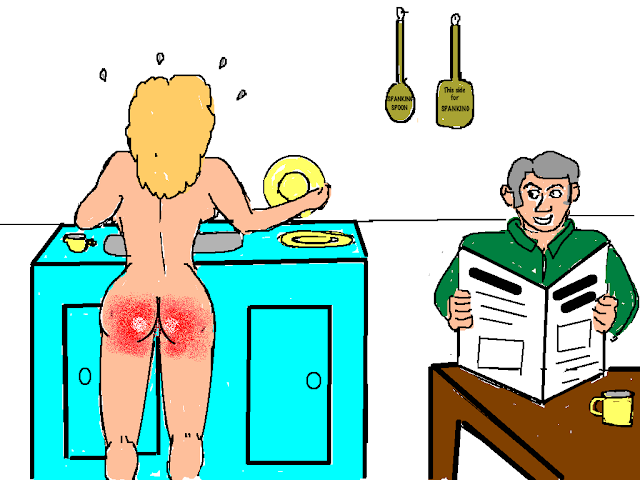 Roger stood with hands on hips as his wife vacuumed the bedroom, "Did you vacuum under the bed?" he asked firmly."Yes Sir!" Kate replied.
Her husband  inspected the freshly made bed before nodding his approval.
"Are the dishes done and put away?" he asked.
"Yes Sir!" she replied.
"....and the bathrooms?"
"All cleaned Sir!"

Roger  scooped up the  big wooden spatula he had brought from the kitchen and sat on the bed , "Alright then Missie....are You ready for your spanking?"
"Yes Sir!" Kate responded.
Roger teased his wife by tapping the spatula against his palm , "Ouchie! This is gonna sting!" he grinned.

"Get over my knee young lady.......I am going to set your butt on fire!" he announced , tapping the spatula again for emphasis.
His naked wife carefully draped herself over her husband's lap.
Massaging her shapely , smooth , lily white cheeks he knew  they were not going to be white for long!.

Then , raising his arm , he brought the spatula  down smartly on Kate's right cheek.
Both were surprised  , Roger at the loudness of the  'WHACK!', and Kate at the sharp sting in her rear.
He loved the way Kate's round globes jiggled and wobbled upon impact.

Alternating from cheek to cheek , Roger snapped the brush against his target , producing loud 'WHACK 's' and lots of high pitched shrieks , "OW's!" and "OUCH's" from his squirming wife.

Kate was struggling to remain in place as the burning in her cheeks mounted.
The spatula had already transformed both of those cheeks from that Lily white hue to a glowing red.
For his part , Roger was thoroughly enjoying himself and 'warming' to his task.

He was determined that his naughty wife  would be feeling the effects of this spanking for the next little while !
It was going to be fun teasing her later . when he spotted her rubbing or  wincing when she sat , and reminding her that he was responsible for making her bottom so tender.
While Kate gritted her teeth and wished for the spanking to end , Roger had no intention of ending it anytime soon.

However , he did allow for a couple of pauses to let Kate catch her breath .
During each break  , he lectured her  , reminding her why she was over his lap having her cute bare bottom roasted.
Finally , Roger decided It was time to bring Kate's spanking to a conclusion.
"OK ! You've got 10 more coming and they're gonna be real stingers...." he announced , ".....and you're going to count  and thank me for each one!"
"Yes Sir!" Kate replied , clenching both cheeks and tightening her grip on her husband's leg in anticipation.

'WHACK!'
"ONE! THANK YOU SIR!"
Roger made sure each of the final 10 stingers landed on the spot where Kate would feel it most when she sat.
He could tell by her shaking , trembling voice that he had done a thorough job.
"TT..TEN! THANK YOU SIR !" Kate gasped with relief when the final spank landed.

Roger grinned and carefully inspected his handiwork.
His wife's bottom was a fiery ,bright red , her skin hot to the touch.
"That ought to do you for a while young lady!" he teased , giving her butt a final , playful smack.

Releasing his grip he allowed her to get up.
He could not help laughing when Kate performed a cute little spanking dance,  hopping around , rubbing her bottom shrieking , "OH OH OH OH OMIGOSH THAT BURNS!"
"You're not finished yet Missie !" Roger said , undoing his pants.

"It's  time you thanked me properly!" he said , undoing his fly.
Still rubbing her sore rear , Kate dutifully dropped to her knees , began caressing her husband's member before opening her mouth wide , sliding her lips slowly down his shaft.

Tossing his head back , Roger gasped with satisfaction.
Here was his beautiful  naked wife , kneeling before him ,her head bobbing , lips wrapped tightly around his penis and her bottom bright red from the spanking he had just administered.
The sense of power was intoxicating for Roger , as was the sense of serving for Kate.
She gobbled hungrily at his shaft sending him int a frenzy.
After a few minutes , Roger exploded in her mouth and Kate  gulped and swallowed his load , anxiously licking and sucking up any residual with her lips.

Placing a palm on his wife's gloriously glowing red cheeks , he could feel the heat rising from them.
"God your good!" he exclaimed.
"I know!" Kate replied , her eyes looking up at him impishly.
Snuggling closer she gave her husband a hug and they both kissed passionately.
"Hmmm....I wonder if there is anything else you can do for me today ?" He mused with a grin.
"I'm sure you'll think of something...." Kate giggled.

The next morning , Roger awoke to breakfast in bed from his adoring , and still naked wife.
Kate planted a sloppy kiss on his forehead before placing the tray , complete with a newspaper, on his lap.
Raising a finger , Roger twirled it in a circle ,  gesturing for her to turn around.
He smiled with satisfaction when he noted his wife's bare bottom still bore a nice pinkish and red hue from the spatula.

"I think I'll need to give your bottom  a touch up Honey," He teased.
Kate glanced over her shoulder to examine the damage , "Don't you dare! It's sore enough!" She replied.
"I'll be the judge of that!" Roger warned , wagging a finger and taking a sip of his coffee .

He pointed to the hairbrush sitting on Kate's night table , "Once I've finished eating , your bare butt will be taking the place of this tray and you'll be getting a taste of that!!" he warned her .
"AW No Roger! Not the hairbrush...pleeeze?" she pleaded ,stamping a foot and rubbing her tender bottom.

Roger did not even pause from his breakfast , "If you prefer , I could have you bend over for 20 big ones with the bath brush instead ?"
Kate shrugged with a scowl   ," No Sir, I would not prefer that thank you very much..."
Her response spawned an impish grin from Roger, " You really hate that bath brush don't you ?" He said before biting into his toast.
His wife nodded nervously.
"Then the bath brush it is!" he announced.
"AW SHIT!" Kate exclaimed.

A short while later , a still naked Kate stood at the sink washing the breakfast dishes while Roger sat at the table browsing through the newspaper .
Occasionally he would glance  over at the myriad of shapes , colours and textures that dreaded bath brush had painted on her bottom.
A smile spread on his face when he saw Kate shifting uncomfortably and placing  a palm back to comfort her roasted rear .
"Hurry up Honey .The guys  will be here soon to watch the game , and while I'm sure they would be thrilled at the sight of your cute little red caboose , it may be a tad embarrassing for you!" he teased.

Kate panicked at Roger's announcement , "WHAAT? You didn't mention anything to me about that? she protested.
Roger laughed , "Silly girl! Who did  you think all that beer and snacks were for you?  ....and make sure you wear those  tight skinny jeans I like.!" he added.
Kate's brow furrowed , " I'm staying? I don't want to watch the game....and my bottom is way too sore to squeeze into those jeans !" She replied indignantly.
Her  response produced another cackle from Roger , "Why of course your staying Sweetheart.....you are going to be our server! Now go get changed before I get the wooden Spoon!"