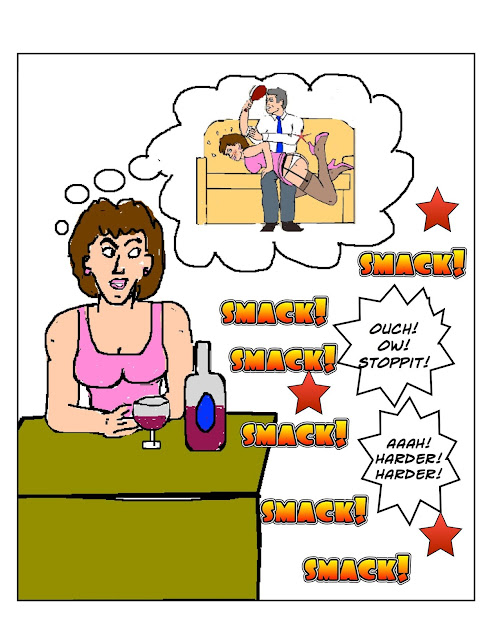 'DING-DONG!'
"Saved by the bell!" Sharon grinned  when she heard the doorbell ring.
She was surprised when Colin ignored the repeating chime and continued to steer her toward the bedroom.
"Aren't you going to see who that is Darling?" she asked anxiously.
Her Husband closed the bedroom door and scooped up one of his big leather slippers , "Whoever it is can wait until I'm finished warming your bottom!" he replied , seizing her wrist and tugging her across his awaiting lap.
"No ! Wait a minute Colin....they'll hear!" Sharon pleaded.

A smile appeared on her face when Colin sighed , reluctantly restoring her raised skirt.
"You're right....you'd better answer it!" he said , allowing her to slither off his lap.
Sharon rushed to open the door and was delighted to see her sister Kate .
"I know it's late , and I wasn't sure whether Friday night was still your 'date night' ...but I figured you wouldn't answer the door if it was!" she giggled .

"Oh we stopped doing that  date thing months ago.....we were just having a quiet night in front of the Television. Come on in!" Sharon gushed.
Colin was much less enthusiastic about his Sister-in-Law's untimely visit than Sharon and it showed.
"Your sure this is not a bad time ?" Kate asked.
Sharon replied , smirking at Colin , "Actually your timing was perfect Kate!"

"Well actually....we were in the middle of something  Sweetie?" Colin said .
Kate let out one of her loud trademark cackles , "Don't tell me you've been a naughty boy again Colin?" she teased .

Colin stood up, hauling a sheepish Sharon to her feet.
"Not this time Kate! There's wine in the fridge .....help yourself....we won't be long!" he said curtly.
His petite wife was outraged , "Don't you dare Colin...not with my sister here....I'll get you for this ...EEEEK!" she screeched when Colin tossed her over his shoulder and carried her , feet kicking and fists pounding , to the bedroom.

Kate shook her head and poured herself a glass of wine , "This should be interesting!" she laughed.
For a full 10 minutes she enjoyed her drink while listening to the leather slipper slapping loudly against her sister's bare bottom.
Sharon was defiant and feisty at first , "Don't you dare Colin!" "You'll pay for this so help me !",
but she became more and more contrite as the fiery spanking took its toll , "I'm sorry...please stop....I'l be good!" "Please stop!"

After the spanking , Kate listened with great interest as the sounds of a spanking transformed into  sounds of passion.
Her sister was no longer asking her husband to stop ...no...now she was howling for more!
"HARDER! HARDER  FOR @$%^@@ 'S SAKE COLIN!"
"OOW GOD! MORE! GIVE ME MORE!"

Kate tried to picture the scene in her head and felt herself moisten.
On the outside Kate was a tough , no nonsense lady ....but deep down she longed for a man to give her exactly what her sister was getting.
It was too bad her current beau Nigel did not dare venture there , despite the opportunities she gave him.
He was just too darn nice , putting up with her  rude and obnoxious behaviour without complaint.

Moment's later Colin and Sharon emerged from the bedroom holding hands like a pair of teenagers.
Her sister's prim hairdo was a tad disheveled and her free hand openly rubbed the seat of her dress as she snuggled closer to her husband.
"I'll have some of that wine Sis!" she chirped as if nothing had happened.

"I ...uhm...thought you said you were the one who did the spanking in this house?" Kate asked as she poured the wine.
"Sometimes the scales need to be rebalanced Kate!" Colin said , fetching his wife a cushion to sit on.
"Thanks Honey!" Sharon winced .

"You know a good spanking wouldn't do you any harm Kate!"
"I know....I know..." Kate mused , her train of thought momentarily distracted by the ringing of her cell phone.
Glancing at it she rolled her eyes and turned it off.
"It's Nigel again! I already told him I'd be home late..."she said , sipping her drink.
Colin scowled at her , "Did it ever occur to you that Nigel might be worried about you? How much have you had to drink tonight anyway Kate?"

Kate rolled her eyes , "Don't you start! I'm fine to drive....HEY!" she complained when Colin scooped her wine from her.
"That's enough for you tonight....and I'm calling Nigel to pick you up...YOU ARE NOT DRIVING!" he scolded her.

A furious Kate rose to confront him , "Don't you dare tell me what to do!" she raged.
Sharon leapt to her feet to join the fray , "Colin's right Kate ....now sit down and I'll make some coffee while we wait for Nigel." she reasoned.
"Like Hell I will!" Kate spat , her jaw gaping when Colin rolled up his sleeves.
"You wouldn't...." she began , her voice dropping.
"Either I do it or Nigel will !" Colin announced , seizing Kate's wrist.

Like her sister , Kate soon found herself flung over her brother-in-law's broad shoulders.
"You call Nigel while I take of her !" he said to Sharon as he carried the kicking and screaming Kate down the hallway.
Despite putting  up quite a fight , Kate soon found herself in the classic position to receive her first spanking ...and what a spanking it was!
Her curvy bottom turned a glowing red , as she apologized and promised to behave.... if only Colin would stop spanking....but he was far from done....

Nigel was surprised to see his feisty girlfriend in such a state when he arrived to drive her home.
She was perched rather uncomfortably on a big cushion , face red , hair ruffled and mascara streaking around her big brown eyes .
"What happened to you Kate? Are you hurt?" Nigel asked with genuine concern.
Colin smiled , "Don't worry Nigel....the only thing that's hurting is her pride....well....and maybe something else!"

Sharon giggled at Nigel's look of disbelief.
"He spanked me Dammit! Something you should have done months ago ...if you were man enough!"Kate ranted.
Colin and Sharon cringed and awaited her boyfriend's reaction.
Nigel looked at them , "I'm so sorry about this....but is there somewhere private I could take Kate for a short while?"

"Second on right...down the hall....and you'll find a nice big slipper by the bed!" Colin advised.
".....and a nice big hairbrush on my dressing table if you prefer!" Sharon added.
The pair laughed as a protesting Kate was dragged down the hall for the second time , "Please no Nigel....I just got a spanking!" she pleaded.
"Well you're getting another one!" Nigel replied.

Sharon put her arm around Colin and planted a big kiss on his lips , "Just think Colin...if you hadn't answered the doorbell we would have missed all this!" she laughed.