The Fruedian slip - A MF Spanking Story (sort of!) 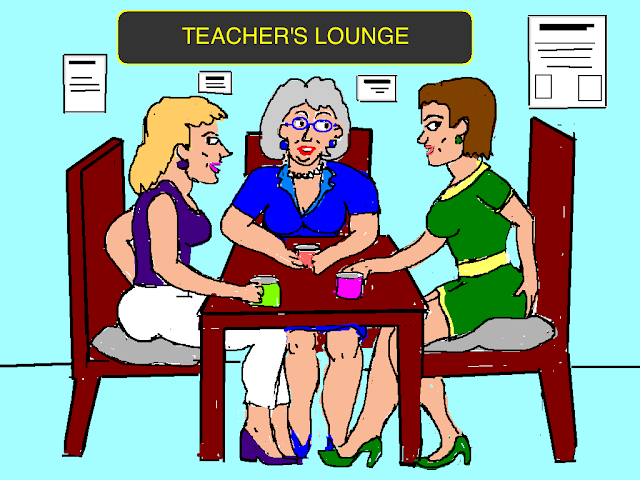 How many times do I have to say I'm sorry Patrick? It was just a slip of the tongue! I honestly didn't mean to say it...it just kind of spilled out ..." Charlotte reasoned with her Fiance.

Patrick looked at her in disbelief,  " It spilled out alright Charlie....you went on about it for a good 5 minutes or more!"

His Fiancee shrugged , "Well that's because Brianna kept asking me questions about it....I could hardly tell her to mind her own business could I ?"
"That's exactly what you should have done Charlie! You looked like you were enjoying it as much as she was..." Patrick replied.
An impish smile played on Charlotte face , " Well I guess I did....after all , it's not every girl that gets to keep her man in line by giving him a good spanking is it? .....and I would remind you that it was your idea in the first place , not mine Sweetie!"

Patrick sighed , "That's true ...but I don't want everyone to know about it do I?"
Charlotte shook her head , "Don't be silly Sweetheart , it's only our best friends Brianna and Sam that know....and I'm sure they won't tell anyone! Anyway , the proverbial cat is out of the bag now , and I have apologized .....repeatedly I might add ....so  stop that silly sulking of yours. While I take my shower , why don't you use the time positively by thinking about how I might make it up to you...I'm sure You'll come up with something...." she said , pouting her full lips.

Before closing the bathroom door , she paused and waved the big wooden bath brush at Patrick , "Remember dear , if that attitude of yours that hasn't disappeared by the time I'm finished , You'll be feeling this on that cute little tushie of yours!"

Meanwhile , Brianna was in a buoyant mood as she and Sam put the dishes away.
"That was quite the revelation wasn't it Sweetie?" she asked.
What revelation?" Sam replied,  pretending not to know what his girlfriend was referring to.
"Hmmm...." Brianna mused,  " I noticed you weren't your usual outspoken self while Charlotte was telling us how she keeps Patrick in line with a good spanking!"
Sam shrugged , feigning disinterest and pretended to concentrate on removing a stubborn stain from  a dish .

His girlfriend was not about to let him off the hook so easily , "Perhaps your uncharacteristic lack of 'opinion' on the subject is because you're afraid that I may use Charlotte's  method on you? It certainly seems to  work very well on Patrick?" she added.

Sam felt his face flush , his head dropping and his feet shifting nervously , in the  hope that ignoring Brianna's comment would be enough to change the subject.

"Do I see big tough Sam Taggart blushing?" Brianna teased , "....Perhaps because he knows he deserves a  darn good spanking , but the thought of having to  go over my knee is just a little bit scary?" she continued relentlessly.

"Let's just close the subject shall we dear , or would you prefer that I give you a dose of this on 'your' cute little keister? " Sam replied , brandishing a wooden spatula.
"You wouldn't dare!" Brianna replied ,  taking a couple of steps back from her burly boyfriend.

Sam was the one enjoying himself now , tapping the spatula against his palm , "Come to think of it , we never did finish dealing with that little 'potty mouth' incident at your parent's last week did we?" he asked.
"Nnn...now that's not fair Sam....I already apologized for that and...EEEEK!" she let out a squeal when Sam grasped her wrist firmly.
"You know my opinion on the matter ....and now you're about to find out!!" He told her.
His girlfriend wriggled , trying to pry herself free from his grip , before succuming to his superior strength and allowing herself be towed effortlessly to the bedroom , "Me and my big mouth!" she sighed to herself.

The next morning , co-workers Charlotte and Brianna greeting each other in the Teacher's lounge in a more subdued fashion than usual.
"Thanks for a great dinner last night Brianna !" Charlotte said.
"I hope everything was ok with you and Patrick afterwards ......he looked pretty upset when you told us about your little 'arrangement' ....and I probably shouldn't have teased him about it..." Brianna replied.

Charlotte reached into her bag ,took out a small cushion and placed it on her chair .Very  carefully , she lowered herself onto it with a grimace .
"OOOOOH!" she gasped , shifting on the seat uncomfortably , "Patrick sure  was mad at me , especially when I enjoyed teased him about it when we got home.....so he decided  I neded a dose of my own medicine!"she explained.

"He didn't!" Brianna gushed , putting a palm to her gaping mouth.
"Oh he did alright ....and he even used that darn bath brush that I love to use on him .....Ouch ! I hope there's not too much sitting on the agenda today!" Charlotte winced.

It was Charlotte's turn to be surprised  when Brianna produced a pillow of her own and carefully eased herself onto it ,  "GAAAAH!" she gasped , "We have a Staff meeting today so I figured I would need this......Sam roasted my butt real good after you guys left!" her friend confessed.

A smile of delight replaced Charlotte's grimace , "He spanked you5? What for?"
Brianna frowned , "Actually , after what you described , I was trying to find a reason to spank him , but ended up talking myself into a spanking ! I was pretty rude and swore at my Mom last week . Sam wasn't too pleased but I thought that was it , but last night he decided it deserved a dose of  his belt on my bare butt! "

The two young schoolteachers continued to chat for The next 5 minutes , sharing details of their respective spankings and how sore their bottoms were , until the School Principal , Janet Bradley entered the room.
"What were you two laughing about ...I could heat you from back in my office!" ths Principal remarked,  pouring some tea before joining the younger women.

All their squirming , grimacing as they sat on their  pillows did not escape the older woman's attention.
Charlotte and Brianna had no idea how much of their conversation the Principal had overheard but , based on her expression ,they assumed it was enough.
"Oh just girl stuff Mrs. Bradley ...." Charlotte offered in response.
"You mean 'naughty' girl stuff? " Janet said , making both of them  blush.

"Oh don't worry ladies....your secret is safe with me. There have been  lots of days when I sat , very gingerly, on those very chairs with a bottom as sore as yours are !" the older women declared without flinching.
"Luckily for you both , I've cancelled this morning's staff meeting so that's one ordeal your poor bottoms will be spared!" she chuckled.
Then , taking one final sip from her teacup , "Enjoy your day ladies!" she chirped at the two stunned Teachers.
Whenn the bell rang ,  Charlotte and Brianna were happy to stand up , pausing for a moment to  briskly rub their rear ends before heading to class.

That evening , Patrick laughed when Charlotte told him about their discussion with the stuffy School Principal,
"It's not funny Patrick! Now my boss knows you spank me like a misbehaving , naughty schoolgirl ." she pouted.
"Can't you see the irony Charlie? You found it so amusing to reveal that you spank me , but it's not so funny when you let the School Principal know that you get spanked !" he cackled.

His Fiancee didn't find it as funny as he did , "Don't let that spanking last night go to your head mister ....that was just me allowing  you to have some payback for my little Fruedian slip ....but , as of now , normal service is hereby resumed!"
"Normal service?" Patrick asked a little nervously.

He noted a wry smile forming on Charlotte's face , "Yes. 'You' are the one who gets spanked Patrick...and 'I'm' the one who does the spanking . That 'is' what it says in the agreement you signed isn't it Sweetie?"
Patrick's smile quickly faded , he had drafted their agreement , so could hardly argue ,  "I guess so...." he conceded.
Charlotte raised a brow , cocking her head to one side , "Pardon me?" she asked firmly.
"Er....uhm...I mean....Yes Ma'am!" her husband corrected.

Across town , Brianna had been lisrening  in to a telephone conversation between Sam and her Mother.
Sam held up a palm to placate his raging girlfriend , "...but Bri.... , it was just Fruedian slip." he explained.
Brianna cut a formidable figure standing confidently with hands on hips , "A Fruedian slip was it? I'd hardly categorize you giving my Mother a full play by play of the spanking you gave me for swearing at her a slip.....I'd say you planned it....and enjoyed it!" she fumed.

"Honest Sweetheart ,I didn't mean to embarrass you...but your Mother was so curious...." Sam reasoned.
His girlfriend's eyes widened , "You do realize that my Mother will never let me forget this....and she'll just love replaying it at every family dinner? ....and did you really have to tell her about Principal Bradley finding  out?" she added.

Sam shrugged,  "But even you thought that was funny?" he replied  , but Brianna was already marching to the  bedroom to retrieve the hairbrush , and tapped it menacingly against her palm.
"From now on I'M the one who'll be doing the spanking and I'm  going to enjoy telling everyone that I blister your behind when you act like a jerk!"
Then , gripping hef burly husband by the ear , she guided him to the bedroom.

Around 30 minutes later , Sam was squirming on his seat at the table studying the document Brianna had pushed in front of him.
"How many times are you going to read it Sam? Do  you agree to sign it or not ?" she demanded.
Her boyfriend continued to be reluctant to put pen to paper , "But it doesn't mention what happens when you er..ah...'misbehave' ? " he asked.

Brianna smiled , "You know as well as I do Sweetheart that I'm a perfectly behaved little Princess so my cute little bottom is exempt from spanking.....you however,  need that attitude adjusted on a regular basis and that's what my haurbrush and  I intend to do! If you thought that spanking was bad , just wait until I get started ! " she scolded.
Sam shifted on his seat , paused .....and signed.

A few weeks later , the two couples got together again, and this time the ladies were quick to set some ground rules regarding conversations  , "Now that it's open that both of you are ....what shall we say.....'under contract' with us ....neither of you should be embarrassed if we discuss our...ahem....'disciplinesessions'....agreed?" Charlotte proposed.
The two men looked at each other and nodded agreement .
"Great !That's settled then. " Brianna chirped and poured some more wine.
"Hey Bri....did you notice Principal Bradley's been doing an awful lot of squirming and wincing during our Staff meetings.....do you think....?" Charlotte giggled.