The Crimson Pirate - Spanking on the High Seas - Part 1 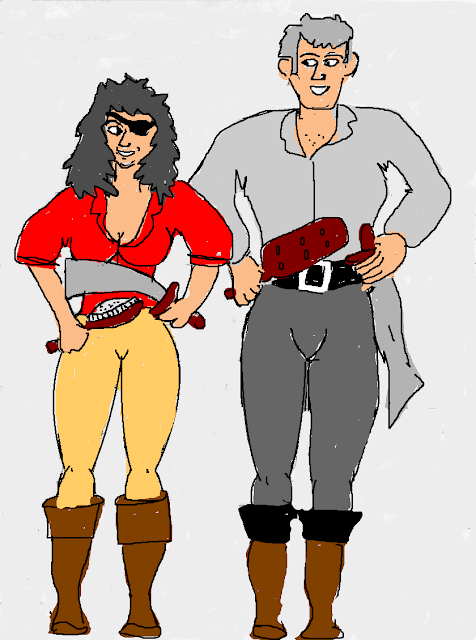 Sinbad the 'surgeon' laid the tools of his trade where Captain jack could see them.
Cackling occasionally , he wiped his nose with the sleeve of his shirt as he worked.

Jack had seen it all before so remained stoic.
He was stripped to the waist and tied to one of the masts making escape unlikely.
Whatever Sinbad had in mind he would have to endure so prepared himself accordingly.
His lips were parched and his entire body glistened with sweat from the pounding Asian sun.

The surgeon waved a rusty, yet sharpened metal device  under Jack's nose.
"Last chance  Captain Jack...tell me where you've hidden the treasure before I torture it out of you.." he spat.

Jack shook his head , "Do your worst surgeon....I'll tell you nothing!"
Sinbad smiled , pleased by his victim's response.
Using a long , boney finger he roughly pried Jack's jaws open and moved  the device closer.

His work was interrupted by a female voice.
"I'd prefer if our guest remained in one piece to preserve his value Sinbad!"
Sinbad nodded , stepping back respectfully while Lady Elizabeth Hardy , known as "Red Lizzie" , took his place.

Lizzie was an athletic , voluptuous woman with long raven black hair and a patch over one eye.
The patch and the scar surrounding it seemed to enhance her attractiveness rather than detract from it.
She took the device from Sinbad , teasingly studying it before putting it down.

"He still won't say nothin' Lizzie!" Sinbad informed her.
Lizzie's single eye  gazed into Jack's .
"Don't waste your time Sinbad. Bring the Captain to my cabin and I'll soon get it out of him !" she declared, flinging her head back confidently.
"Are you sure Lizzie? He's a tough one to crack." Sinbad asked in disappointment.
Lizzie said nothing but glared icily at him making the tough sailor wince visibly.
"For gentlemen like the Captain here , it sometimes requires a 'lady's touch' to obtain results." she assured him calmly. 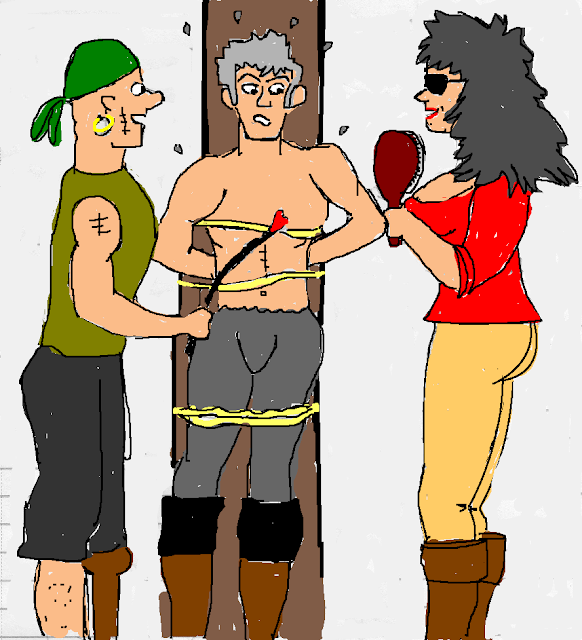 Jack rubbed his wrists when his shackles were removed and Sinbad shoved him inside Lizzie's cabin.
Lizzie entered , waving Sinbad away standing boldly with hands on her shapely hips.
She paced around Jack as she spoke.
"Well Captain Jack? Aren't you going to thank me for saving you from Sinbad's clutches?" she teased.

Jack puffed out his chest defiantly and faced his captor.
"If you think your feminine charms will make me talk I'm afraid you'll be disappointed Madam!"

Red Lizzie let out an exaggerated laugh  then opened the desk drawer to retrieve a large antique hairbrush.
Jack's eyes widened and his jaw dropped , his proud demeanour fading at the mere sight of the implement.

Lizzie walked closer to him , tapping the back of the brush against her palm.
"All of you 'superheroes' have a weakness don't you Captain Jack? For some its rum or gold ...but for you....it's a strong woman who knows how to apply a hairbrush to your backside!" she announced.

Lizzie continued to advance while Jack retreated to the wall.
Placing a chair in the centre of the room , Lizzie sat down , hoisting her tunic to reveal more of her shapely , tanned thighs.

Leaning forward she looked purposefully at a cowering Jack .
"Well Captain Jack? Are you going to down those britches and get over my lap , or do I have to come over there and fetch you?" she warned.

"Please Lizzie.....not that darn brush....pass me a map and I'll show you where the treasure is!" he babbled.
Our brash adventurer had rapidly morphed into a frightened schoolboy.
Lizzie tossed her head back and cackled , " If only your crew could see you now Captain Jack...or in a moment when your bare ass  is over my lap getting spanked !"
A satisfied grin played on her face when Jack obediently lowered his britches.

Inside the cabin , a full 5 minutes of non-stop whacking with Lizzie's hairbrush had broken the Captain's will.
Amazonian Lizzie was proving she could wield a hairbrush with the same venom as her cutlass.
The back of the brush cracked repeatedly against Jack's bare bottom while he squirmed and pleaded shamelessly on her lap.

Lizzie had his arms pinned back behind him , both legs locked by hers , so all Jack could do was wail and plead for mercy - both of which were ignored by Lizzie.
Lizzie paused to wipe beads of sweat from her brow and addressed Jack.
"So Captain Jack...are you ready to tell me what I need to know?"

"Dammit Lizzie....I was ready to tell you before you started blistering my behind with that thing! stop it and let me up woman!" Jack blurted foolishly.
Red Lizzie tightened her grip on the brush.
"I really don't like your tone Captain so I intend to show you that I am the one in charge of this spanking and only I will decide when it ends!"
With that she raised her arm and resumed spanking - HARDER!"

Thirty minutes after a proud and defiant Captain Jack had entered Red Lizzie's cabin , he emerged red-faced , ruffled and subdued , his pride battered as severely as his backside.
He walked stiffly with a constant grimace  , just ahead of a positively glowing Lizzie.

"Get a boat ready .....the captain is ready to take us to the treasure!" she beamed.
Sinbad scratched his head.
"I wish I knew what you did Lizzie?" he asked in awe.
Lizzie grinned and winked her one eye.
"I told you...it's a ladies touch.....and boy did I touch him...didn't I Captain Jack ?" she laughed .
"GAAAAH!" Jack yelped when Lizzie delivered a hearty slap to the seat of his britches.
Jack seethed through gritted teeth , "I'll get you for this Red Lizzie....mark my words..." 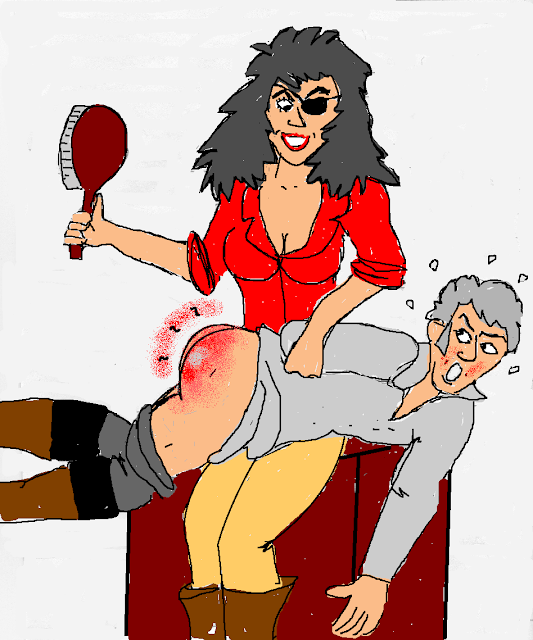 “Be a good boy now step away from the treasure Jack …”Lizzie taunted.

The famous adventurer slowly turned to face his arch enemy Red Lizzie.
“They are not ‘treasure’ or plunder Madam they are valuable artifacts which belong in the London museum.” Jack informed her.
Lizzie’s band of Pirates cackled along with her when she mocked Jack’s upper class accent.

“OOOUARTEEFACTS ARE THEY! Well to us they be gold that’s gonna be melted down and sold with the rest of the bootie from that merchant ship !” they laughed.

A furious Jack took a step forward but stopped when Red Lizzie raised her cutlass .
“What that cute little pirate booty of yours needs is a good dose of my strap!” Jack warned.
Instinctively , Lizzie felt her shapely bottom tingle.

Jack knew her well and that her weakness was her uncontrollable desire for a good hard spanking.
He had exploited that very weakness of hers many times before and Lizzie knew he would try again so was ready for him.

Jack advanced again , “You wouldn’t really use that cutlass on me Lizzie….it’s not your style!” Jack challenged.
Lizzie grinned broadly , “OH NO Jack ?  Then why  don’t you turn around , and drop those fancy britches of yours. I want to see if your backside is still bearing the marks from our last encounter!” she ordered.

Jack blushed , visibly wincing upon recalling the incident in Lizzie's cabin earlier.
Lizzie had applied her hairbrush to his backside unmercifully until he gave up the location of the artifacts , then to add insult to injury , she deviously tricked him into making love with her atop and his already battered backside rubbing on rough , wooden boards which left splinters in his behind  which required him to endure another humiliating session over Lizzie’s knee to remove them.
He would not be sitting comfortably for a while !

Steadfastly Jack refused to down his britches.
With a nod from Lizzie , two of her strongest men held Jack while she did the honours herself.
The Pirates chortled ,teasing Jack when his muscular bare buttocks were exposed.

Lizzie was pleased to see that her lover’s lily white cheeks still bore the marks of her hairbrush ...and  unhealed scratches and scrapes from the boards during their wild lovemaking.
Jack winced when Lizzie gave each of his tender cheeks a hearty slap.
"I see you’re still pretty tender back there Jackie boy !” she teased to the amusement of her crew.

Taking her weapon , she teasingly let the sharp blade tease Jack’s skin.
He flinched and clenched his buttocks.
“I think it’s about time I gave you something more permanent to remember me by Jack.” She announced , and using the razor sharp edge of her sword , expertly carved the letters L-I-Z-Z- I-E across both of his cheeks.

Jack gritted his teeth but remained stoic and silent.
Lizzie used her sleeve to wipe the trickles of blood and took a moment to admire her work.
Standing up , she pulled Jack's face to hers and planted a long , passionate kiss on his lips.
“You’re my property now Jack….until we meet again!” she pouted.
With that , Lizzie’s men picked up the artifacts and placed them in the big wooden chest and departed.

A few hours later Jack was still seething as he lay face down on the bed while Doc Winchester tended to the carving Lizzie made on his backside.
“You’ll be a bit tender for a day or two Jack but those marks should  heal in a few days.” the Doc told him.

“Look's like I’ll be bearing her mark on my behind for a while!” Jack scowled.
“At least she didn’t carve it into a more prominent part of your anatomy Jack like your back , chest or even your face. Down there it will be hidden…..well from most..” Doc consoled.

Jack realized the marks would be difficult to conceal from his Fiancee , Lady Beatrice and he knew how she would react if and when she saw it.
In less than two days he would be home and required to explain the marks to her.

Lady Beatrice, would not be pleased and would undoubtedly subject his poor backside to even more  severe discipline of her own to teach him a lesson.
Not only would he face the wrath of the public , having returned without the artifacts , but  also the wrath of his formidable fiancée !