The Crimson Pirate - Spanking on the High Seas - Part 2 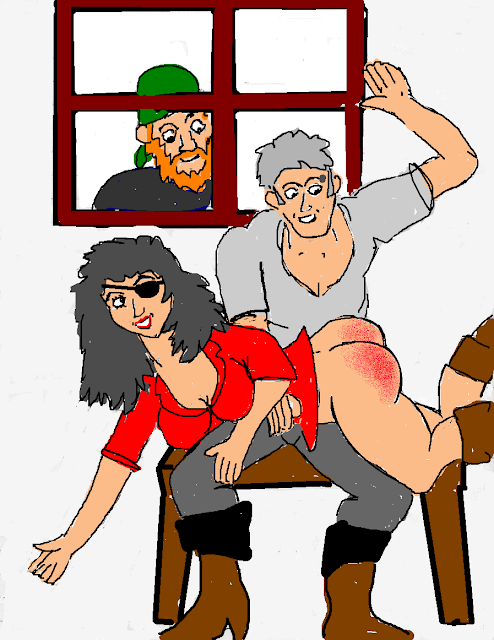 "Curse Lizzie!" Captain Jack spat , his legs flailing in an attempt to free himself from his bindings.
Red Lizzie chuckled.
"I wouldn't want to be you going home without the treasure ....and having to make love to that snooty Lady Beatrice .....and all it took was a good spanking to get you to talk !"she teased.

As Red Lizzie led her band of Pirates triumphantly away , Captain Jack had managed to loosen his bindings enough to put an arm around  Lizzie's tiny waist.
"You can keep the treasure boys ....but this little lady is mine for 5 minutes!" Jack declared , taking Lizzie by the earlobe.
"YEOOW! LEGGO YOU BIG APE!" Lizzie squealed , kicking her legs wildly.
Jack glared into her one eye.
"Unless you want to lose that ear I suggest you tell your men to back off  Madam." he grinned.
"I ain't goin' nowhere with you ....you....you bilge rat! Get him boys !"
Lizzie let out a yelp when Jack smacked her on the seat of her scantily clad rear and tossed her over his shoulder.
Lizzie's men stood confused ..."Just 5 minutes boys...you have my word she won't be harmed....well not ALL of here anyway" he mused to cackles from the crew.

"It's OK boys....leave me with him...I'll be back before you've finished loading the treasure ..." Lizzie assured them.
With that Jack shoved his captive into the cabin , locked the door and turned to Lizzie , rubbing his hands with glee.
"Now it's my turn Lizzie.....you've had this coming for a long , long time girl!'

"Don't you dare Jack Hawkins!" Lizzie warned , seeking cover behind the table to avoid Jack's grasp.
Jack grinned at her and the pair engaged in a game of cat and mouse around the table.

Losing patience Jack took a knife from his boot , fired it in Lizzie's direction impaling its in the wall behind her.
His action distracted Lizzie just enough so that Jack was able to seize both her wrists.
"You could have killed me with that you scoundrel!" Lizzie protested .

Lizzie kicked and struggled when Jack picked her up , her tunic riding high up her hips to reveal her shapely bare bottom in all it's glory.
The sight was like a red rag to a bull and Jack drank it in.
Lizzie struggled unsuccessfully to restore her tunic ...and her dignity as Jack carried her over to the desk.

Sitting down , he bent her over his muscular thigh, taking a moment to drink in the sight of Lizzie's glorious , jiggling twin globes.
"Don't you dare spank me !" Lizzie protested , feeling the cool breeze on her nether regions.
"It's time you had a taste of you own medicine Lady Elizabeth!" he declared heartily.

'WHAP!'WHAPP!'WHOP!'WHOP!'WHAPP!'
"OOOW!" THAT STINGS!" YEOOW!"
Jack snapped the brush rythmically against Lizzie's jiggling bare cheeks .
He loved the way they clenched ,jiggled and swayed deductively with every spank.
He spanked her thoroughly , one cheek then the other , alternating rapid flurries with single hard spanks until those cheeks were a bright glowing crimson and Lizzie was sobbing earnestly.

"Now I know why they call you Red Lizzie!" Jack chortled.
Only Lizzie knew how close he was to the truth.
Years ago she had ran away from her strict Victorian home and came under the wing of the famous pirate , 'Gentleman John'.
The ruthless , bloodthirsty pirate took a liking to Lizzie , giving her a job as a cabin 'boy' and treating her like his own daughter.
He loved her feisty , wild nature and taught her the ways of a pirate.

However , Lizzie soon found out the Gentleman John was even more of a disciplinarian that her own father ,and she found herself over his lap having her bottom warmed on a regular basis.
Gentleman John made no secret of the fact he spanked young Elizabeth and often delivered her bare bottomed spankings in front of his amused and ogling pirate crew.

It was John who gave her the name Red Lizzie given her backside was red most of the time!
Since John's passing , Lizzie longed for someone to take his place and the spanking she was receiving from Jack stirred those feelings of desire , previously hidden for years.

Lizzie raised her bottom to meet the spanks Jack was delivering.
"Is that the best you can do?" she teased him defiantly.
Jack gladly assured her it was not and picked up the pace and intensity of the spanking.
Red Lizzie bucked on his lap and Jack really laid the brush on her as hard as he could.

When he finally stopped they were both out of breath and looking at each other longingly.
"Let that be a lesson to you not to cross Captain Jack!" he panted.
Jack felt Lizzie's hand slip down his britches and fondle his growing erection.

Her grip tightened and Jack dropped his drawers to release his member to her.
With a shove she spun herself off his lap , pushing Jack backwards onto his back and the roughness of the cabin floor.
Jack cried out when his tender rear quarters  , still suffering from the recent spanking with Lizzie's brush and cutlass scuffed against the wood below him.
The splintered wood piercing and chaffing his already tender skin.
Lizzie mounted him , guiding his shaft deep inside her and began riding Jack hard!

For Jack it was a strange combination of ecstatic pleasure and pain as Lizzie's gyrations drove his sore backside against the sandpaper roughness of the  surface below- to Lizzie's delight !
The wily Lizzie knew exactly what she was doing.
She had regained the upper hand again , and was subjecting Jack's damaged backside to even more punishment,  but at the same time , he was in too much pleasure to have her stop...... 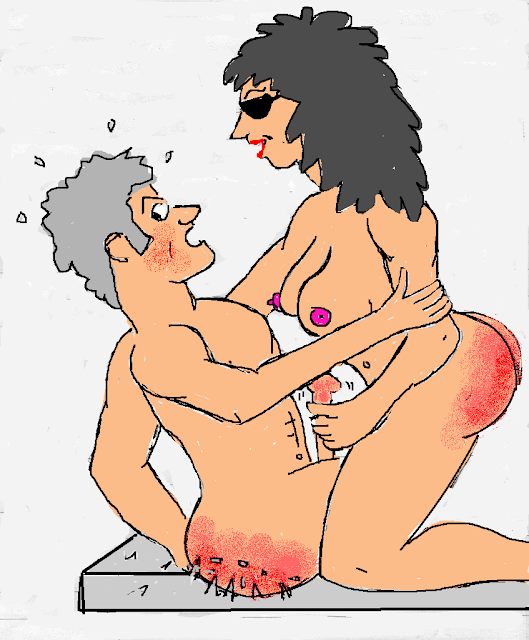 Her one eye glared at him wildly as she bounced on top of him.
"How does your poor backside feel Jack? Sore is it? Should I stop?" she teased.
"AARGH!" WHY YOU LITTLE BITCH!" NO DON'T STOP!" Jack wailed.
Lizzie obliged , continuing to  ride him then  abruptly rising to release his throbbing shaft.

Squeezing his testicles with one hand she wrapped the other around his quivering member.
"AW NOO! PLEASE NO LIZZIE ! STOP!" Jack moaned , knowing she was now in her complete control.
With glee Lizzie teased him ,  caressing  and squeezing his erection until he was in a full-blooded  frenzy.
She cackled loudly when he explosively spilled his load .

"That was quite the spanking Jack....I needed that ....and the sex wasn't bad either!" Lizzie purred , proudly looking back at her nice red bottom.
A frustrated Jack  moaned and turned to inspect the collateral damage inflicted to his own rear quarters .
Placing a pillow on her chair , Lizzie let out a seductive "OOOOOE!" as she eased her bottom carefully onto it .
"Over you go Captain. I'll do my best to get most of those nasty splinters out of your stern" she chuckled , patting her lap.

Jack wondered what had gone wrong  with his plan.
Here was a woman he had just spanked as hard as he could , now sitting , albeit with the comfort of a pillow , while he knew he would not even be able to think about sitting until they reached port.
Somehow Red Lizzie had turned the tables on him again.

Lizzie patted her lap again , " Don't be shy now Jack ....it won't be the first time you've been over my lap....and certainly not the last!"
With a heavy sigh of resignation , Jack draped himself over Lizzie's inviting lap for the  lengthy and painful splinter extraction procedure. 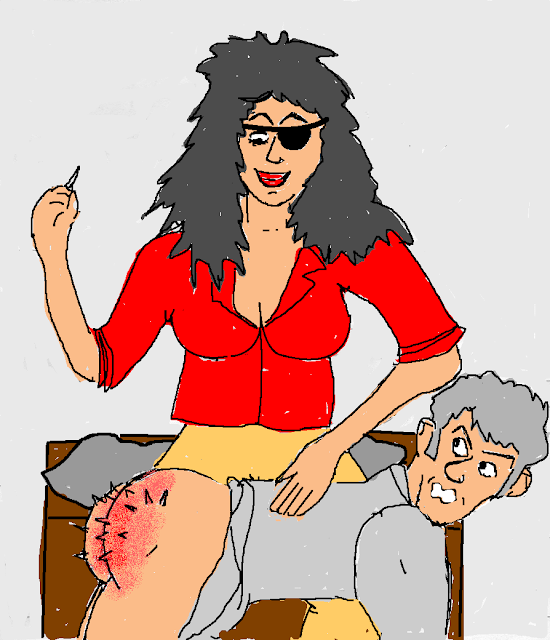 "OW! TAKE IT EASY LIZZIE !" Jack yelped when the final splinter was removed.
Lizzie gave Jack's rump a playful cackle , "Well at least I've given you something to remember me by Jackie boy! That was quite a spanking I gave you!" she cackled.

"Don't you dare mention this Lizzie! " Jack warned her .
With great delight , Lizzie carefully ran her fingers over her name  carved deeply into the flesh of Jack's backside! "I wonder what your lovely Lady Beatrice will have to say when she sees this !" she cackled.

Lizzie tossed Jack off her lap and wiggled into her pants , "I have treasure to load Captain ....be sure to give Lady Beatrice my regards!" she cackled.