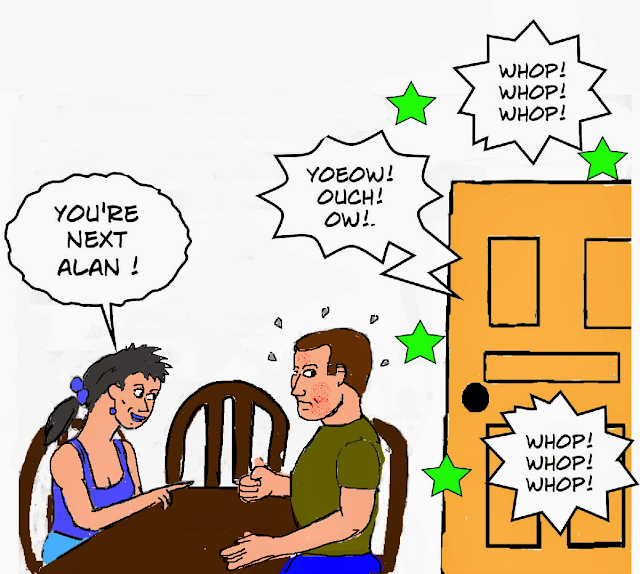 "But Kate.....Alan and Jess are in the kitchen...they'll hear! I'm sorry....I should have listened to you but I...." Eric pleaded as his wife reached into her dresser and scooped out the big paddle.
Kate examined the paddle before turning to face her husband , "......but you didn't think I would paddle you with our friends still here? Well it appears you were wrong my dear! You behaved like a fool , disobeyed me and then defied me in front of them so they can listen to you getting your bare behind paddled. Now drop those pants and bend over the  chair!" she scolded.

Eric let out an exaggerated sigh , slumped his shoulders and began undoing his pants as his wife swung the paddle through the air making an ominous hissing sound as air escaped through the holes in it.
His pants at his knees , Eric draped himself over the big chair in a familiar position and waited for his wife to begin.
Out of her husband's view , Kate eyed his muscular backside with an impish grin before unceremoniously whisking his boxers down to join his pants .

She gave his lily white bottom a playful caress and slap which made him jolt before taking up her position to his left.
"Get that bottom right out!" she instructed , widening her stance and leaning forward slightly like a tennis player about to receive a serve.

In the kitchen , Alan and Jess sat nursing their coffees and listening for any noises from their hosts down the long hallway.
"Eric went a bit far this time didn't he.....I've never seen Kate that mad at him before. At least she's not giving him a talking to in front of us." Alan said.
His wife grinned and took a sip out of her cup , "I have a feeling he may be getting more than just a talking too Honey!"she replied.
Alan's face blanched , "You don't mean she's going to......no she wouldn't...." he reasoned.
'THWAAAACKKKK!'
"OW!"
"I do believe she is!" Jess cackled.
'THWAAACK!' "OOOW!"
'WHAACK!' "OUCH!"
'WHAAAPPP!' "YEOOW!"
Her husband visibly cringed as another three thunderous claps landed to howls from his fellow husband.

"Sounds like he's getting a grade A paddling like the one I gave you last weekend sweetie!" Jess teased.
Her husband blushed and his backside tingled at his wife's comment.
"For Eric's sake , I hope not , I've still got marks on my behind from that one!" he recalled with a forced smile.
Jess giggled , "I did enjoy watching you squirm on your seat all week dear....I do hope nobody else noticed? It wouldn't do if the ladies in your office knew I spanked your bare bottom when your bad !" she teased.

"Holy Cow! She is really swinging that thing!" Alan remarked.
"That's my gal!"his wife applauded.
There was a pause as Kate's voice could be heard scolding her husband , interspersed with the occasional muted response and the two witnesses strained their ears to listen.

Jess clapped her hands together in glee , "Sounds like our bad boy is getting a good old fashioned spanking now!" she chirped.
The crisp , rapid smacks continued for another minute or so before silence returned.
Both Jess and Alan were rendered momentarily silent until they heard the bedroom door open and the sound of Kate's heels clicking on the wood floor.

Alan noticed that Kate's appearance had changed slightly upon her return,
Her face was flushed slightly and her long , blonde mane was tied back in a pony tail .
A couple of extra buttons on her silk blouse were undone providing a glimpse of cleavage and the right sleeve was rolled up to the wrist.
A satisfied smile played on her face and when she spoke , she was slightly out of breath , "Sorry about that! Eric will join us shortly....he just needs a minute ....I'll make us some more coffee!" she said nonchalantly and busied herself in the kitchen.

Moments later the sound of the door creaking slowly open , followed by measured and stuttered steps could be heard.
A red-faced and slightly dishevelled Eric appeared , walking stiffly and wearing a forced smile.
"Er....sorry for being a bit of a pain earlier guys....sometimes I get a bit carried away and Kate needs to clip me back in line!" he blurted with some difficulty.

"Well judging from what we heard from here she certainly did a good job of that Eric!" Alan said in an attempt to lighten the mood.
Both ladies put a hand to their mouths smothering giggles watching Eric painfully  lower himself back onto his chair.

Alan tried to show compassion for his fellow hubby but had to grin with the ladies.
That is until Jess leaned closer to him , "What are you grinning about mister ?" she asked before turning to Kate enquired, "Is everything ready ?"
Her friend nodded , "Absolutely! The chair is still out and the paddle is hanging on the door.My hairbrush is on the dresser if you need it!"
Alan's jaw dropped and his head swiveled as the two women talked.
"I believe I will be needing it!" Jess announced standing up , "Let's go Alan!"
Her husband threw up his hands in frustration , "...but what did I do sweetie?" he asked.
Jess paused to respond , "Nothing yet...but let's call this a pre-emptive strike shall we?Just to make sure you do behave."

Alan was too busy squirming around in a vain search for comfort to offer any support for his friend ,and Kate sat back in amusement as the other couple made their way down the long hall to the bedroom.
Jess glanced over her shoulder and winked at her friend before she entered the bedroom to join her husband.
She was going to enjoy this as much as Kate did!