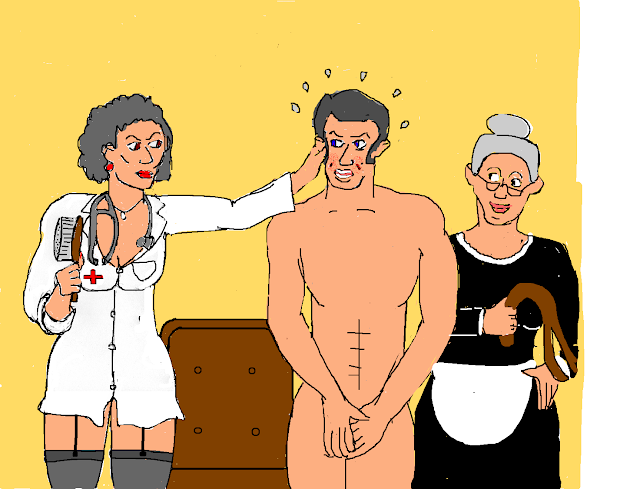 In this sequel to  Doctor's Orders , our spoilt playboy Lord Reginald Chumley is still trying to romance the stunning Doctor Florence Davenport......

Doctor Florence Davenport's assistant entered her office carrying a huge bouquet of roses.
"More flowers from Lord Chumley Doctor! Where shall I put them?" she asked.
The pretty Doctor shook her head , "He certainly is persistent!Send them off to the retirement home with the others Sally please."

"He's called four times already today asking to speak with you Doctor.What should I do?" Sally said.
Doctor Davenport sighed and looked up from her paperwork , "I see I must do something about our Lord Chumley...make an appointment for him at at 5pm today Sally please"
Sally looked puzzled , "But your last appointment is at 4pm Doctor...."
Florence smiled at her , "It's OK Sally , you can leave at the regular time.I can handle Lord Chumley on my own."

Back at the Manor , Lord Reginald Chumley burst with excitement when his Housekeeper Mona brought him the good news about his 5pm appointment with Doctor Davenport.
"I knew she couldn't resist much longer...no woman can!" he boasted.
Mona shook her head , "I wouldn't be so sure about that Reginald.Doctor Davenport is not like those women who swoon over you.....as you well know!" she smirked.

Reginald's pride momentarily sagged when he recalled how the good Doctor had humiliated him so much when she had paid him a house call a month ago.
"This time will be different Mona!" Reginald declared confidently.Mona wagged a finger at him , "OK but remember ....no drinking and I want you home and in bed by 10!"Mona had been Reginald's Nanny since he was a baby and it was part of her job to keep the rambunctious young Lord out of trouble.

"Aw Mona! Can't we forget about that just for this evening ?" he pleaded in his best 'good boy' voice.
Mona was having none of it, "Absolutely not Reginald! A punishment is a punishment and your curfew is not over until this weekend.You know my rules .....and if you defy me you'll be having a rather unpleasant meeting with Betty Blister!"she warned.
Reginald gulped , instinctively rubbing the seat of his expensive silk trousers.

Betty Blister was the pet name for the big hardwood hairbrush Mona spanked his bare bottom with when he misbehaved.
It had been almost a week since his last session with Mona had him over her lap for a 'discussion' with Betty Blister ...and added a curfew after Reginald had tried to sneak a young lady back to his room after another wild party.
He had no appetite for a repeat of that!

The smartly dressed Reginald sat in Doctor Davenport's office for over an hour , clutching the flowers he had brought her , as patients trundled in and out of her office.
Tapping his foot , Reginald  looked nervously at the wall clock in Doctor Davenport's  waiting room .
It was 5.30pm , and the last patient and the Doctor's assistant had left 45 minutes ago.He thought about just knocking on her surgery door but he did not wish to look too anxious .

The clock showed 6pm when the surgery door finally opened.
"Ah Lord Chumley...follow me please." she told him curtly.
Giddy with excitement Reginald held out the flowers.
Florence looked at them , "More flowers! What a surprise." she said sarcastically , taking the big bouquet and dramatically dropping it in the garbage can.
Flinging her head back confidently , she strode into her surgery with Reginald following close behind.

Once inside , Reginald stood while Doctor Davenport settled into the big chair , crossing her long legs seductively giving him a glimpse of stocking top and milky white thigh.
"So Lord Chumley...what is so important that you feel you must call my office  5 times every day? Have you had a recurrence of your mysterious 'tropical' disease? Because if you have , I would be glad to administer another treatment....but I recall you did not find that  very pleasant did you?"she teased.
Reginald smiled nervously and shook his head , "Oh no....that has all cleared up now.Actually my calls were personal not professional....I was ....er...uhm ....hoping I could take you to dinner to make up for all that trouble I caused you." he stammered.

There was an uncomfortable pause before the good Doctor responded.
He was encouraged when a smile appeared on her pretty lips.
"Yes you were quite a naughty boy Lord Chumley ....and now you know very well how I deal with naughty boys like you. Pestering my assistant the way you have lately was very naughty too!"
Reginald nodded , "Yes it was...and I do apologize but I...." he began but he stopped when the Doctor sprang to her feet and straightened the hem of her white gown."Well Lord Chumley , you came here for a medical appointment so we had best get on with it!" she declared.

Reginald looked shocked at the change in the conversation.Florence looked sternly at him , "Well don't stand there dawdling ....take your clothes off...all of them! I'll return momentarily." she said before leaving the room.
Reginald removed his clothes and stood shivering in the cool room for a full 20 minutes before the door re-opened.

When the Doctor entered his jaw dropped.Florence had removed her tight skirt and wore only her  short white lab coat.
Reginald could see her breasts straining against the undone buttons.The coat only came to the tops of her thighs and her black stocking tops and bare thighs were fully exposed.He could feel his erection growing at the mere sight of her.

It was only then that he noticed a familiar object in her hand...Betty Blister!
Holding the door open , Florence smiled broadly when Mona stepped into the room."Mona! What the..." Reginald exclaimed covering his erection with both hands and stepping back."Hello Reginald." the petite older woman smiled back.Reginald gasped when from behind her back , Mona produced a very formidable leather strap!
Doctor Davenport was doing her best not to laugh and looked at her surprised patient earnestly."I invited Mona to help me with your 'treatment' your Lordship , and she readily agreed."

Reginald's jaw was open so wide he could not speak.
The Doctor walked behind him and he winced when her soft palm caressed his round cheeks."I see you still have the marks from your last session with Betty Blister your Lordship.Nice job Mona. But I think think the marks both of us are going to leave will last a lot longer !" she warned.

Mona giggled and snapped the big leather strap giving Reginald a jolt , "I'm afraid this strap is going to be very nasty Reginald. Doctor Davenport prescribed it just for you!" Mona said.Doctor Davenport waved her index finger in a circle "Assume the position over the bench Reginald !" she ordered.

Reginald turned and bent over leaving his bare rear end at the disposal of the two ladies.
Doctor Davenport opened the cabinet and retrieved the biggest rectal thermometer Reginald had ever seen.His eyes widened.

She twirled it in her fingers and turned to Mona , "First I'm going to take our naughty boy's temperature Mona.Then you and I are going to make sure the temperature of his naughty bottom rises to 400 degrees!"
Striding behind him she produced a gasp from Reginald when she inserted the object into his rear.He let out a girlish squeal when she roughly moved it around and yanked it out before giving his ass a hefty smack!"Why don't you start him off  with the leather Mona....and then you can leave Lord Chumley and I alone  with Betty Blister .......and I can give him the special treatment!"