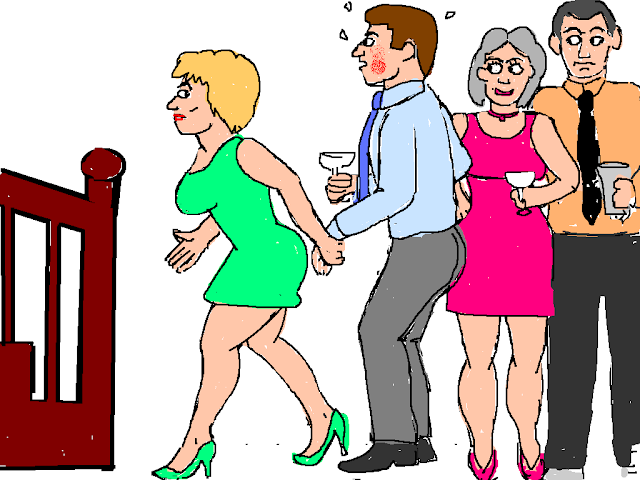 "May I speak with you privately Carl?"Francesca asked her husband politely bit with a hint of seriousness in her tone.
The couple he was chatting with  looked at each other in surprise .
Carl's embarrassment was obvious , his face flushed and his jaw dropped , as he  realized what his wife may have in mind.

"I'll be there in a minute honey I'm just..."he began , trying to save face, but his wife  was having none of it.
"I mean NOW Carl !" she interrupted,  casting him an icy glare .
To emphasize her point her tone was loud enough to produce a brief but uneasy silence from their guests .

Francesca pointed to the stairs with a dramatically outstretched arm.
With all eyes on him , Carl turned hesitantly , his eyes avoiding the curious guests , and reluctantly  followed his impatient wife .

Francesca took a firm grip on Carl's wrist to hurry him along and he obediently followed her lead.
As they reached the stairs  , she turned to address their guests "Please excuse us folks...this won't take long.Help yourselves to more coffee and dessert."

As Francesca ushered her reluctant husband upstairs ,the guests smirked and speculated about poor Carl's fate.
"Carl's in trouble again....but this time Francesca isn't going to wait until we leave to deal with him!" one of the ladies chuckled.
"Well she did warn him!" another one added with a giggle.

Upstairs in the bedroom , Francesca was wasting no time in remonstrating her naughty husband.
Carl was unable to insert a single word in his defense as Francesca lectured him with a wagging finger and hand on hip.

Then , having exhausted her verbal assault , leaving her husband’s ears burning , she opened the dresser draw and withdrew a long thin cane.
"I will do my part in reducing the noise by using my cane.....but we will have to do something to keep you quiet Carl." she mused , a confident smirk playing on her pretty face.

Carl just shrugged his shoulders in subdued and silent acceptance .
To his surprise , Francesca hoisted her dress?  wiggled her hips and stepped out of her black lace panties.
"Open wide dear!"she ordered trying to disguise a growing grin.
Carl's jaw was already agape but he complied with her request, opening his mouth and allowing his wife to stuff her expensive undies inside !
Then Francesca returned her attention to the cane , swishing it menacingly through the air.
"Hold out your hand!" she ordered curtly.

Carl looked a bit surprised that the target for his wife's cane was not his posterior but tentatively  held out his hand.
He let out a muffled grunt when Francesca brought the cane down smartly on his palm.
He could hardly believe how much it hurt , immediately withdrawing his stinging hand and hugging it under his armpit.

"Other hand!" his wife barked.
Carl winced and removed his stinging hand from its comfort and held out his other hand.
This time he tried to brace for the pain to come but it helped little.
His wife brought the cane down on his other palm with equal venom.

Carl gasped and gurgled into his gag , shook his hand furiously before placing both palms under his armpits in search of relief.

Francesca took the came in both hands and flexed it in a bow shape.
"Bend over and touch your toes! We’re not finished yet!" she barked.
She took  a moment to enjoy the sight of her husband frantically shaking both hands in a vain attempt to cool the sting she had administered..

Her look of impatience signaled Carl to quickly assume the position she had ordered.
He could feel the seat of his slacks tighten against his backside when he touched his toes.

Francesca rapidly whipped the cane across her target for a vigorous six of the best which had her husband grunting and struggling to stay in position.
Carl rose up not knowing which part of his anatomy hurt the most.

He decided to use his sore palms to grasp and rub his stinging backside and hopped from foot to foot.
Francesca restored the cane to the drawer and put a finger under her husband's chin .

"Open!"she ordered and Carl's mouth opened so she could retrieve her panties.
"Anything to say for yourself Carl?" she teased , tossing the garment into the laundry basket.
“I’m sorry Ma’am. I promise to behave.” came the reply .

Francesca was quite pleased with herself.
It took her only a few brief  minutes to administer a sharp and effective lesson to her errant husband.
But she was not finished yet.
Hoisting her dress again , she turned around , wiggling her shapely globes teasingly at her husband.
"On your knees and kiss both cheeks!"she demanded.

It was a delicious sight so Carl did not hesitate to drop to his knees and plant a wet kiss on each if his wife's voluptuous cheeks.
"Now get downstairs and behave yourself....we’ll deal with your behavior properly later!” she scolded.

The entire interlude had taken only a few minutes , more than enough time for Carl to be sufficiently chastened and contrite.
When the couple returned to their guests ,Francesca confidently acted as if they had never left , while Carl was noticeably uneasy and embarrassed.

Judging be the smirks and grins on the faces of their guests , especially the ladies,they had a fair indication of what may have transpired upstairs as their ears strained to hear while sipping their drinks.

Despite his embarrassment  Carl felt oddly excited about being 'outed' and disciplined by his wife in such a semi-public manner..
His bottom and both palms  stung from Francesca'  cane and he strained to hide his discomfort from their guests.

His dilemma was whether he should follow Francesca's lead , and act as if nothing had happened , or to be open about his chastisement.
He ended up choosing the former .

Nonetheless ,his wife's triumphant return, generated admiring glances along with some titters and giggles from the ladies in the room.
Carl blushed and looked sheepish when he made eye contact with Francesca ' s sister Maria who was now chatting with her sister.

Carl noticed Maria's husband Tom was as red-faced as he was.
The two men exchanged glances and , for a moment , there was a brotherly affinity between them.
All the ladies congregated in the living room now , chatting incessantly while the men retreated to the sanctity of the kitchen.
Amongst the men , there was not a mention of Carl's trip upstairs with his wife , their stubborn , masculine bonding prevailing.

However , it was the opposite with the ladies,  and Carl watched them whisper  ,gasp , giggle and point in his direction , as if sharing some sort of secret.
His humiliation had not remained a secret for long apparently!

Meanwhile Carl and Tom avoided the subject , bantering about sports , rock bands and their preferences in scotch , but both were distracted by the image of the two sisters engaged in a deep conversation in the other room.

Eventually , Maria rose ,made eye contact with her husband , and beckoned him to her with a curled finger.
Carl continued to chat with the other guys but with a keen eye on the nearby conversation between Tom and Maria.

"I thought we had agreed I would drive here and you would drive home Tom?" Maria asked him sternly.
Her husband responded with a shrug of his shoulders , a grunt and a "HUH" which his wife took as agreement.
"Well that means you need to be in condition to drive Tom....how many drinks have you had exactly?"she challenged , standing back with arms folded awaiting an answer she clearly already knew.

Carl could not hear Tom's mumbled reply , but it did not please his wife one bit.
Maria shook her head and pointed to the stairs, "We need to continue this discussion in private . "she informed him.

Tom's eyes widened , "Can't we wait until we get home sweetie?"
His wife glared at him angrily , “Oh we'll be doing that alright and , believe me ,  you’re going to be one sorry boy ....but for now I need to make a point. Francesca has allowed us to use her bedroom so get your butt upstairs now mister!”
There was a brief pause before Tom turned and made his way to the stairs .
Carl's jaw dropped while the two sisters exchanged playful winks before Maria guided her husband upstairs.

Except for Carl and Francesca , nobody even noticed  the couple had left, and it was a good 5 minutes before his in-laws returned .
By the look on Tom's face ,Carl concluded that he had endured a fate similar to his own.
"Maria and Tom are going to stay over Carl."Francesca informed him.
"Unfortunately Tom forgot about his responsibility to drive us home and over indulged with the drinks." Maria added.

Carl shuddered when he saw the wry smile on his wife's face and that confident hands on hips stance.
"It will also give us the opportunity to take care of you two naughty boys properly!” Francesca said.
“That little correction you both got was just a teaser .....so get ready for the FULL treatment boys !"Maria added with a giggle.
Posted by Glenmore at 3:04 PM