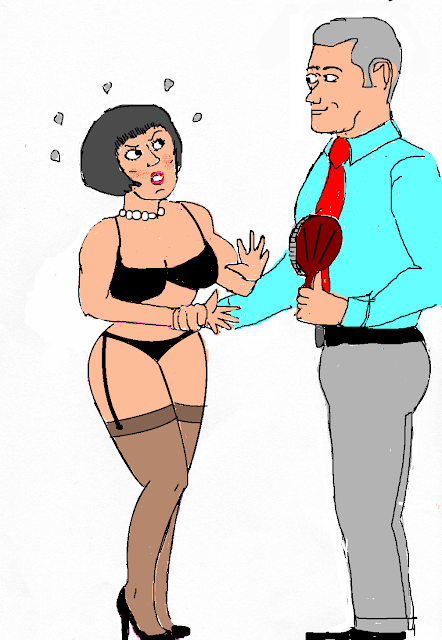 "More tea Nigel?" Tania's Mother asked as her daughter's new boyfriend fidgeted nervously and looked at his watch again.
"No thanks Mrs. Kowatski ...could I ask you to remind Tania that our reservation was at 8.00 ?It's already 10 after. I'll have to call the Restaurant and see if they can change it to later....."the young man replied.

Mrs. Kowatshi sighed loudly , "I will , but if you ask me you're letting that girl get away with murder. She does this to you all the time. I don't know why you put up with it..."
Standing at the bottom of the stairs she yelled at her daughter , "Tania ! It's 10 after 8! What are you doing up there . Nigel has been waiting for almost an hour!" she bellowed.

Upstairs , Tania sat at her dressing table in her underwear , carefully coiffing her hair , "Tell him he will just have to wait ......I'm not ready yet!" she replied impatiently.

The older woman looked at Nigel and shrugged , " Sorry Nigel....you heard her." she said apologetically.
Nigel shook his head in disbelief , " The restaurant will hold our reservation but we will need to leave in 10 minutes...." he explained.
"Unless you do something to speed her up you certainly won't be leaving in 10 minutes Nigel!"

Nigel pondered his options for a moment.
"Do you think it would help if I went up there and talked to her Mrs. Kowatski?"he asked uncertainly.

Tania's mother looked at him angrily with hand's on hips , " Of course you need to go up there young man....but don't waste your time talking to her !" she raged.

Nigel scratched his head , " Don't talk to her? But how can I get her to hurry then ?" he asked.
The older lady's eyes widened , "Do I have to draw a picture Nigel ?On her dressing table you will see a nice big hairbrush. You need to Put her over your knee and give her a good old fashioned spanking with it! Believe me , it's the only language that girl understands."

It took a moment for the motherly advice to sink in but it soon began to make sense.
Tania had been behaving like a brat since they started dating , keeping them late , being rude and sassy and generally being very selfish.
It was almost as if she was challenging him to give her a spanking!
"Which room is Tania's Mrs. Kowatski? "Nigel asked , striding past her and up the stairs.
"Second on the right!" came the delighted response.

"Nigel! How dare you burst in here like that! Can't you see I'm dressing?" an outraged Tania fumed , trying to cover herself.
Her boyfriend took a moment to drink in the sight of his voluptuous girlfriend wearing only a black lace bra and panties , heels and stockings.
She looked amazing but he was in no mood to talk.

Scooping up the hairbrush , he took a firm hold of his girlfriend's wrist and led her over to the bed.
"Let me go! Stop this at once Nigel !" Tania protested loudly.

At the foot of the stairs , Mrs. Kowatski smiled broadly and listened.
Her husband Herman appeared from the study and looked at his wife.
"What's going on up there? Shouldn't they have left ages ago?" he asked.
"Oh I expect they'll be leaving soon dear!" his wife replied.

Herman smiled , "It seems our little girl has finally met a man who knows how to handle her!"
"He reminds me a lot of you when you were his age !" his wife replied impishly.
"......and Tania is very much like her Mother.....I hope he spanks her as soundly as I spanked you my lovely!" Herman remarked.

Upstairs , Tania flailed and kicked while a determined Nigel applied the brush to her bare backside.
Her little panties were banded around her knees and Nigel loved the way her round cheeks jiggled and wobbled as he spanked them.
He did not stop until that bottom was a vivid red and he detected sincere contrition in Tania's voice.

Nigel did not know what to expect next when he spilled Tania off his lap.
He fully expected his humiliated and outraged girlfriend to order him to leave but was surprised when she melted into his arms.
"I really am sorry Nigel darling , I'll never keep you waiting again...." she purred after a long lingering kiss.
Nigel could feel a stirring in his loins which did not escape his girlfriend's attention.

Tania took a firm hold on the growing bulge in his pants , but Nigel held her back,'
"Not now sweetheart....your parents are downstairs. Now hurry up and get dressed or I'll be back up here to give you another dose of the hairbrush!" he warned.
"Yes Sir!" Tania replied curtly ? Giving her bottom a cute rub.

A triumphant Nigel was greeted enthusiastically by Mr and Mrs Kowatski  and sure enough , within 5 minutes Tania was ready to leave.
"I hope they have nice soft chairs at the restaurant Nigel!" Tania grinned , giving the seat of her skirt another good rub.
"Sitting on a sore bottom does a girl the world of good dear. Believe me ....I know!" her Mother said , rubbing her own ample derriere for effect.
Herman chuckled and winked at his wife.