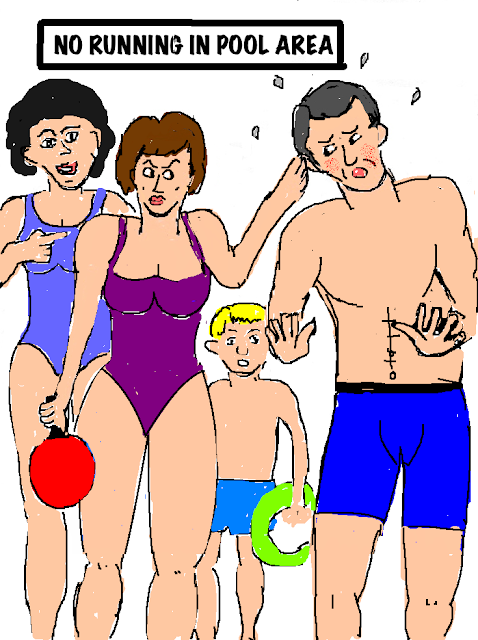 "Stop running around the pool Jimmy! Don't you see the sign?" Jenna scolded her nephew , pointing to the big sign on the wall.
Jimmy pointed to Jenna's fiancee Grant , " but Aunt Jenna .....Grant was running and chasing me ....and he and he told me it was ok to run!"

Jenna raised a brow , "Is that so. Well Grant is a big boy and should know better than that. Running around a slippery pool is very dangerous so please don't do it any more Jimmy. I'll have a word with Grant about it right now....."

Jenna's sister Connie spoke to her son , "Best listen to your Auntie Jenna honey.....this is her pool , her rules and she's the boss around here!"
Jimmy cocked his head , "But Dad told me that men are the bosses of the house Mom!"he exclaimed innocently.
His comment brought derisive laughter from the two sisters.
"Really?Is that so? Well I'll just have to set your Dad straight on that dear." Connie told him.

Meanwhile , Grant sat innocently on the side of the pool , his feet dangling in the water but he immediately tensed when he saw Jenna marching purposefully towards him.
He knew he was in deep trouble when she stopped in front of him in that familiar hands on hips pose.

"Jimmy tells me you were running around the pool and you told him it was ok for him to do it too. Is that true Grant?"
Grant hated it when his school teacher fiancee spoke to him like one of her students .
It made him feel like a naughty 8 year old like Jimmy.

"Er....uhm...sort of....well I guess I did.....but we were just playing sweetie...." Grant babbled , sounding even more irresponsible.
Jenna pointed at the sign , "Don't you remember why I had you put that sign up there Grant ?' she scolded , her voice rising.
"How would you feel if Jimmy had cracked his head on the edge of the pool and was injured - or worse?" she added.
Grant's face was bright red now as he saw Connie and Jimmy looking on earnestly as Jenna took him to task.
"Pretty bad.....I guess...." he mumbled.

Jenna shook her head in disgust then stomped over to the nearby container which stored all the pool toys.
Grant's eyes widened and his jaw dropped when Jenna produced a red ping pong paddle.
Then , taking a firm hold of his ear she pulled him to his feet.
"OW! Stop Jenna.....I'm sorry..." he wailed in protest as Jenna steered him towards the pool shed.
"Come with me mister.....you're going to get the paddling of your life !" Jenna informed him.

Connie laughed heartily and applauded , "That's my little Sis!" she hollered.
"Is Grant in trouble Mom?" Jimmy asked.
"He sure is honey.....and he's going to get it good.I told you Aunt Jenna was the boss!"

The shed door closed and Connie and Jimmy returned their attention to the pool while the sound of a lengthy scolding interspersed with mumbled apologies echoed from within the shed.
There was a brief moment of silence before , 'THWAAACK!' "YEOOW!" .
The distinctive sound of the paddle connecting with a bare , wet backside was crisp and loud even through the closed doors.

The whacks and howls continued for quite some time .
Connie tried to count the whacks , but near the end they were coming so fast she had trouble keeping up , but they certainly exceeded 100.
Meanwhile little Jimmy stood in shocked but amused silence throughout it all.

Inside the shed , a satisfied Jenna chuckled at her fiancee's antics , hopping up and down , frantically rubbing his stinging red backside.
When he finally stopped , Jenna pointed his face to hers.
"Lesson learned?" she asked .
"Yes Ma'am." came the prompt reply.

Grant reached to restore his swim suit but was stopped by Jenna.
"Keep those down for now. You're going out there for 10 minutes of corner time so Jimmy can see what happens to boys who don't follow the rules." she informed him.

"But Jenna....your sister....and Jimmy....they'll see....OUCH!" Grant's protest was abruptly ended with a stinging smack to his tender bottom.
"Get out there and get your nose against the fence under the sign mister!" she seethed.
Grant knew Jenna meant business so hobbled outside comically , shorts at his knees and trying to cover his nakedness with his hands.
Jenna had a firm hold of his ear to guide him to the proper place.

Connie smiled and regarded the sight of this grown man with his well spanked bare bottom on display.
Even little Jimmy saw the humour in it , remarking "Boy is his bum red ! You won't see me running around the pool again Aunt Jenna!"

Smirking , Jenna opened the container to return the paddle ,but Connie beckoned her to stop.
"Best keep that out Jenna. Dan will be here shortly and I'm going to need it to explain to him who really wears the pants around here. There's one thing for sure , his pants will be coming down!" she said.
"That's my big Sis!" Jenna beamed proudly. 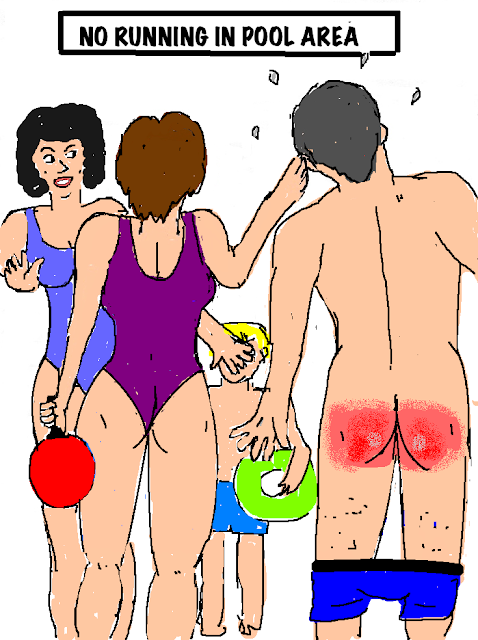