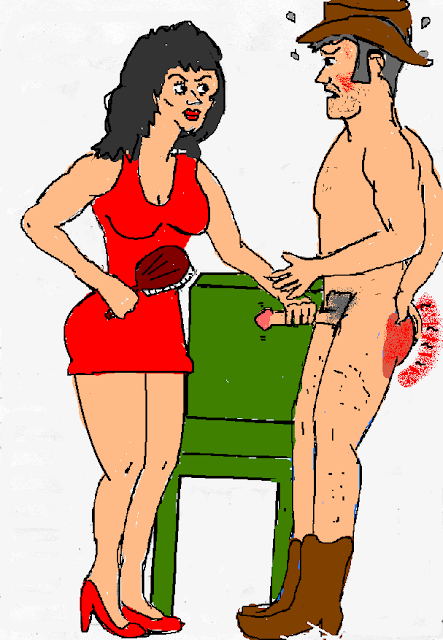 It's not easy for a Cowboy with his old fashioned ways  to court a modern City Girl.

Clint was used to the old fashioned ,  feisty ,  spunky girls from back home .
Like the wild  Broncos he rode for a living , Clint was always able to tame them  , usually by giving them a good old fashioned spanking!

But these City gals were way different from the girls back home. Sure , they were pretty , and just as feisty  , but trying to tame them was not so easy ,   even for a handsome , charming Cowboy like Clint.

Clint's new girlfriend , Veronica , would  not tolerate any behaviour that would be accepted by the gals back home as normal .
Things like cussin' , spittin' , drinking , calling her ' my li'l fillie ' , or giving her a playful slap on the rump were not tolerated by the lovely Veronica.

Even though Clint was twice as big and much stronger than his girlfriend ,there was something about the tone and authority in her voice which had the big Cowboy bending to her will.

Clint had no idea why , but when that voice commanded him to do something , he would just do it without question and an obedient "Yes Ma'am!".

Veronica wasted no time in informing Clint of the ways of the City Girl.
If he should  say or do anything to displease her , she would take him over her knee and give him a good old fashioned spanking !
"Did you say spank? Me?" Clint asked her in disbelief.
He quickly found out that City girls mean what they say.

That scary female voice ordered Clint to take off all his clothes and stand before her ,  naked as a bird.
Just to remind him he was a Cowboy about to be tamed,  she let him  keep on his cowboy hat and boots.
Veronica thought he looked cute this way.
"I read somewhere that cowboys like to die with their boots on , so my Cowboy will be spanked with  his boots on!" she cackled.

Back home , Clint loved nothing better than to take a little fillie over his lap , flip up her skirt and warm her cute little rear.
Afterwards she would swoon and melt into his arms.

But there was no way Veronica was ever going to allow him to take her over his lap.
No , in the City  things were different.
She was the one who would be doing the spanking and , cowboy or not, he'd better get used to going over her knee.

The first time Veronica  had sat down , patted her lap , and informed Clint he was to be spanked, he could easily have walked away ,or even  picked her up and turned the tables to show her who wears the pants ,  but there was something so inviting and irresistible  about those beautiful , smooth , bronzed thighs that drew him over them.

Perhaps it was that firm tone  , that deep voice Veronica  used ,which reminded him so much  of his Grandma when he would get into trouble with her as a kid.

"Get over my lap!"
"Yes Ma'am!"
In an instant , there he was , face down over this little lady's lap , cowboy hat and boots still on, waiting for her to spank his bare bottom until it was red ,just like Grandma used to do.
She even used a hairbrush like Grandma's!

As he lay over Veronica's lap being scolded ? Clint thought to himself.
"No problem! I can take it.  My rump is tough from all those long days in he saddle , and she's so tiny.
How bad could it be?"

However ? he had clearly underestimated his little City Girl and the power of her hairbrush!
When the back of that darn brush connected with his tough hide , he could not believe how much it hurt , so our stubborn  Cowpoke gritted his teeth and braced himself to take his licking like a man.

But  despite his best efforts , his stubborn resistance did not last long.
Soon , involuntary 'OW's' and 'OUCHES' were escaping from his lips.
His rump was stinging like he'd sat on a wasp nest.

As the burning in his backside intensified ,he  kicked his feet , hollering and sqealing even worse than the girls he loved to spank back home!

This tough cowboy  could stay on the wildest , powerful , bucking broncos on the planet, but here he was , struggling to staying in place  over this tiny lady's lap as she soundly walloped  his bare bottom!

Yes now  it was Clint doing all the bucking and squirming as that darn hairbrush danced all over his rear end , scorching his skin.
The more Clint kicked , screamed and pleaded ,  the harder and faster Veronica spanked- and the more it hurt.

As she spanked her man , Veronica lectured and scolded him about his behaviour.
Clint was so anxious for the spanking to stop ,he agreed to everything with a frantic  "YES MA'AM!"

Veronica knew her mustang was close to breaking now , so she concentrated her efforts where Clint ' s seat met the hard saddle.
This was one Cowboy who was going to be riding high for quite a while!

Clint ' s humiliation did not end with the spanking.
No, Veronica promptly  sent him to stand naked  in the corner , hands on his head so they could not sooth his well toasted buns .

He wanted so badly to give his burning rump a good rub , but did not dare to try as he knew it meant he would be back over Veronica ' s lap for more.

As her boyfriend stood in the corner , hopping from foot to foot , for what seemed like hours  to Clint  ,  Veronica sat satisfied and comfortable on the sofa , admiring her handiwork and incessantly teasing her big Cowboy.

"You're not such a big tough man now are you?"
"Boy is your bottom red!"
"I wonder what your Cowpoke friends would say if they could see you now? I can't wait to tell them how I spank you."
"Does your bottom feel as hot as it looks Clint?"
She even phoned her girlfriends and proudly told them how she had spanked her Cowboy and even sent them photos of his cute red rear!

As Clint stood in the corner , responding to his girlfriend's teasing with subdued "Yes Ma'ams", he still felt tremendously excited.
The more Veronica teased , the more Clint's erection grew.

When Veronica finally released him from the corner , her face lit up to see his huge shaft standing at attention just for her.
"It seems a good spanking gets my  Cowboy excited!" she laughed,  wrapping a hand around his member to lead him to the bedroom.
"Come with me Cowboy...I'm not finished with you yet!" she grinned impishly.

Once in the bedroom , Veronica pushed her man  back into the bed ,and Clint winced when his sore butt touched the sheets.
"Get ready Cowboy.....this time I'll be the one doing the riding!" she smirked , stepping out of her dress.