Reminiscing about the strap - Spanking story 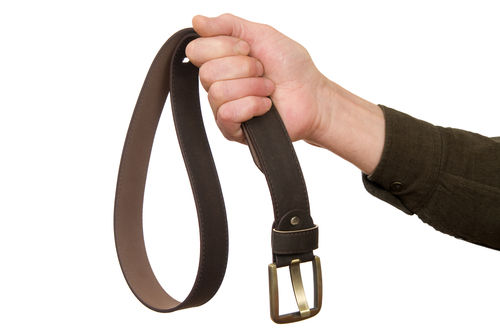 Gina blushed a little as the usual conversation came up at the latest family reunion.

Her younger sisters loved reminiscing about their various naughty childhood exploits and how they had all received a dose of their Father's strap as punishment.

"How come Dad never gave you the strap Gina? You got into just as much trouble as the rest of us?" her sister Maria asked.
Sisters Mary and Josie  joined in , pressuring their big sister to answer.
"She was Dad's favorite that's why !"
"Yea....Gina was little good two shoes!"

The teasing was incessant but Gina had heard it all before and simply smiled , refusing to be drawn in to the topic and leaving her sisters to share their childhood 'strapping' experiences.
If truth be told , Gina did harbour some guilt at escaping the punishment her sisters had received , but there was no way she was going to let it show.

Gina's husband Danny and the other husbands sat quietly listening .
Danny had heard all the childhood strapping tales before but was still intrigued ,  especially considering that a well used leather strap , oddly similar to the one used by Gina's Dad , hung on a hook in their bedroom closet.
However , this strap was never used on their children.
No , this well worn piece of supple leather was reserved exclusively for Danny ' s backside!

This strap had made its first appearance back when the two were dating.
He and Gina had a disagreement  about something and he recalls losing his temper and swearing at her.
He immediately apologized but that was not enough for his outraged girlfriend.
To this day he has no idea how it came to be there , but in a moment , the strap he would came to dread was in his future wife's hands.
When she calmly informed him that he was going to be punished for swearing at her , Danny thought she was joking.
However , this was when Danny learned that Gina did not joke about such matters.
So after a brief protest, he agreed to accept his punishment .

Danny was expecting a few playful whacks on the seat of his jeans , but had underestimated his girlfriend.
Gina had him stand with his hands against the wall and then began undoing his pants.

"Hey! What are you doing Gina?" he protested , flinging an arm back to secure his pants.
"OUCH !" he yelped when Gina slapped the back of his hand with the strap.
"That just earned you 6 extra swats mister. Keep those hands on the wall......in this house naughty boys get the strap on their bare bottoms!" she scolded.
Without skipping  A beat , she continued undoing Danny ' s jeans ,jerking them down to his ankles.
His shorts followed suit and then Gina hoisted his shirt tails to expose his lily white bare bottom.

Then Gina went to work with the strap on Danny's bare backside ,winding up and bringing it down with a full follow through ,producing a loud 'CRAACK!'when it connected.
It stung like crazy and Danny could not help letting out a loud yelp.
"YEOOOW! "
He struggled to stay on place as his first strapping continued with Gina occasionally pausing to order him back against the wall with his bottom out when he broke decorum.
'CRAAACK!' 'CRAAAACK!' ' CRAAACK!'
"Please Gina....no more...I'll never swear at you again honestly!" He pleaded.
Gina flung her head back indignantly , "You're darn right you'd better not mister!" she scolded , ignoring his wailing until a full 25 stinging licks had been administered and she had added  a further 6 for his initial resistance.

Danny remembered how had hopped around the room, pants still at his ankles , rubbing his backside while Gina laughed at him.
Gina took great satisfaction from  the fact her boyfriend had no desire to sit for the next day , and admired the marks her strap had left on his backside.
From then on ,that strap became an intricate part of their relationship and one of the reasons for 23 years of happy marriage.

After the family reunion  , as Gina and Danny  prepared for bed , Gina opened the closet and retrieved the strap.
She stood studying it for a moment before looking up at Danny.
His jaw dropped , "No! Not a strapping Gina...what did I do?" he whined.

His wife raised her head , flicking back her long mane of hair.
"Don't worry sweetie , your cute little tush is safe....for now .Actually I was wondering if you would do me a favour ....." she began.
Danny raised a brow in puzzlement.
".....you know, after all these years,  I really do feel guilty about being exempt  from Dad's strap.....so I was wondering if you would be good enough to help me erase some of that guilt?"she asked.

Then handing her confused husband  the strap , she turned around placed both elbows on the bed ,and raised her glorious bottom high in the air.
Gina  wore only a skimpy pair of black lace pantieswhich would offer no protection from the nasty strap.
Danny ran his fingers over the soft ,silky skin of his wife's shapely twin globes and slowly eased her panties over her hips .

With his wife's beautiful bare bottom at his disposal for the first time , Danny was unsure how to proceed.
Being on the receiving end of many strappings had not prepared him at all for administering one , so he started of tentatively delivering moderate slaps to Gina ' s expectant cheeks.

After the 5th blow , Gina s head swung angrily to look at him, "Really Danny? That's the best you can do? Put your heart into it and swing that strap  like you mean it .....or so help me we'll be changing places!", she warned him.
Danny took a step back , "OK Honey.....if that's what you want...... hold on." he replied raising the strap over his shoulder.
'CRAACK! '
"GAAAAAH ! That's more like it!" his wife gasped.
Encouraged and turned on ,  Danny delivered 3 more licks at the same weight , producing loud shrieks from his wife.
'THWAACK! "
"OOOW! OMIGOSH That was a beauty! MORE!" she hollered.

Danny stuck to his task and found himself getting into a rythym as he thoroughly thrashed Gina ' s jiggling bottom. He was beginning to understand why his wife derived so much pleasure from strapping his bare bottom. It was a real turn on.

For Gina , the strapping was not only turning her on , but starting to expel her feelings of guilt with every lick. Her bottom was bright red snd felt like it was on fire but she loved it!
After delivering a full dozen good hard l licks , Danny examined the welts forming on his wife's globes and decided that was enough.
"Your bottom is very red honey...I think that should do for now." he told her.

Gina looked at him in disbelief , "Are you kidding ? Give me another dozen.....hard as you can!"she demanded.
Her husband shrugged his shoulders ,"OK hun...if you say so...." he declared.
This time he really wound  up ,bringing the strap down on full swing onto his target.

As her strapping intensified , Danny noticed that his wife was s tugging to remain in position, feet hopping and her bottom wiggling to avoid the strap.
She let out a guttural scream when the strap wrapped around her right flank on one of the final four stinging licks but managed to stay in place.
Afterwards Gina remained bent over ,  breathing heavily ,  before carefully raising her weight from her elbows to her palms.

She let out a groan when her husband lovingly applied  some cold , cooling cream to her roasted behind , just as she did to him after a hard strapping.
It felt so good.
Danny allowed his fingers to venture inside her as he continued to rub in the soothing cream.
"OOOOOOOH!" Gina cooed with pleasure.

Gina began to rise , but Danny held her in place  with a strong hand on her shoulder.
"You're going nowhere girl!" he told her , fumbling with his shorts to release his erection.

Gina parted her legs in anticipation and leaned further forward , thrusting her bottom out toward him.
"Give it to me...HARD!"she moaned.

Danny's shaft  slid deep inside her and the room was soon filled with  loud slapping sounds as he thrusted against Gina ' s hot jiggling cheeks until they both exploded in fierce orgasms.

The following morning , Gina's virgin bottom was still red and sore as she lay face down on the bed with Danny tenderly caressing her tender skin.
"Well now you've finally got that strapping you can tell your sisters to stop teasing you about it ....problem is , how are they going to know?" he posed.

Feeling relieved and satisfied , Gina turned her head and grinned.
"That's easy honey ! Fetch the strap and lay it on my back sweetie....."she asked.
Her husband raised a brow quizzically.
"....then you can use my phone to take a picture of the strap and my bottom while it's still nice and red so I can send it to my sisters!" she added.

Gina ' s sister Maria chuckled when she  read Gina's text message and the accompanying photo of her red , sore behind.
'Finally got that strapping I deserve!'
Maria shifted uncomfortably on the pillow she was sitting on and replied to the text , attaching a pic of her own red hinie ' Me too!' .
Gina laughed when she saw the pic of Maria's bare behind which looked just as red and sore as hers.
Within seconds , younger siblings Mary and Josie were sharing similar pics to giggles from their big sister.

Danny looked curiously at his amused wife.
"So do you think that will shut them up Gina?" he asked.
"I don't know about that honey , but any discussions we have in the future about the strap will have a very different perspective....." she grinned.

Danny shook his head in disbelief, reaching out  to retrieve the strap from Gina's back.
"What do you think you're doing mister?" she asked firmly.
"Why I'm putting it back in the closet of course...the kids will be up soon." Danny explained.

Gina grimaced when she raised herself gingerly onto her tender bottom and picked up the strap.
"It's your turn mister....get those shorts down and bend over....my sisters and I have a few more pictures we would like to share! " she smirked.

About 10 minutes later , Danny remained bent over the bed while Gina was focussed her camera lens on his well strapped behind.
"Hurry up honey.....my butt is really sore.....did you have to strap me that hard?" he whined.
Gina giggled , she loved the sight of the little dimples on her husband's cute red bottom.
"Smile dear.....this one's for the family album!" she teased.