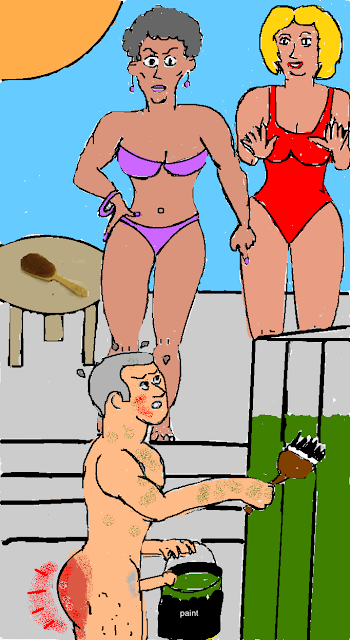 "Anybody Home?" Cindy called out as she entered the backyard of their next door neighbours , Bill and Sharon.
It was another blazing hot day and Bill and Sharon had an open invitation with Cindy and her husband Carl to come and use their pool .

Carl was off golfing  , so Cindy decided to pay a visit to their good friends and cool off.
Venturing closer to the pool she smiled when she spied a familiar object laid out on one of the patio tables.
In fact she owned one just like it , a nice big antique hairbrush , perfectly suited for chastising naughty male bottoms.

She recalled the events of the previous evening and had a feeling Sharon's hairbrush would be seeing some action.
Sharon had been complementing her on their freshly painted deck and complained about how Bill kept putting off the task of painting their deck.
"He's had the paint and supplies in the garage for a month but he is just not motivated to get going!" Sharon sighed.
Bill bristled , "You know I'll get it done eventually so stop nagging me!!Saturday is my golf day and Sunday is a day of rest !"

Cindy grinned and glanced at Carl.
"Sometimes we need to get you guys motivated to get things done so I 'motivated" Carl to postpone his golf game and get the painting done!"
Bill puffed in disbelief , " You must be quite the motivator to manage that!"
"Let's just say I have my methods......don't I darling?" Cindy teased her red-faced husband who appeared too preoccupied studying the table to respond.
"Maybe it's time you 'motivated' Bill to start painting Sharon?" she winked at her friend.

Bill shifted uncomfortably in his seat and raised a palm to placate his his wife's mischieveous grin.
"Uh uh honey.....Carl and I are golfing tomorrow!" he said nervously.
"Let's have a private discussion on how I can motivate you when we get home sweetie shall we?" Sharon replied.

Cindy chuckled to herself. She knew exactly what Sharon had in mind and , judging by his reaction , so did Bill!
In fact both ladies had been spanking their husbands for years , and a good spanking was Cindy's  'motivatation' for Carl to paint the deck last week.

Sharon realized she had been too lenient with Bill lately and he had taken full advantage of her.
It was time to assert her authority again and give him the same treatment Carl had received last week.
"Sounds like that deck is going to be painted green this weekend?" Cindy cackled.
"Not before I paint something red....fire engine red !" Sharon added with a giggle.
Bill was looking decidedly uncomfortable now but he knew better than to argue.

After their friends departed , Carl stood with arms folded , "Well I guess I better start calling around for a golf partner tomorrow....I get the feeling Bill is going to cancel," he sighed.
"Whatever gave you that idea Silly!" his wife replied wryly.

Sure enough , early on Saturday morning , Carl was not surprised to receive a text message from Bill, ' sorry bud...have to cancel golf today....feeling poorly'
However , Carl may have been surprised had he been able to see the scene unfolding on the other end of the text.

Sharon was sitting  on the spanking chair , hairbrush at the ready , watching a stark naked Bill send the message.
Then , curling a finger, she beckoned her husband to her."Over you go mister!" she ordered , patting her lap , " You've had this coming for a long time and now you're gonna get it .......and if that deck is not painted to my satisfaction by noon you'll be getting  a dose of the strap as well!" she warned.

The painting project was well under way upon Cindy's unexpected visit.
Bill panicked when he heard his neighbours voice , not because he was embarrassed that Sharon had indeed 'motivated' him to paint the deck , but because Sharon insisted he perform the task stark naked and with his blazing red bottom on full display !

Bill's eyes scanned for a place to hide as Cindy approached nearer ,  but was saved when Sharon appeared.
"Oh hi Cindy , I was just about to go for a swim myself." she smiled.
"How is Bill? Carl told me he cancelled golf because he was feeling poorly..." Cindy asked.
Sharon giggled girlishly ,"Well a certain part of his anatomy will be feeling poorly for quite a while , but it's nothing to stop him painting the deck!" she declared proudly , pointing to the hairbrush.
Her friend clapped her hands excitedly, "I hope you gave it too him good....he was quite rude to you last night...may I have a look?"
Sharon grinned , " Why not.....it's the least he deserves ....Bill! Cindy's here for a swim but she'd like to see the deck." she shouted.

Flustered , Bill tried to hide his privates with the paint can , but it was never going to conceal his very conspicuous erection , especially since the deck was a level lower and the two ladies were looking down at him.
"Happy to see me Bill?" Cindy teased , "Nice shade of red Sharon!" she chuckled pointing at poor Bill's well spanked backside.
Sharon beamed proudly , "Yes its a shade darker than usual,  but it's been a while since his last spanking so I decided to make it special! Turn around honey and give Cindy a good look at your naughty bottom!"

The heat from Bill's face almost matched the intense burning in his rear.
Cindy looked impressed , "Nice! You didn't miss a spot...he's gonna be feeling that for the next day or two!" she complemented.
Sharon waved her hand imperiously at her humiliated husband , " OK Back to work Sweetheart....one more coat and then you can join us in the pool." she told him .
Then she turned to Cindy and began easing herself out of her bikini.
Cindy grinned and wiggled out of her one piece , "Skinny dipping is way more fun than golf! she teased , dramatically dropping her swimsuit on the floor to display her voluptuous body to Bill.
Sharon wiggled her bare bottom seductively at Bill ."Is that enough 'motivation' for you sweetie?",  she purred.