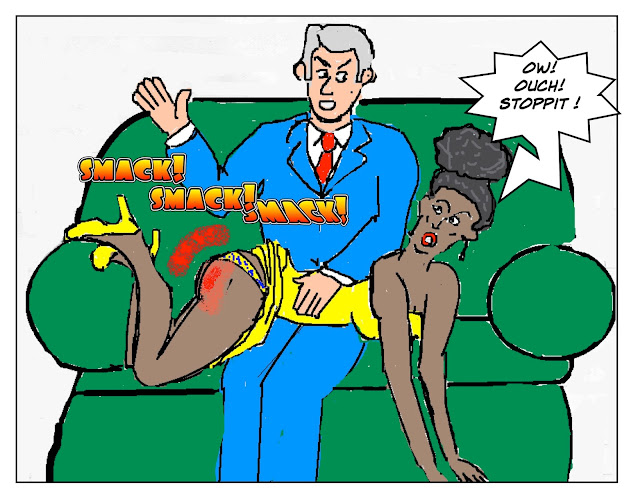 Sunnie raised her glass , “One more round of Bellini’s for everyone!” she gushed  to applause from her enthusiastic employees.
It was unlike the sensible and responsible businesswoman everyone knew , so everyone was surprised , none more so than her fiancee Marcel who was seated beside her.
The pair seemed to be a contrast , not just physically .
Sunnie was very petite yet athletic , with dark velvety skin ,and possessed  the stunning features typical of Ethiopian women , big almond eyes , high cheekbones , long neck and that wonderful hair that was her trademark.
Marcel at 6’3” towered over Sunnie and  had all the charm , good looks and elegance of a typical French man.
Personality wise , they  appeared to be opposites Sunnie energetic , fun-loving  and relaxed and Marcel reserved , formal and always in control.

Sunnie escaped the turmoil of her native land and was able to start a new life  in America .
It had taken her years of hard work , with many ups and downs along the way , but 20 years later at the ripe age of 45 she now owned a chain of successful fashion stores which employed over 100 people.
Despite her success , Sunnie always remained loysl to her humble roots so treated her employees respectfully and very well.
Marcel admired Sunnie immensely and felt very fortunate to be in a relationship with her.
Not only was she a stunning beauty and a confident , shrewd businesswoman but she was a deeply good and caring person also.
The only child of French diplomats , his life could not have been any different from Sunnie's.
He went to the best schools , plying his trade with large multi-national companies before branching out into his own successful consulting business.
During their time together , Marcel came to know Sunnie well , especially  her big weakness which was her impulsiveness and wild temper which she sometimes fought to control.
Tonight was an example.
The dinner was to celebrate a recognition award for Sunnie's business , and  started out with some decorum but overindulgence of alcohol soon took it in a different direction.

The extent of Marcel’s drinking  was to sip a glass of fine wine , so he was able to see trouble arising where Sunnie did not.
More than once during the evening he had advised her  to tone it down but she ignored him teasing thst he was just being a ‘wet blanket’.
However , for Marcel this was getting serious.
He realised Sunnie’s generosity  could be placing some of the employees in danger should they drive home under the influence of alcohol  , risking liability for both her and her business as she was the one plying them with liquor.
Leaning close to his fisncee's ear , Marcel whispered her a final warning.
“I think everyone has had enough drinks for one evening Sunnie.it’s getting late and you need to make sure everyone gets home safely….” He whispered , a hint of warning in his tone,
Sunnie’s response was indignation and denial .
Defiantly she stood up and encouraged more drinks.
“Nonsense Marcel….stop lecturing me ..can’t you see the night is young !” she giggled , raising her glass again.

A dark shadow surrounded her when Marcel stood up , and pried her glass from her tiny fingers.
Marcel gave her a serious glance which she recognized well.
“Time to say goodnight darling…” he warned her.
The feisty Sunnie  was not about to be bullied by anyone and held her ground , glaring up at Marcel defiantly.
Meanwhile her employees looked on with great interest at the standoff , some offering words of encouragement to their boss to extend the party.
Sunnie grabbed another glass and opened her mouth to speak , but the words morphed into a girlish squeal when Marcel delivered a hefty smack to the seat of her tight skirt. 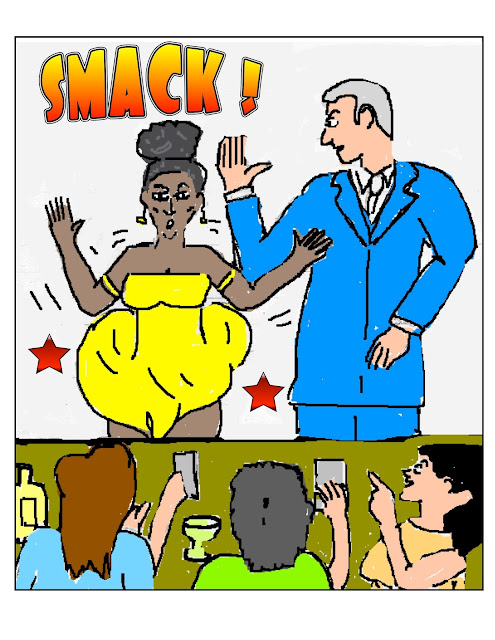 The act stunned the room to silence and Sunnie  felt her face burning with embarrassment.
“Don’t make me take you across my knee right here in front of everybody young lady! Now are you going to wind this down sensibly or shall I?”  Marcel whispered in her ear.
Sunnie’s bottom burned from the smack and she put a palm back to rub it.
She knew Marcel was serious ,  and knew from experience he would do exactly as he had warned .

In fact , only last week he had done just that at  Sunnie’s family gathering when she started an argument at the table.
When Sunnie's mother tried to calm things  , Sunnie rudely blurted  "‘shut up mother!”
She immediately regretted her outburst , but before she could offer an apology , Marcel had hauled her from her chair , placed her over his knee and proceeded to administer a brief but stinging spanking .
Astonished,Sunnie’s’ mother and the entire family laughed and cheered Marcel on .
He added to his fianee's embarrassment by flipping her skirt up and delivering a final flurry of spanks to her scantily clad and mostly bare posterior to everyone’s delight.
Afterwards Sunnie apologized , and her mother thanked Marcel for doing what she was unable to do.
The impromptu spanking ignited something  deep inside Sunnie and when they left she kissed Marcel passionately.
“I deserved that spanking.” She told him.
Her jaw dropped when Marcel replied , “Good  because when I get you home you’re getting  a ‘real spanking’”.
Marcel told  Sunnie to never speak to her mother like that again and , true to his word , she went over his knee again , baring her bottom this time for a  long , fiery spanking which ignited passion in both of them.
That night they made love in a way neither had experienced before.

Sunnie loved every minute of her spanking ….especially the mind blowing sex afterwards..
Marcel had hoisted her on top of him  , sitting on her well spanked bottom ‘cowgirl style’ , she slid  onto his shaft , as he cupped her hot cheeks in both hands
Tonight she knew she was in for another spanking , and was filled with anticipation.
Sunnie put down her glass and addressed the group.
“As you can see, for my own safety , or at least the safety of my butt, there will be no more drinks  tonight except coffee.. ….I want you all to have a safe journey home. Make sure you all take a cab home and send the bill to me .” she announced.
Marcel nodded his approval.
“Did you have to smack me so hard Marcel?” Sunnie pouted to a beaming Marcel.
“You were warned ….more than once ….and we will  be continuing this when we get home  !”he warned.
Sunnie felt her bottom tingle in anticipation.
The anticipation of a good spanking was almost as thrilling to her than the spanking itself , so by the  time the pair arrived home , her juices were flowing freely.
This did not escape the attention of Marcel , who teased Sunnie by avoiding any mention of her impending spanking as he made coffee for them both.
They sat down and held hands on the loveseat , casually chatting over the coffee until Marcel finally said , “You need to set a better example to your employees ...they are young , impressionable and really look up to you…”
Sunnie had to nodin agreement, “I know Marcel....I guess I need to be spanked….HARD!.”
“….and so you shall my dear….so you shall….” Marcel said , patting his lap.

Sunnie pouted , flashing her big eyes at Marcel before nestling her body over his muscular thighs.
An audible gasp escaped her lips when Marcel slowly lifted her dress to reveal her glistening , almost bare twin globes.
She wore the tiniest pair of yellow panties with blue polka dots which were so cute he decided to  leave them on.
They would offer no protection anyway.
Marcel spent a moment rearranging the skimpy garment to his satisfaction before commencing.
Slowly but firmly , Marcel spanked one round cheek and then the other.
Each one stung terribly and Sunnie  began squirming on Marcel’s lap .
He loved the way her pert  cheeks jiggled and how the  redness  would show through on  her dark , ebony skin until it became the predominate colour.

Sunnie's bottom was burning so she  gritted her teeth and took a firm grasp on Marcel’s leg.
She felt him adjust her on his lap , wrapping his right leg around both of hers , raising  her exposed  bottom even higher.
She knew the worst part was coming and felt so vulnerable….yet  so safe.

Marcel resumed the spanking ,this time briskly and much harder.
Sunnie yelped , bucking and squirming on Marcel's lap to avoid the onslaught which seemed never ending.
Her bottom felt like it was on fire now.
“Do you promise to set a good example to your employees ?” Marcel asked as he spanked away.
“Yessss….I do…..I dooooo…OOOW…I promise…..OW! YEOOW!”
Sunnie drew a breath when Marcel finally stopped spanking.
“Good! Because if you ever pull a stunt like that again this is what you will get!” Marcel declared.
Then he landed  hard spanks in volleys of  6 or 7 to each cheek which had Sunnie bawling like a baby .
When it was over he permitted her a minute to regain her composure before letting her up.
Marcel laughed  when Sunnie launched into a wild , frantic dance. 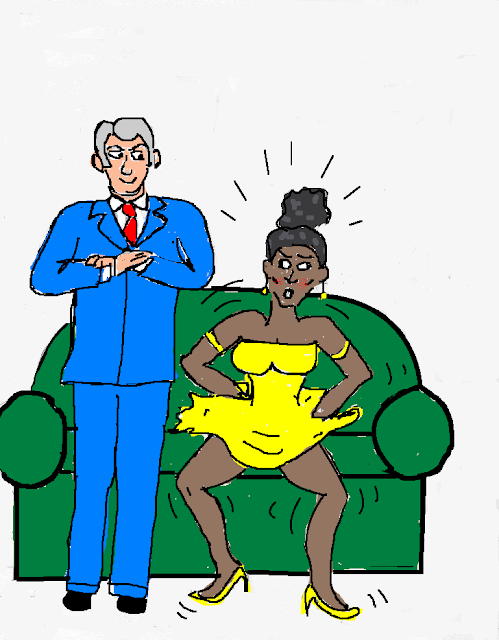 “Nice performance of  the Eskista Sara!” he cackled , referencing the traditional Ethiopian dance , involving a lot of shoulder movement he had seen Sunnie perform previously.
Sunnie   was certainly doing lots of that as she hopped around rubbing  her sore bottom furiously.
Marcel took her by the ear and led her to the corner.
“You can resume the Eskista later after your corner time!” he scolded.
Placing her nose in the corner , Sunnie held up her dress , exposing her blazing hot bottom for a full 5 minutes until he scooped her up into his arms and carried her upstairs.
All eyes were on Sunnie the next morning when she arrived at work , unusually later than usual.
She was positively glowing , especially her well spanked and still tender bottom.
There were smirks and grins at the table when she flinched and carefully sat herself down.
“Wendy..be a dear and fetch me a cushion please.” She requested nonchalantly.
“OMIGAWD….HE REALLY DID SPANK YOU DIDN’T HE?” Wendy gushed putting a hand to cover her mouth.


Sunnie grimaced and squirmed in her seat.Then  she said in her most matronly tone , “ Yes Marcel gave me a spanking ….and a good spanking wouldn’t do all of you any harm either!”
Her comment produced bowed heads and flushed faces in the room.

It was then Sunnie noticed she was not the only one in the room squirming on a pillow!
Posted by Glenmore at 12:09 PM