For a Good Cause - A Spanking Story 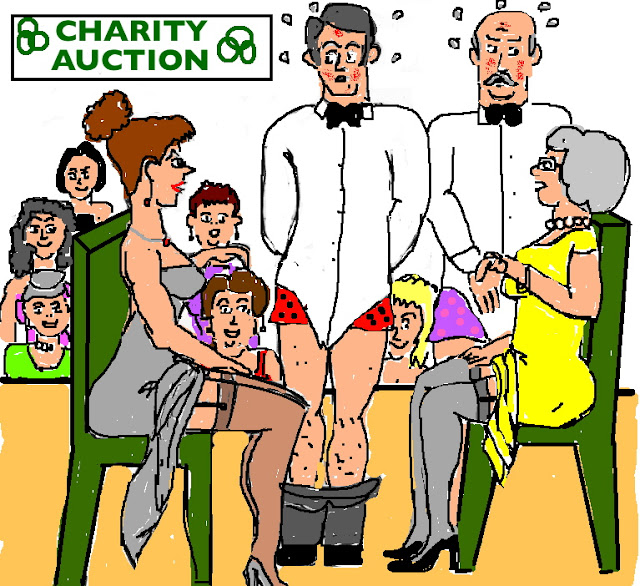 Valerie and Muriel took a moment to enjoy a drink and celebrate another successful Charity Ball at the prestigious Eldon Country Club.
It was the social event of the year and the room was full of wealthy donors , dignitaries and even a few local celebrities.
Even their reluctant husbands George and Henry seemed to be enjoying themselves , actively working the floor for donations.
It had been a mighty task but the two women were pleased that their efforts had yielded such generous results.

At that moment , Lady Bingham approached them to offer her congratulations.
"You ladies really outdid yourselves this year..." she beamed , ".....and I must say you are very lucky to have such wonderful husbands....such a great idea to auction off such 'unique' chairs !" the snobbish lady cackled.
Her comment produced raised eyebrows from Valerie and Muriel , making them both wonder exactly their husbands were up to.
"What Chairs?" Valerie asked , " What Auction?" Muriel chimed.

Lady Bingham continued , " Oh Yes , they are planning to auction off two matching green chairs....they are quite hideous , but apparently they have a special , mysterious use which they will reveal only to the person with the highest bid. I may just be tempted to acquire them myself just to satisfy my curiousity....I love secrets don't you?"

Valerie and Muriel were aghast .
"They wouldn't?" Muriel pondered, "Would they?"
"OMIGOSH! Apparently they would !" Valerie gasped pointing at a crowd gathering at the stage.
Trying to remain calm , they weaved their way over to where the slightly intoxicated tandem of George and Henry were already up on stage standing beside the two green chairs owned by she and Muriel.

The chairs certainly had a purpose the two ladies shared. They were spanking chairs!
The two wives would be seated on those very chairs quite regularly with a misbehaving husband draped over their lap to receive a bare bottom punishment.
However , in recent weeks it was their husbands' turn to sit on the chair to administer spankings to their naughty wives.
Valerie and Muriel quite enjoyed being  on the receiving end of a good spanking almost as much as spanking their hubbies and did not want to lose the chairs.
Clearly George and Henry had other ideas.

Despite the restrictions of her tight cocktail dress , Valerie hoisted herself onto the stage and grabbed the microphone from her husband before he could speak.
The crowd groaned in disappointment.
"Excuse me folks...Muriel and I just need a quick word with our husbands....." she told them .

"What are you two doing? This is not part of the program , and may I remind you , that those chairs belong to Muriel and I?" Valerie scolded.
George shrugged his shoulders , "Come on ladies its for a great cause !" he reasoned.
Muriel was fuming , " It's not just the chairs .....I believe the winner will getsto hear about some of our ....er....'family secrets' which quite frankly I would rather not share!"
Henry made an attempt to placate his wife , " Don't worry Muriel we'll only tell them its a spanking chair.....not who gets spanked."
Valerie blushed , "It ought to be fairly obvious to them who gets spanked!"

The crowd were becoming impatient now , so Muriel turned to Valerie.
"Then there is only one solution Valerie.....we will be the winning bid.....whatever it takes.....and these two will be paying the bill!"
Valerie wagged a finger at the two men , "Oh they'll be paying alright - and with more than just cash! These chairs will be coming home with us tonight - and be assured Muriel and I will  be sitting on them with you two jokers over our laps!"

The two men were stunned to silence .
"Start the auction George....you two deserve a good spanking right here on stage!" Valerie seethed.
Muriel grinned , "Mmmmmm....people would pay a lot more money to watch that Valerie." she mused.
A befuddled George took the microphone and began .
"Not only will the highest bidder receive these two beautiful , antique chairs , donated by our lovely wives, but we will reveal the secrets behind them....confidentially of course!"he declared .

Muriel and Valerie took their places with the other bidders .
They were silent at first and the bids quickly rose to $1,000.
Then Muriel bid $1,500 hoping to bring it to an end and teach their hubbies a lesson.
However , instead of silence , the distinctive voice of Lady Bingham rang out , "$2,000!"

Muriel looked at Valerie who quickly raised her hand to bid $3,000.
George and Henry stood with jaws agape , as if they were watching a tennis rally , their  heads swivelling back and forth between Lady Bingham and their wives.
It appeared their stunt would cost them a lot of money and those darn chairs would be coming home anyway - unless Lady Bingham saved their bacon!

The ladies duelled stubbornly back and forth until finally Lady Bingham balked at Muriel's bid of $8,000!
"Clearly you ladies do not wish to part with the chairs so it would be wrong of me to take them from you." she told them to loud applause.

Excited by their victory , Valerie and Muriel took to the stage again .
They gave their humbled husbands stern glares before addressing the audience.
They thanked everyone for making the evening such a success , even Henry and George , before soon surprising everyone.

"Muriel and I are very pleased that we be bringing our chairs home this evening , but we would be amiss by not letting you all in as to their primary purpose ."
George and Henry looked at each other  in confusion and with real concern when  their ladies seated themselves comfortably in their chairs.
"These are spanking chairs and we challenge all of you to donate $100 to see these two very naughty boys get the spanking they deserve right here on stage?" Muriel yelled into the microphone.
Many hands , all female , shot into the air and everyone cheered loudly.

"Come on gentlemen....as you just told us .....its for a good cause. Now get your pants down and get over our laps!" Valerie ordered .
There were loud cheers when the two wives hoisted their cocktail dresses to reveal shapely thighs and stocking tops , and patted their laps.
Reluctantly the two men downed their slacks and crawled into position.
More cheers and laughter arose when the unfortunate husbands' shirts were hoisted to reveal colourful boxers.

"For the sake of decorum we will allow them to keep their underwear on , and as our hairbrushes are at home they will get a hand spanking!" Valerie announced gleefully.
"But keep in mind ladies that a proper spanking must be on the bare bottom using a stout hairbrush or paddle....which is exactly what these two will receive once we get them home!" Muriel added.

Then they began.
The spanks the ladies administered with the palms of their hands were firm and crisp but largely symbolic.
Even so , it would be enough to render their husbands backsides red and stinging .
Their embarrassing comeuppance was richly deserved and showing everyone in the room how useful those green chairs were .

After about 100 or so good wallops , the red-faced men were allowed to rise and restore their pants while Valerie took to the microphone again.
"The party isn't over ladies , so please stay and enjoy yourselves everyone. Please excuse us however as we need to take these two gentlemen home for a 'real' spanking !"
George and Henry picked up the green chairs and could not get off the stage quickly enough .

When the couples returned home , those awful green chairs were promptly returned to their proper place in the household to remain there as a reminder to errant husbands of the consequences of poor behaviour.
While their men were busy stripping for their spanking , the two ladies removed their evening gowns and sat on the chairs .
In fact they were seated in those chairs , for quite some time that evening and made sure their husband would not be sitting comfortably for the next day or two.

For George and Henry , their humiliation was worsened by the fact that the two couples attended the charity golf tournament the next morning.
Valerie and Muriel were positively glowing with satisfaction , their husbands were glowing with  faces as red as their backsides.
Both men walked walked stiffly, grimacing with each painful step , and enduring amused smiles from the ladies and incessant teasing from the men .
Valerie and Muriel chuckled when they watched George and Henry painfully take their seats in the golf cart.
"Poor boys......your little bottoms must be very sore !" Valerie teased , "How about we make a little side bet on the game ? Losers get spanked ........and don't worry , Muriel and I will let you win!" she giggled.
The two men looked at each other and smiled. 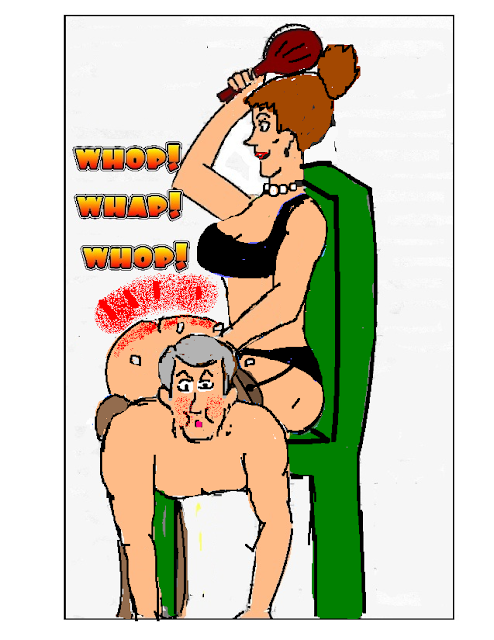