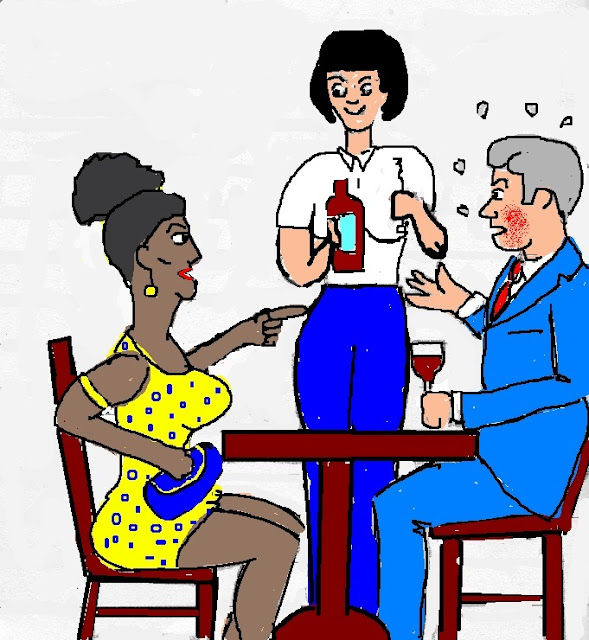 Sunnie's eyes widened and glared at her Fiancee Marcel.

"Really Marcel!How dare you make another public scene....that was totally unnecessary?
Can't you see it was an honest mistake."she scolded.

The young female waitress stood red-faced and embarrassed by Marcel's loud outburst which had turned heads in the restaurant ,but he was relieved that Sunnie had come to her defence.
"I'm so sorry Sir...I..." the young girl began , her voice wavering a little until Sunnie put a comforting hand on hers arm.
"You have nothing to be sorry for my dear.....but my Fiancee is going to be very sorry when I get him home tonight!" she announced , an impish smile playing on her lips.
Marcel bristled , "A good wine has to breath Sunnie...in France ....."he began but stopped  when the M'aitre arrived on the scene.

"I beg your pardon Monsieur is there a problem?" he asked Marcel.
As Marcel opened his mouth to respond , Sunnie intervened.
"Thank you for asking , but the only problem is my fiancee's poor manners , and that is something I need to deal with right now. Unfortunately we will need to leave for a short while , but would be most grateful if you could hold our reservation until we return ....it won't take long." she asked politely ,casting Marcel a warning glance.

Marcel's face flushed , "Please Sunnie, let's order dinner and we can discuss this later..." he asked , almost pleading.
The young waitress was very amused and impressed by this strong-willed lady taking charge .
Sunnie leaned closer to Marcel, "I'm afraid this can't wait darling!"
The M'aitre smiled at the scene as if he had seen it before .
"Best to do as Madame says Monsieur , we would be pleased to reserve your table until you return." he suggested.

Sunnie nodded at him ,"This young lady has provided such wonderful service so we hope she can be our server when we return?" she asked , her tone sounding more like a demand than a request.
"Of course Madame." came the reply.
"WHAT?" Marcel blurted incredulously.
Sunnie responded with an icy stare and wagged her finger .
"Fetch the car Marcel. Obviously the sooner I deal with you the better." she seethed .

By the time he returned with the car , Marcel had become somewhat  contrite.
"Look Sunnie...I'm sorry ...I shouldn't have made a scene again but can't we talk about this over dinner?" he reasoned.
Sunnie motioned for her fiancee to  open the car door for her and she only spoke when they were both comfortably seated.
"I've warned you about  making a scene in public Marcel. I felt so bad for that  poor girl . She was so embarrassed . You will be apologizing to her when we get back ....that is once I t's time I've taught you some manners." she scolded.

It was a short and silent drive home and once inside , Sunnie wasted no time in leading her naughty boy to the bedroom.
"Strip off....every stitch!" she barked , scooping her hairbrush from the dresser.
By the time Marcel had disrobed , Sunnie was sitting in the spanking chair waiting for him.
She had slipped out of her dress to avoid getting it wrinkled  by Marcel squirming on her lap.

The sight of his delectable Fiancee sitting in her skimpy undies , patting her shapely thighs had an expected effect on Marcel.
Sunnie looked at his erection and sighed in disappointment , "I suppose I'll have to take care of that before we start. Hands on your head Marcel !"

Marcel groaned , "AW NO SUNNIE...PLEASE?" he begged .
Sunnie put a hand on his shaft and began pumping it.
As Marcel became more excited she frustrated him by stopping and squeezing the base of his penis hard.
Slowly she would  edge him towards an orgasm before denying him again and again.
For Marcel it was a torture more severe that his impending spanking.

His member twitched uncontrollably and Sunnie giggled , thoroughly enjoying the control she was asserting.
"GAAH! OOH! PLEASE SUNNIE! NOO!" Marcel gasped , trying his best  to keep both hands on his head.
Sunnie dropped to her knees , allowing her lips to tease the tip of Marcel's member.
She caressed it with her tongue , sending him into a frenzy before clamping her hand tight to deny him yet again.
She began pumping  again , quickly this time before letting go and watching with glee as Marcel's penis shook and exploded like an out of control garden hose .
His penis twitched sperm squirting out onto the floor.

"Now you can get over my knee.I am going to blister your backside mister ." she ordered , patting her lap.
A thoroughly humbled Marcel , climbed over , placed both palms on the floor and braced for his ordeal. 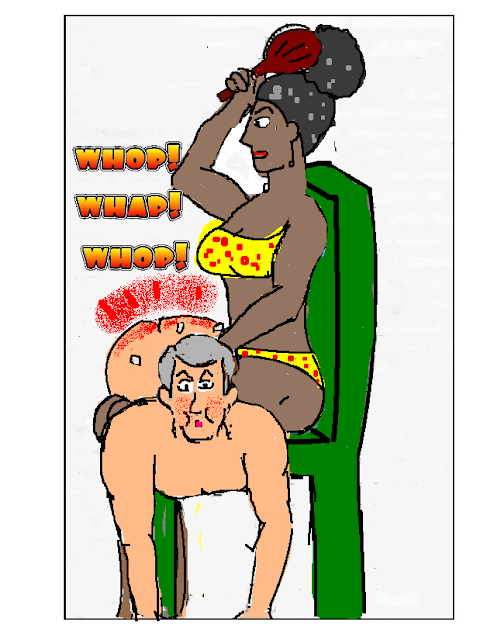 Sunnie leaned back in her chair.
"You may get up and get dressed now!" she announced imperiously.
Marcel staggered unsteadily to his feet , immediately cupping both of his battered cheeks with his hands.
Sunnie smiled with satisfaction as she stepped back into her dress and watched Marcel wince and grimace as he dressed.

As they stepped outside , Sunnie snatched the car keys from Marcel.
"Best I drive. You won't be able to concentrate on the road sitting on the sore backside I just gave you!" she teased.

Marcel endured a most uncomfortable drive back to the restaurant but his  humiliation was far from complete .
He dreaded having to face the young waitress he had insulted ,never mind apologizing.
As promised , their table awaited them , just as they had left it with their waitress already standing beside it.

The two women shared a grin.
"As you requested Madame , we have provided a nice soft pillow for Monsieur!" the waitress said , trying not to giggle.

Sunnie went ahead and giggled anyway.
"I'm can assure you ,  Monsieur appreciates that....don't you darling?" she teased.

"Yes Ma'am." a red-faced Marcel replied before  agonizingly lowering  himself onto the pillow.
Amused , Sunnie looked at him , "You can stop calling me Ma'am? now."
Marcel blushed an looked seriously at the waitress.
"I'd like to apologize for yelling at you. I'm very sorry." he told her earnestly.
The young waitress nodded , smiled broadly and launched into her well rehearsed menu introduction "Today's special is the roasted  rump roast ...." she began .
Sunnie laughed , "Monsieur has already had that!...tenderized and well done! "