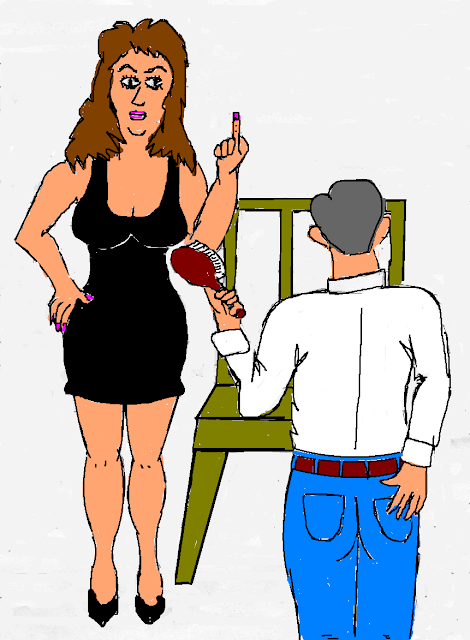 Almost 6 months into their marriage , Sonia and Charles were having their first genuinely earnest discussion on their relationship.

Sonia felt Charles was not 'pulling his weight' by shirking his share of the household chores , spending too much time with his single buddies and generally taking his wife for granted.
Initially , Charles was unaware and insensitive regarding the impact of his poor behaviour on their marriage , but as their discussion continued , he began to acknowledge that he did indeed need to make some serious changes.

However , Sonia was still not satisfied with this , and continued the discussion , whilst her new hubby was clearly no longer interested.
"Are we done now?" Charles asked , clearly trying to end a discussion which had become very uncomfortable for him.
His attitude only served to irk his wife even more.

Sonia let out an exasperated sigh.
"This discussion is done - for now Charles...." she began.
Charles smirked and rose from his seat.
".....but there is still the issue of your retribution!" she added calmly.
Her husband's brow furrowed in confusion.
"Retribution?" he asked.

Now it was Sonia's turn to stand and confront her husband.
"Yes Charles - retribution . If you check your dictionary you will find it means  'punishment for doing something wrong' " Sonia replied in her well rehearsed Schoolteacher tone.
"I'n not entirely satisfied that you are contrite regarding your behaviour Charles , and did you really think there would not be consequences?" she asked earnestly.

Her husband's face flushed and he replied in an involuntary , high-pitched tone , "Consequences?"
Sonia did not elaborate but simply took her chair , placed it in the middle of the room and sat down.
"In the top drawer of my dresser you'll find a nice big wooden hairbrush which I purchased for exactly this occasion. Be a good boy and fetch it for me please." she said in an imperious tone.

For a moment Charles stood frozen.
"A Hairbrush? What for?" he asked genuinely.
His wife shook her head , giggling mockingly.
"For your retribution of course silly....I'm going to give you a good , sound spanking on your bare bottom.....then we'll be done....for now!" she announced.

Her words spun her husband into a state of shock and disbelief.
"A spanking! Come on Sonia . you can't be serious?" he stammered.
Sonia raised a brow and wagged her finger at him.
"I am deadly serious Charles. You deserve a good spanking and I'm going to give it to you.
Now , do as I say and fetch my hairbrush !" she scolded impatiently.

Her husband was clearly battling between his male pride and his own guilt , but something inside told him he needed to obey his wife's command this time.
So he did, and moments later Sonia was rolling the brush in her hand , admiring the shiny varnish on the wood while Charles disrobed.

With her thoroughly humbled husband now naked before her , she patted her lap.
"Over you go." she ordered , and Charles obediently draped himself over her awaiting lap.
Sonia was clearly enjoying the control she was asserting over her errant husband.
"How ironic." she thought to herself. Here was the man she had vowed to love , honour and obey lying submissively over her lap waiting for her to administer his punishment.

While still lecturing her husband , she adjusted his position on her lap to her satisfaction.
She observed his lily white , muscular buttocks clenching in anticipation when she teased them with taps of the brush.
"I am going to blister your bottom mister, and you can expect the same from now on if you don't smarten up....do you understand?" she asked him.
"YES!" came the terse reply.
'WHACK!' "OOOW!"
She snapped the back of the brush against her husband's right cheek.
"You will refer to me as Ma'am until your retribution is complete!" she corrected , producing a frantic "YES MA'AM!" from Charles.

It was time to begin the retribution and they both knew that their marriage was about to take a turn for the better.