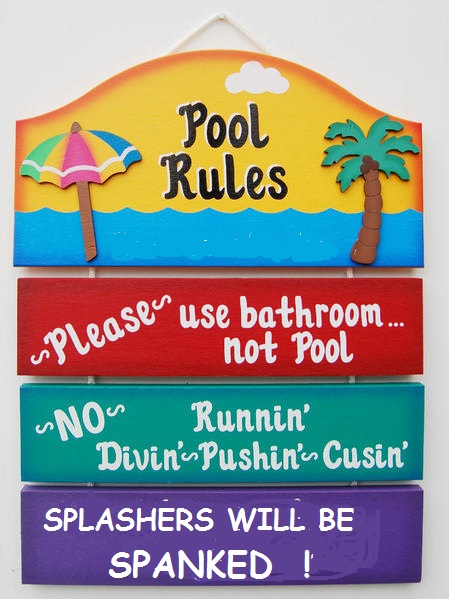 As Bill trudged off to the bedroom , Sally had mixed feelings.
Part of her felt bad about ‘pushing’ the issue about his playful , but childish splashing in the pool , but another part of her was excited and curious about what her friend was about to do to her husband.

Kate was not pleased about getting her hair wet  , and she expected some retribution  was in order , perhaps  a few firm swats on the seat of a wet swim-suit , but clearly Kate had something more intense in mind.
Sally would soon find out exactly what it was.
“Make us some Sangria's and then get your butt off to the bedroom and wait for me there!” Kate scolded.
Bill made no attempt at excuses and soon returned with the pitcher of sangria's as ordered.
When he made an attempt to pour himself one , his wife placed a palm over the top of his glass.
“UH OH……splashers don’t get rewarded……now off you go!” Kate told him.

The two ladies chatted and sipped on their Sangria's for a good 10 minutes or so , and when their glasses were almost empty  Kate rose and announced , “I’d best go take care of our naughty boy.”
“ I won’t be too long , then he can make another batch of Sangria's for us!” she added chirpily before making her way indoors.

It was a hot summer evening so the patio door was open .
Sally knew the bedroom was at the other end of the house , so she moved her chair closer , pinned back her ears and waited  for the action to begin.
She could faintly hear the sound of Kate’s voice,  speaking in a raised tone and the odd male grunt of agreement.
Then the silence was suddenly broken by  crack as loud as a gunshot  , quickly followed by another and another.

The sounds were sharp and crisp , not at all muffled , so Sally surmised poor Bill was getting it on the bare behind , and as the slaps continued , by all accounts was getting it real good !
After a while the whacks were accompanied by loud ‘ouches’ and ‘ows’ from Bill.
Sally tried to count the number of whacks but soon had trouble keeping up when Kate upped the pace, delivering rapid-fire combinations instead of single hard swats.
The count had to be  well over 200 before they finally stopped.

After a few seconds of silence , Sally heard the bedroom door open and quickly returned her chair to its position near the pool.
Kate emerged , looking content , glowing and confident.
Sally tried her best to act nonchalantly , as if nothing extraordinary had happened and Kate did the same.
“Bill’s making us some more drinks….and likely getting an ice pack for his backside !” she giggled.

True to form , a few minutes later Bill emerged with another pitcher of  cold sangria's.
He walked stiffly , his face  contorted in a grimace and still flushed from his ordeal.
“That ought to stop you from splashing for a while!” Sally announced , trying to lighten things up.
Bill put a hand back to sooth the seat of his suit. “OH YEA!” he replied with a forced grin.

“You can go back in the pool and cool off that backside if you want!” Kate offered , as if her husband  needed her permission.
Bill started for the pool but was halted by his wife’s palm.
“Just a minute Bill. Sally missed all the ‘action’ , and as you splashed her also , I think it’s only fair you show her how thoroughly you were punished?” she said , raising a brow seriously.

Bill hesitated , his face flushing even redder.
“Well then Bill ….Sally’s waiting….show her the damage!” she added impatiently.
Her husband sighed , turned  around and eased down  the back of his suit to reveal his sore bare behind.
Sally  gasped at the sight.
The skin was a lot more than the deep pink she expected  , distinctly red in fact and even a glowing red  and blistered at the top of his globes. In some areas , the texture was a rough , dry white  where the paddle had landed repeatedly.
She doubted if poor Bill would be sitting comfortably for a while.

“To your satisfaction girlfriend ?” Kate asked.
“Absolutely !” Sally  nodded.
Bill restored his suit and gratefully dived into the pool to cool off as best he could.

“Wow you really paddled him good Kate….his ass looks like it’s on fire!” Sally whispered.
“Of course it is!”,  Kate confirmed , “He's had that coming to him for a lot more than splashing …and I’m going to enjoy teasing him for the next day or so each time he winces and squirms when he sits !”

Sally shook her head , deeply impressed by her friend’s ability to keep her big ,  errant husband in line.
“I wish I had the guts to do that to Frank!” she sighed.
Kate looked at her friend seriously , “It certainly ‘beats’ nagging or arguing with them , pardon the pun , and it will improve you marriage I can assure you! Just the sight of my hairbrush or the paddle keeps Bill in line , and there’s no better way to get rid of all that frustration  men put us through by walloping their bare backsides!” Kate replied excitedly.

Sally contemplated her friend’s advice thoughtfully.
Perhaps she could do it ?
“There is another benefit girlfriend!” Kate added .
Sally raised a curious brow , “More benefits? Gosh! What?” she exclaimed.
Kate winked , “The sex we have after I’ve paddled Bill’s behind is out of this world….he’ll do anything to please me….and I mean anything!”

Just then , the pool gate opened and Frank appeared.
"I thought I'd find you here!" he said "It was roasting on the golf course I'd love a swim!"
Bill yelled to his friend , "Jump in....the water's great!"

"COWABUNGA!" Frank yelled and jumped into the pool with a huge splash which showered the two ladies.
Sally looked at Kate and both women smiled.
"It's time Frank learned the rules of the pool.....and a few other rules!" Sally declared.
Kate cackled , "I left the paddle out for you.....and don't stop until his ass looks like Bill's!"
Sally rose from her seat looking determined , "Oh you don't have to worry about that Kate!" she replied , "Bill ! Please explain to my husband what happens to splashers in ths pool!"