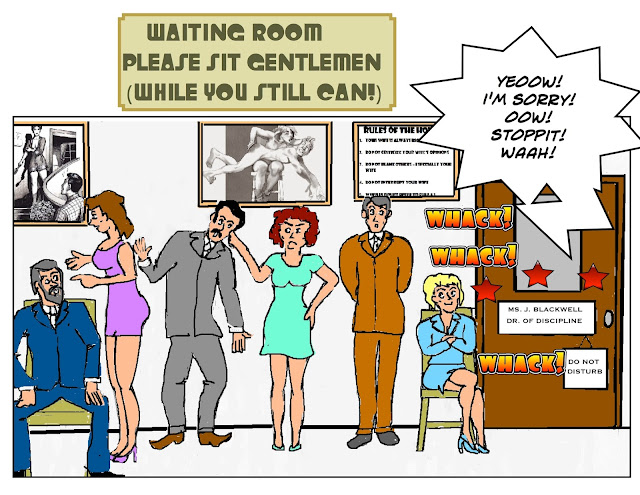 Susan tapped on the door to Dr. Janet Blackwell's office before poking her head inside.
"All your appointments for this morning have arrived Dr. Blackwell.
Shall I show the first one in?" she asked , handing janet a red file folder.

Dr. Blackwell took a moment to view the file before responding.
"The Cresswells' are back again I see!" she said , raising a brow , " Yes show them in Susan.."

Susan held the door open and a couple in their mid-forties entered.
Anita Cresswell glared at her husband , Tom who looked very sheepish.
Janet pointed to to one of the two chairs in front of her desk.
the chair Anita sat on was plush , well padded and comfy while the chair beside it was stark , wooden and hard.

"Make yourself comfortable Anita ." the Dr. said with a smile and put a hand up when Tom made a motion to sit on the other chair.
"I do not recall giving you permission to sit Cresswell...I can see why your wife has brought you back here so soon after your last session." she said sternly.

Tom Cresswell blushed , coughed nervously and stepped back in place.
"Sorry Ma'am." he muttered.
His wife shook her head and looked at him incredulously.
"It's amazing how your attitude changed the second Dr. Blackwell spoke to you!" she declared.

Janet peered at Tom Cresswell over the horn-rimmed glasses perched on her pretty nose.
"That is because you respect me isn't it Cresswell? Or is it because you know I'm going to give you the thrashing of your life?"

Her gaze turned to Anita.
"He does not afford you the same level of respect because you are clearly too lenient with him Anita."she scolded.
It was Anita's turn to look sheepish now.
"I gave you very specific instructions to follow , and had you done that you would not be back in my office so soon would you?"
"No Ma'am." Anita replied.

Tom Cresswell smirked , clearly enjoying the ear roasting his wife was enduring from Dr. Blackwell.
Unfortunately for him , it was not unnoticed.
Dr. Blackwell stood up and stared icily into his eyes.
"You Sir , can wipe that smile off your face and get your clothes off....every stitch!" she ordered.

Tom's jaw dropped , "My clothes...but...."
His protest was abruptly halted when Janet's palm slapped against his face.
"I SAID STRIP!  NAKED! NOW!" she yelled in his face.

As if someone had pressed fast forward , Tom discarded each item of his clothing and stood naked at attention.
Anita chuckled but her smile faded when the Dr. addressed her again.
"Listen carefully to me this time Anita.
I am going to give this stubborn husband of yours a thrashing he will never forget.
You will watch carefully , because once I am finished with him , he will receive a thrashing from you.
Take heed Anita , if I find that you are not thrashing him as soundly as he deserves , I will put you over my knee , and blister your backside with my hairbrush !
Understood?"
Anita was stunned .
"Yes Ma'am!"

Janet opened her desk drawer and produced the largest , monstrous looking paddle the Cresswells had ever seen.
It  was made of maple , 18" long , 1/4" thick and had holes in it for effectiveness.
Tom paled and a look of sheer terror enveloped his face.
He gulped and he could feel his knees knocking.

Janet pointed to the desk.
"Bend over and grip the sides of the desk Cresswell." she ordered curtly.
Tom promptly complied while his wife settled into her comfortable seat to observe.

Taking her position to Tom's left , Janet gripped the paddle with both hands.
Like a golfer , she adjusted her stance and raised the paddle above her head before bringing it down powerfully with a loud 'SPLAAATTTT!' against Tom's bare cheeks.
The sound was so loud it startled Susan and the other clients in the waiting room.
Tom's lungs  released a blood curdling wail .
"GAAAAAAH!"

He writhed on the desk but was able to stay in position.
"Keep your position or I will repeat the stroke Cresswell." Janet warned.
The big paddle rose and fell again and again on Tom's backside until it was blazing red , blistered and bruising.
He howled like a banshee throughout the punishment and even Anita felt a tinge of sympathy for him.
Janet paused after delivering  30 or so powerful whacks , leaving Tom a sobbing , sorry mess.

"I'm so sorry Anita....please make her stop !" Tom whinged.
Janet beckoned Anita to stand and handed her the paddle.
"Your turn Anita....and remember what I said." she warned.

A look of determination covered Anita's pretty face and she took the paddle from Janet.
"Stop your babbling Tom.....if you thought that was bad , just wait until I get going!" she said triumphantly.

Anita Cresswell was like a woman on a mission.
Weeks of frustration , enduring her husband's boorish behaviour , was vented on his already roasted bare backside.
There was no set amount of strokes as she normally did.
This time she just kept paddling his behind until she was satisfied , ignoring her husband's wailing , pleading and apologizing.

After delivering a final trio of massive whacks , she stopped to catch her breath.
"That' more like it Anita!" Janet congratulated her.
Then she motioned for a sore and sobbing Tom to rise.
"SIT!" she ordered , pointing to the hard chair.
Tom looked warily at the chair , amusing both ladies at his antics to lower his sore rear quarters onto it.

He sneakily managed to place the fingers of both hands under his thighs to elevate this tender sitting area slightly above the hard surface.
"HANDS CLASPED ON YOUR LAP MISTER !" Janet corrected him.
Tom removed his fingers and let out a pathetic , involuntary yelp when his tender skin met the harsh wood .

"Thomas Cresswell. Do you pledge to be respectful to your wife at all times and comply with the rules you have agreed on?" Janet asked.
"Yes Ma'am." Tom sighed.
"Look your wife and tell her Sir!"Janet prompted.
Through watery eyes , Tom apologized profusely to Anita.

Janet rose and extracted a thick , two-tailed yellow strap from the closet next to her desk.
She handed the strap to Anita Cresswell.
"Give him 40 whacks with this ...just to be sure he means it this time Anita ....10 on each hand , 10 on his thighs and 10 on his backside - make sure he is one sore boy for the next few days!"

Anita enthusiastically took the tawse from Janet.
"Please Anita....no more....not the tawse....please..." he begged.
"Hold out your hands!" Anita ordered.
Amusingly , poor Tom stomped his foot on the ground in a little tantrum before reluctantly offering both palms to Anita.
"That little exhibition just earned you another 5 mister." she scolded.

'THWAAAP!' 'THWAAAP!' "OOW!" "YEOOW!"
Alternating from palm to palm , Anita delivered 10 stingers to each hand then stood back in amusement and watched her naked husband hop up and down , waving his hands in the air in an effort to cool them off.
Wasting no time in continuing Tom's chastisement , Anita motioned him to bend over the desk.
Tom's backside was already red , blistered and swollen so she opted to deliver the remaining 20 strokes to the backs of his thighs.

Her husband's blood curdling screams startled the entire waiting room.
He squirmed and bucked on the desk but somehow managed to stay mostly in position until the full 20 strokes were done.
The strap left , ugly , red welts all across the backs of Tom's thighs.
He would not be sitting comfortably in the near future.

Meanwhile , in the waiting room , the wives teased their already terrified husbands about what awaited them.
Kyle Dennison was next in line and he stood stiffly and petrified while his wife Justine sat contently beside him.
"It won't be long now Kyle and it will be your turn." she teased.

Moments later , the door to Janet's office opened and Tom Cresswell hobbled out , his face red and tear-stained , sweat beading on his brow.
Anita guided him on a humiliating walk past the other couples to Susan's desk. 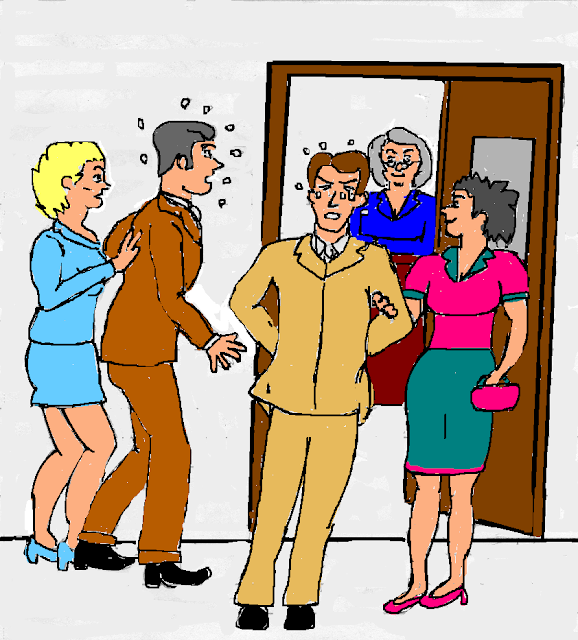 Tom's jaw dropped.
"$900!" he gasped.
Anita glared angrily at him.
"Pay it Tom!" she said in a threatening tone.
Tom sighed and promptly produced his credit card.

Susan happily handed Anita the receipt.
"Your next appointment is in 6 weeks from now but do call us if you need another session prior to that Mrs. Cresswell."

Janet took the next red file from Susan and scanned its contents.
"AH.....the Dennisons! Newlyweds! Please show them in Susan." she smiled.
Business was good.