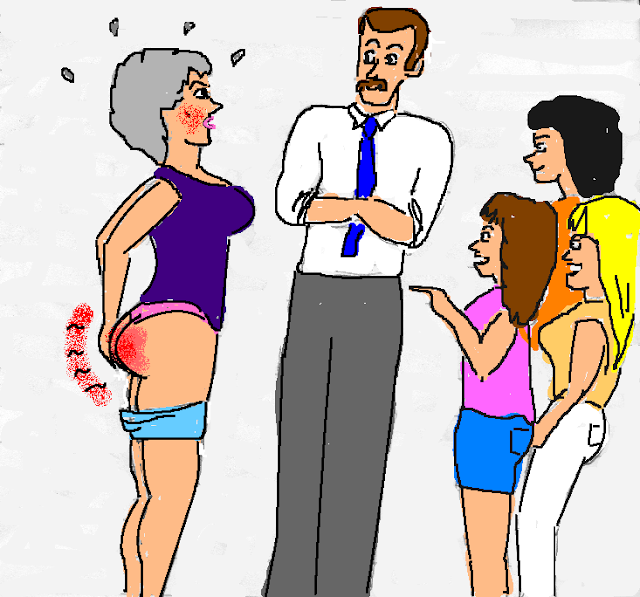 Debbie lay on the bed on her tummy , her two bare reddened globes on display.
Her boyfriend Dexter grinned and snuggled beside her , caressing her hot skin.
"Careful Dex....I'm pretty tender back there !" Debbie said with a wince .
"If you didn't act like a brat I wouldn't have to spank you so much!" Dexter scolded.
Debbie giggled."I guess it runs in the family...."
"What do you mean?" Dexter asked , raising a brow.


Debbie had always wondered if her insatiable desire to be spanked stemmed from seeing her Mom being spanked by her Dad .
"Because my Mom was a brat just like me ..." she relented.


It had been over 10 years ago since she had first saw her Mom spanked  , but Debbie still remembered like it was yesterday.

Mom was quite the character ,just like Debbie always rebellious , sassy , mischievious and a real teaser.
Her behaviour would infuriate Debbie's straight-laced Dad who felt she was not setting a good example for their 3 young daughters.
Mom loved clothes and always followed the latest fashion trends.
Back then she was well into her 40's but still had a firm , trim body so looked good in anything , but her tastes sometimes displeased Dad who would often lecture  her to dress according to her age.

One day Dad flipped when he saw Mom wearing a low-cut top and some 'way-too-short' cut-offs which  showed a little too much skin in the wrong places.
Of course Debbie and her sisters thought Mom looked great and was  cool  for dressing the way they wished they could.

Dad scolded Mom,  telling her that the shorts and top were not appropriate and ordered her to go change before dinner.
The girls were shocked when Mom bristled and told him she took orders from no-one....not even Dad...
...so they all looked on in anticipation.
Dad repeated his order and of course , feisty Mom adamantly refused  ,even  calling Dad a few choice names into the bargain .

What happened next , surprised them all - especially Mom!
Dad rose to his full 6' 4" stature , picked up petite Mom holding  her under his arm like a rag doll.
Her shorts rode up even further , exposing even more of Mom's shapely cheeks  and the girls all gasped when  Dad undid them and whisked them down!
Then he began briskly spanking  Mom's scantily clad bottom.
She wore very brief , pink bikini panties which exposed most of her cheeks.
It wasn't a long spanking but Debbie recalls how her Mom's cheeks jiggled and quickly turned a bright red.. 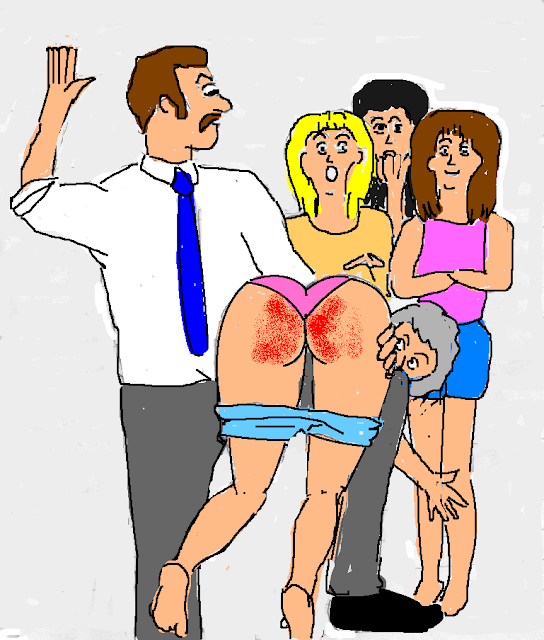 Mom's face was just as red when Dad stood her up and she looked so funny wiggling her hips trying to get back into her shorts.
There was a tense moment when they stared into each others eyes .
The girls looked on, wondering who would bend first.
Mom had a definite spark in her eye as she rubbed the seat of her shorts.
"Now go upstairs and change while the girls get dinner on the table." Dad said firmly.
For a moment it looked like Mom would relent but she replied cheekily , "I'll do no such thing you big brute ...you can't tell me what to wear!" she bristled, standing defiantly with hands on hips.
It was like she was saying the spanking was not enough and she wanted needed more!

Dad stood calmly with arms folded , a wry smile on his face as if he was actually pleased with his wife's resistance.
"Really? Well let's just see about that shall we?" he said .
Grabbing her arm he spun her around and delivered a hefty smack to the seat of her shorts ,propelling her towards the stairs.
He continued to smack her bottom all the way upstairs with Mom arguing and protesting all the way .
The girls waited until they  heard their bedroom door close behind them and promptly scurried upstairs to listen in.

Dad wasn't  saying much but there was a loud commotion and they could hear Mom protesting ,saying things like "STOP" and "IT'S NOT FAIR!"
"AW NOOOO!"
Mom whined in a child-like voice until  they were all jolted by a loud 'CRACK!' followed by a loud scream from Mom.
Another loud smack  followed , then another and followed by more yelps from Mom.

"He's spanking her on her bare butt with the hairbrush!" my elder sister whispered excitedly.
Mom's spanking  was a long ,hard one this time .
Dad soon settled into a rythym with his spanks and had Mom bawling like a baby.

The girls cringed and grimaced with every hard whack to Mom's cheeks
"That's gotta burn!" Debbie's little sister remarked as a particularly hard series of spanks found a tender spot.

Finally there was not a sound except for Mom's sobbing and apologizing.
There was movement in the room so the girls   hurriedly ran downstairs.
A moment later the door opened and the sound of Dad's footsteps on the stairs.
He was slightly out of breath but looked quite pleased with himself.
"Come on girls....I asked you to get dinner on the table....chop-chop....Mom will be down in a minute." he said.
After hearing Mom's punishment they  quickly did as we were told.


Everyone was  seated at the table when Mom came downstairs.
Fresh make-up , clad more conservatively in capri pants.
She tried to look her usual bubbly self but her forced smile could not hide a grimace and she walked stiffly to the table.

There was no sense hiding the fact that the girls had heard her receive one heck of a spanking , so forever the drama queen , Mom decided to make  a scene of it, rubbing her bottom vigorously before producing a small pillow from behind her back and placing it on her seat. 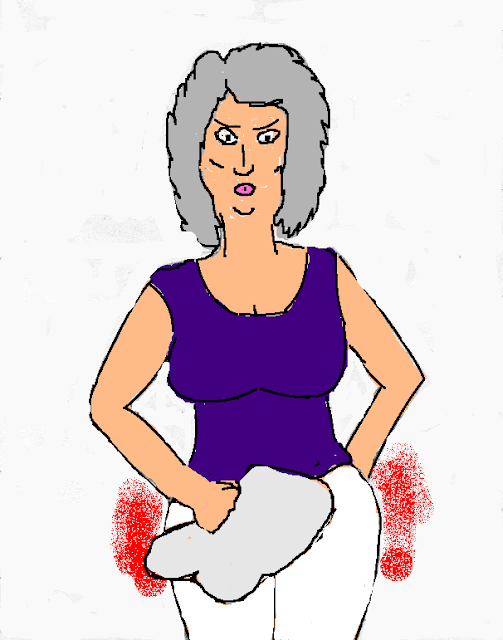 "I hope you're pleased with yourself Frederick..my
rear end is going to be sore for days  after that! It was well  deserved though I might add.." she added  , smiling at Dad.

Everyone giggled as Mom let out an exaggerated gasp and made a big scene of slowly lowering herself onto the pillow.

Mom squirmed and complained about her sore bottom all through dinner and Dad quite enjoyed teasing her about it.

Debbie could sense the sexual tension the spanking had created between her parents and felt stimulated herself.
She wondered what it felt like to be spanked by a strong man.

After that , Debbie would watch her parents closely and noted the veiled threats , the telltales signs like a hairbrush or wooden spoon left in an unfamiliar place , or the way Mom would squirm or wince when Dad would playfully pat her bottom, hoping she would  witness another spanking .

When the next event did eventually arrive a week or so later it caught Debbie completely off-guard.
Her parents had attended a posh dinner with some of Dad's clients so the babysitter had put the girls to bed by the time they arrived home.

They could hear Mom apologizing and pleading again so she must have done something to upset Dad.
Debbie crept out to the stair landing and saw Mom sitting on the sofa , nervously smoking a cigarette, awaiting Dad's return from driving the babysitter home.

Debbie had to duck back into her room when he returned as he immediately made his way upstairs  and emerged from her parent's room brandishing Mom's  hairbrush.
She heard him make sure the girls' bedroom doors were closed before she heard his steps downstairs.

It was pretty clear Mom was in for another spanking , and as the girls were in bed Dad was going to carry it out downstairs.

Debbie's heart pounded with excitement.
This was an opportunity she was not going to miss!
Carefully she turned the handle on her bedroom door and slowly eased it open, praying Dad would  not her .

On hands and knees she stealthily crept to the top of the stairs and peered through the railings.
She gasped at the sight.

Mom was hoisting up  her long evening gown as Dad sat impatiently on the sofa with the hairbrush.
Mom looked ruefully at him and he signalled her to him with a pat of his lap.

Even under her gown ,  Mom looked amazing in black panties , garter belt , stockings and heels.
She took a moment to rub her scantily clad cheeks before draping herself over Dad's lap.
"Please Honey. ..not too hard ...the girls will hear." She pleaded.
"A spanking is a spanking honey!"Dad replied .

The tiny panties meant his Mom's bottom cheeks were fully exposed so , teasingly Dad caressed Mom's bottom with the back of the brush making her cheeks  tense and jiggle just a bit.
Then he began. 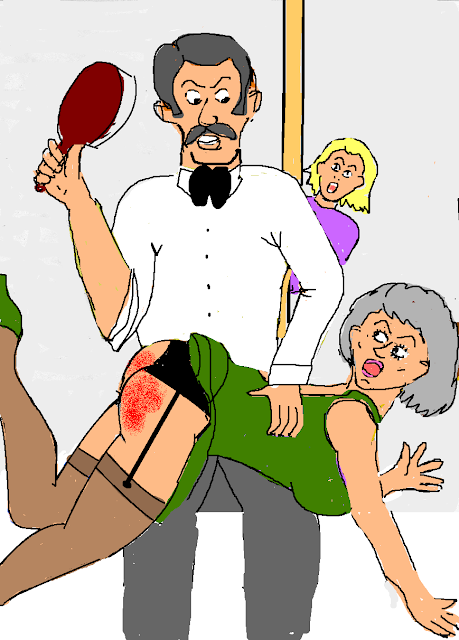 Debbie looked on in awe as Dad snapped the back of the brush against Mom's jiggling cheeks again and again.
Needless to say , the racket awoke Debbie's  two sisters who joined her to watch the proceedings.
Mom kicked her legs and  wailed loudly as Dad transformed her lily white cheeks to a blazing red.

Then when Mom's bottom was sufficiently  chastened to Dad's satisfaction he helped her up and set her on his lap.
They embraced and she kissed him passionately.
For a moment Debbie thought her parents might make out right there in the sofa , but instead Dad scooped Mom up into his arms to carry her upstairs so the girls made a hasty retreat.

The next morning, Mom was her usually perky self and studied the girls as they sat at the breakfast table looking very guilty.
"So did you young ladies enjoy the show last night?" She scolded .
Guilt on the girls' faces was evident.
Mom rubbed the seat of her slacks and winced.
"I guess it's good for you girls to see what happens when a naughty wife drinks too much and embarrasses her husband in front of important clients. Dad could have lost that account because of me so I got what I deserved!" She explained to the astonished girls.

Mom rubbed her bottom again.
"Don't tell Dad , but personally I thought I got off easy.... he should have given me a taste of his belt as well!"
She giggled and produced that pillow again , placing it on her seat.

Mom made the girls laugh again by making a big scene of sitting down.
"My backside is hot enough to cook breakfast on !" Mom quipped with an exaggerated grimace.
Dad was sporting a satisfied smile when he joined them at the table , "It's your own fault Irene...I don't think there's a grown woman who gets spanked more than you do!" he quipped to everyone's surprise,"....and by the way , there's still time to give that naughty bottom of yours a dose of my belt before I go to work !" He added.