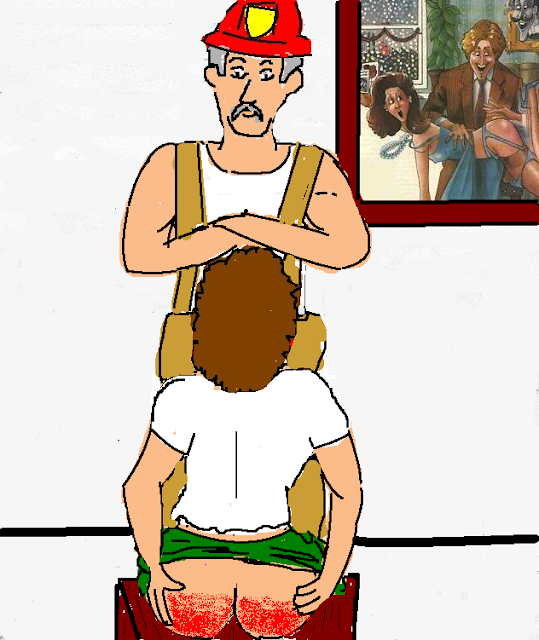 The wailing sirens of the emergency vehicles startled Janet and Gerry pulled over to let them pass.
“Looks like they’re heading out towards Katie’s place Gerry….” She said with a hint of concern.

Sure enough , as neared her younger sister’s house a host of flashing lights lit up the area.
As they progressed further , an emergency team were busy closing off Katie’s street.
“I’m sorry Sir….you can’t go any further …..we have a fire at number 47….” The burley fireman told Gerry.

“47! That’s my sister’s house……please let us through….” Janet wailed in distress.
“Please calm down Ma’am….your sister is fine…..the Chief has just downgraded it from a code 3 to code 1……the guys will just need to finish off to make things safe then you can proceed…” the Fireman reassured her.

Even so , the short wait seemed to take forever before the emergency truck manouevered to leave.
“No injuries Ma’am…your sister’s fine ….but I wouldn’t want to be in her shoes once the Chief arrives!”the Fireman said with a chuckle.
Just then the red SUV driven by Fire Chief Stu Munroe pulled up beside them.
“I’ll escort you over …..follow me Gerry.” Stu said looking very serious.

“What happened Stu?” Janet asked.
Stu rolled his eyes.“Your crazy sister was cooking lunch for us and started a grease fire in an old pot…..I guess it’s been a while since she’s tried her hand at cooking!”
Janet sighed with relief, “Cooking is not one of my sister’s strong points Stu…”

Gerry parked behind Stu and spied  an embarrassed Katie peeking out the window.
“I’m going to have to give Katie a good talking to about fire safety and I expect she won't like it !” Stu warned.
Janet grinned impishly , “I suggest you emphasize your point ........with the hairbrush.......she deserves it for causing such a fuss!" she offered enthusiastically.

Putting a hand to his square chin , Stu pondered Janet's suggested.
Katie had blistered his behind for much less , and the picture in his mind of Katie's shapely bare bottom lying over his lap was indeed enticing.

His decision was made  easier when a sheepish Katie appeared.
Stu and Katie had made arrangements for a romantic rendezvous so she was dressed appropriately in an outfit that resembled a naughty schoolgirl.
A tight-fitting white blouse , green mini skirt and white bobby socks.
Stu felt his erection stir at the mere sight of her but managed to stick to business- for the moment. 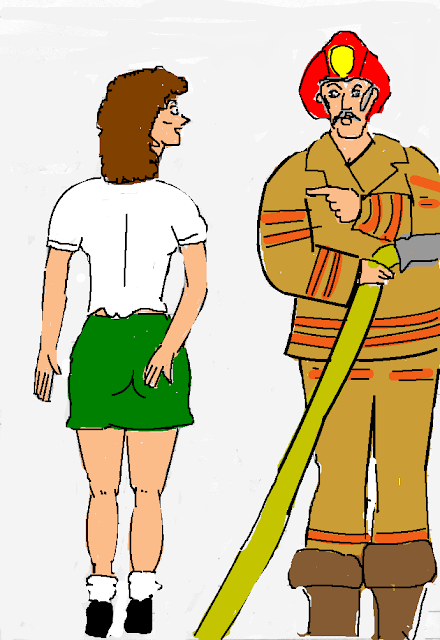 Katie shrugged sheepishly at Stu.
"I guess i ruined our little fantasy rendezvouz?"
Janet elbowed Gerry , "The schoolgirl and the Fireman! We need to try that one Gerry....", she tittered.
"Well by the look on Stu's face it certainly looks like things are going to heat up!" Gerry quipped back.

It had ben ages since Janet had witnessed her strong-willed sister being taken in hand , but she knew Katie well enough that she would try to weasel her way out of the situation as she had done so many times before.
Stu's resolve was about to be tested.
Would he be man enough to give her sister the comeuppance she so dearly deserved.

She was not disappointed.
Stu did not tolerate carelessness when it came to fire safety and his body language made it clear he meant business.
Purposefully , he marched over to to Katie and stood menacingly with hands on hips.
Taking full advantage of her feminine charms and schoolgirl garb , Katie pouted and bit her lip seductively.
"If you forgive me I'll make it up yo you honey...." she purred in a little girl voice.
Janet rolled her eyes at her sister's tired routine.

However , Stu's response was to take hold of Katie's waist and abruptly hoist her , fireman style , over his shoulder.
"What are you doing? Put me down this instant you big oaf!" Katie shrieked , kicking her legs and pounding her fists against the Fire chief's broad back.
'SMACK!' "OOOW!"
This time , Stu's response was to deliver a hard , stinging whack to Katie's scantily clad posterior.
All her kicking had hoisted her short skirt up to her waist to expose a very brief pair of white panties. 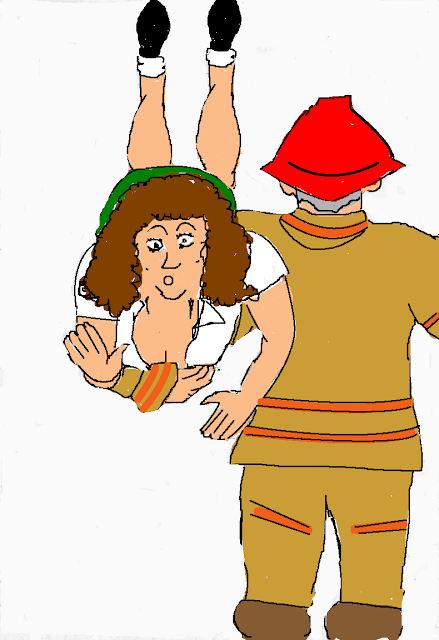 Turning to Janet and Gerry , he winked , "If you don't mind , I need a private moment upstairs with Katie. You can help clean up the mess until we get back...."
Katie's protests , kicking , and screaming continued all the way upstairs.
"You'll pay for this Stu....so help me you'll pay!" she threatened hollowly.

The bedroom door closed and Janet stood mesmerized at the foot of the stairs.
'SMACK!' "OUCH! WHAT WAS THAT FOR?" Janet yelled when her husband's palm connected with the seat of her tight jeans.
"There's lots more where that came from if you don't help me clean this place up..."he warned.
"Promises , promises...." Janet purred , rubbing her bottom.

From the commotion upstairs , it was clear that the feisty Katie was not about to accept her fate without a fight.
The sound of a vase smashing against the wall was soon followed by the crash of another projectile .
"Sounds like Stu has his hands full!" Janet quipped.

Upstairs , Katie had retreated behind her dressing table as Stu pondered his next move.
Truculent Katie wagged a finger at her pursuer.
"Now you listen to me mister....that fire was a complete accident...it was not my fault..." she reasoned.
Her flippant attitude only served to fuel Stu's rage.

Seizing his opportunity , he reached forward and grabbed both of Katie's wrists.
"You bastard!" Katie spat , frantically trying to free herself.
Stu pulled until his stubborn girlfriend was spreadeagled on the table , her skimpy undies riding up to reveal more of her glorious twin globes.
Stu thought about keeping the spirited Katie conveniently bent over the table for her imminent bottom warming  but reconsidered.
What this little minx needed was to be tamed with a good , old-fashioned , over the knee , bare-bottom spanking.
She sure knew how to dish it out - but now she was going to get it! 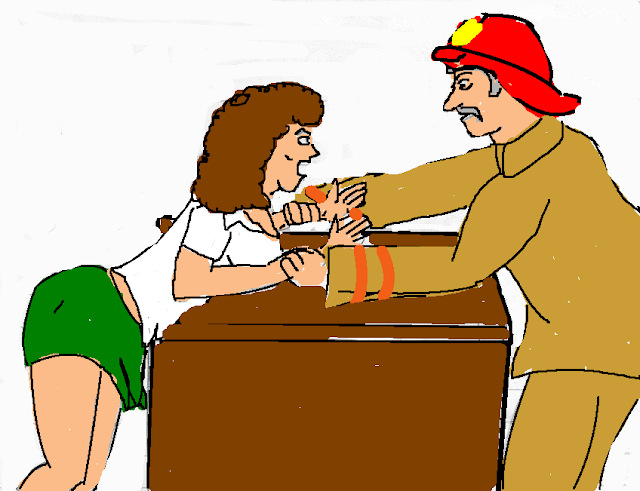 Gerry sighed and snapped his fingers at his distracted wife who was still straining to listen to the proceedings upstairs.
His wife waved him away haughtily , "BE QUITE WILL YOU!" she snapped.
As soon as the words had left her mouth she regretted it.
The familiar look on her husband's face and the wooden spatula in his hand confirmed her fate.
"Now wait just a minute Gerry....I didn't mean that....I take it back...", she stammered , backing away from her advancing husband.

Upstairs , Katie , finally tiring from all her struggling , lay face down over her new boyfriend's lap for the first time.
Stu's confidence was growing by the minute as he prepared for the exertions to come.
Despite her indignant protests , Katie was trembling with anticipation for her first spanking in years.
Her entire body tensed when Stu's rough hands slid inside the waistband of her panties and he slowly edged them down .
They both felt the moisture between her legs as she wiggled her bottom seductively.
Stu's erection was apparent even through his thick fireproof pants. 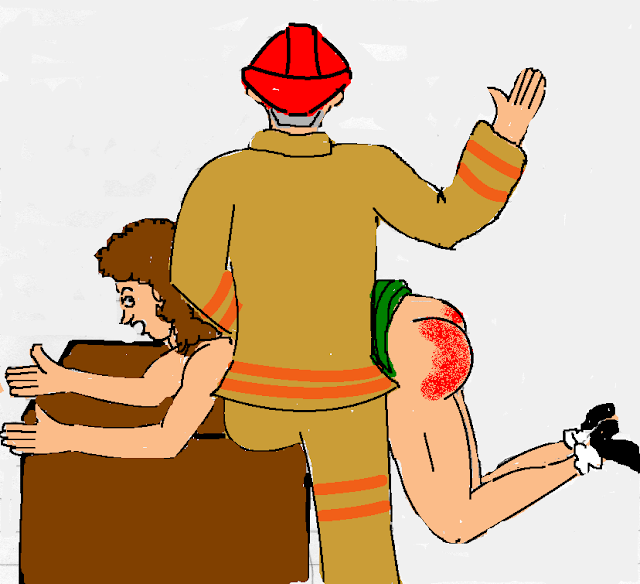 He took a moment to drink in the sight of his new girlfriend's voluptuous bare bottom.
It looked even more amazing as she lay in this position and a feeling of power surged through his veins.
Katie cocked her head at him , "Well are you gonna spank me or not?" she challenged.
Stu grinned and gently patted the silky , lily-white skin of her twin globes.
"Oh I'm gonna spank you so good that cute little tush of yours will be redder than my truck.....but first I need to explain WHY you are getting a spanking...."
Katie let out an exaggerated sigh , "Aw Stu baby....not a lecture.....OW! OOOW!"
She was silenced by a flurry of sharp spanks to her jiggling cheeks.
"Did you know that careless home cooking is the main cause of fires in the home?" he began.

Downstairs in the kitchen , things were heating up also.
Janet was draped over Gerry's lap and he was struggling to peel her skin tight jeans over the curves of her hips.
"Ouch! Careful honey....that pinches...." she complained , disguising a grin.
"OUCH!"
Gerry delivered a hearty slap to the seat of her jeans.
"I don't know how you squeezed into these things , but it will be a lot harder squeezing back into them again after I've blistered your behind missie!"
With a final tug he was able to yank the jeans down to Janet's knees , exposing her quite magnificent rear quarters framed in a pair of black lace panties.
They offered little protection but Gerry downed them as well revealing his wife's bare bottom in all its glory.

Janet's cheeks clenched when Gerry tapped the wooden spatula against them.
Just as he raised his arm to begin , the sound of Stu's palm soundly spanking Katie's bare bottom resounded from upstairs.
Gerry smiled and began snapping the spatula against his wife's cheeks to create the "Two Sister Symphony"

Later , Katie chuckled ,watching her big sister wriggle her hips in an attempt to ease her sore and swollen bottom back into her jeans.
"Dammit! These jeans feel like they're two sizes smaller after a spanking!" she grimaced.
Stu nodded approvingly at Gerry, "Make sure you keep that spatula handy ....I've a feeling I'll need it quite a lot if I'm to keep this little filly in line!" he said , enveloping Katie in a big bear hug.
Katie flipped up her short skirt to display a flaming red bottom with visible prints of big Stu's punishing palm.
"I doubt if you'll need it dear....your palm is a deadly weapon in itself." she cooed , giving her cheeks a rub.

Gerry surveyed the kitchen , "Well the kitchen looks better but there's no way we can cook in here yet....how about we go to O'Reilly's for lunch?....my treat?"
Janet let out a groan when she was finally able to zip up her jeans.
"As long as Katie and I can bring pillows." she laughed.