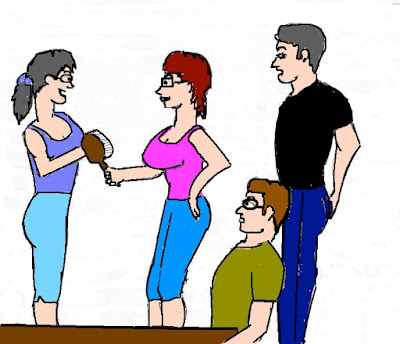 Sally and Ian had only been married for three years but her new husband’s decline from the man of her dreams into a selfish , obstinate slob did not escape her attention.

More and more of Ian’s time was spent on golfing or lying on the sofa for an entire afternoon , eating chips and swilling beer while watching sports on television.
He began neglecting his share of the household chores , and was oblivious to the fact Sally's workload was overloaded.
Sounds familiar? Then keep reading .

One Saturday morning when Ian was golfing with his buddies , Sally visited her good friend Susan who she hadn’t seen for a few years.
The first thing Sally noticed was that Susan’s husband Dave , a good friend of Ian’s ,  was busy doing the vacuuming instead of golfing .
“He knows what his chores are ....and if they aren’t finished he can’t golf.....simple as that.” Her friend told her.

Sally was impressed and asked Susan what her secret was.
Susan took Sally to the bedroom and pointed to a wooden hairbrush sitting prominently on her dresser.
“I call this my husband tamer….if Dave breaks the rules he gets a good spanking with it to remind him what a jerk he’s been.Believe me he remembers it each time he sits down for a quite while after.Just the sight of it sitting there makes him shape up!” She announced proudly.

Sally was rendered momentarily speechless at Susan’s revelation , but after spending the rest of the afternoon hearing more about Susan’s approach , she decided to stop on the way home to pick up a sturdy hairbrush of her own.

Ian arrived home from his game and as usual , dumped his gear and clothes all over the floor .
When he emerged from the shower Sally was waiting for him , hairbrush in hand.
Denying him a towel to dry off , he was forced to stand there shivering while Sally gave him a long lecture on his behavior and how things were about to change.
Ian offered no defense and moments later found himself draped face down over his wife’s lap receiving the tanning of his life.
Sally felt a sense of release and empowerment and really vented her frustration on Ian’s rump with the brush.

Afterwards , a thoroughly repentant and apologetic Ian took Sally out to dinner for the first time in months and began acting like the man she married with little touches such as opening doors for her and pulling out chairs for her to sit.
Sitting for Ian was a different story and his run-in with his wife's hairbrush had him squirming and shifting in his seat all evening.
The spanking ignited passion in both of them and that night they enjoyed their steamiest love-making session in ages.

Following Susan’s advice , Sally and Ian sat down together and agreed on a set of rules. If Ian broke the rules he would be spanked – long and hard.
Susan was right.
The mere sight of the hairbrush sitting on Sally’s dresser prompted an immediate improvement in Ian’s behavior , and it wasn’t long before it was called into action again when Ian left the bathroom in disarray .
It was a relatively minor offence , but remembering Susan’s instruction to be consistent , Sally scorched her husband’s backside with the same intensity as before .
The result was a sparkling clean bathroom followed by a torrid love-making session.

Things improved so much that Ian even preferred a golf foursome with Sally and their friends Susan and Dave to golfing with his friends.
It gave the two young wives a chance to chat and compare notes.
“Nice swing!” Ian complimented as Susan teed off.
Susan winked and replied “You should see me swing a hairbrush!”
Ian and Dave blushed ,instinctively putting palms to the seat of their pants in unison while Sally chuckled.
Sally’s drive was just as sweet as Susan’s and when Dave complimented her in the same way, Sally chose to up the ante.
“Yea….all that practice I’ve had swinging that hairbrush has really helped my power…hasn’t it darling?” she said firing an impish grin at Ian.
It was Susan’s turn to laugh this time as Ian coughed nervously and Dave tried to look away.

Throughout the game , the ladies bantered and competed with innuendoes and subtle comments about spanking and hairbrushes much to the chagrin of their husbands.
It certainly affected their men's game , and by the 9th hole it was the ladies who were carrying the game for their partners.
Susan studied the score card and her face lit up with a mischievious grin.
“How about we go girls versus guys for the last 9 holes?” she suggested.
Ian and Dave looked at each other and raised their eyebrows at the challenge.
“You girls are having a great game but Dave and I are just warming up ….” Ian replied.
Sally simply could not resist responding to her husband’s opening.
“You know I don’t give you warm-ups Ian!” she chirped to loud applause from Susan.
“To make it interesting how about a little wager guys?
If you win we’ll give you both a kind of ‘get out of jail free card’ you can use to get out of your next date with the hairbrush…..If we win you guys get a well-deserved bare bottom spanking!
Our house is only 5 minutes away and I have an extra hairbrush I can lend you Sally.” Susan announced.

If the constant hints about spanking weren’t enough , the cat was really out of the bag now.
Ian and Dave hesitated before boldly accepting.
“There’s no way you guys will win so bring it on!” Dave declared confidently.
At the 18th hole  it was a much more subdued Dave as he watched Sally sink her final putt to tie the match.
Looking confident and smug , Susan carefully eyed her potential match winning putt.
It was a difficult one for sure but Ian was still nervous enough to ask about the wager if they were tied.
“There won’t be a tie Ian….watch this.” Susan responded.
Ian and Dave sweated bullets as their wives milked the moment for all it was worth.
“Its too bad you guys will be sitting on the sorest backsides in town when you take us out for that expensive dinner tonight!” Sally teased.
Susan laughed as she lined up her putt.
“Yea ….I’ll give you a demonstration on how to really blister Ian’s ass!”
Susan’s putter made contact with the ball and it seemed to take forever to ease toward the hole , slowing considerably as it approached and the guys breathed sighs of relief as it nestled precariously on the edge….before plopping into the hole.

Sally and Susan jumped for joy as their husbands hung their heads.
Not only had they lost at golf to their wives but they earned themselves a sound spanking into the bargain.
“Lets hit the showers Sally.
We’ll have our drinks at home and then you guys will pay….boy will you pay!” Susan cackled.