I was saving this one until the blog hit the historic 300,000 visits as it has something in it for both F/M and M/F tastes. Hope you enjoy and thanks for visiting.....

Sylvia decided to take her dog Titus on her run before going to dinner with one of Dan's work colleagues and his wife.
For the first mile or so Titus ran well but was soon dragging Sylvia back as he insisted in pausing to sniff every tree or post on the route.
Even though Dan had warned her that there was a new , over-zealous by-law officer in the neighbourhood  , Sylvia decided to let Titus off the leash .

The trail was quiet and anyway , Sylvia was quite sure the notorious officer would have gone home already.
As she neared home , Sylvia was close to a personal best and entirely focused on her run- until a large Tomcat ran in front of her.
it darted into the bushes and Sylvia hoped Titus had not seen it- but she was wrong!
Titus bounded after the cat , ignoring his owner's commands to stop and disappeared into the bush. 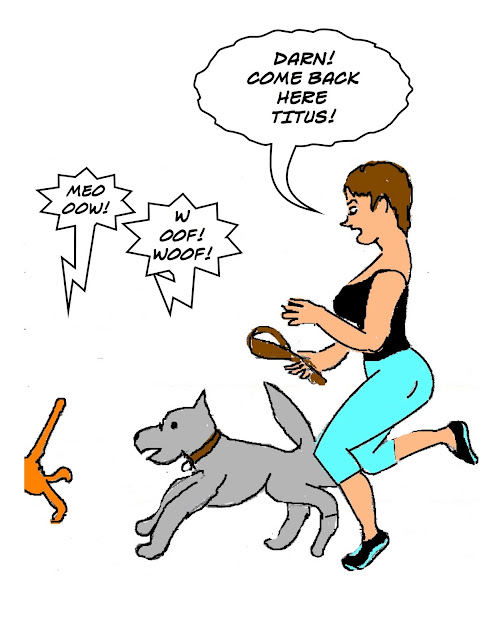 Sylvia spent a good 30 minutes searching the bushes , knocking on doors and peering over fences to find Titus but to no avail.
'Perhaps he had ran home' , she thought to herself.
If he had , she knew she would be in trouble if Dan had found her , but she was running out of options.

By-law Officer Yvette Symes patted Titus on the head and lead him up to the address on his tag.
She wondered how people could be so irresponsible to let a dog run loose like that.
When Dan answered the door , he was a;ready worried about Sylvia who was taking way to long with her run.
He was pleased to see Titus but even more worried about Sylvia when he saw the By-law officer.
Yvette re-assured Steve that she had seen a lady in blue tights walking home and to expect he in a few minutes.
"Let's wait for her then shall we Officer?" he asked.
Sylvia concealed a grin , "This should be interesting..." she mused. 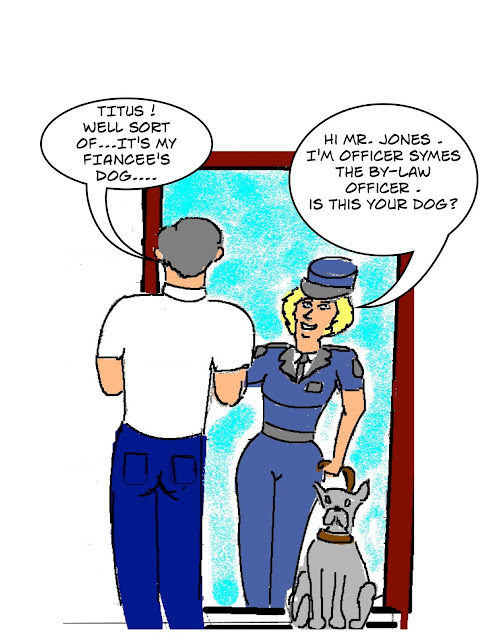 Sylvia was overjoyed when an excited Titus greeted her excitedly but was less happy about the welcoming committee of Dan and Sylvia.
Yvette proceeded to give Sylvia a long lecture on the leash law before issuing a ticket , but Sylvia was more worried about her Fiancee's silent fuming and icy glare. 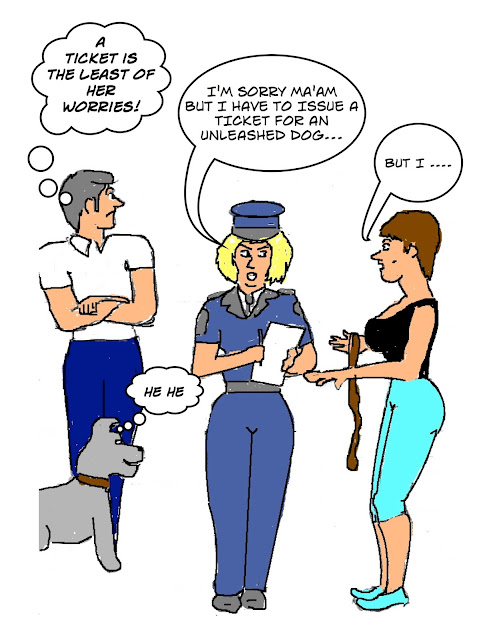 As soon as Yvette left , Sylvia went right into her explanation she had rehearsed on the dreaded walk home.
Yvette paused at the door on pretending to finish paperwork but her ears strained to hear the couple arguing inside.
"No Dan....don't you dare....I.....EEEEK!"
Out of the side of her eye Yvette could see the man haul the woman by the hand out of the room.
Yvette chuckled and waited until she heard...'WHACK!' 'WHACK!' 'WHACK!' accompanied by the  woman's frenzied cries.
Yvette peered into the nearby window and gasped excitedly at the sight.
"He's giving her a good spanking.....bare bottom too!" she thought. 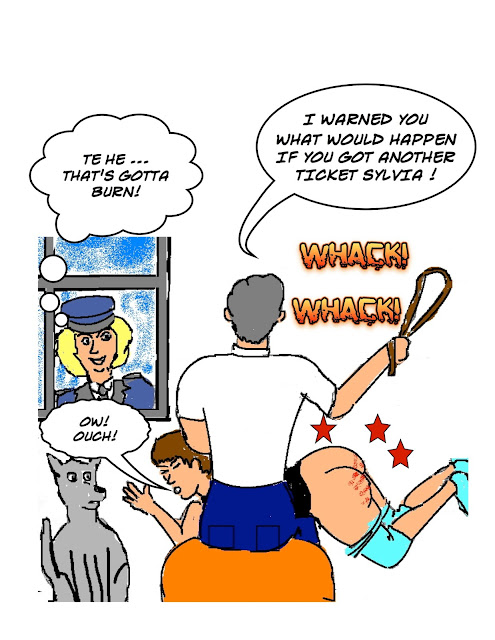 Yvette lingered , clearly enjoying watching the woman's shapely cheeks jiggle and redden as the leather dog leash snapped against them again and again.
She was transfixed on the scene until her pager buzzed.
It was her colleague Sam.
"Hi Yvette. Are you still near the Jones place with that dog ticket?" he asked.
Yvette waited until Dan had delivered a series of whacks before responding.
"Yes I am , why?"
"Well it's almost 6pm and I want to go home but there is are a bunch of outstanding parking violations for a 'Dan Jones' and I need to log in a warning. Can you do it for me....otherwise I'll be late?"
"With pleasure Sam." a grinning Yvette replied. 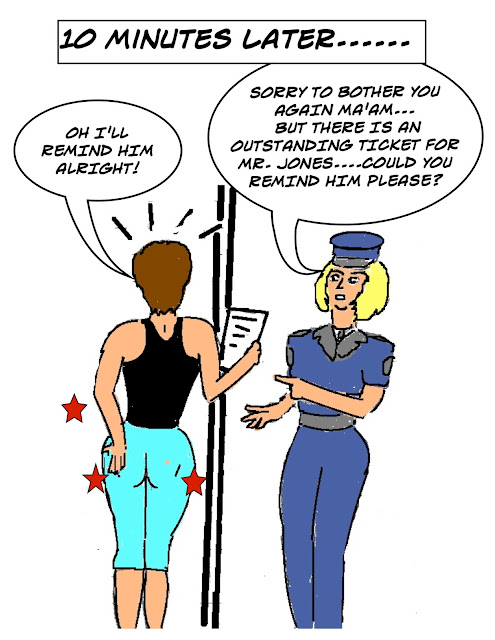 Yvette went back to her van to look up the tickets issued to Dan before returning to the door.
"This should be interesting...." she chuckled.
At the 3rd ring a still grimacing Sylvia opened the door.
A broad smile appeared on her face when Yvette presented her Fiancee's tickets.
She rubbed her sore bottom as she studied them carefully.
"I need to give a formal warning so if he could just sign a copy that they were delivered..." Yvette asked.

"Dan! Come here please!" Sylvia yelled.
Moments  Dan arrived and was immediately flustered when he saw Yvette.
"You need to sign that this is your last warning for these unpaid tickets!" Sylvia scolded , waving the papers in his face.
Dan's face flushed.
"Oh sorry...I forgot about those.." he said , scribbling on the paper and handing it to Yvette.
Sylvia was standing with arms folded looking very determined.
"Well I'm going to give you a little reminder about them before we leave...." she said.

Yvette felt a surge of excitement pulse through her veins when she saw Dan instinctively rub the seat of his pants and babble an excuse.
Once again she paused at the door to hear the next exchange.
The man stammered some more excuses and apologies before the woman declared , "Pants down and get over that sofa mister! Just be thankful my bottom is too sore to take you over my knee for a dose of my hairbrush too!" 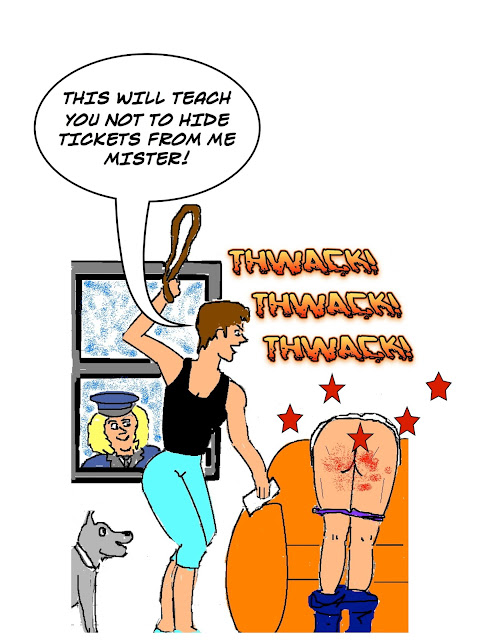 Yvette could hear the sound of that same leather strap against bare skin....this time applied to the man's bare behind as he bent over the sofa.
The standing position gave the woman a full swing and follow through and she really laid the leather on her husband's muscular behind.
The strapping went on for a good 10 minutes before Yvette realised the time.
"SHIT.....Mike's invited guests for dinner tonight!" she gasped , her heart pounding. 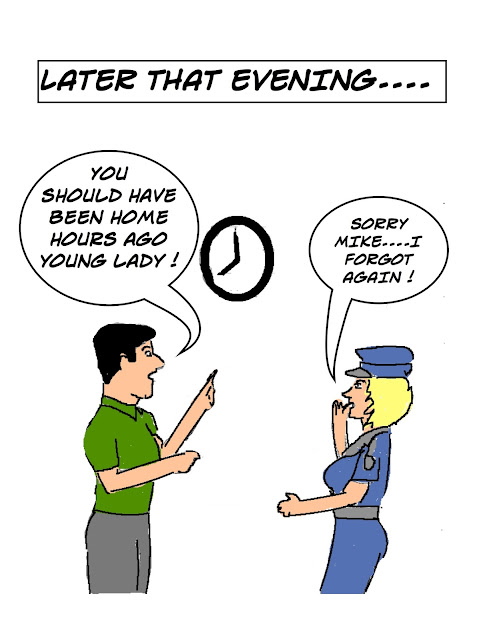 Mike had warned Yvette so many times about her tardiness and inconsideration so she knew she would have some explaining to do when she got home.
She was right.
Mike was furious and in no mood for any excuses.
In his hand was the big leather strap he kept for serious offences.
"AH NO MIKE....PLEEASE not the strap....I won't be able to sit for dinner.....EEEEEK!" Yvette screeched when Mike took her by the ear and let her to the big chair.

Yvette's lecture and scolding continued while Mike placed her over his knee , undid her pants and yanked them down.
The belt cracked against her bare backside again and again until it was a blazing red.
She performed a lengthy spanking dance afterwards before pouting as she studied her welted behind.
"Oh Mike ...my poor bottom....how will I sit for dinner?" she whined.
"Get a pillow....now go get changed ....our guest will be here soon." he told her unsympathetically. 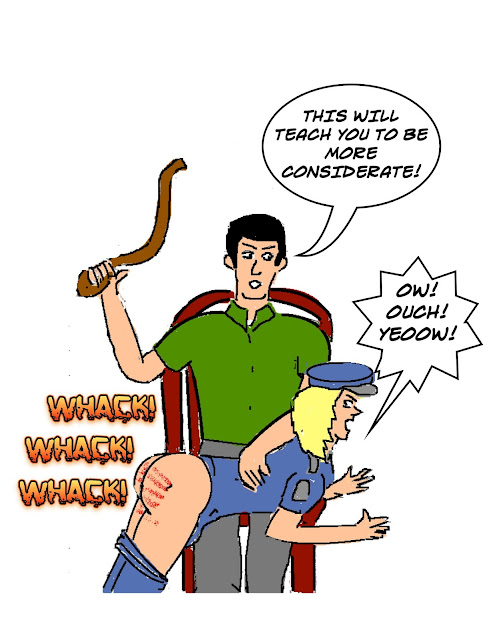 Mike had a devilish grin on his face when the doorbell rang and Yvette found out why when he brought their guests into the room .
His new boss and his fiancee were Dan and Sylvia , the couple she had ticketed earlier that evening.
Dan and Sylvia chuckled as they figured the ticketing officer might be Sylvia.
"Mike told me you were the new By-law Officer and to watch out for you as you were very strict!" Dan explained. 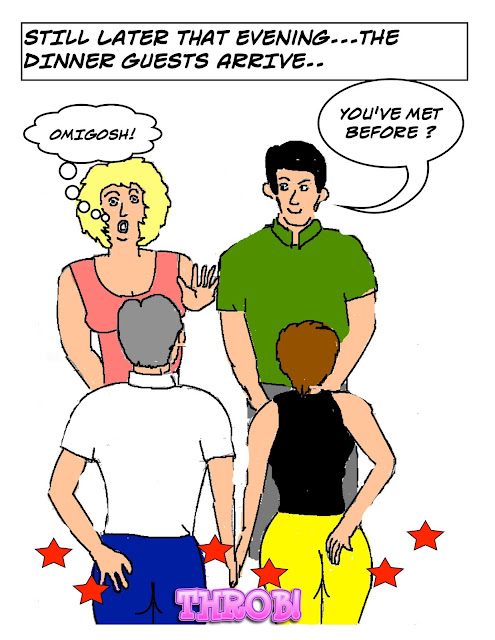 Yvette bristled and glared at her gloating husband.
"Oh did he now? He is right though...I am strict...VERY STRICT!"
Mike yelped when Yvette yanked his ear.
"Excuse us for a moment....You are about to find out just how strict I am.....aren't they darling?" she seethed , taking a large hairbrush from the drawer.
Mike looked genuinely worried as his wife led  him from the room.

Sylvia and Dan listened with amusement to the sound of the hairbrush being applied to Mike's bare bottom down the hall.
"I think I'd rather have the strap!" Dan cringed. 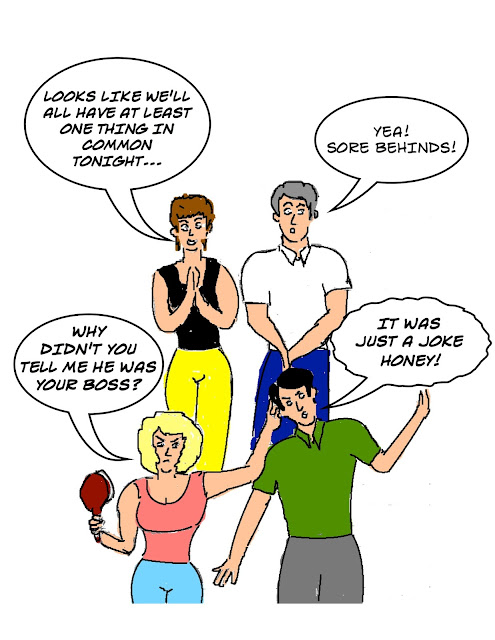 A few minutes later their hosts returned, Yvette looking contented and Mike not looking as smug.
He walked stiffly to the dining room table and it was only then that the guests noticed the pillows placed thoughtfully on their seats. 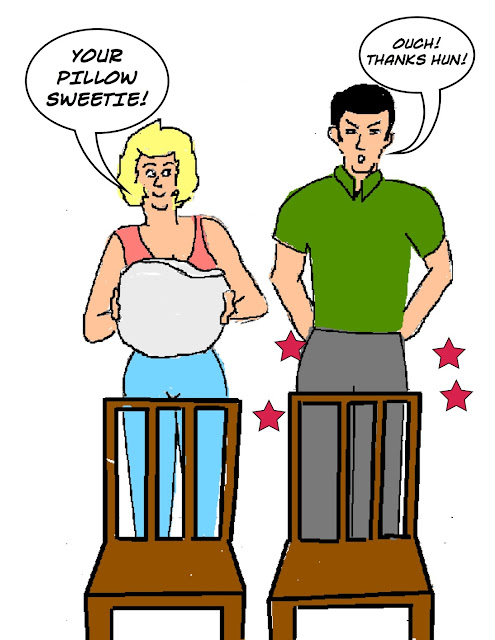