Those whale tails really enhance the female bottom so beautifully I just couldn't leave the subject without posting another story - this time with that delectably displayed female bottom on the receiving end. Dana's feeling pretty pleased with herself but her husband Simon doesn't find her mode of dress to his liking...... 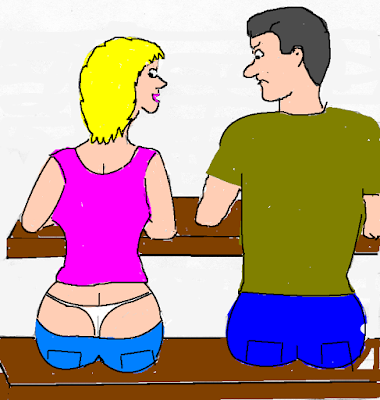 Simon Blackwell drank in the sight of his wife Dana as she sat at the picnic table in their back yard.
Her low cut jeans and tiny white lace thong displayed most of her behind in a classic whale tail.
His gaze was still affixed to Dana's shapely appendage when he sat beside her.
Noticing her husband's reaction , Dana grinned impishly.
"Quite the sight isn't it honey?" she asked proudly.


Her husband raised a brow at her , "It's very cute dear but not the proper attire for a family barbeque ....why don't you go change before our guests arrive.?" he suggested ,  with a tone more like an order than a request.


His feisty wife bristled at his tone , "I'll do no such thing! ",she responded indignantly.
Simon fought to control his anger.
There was no way he was going to fall into the trap of losing his temper , swearing and getting himself in trouble instead of his wife.
Dana had tried the ploy before,  successfully turning the tables and earning her husband a sound whacking with the paddle - but not this time !


"Honey it looks great on you , but I'd rather you didn't have most of your bare ass on display for all our guests to see." he replied calmly.
Furious at her husband's new-found calmness , Dana went into full outrage mode ....standing up , hands on hips and stomping her foot for emphasis.
"You can't tell me what to wear so why don't you get back to burning our food !" she yelled.


Simon stood up also , towering over his petite spouse.
"Dana you're behaving like a brat now so be careful...I still have time to take you inside and deal with you ." he warned.
Dana looked up at him defiantly. "OH YEA?" she challenged.


Before she could react , Simon had scooped her up and tossed her over his shoulder like a sack of potatoes.
"Put me down you ass-hole!", she hollered , pounding her fists futilely against Simon's broad back.
She was rewarded with a sound smack to the seat of her partially covered bottom which really stung.
"OW!", she squealed.


Simon carried her indoors and dumped her unceremoniously on the bed.
Athletically, Dana bounced up and picking up the closest thing to her , an alarm clock , threw it at Simon.
Simon paused for a second as the clock whistled past his ear and hit the wall.
Opening her dresser drawer he looked determinedly at his wife.
"OK you asked for it!" he smirked and took out the hairbrush.


His wife's demeanour immediately changed.
"No Simon....please ...not the brush....I'm sorry..." she pleaded.
Simon pulled out the straight back chair from its place in the corner and seized Dana by the wrist.
"Please Simon.....that's gonna hurt too much and I won't be able to sit for the barbeque..." she whined.
Simon sat on the chair and easily flipped her over his sturdy thighs.
"You should have thought about that before you started that foul-mouthed tantrum!" he scolded.


Simon took a moment to admire the amazing sight before him.
Dana was right ....her ass sure was quite a sight !
With a single tug he yanked her jeans right down below her knees.
The tiny thong would offer her no protection from what was to come but he peeled those down anyway.
Spankings were always bare-bottomed in the Blackwell household !
"OOOOH! I'LL GET YOU FOR THIS SIMON!" Dana threatened , twisting to look her husband in the face. 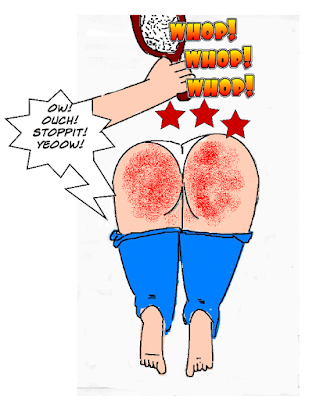 
Dana's bottom was a blazing red now , with two white 'hotspots' forming on the crest of each cheek.
By this time she was a blubbering mess , wailing incoherently , apologizing and promising to behave.
Finally Simon stopped spanking and Dana flinched when his palms caressed her flaming hot cheeks.
"I'm sorry Simon....of course I'll change into something else...." she sobbed.
"You'll do no such thing young lady...no clean yourself up and come outside before people start arriving.


It was only when Dana had restored her thong and jeans over her swollen , throbbing behind that she realised that the effects of her sound spanking would be quite visible through he skimpy attire.
Simon chuckled when she walked stiffly outside examining her rear-quarters.
"Everyone's gonna know I got spanked!" she frowned.
"Its your own fault honey." Simon replied with a smirk.
"It's not funny Simon.....my ass is on fire!" Dana retorted.
"As it should be my dear....now have a seat and enjoy your drink." he said pointing to a pillow he had placed on the picnic table beside her Margarita. 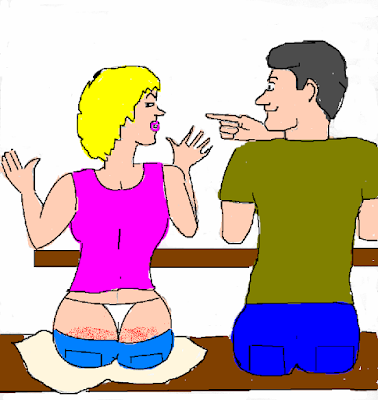