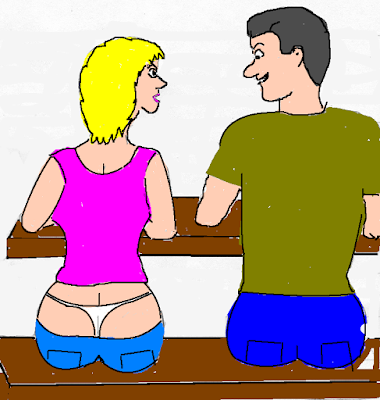 Linda almost dropped the drinks she had fetched for  her boyfriend Nick and her older sister Dana , when she spied Nick  lustily staring at Dana's rear end as they sat together at the picnic table.
"NICK!" Linda yelled , startling the pair.
Her boyfriend immediately flushed red when he realised he was caught.

"What's up Linda ?" Dana asked. She had never seen her little sister so angry.
Linda set down the drinks , out both hands on her hips and confronted Nick.
"I just saw this 'pig' ogling your butt!" she seethed, pointing an accusing finger at her flustered boyfriend.
"....b..but honey...I..."he babbled , his expression filled with guilt. 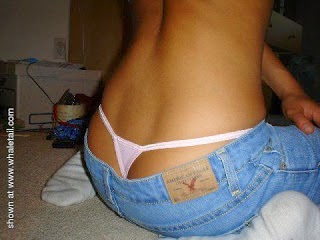 Dana giggled , "Well it is quite a sexy sight!" she quipped gazing at the view behind her.
She was proudly showing off her 'whale bone' , a white lace thong exposed over her low riding jeans which also revealed an eye-catching view of a good portion of her shapely twin globes.
"You naughty boy....whatever are we going to do with you ?" she teased , wagging a finger at Nick.

"AAAAAH!" Nick howled when Linda hauled him to his feet by his ear.
"Just wait until we get you home mister!" she scolded.
"OUCH!" Nick yelped when his girlfriend delivered a loud whack to the seat of his denims , turning the heads of the other picnickers.
"Count yourself lucky I don't put you over my knee right now and paddle your bare bottom in front of everyone!" she threatened. 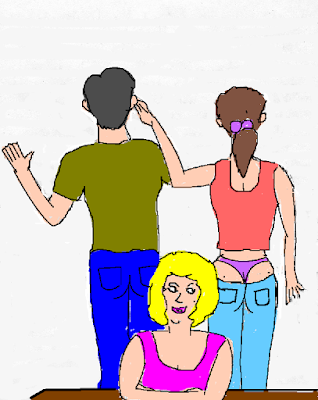 When his girlfriend released his grip , an embarrassed Nick attempted to sit down but Linda was having none of it.
"This picnic is over for you...", she began , "....there's a Walmart on the other side of the park so you can get your little tushie over there and buy yourself a nice little thong like Dana's !"
Nick looked puzzled.
"You want me to buy your sister a thong?" he asked.

The two sisters looked at each other and cackled loudly.
"The thong is for YOU silly!" Linda explained.
" I would say a ladies large should fit him nicely don't you Dana ?"
Dana posed , a wry smile playing on her face.

"Your kidding?" Nick blurted.
"You know I'm not Nick....we want to make sure the punishment fits your crime so you're going to be wearing it for the rest of the day - and when I blister your backside with my hairbrush tonight !" his girlfriend declared.
Nick's jaw dropped.
"Aw Honey....not the  brush please ..." he pleaded , looking at Dana for sympathy.
"Naughty boys get spanked so best be on your way naughty boy." Dana laughed.
The two sisters returned to their picnic , chatting and laughing heartily as they watched Nick begin his trek .

Poor Nick endured a thoroughly humiliating experience at the Walmalt store , packed with Saturday afternoon shoppers.
The amused glances of ladies as he dwelled in the lingerie section in search of the thong , the seemingly never-ending wait in the line-up clutching his purchase , the look from the young cashier and pack-boys as he paid for his large , white lace thong.

He had considered purchasing some other items so the thong did not look so conspicuous but he knew Linda would be checking his bill and may even send him back to the store if she thought he had not followed her instructions to the letter.

Back at the park , the two sisters had finished eating and giggled excitedly when they saw Nick approaching.
"You sure have that boyfriend of yours under control now Sis!" Dana said.
Linda hugged her sister , "All thanks to you Dana. I was ready to break up with him until you told me to give the 'Blackwell' system a try. It sure worked to turn him around , but he's still a work in progress I'm afraid."
Dana chuckled , "Did you see his face when you mentioned the hairbrush? You must be getting pretty good at it now."
Linda nodded , "Yes he's terrified of it ....just the sight of it makes him jump so I always keep it in plain view as you suggested!"

"Let's see if our dirty little man did as he was told shall we?" Linda said putting her hand out to receive the bag from Nick.
His face flushed red when Linda made a point of holding the thong in the air for all to see while she and her sister teased him.
"On he's gonna look cute in that Linda!" Dana said.
"Yea....and they're not going to give him much protection from my hairbrush I'm afraid!" Linda grinned

Linda handed the thong to Nick.
"OK now go put them on." she demanded.
"WHAT? HERE?" Nick asked trying to lower his voice.
Linda glared sternly at him , "I don't care where you do it but I want you wearing these for the rest of the day for being such a pervert."
Nick looked around for a private spot to change while the sisters looked on grinning with arms folded.
The park was busy but he was able to find a clutch of trees large enough for him to quickly change into the tiny thong .

He felt quite ridiculous when he returned to the girls who were thoroughly enjoying the events.
Nick had a feeling his public embarrassment was not over.
"Are you sorry Nick ?" Linda asked.
Nick's head bowed , "Yes...I'm sorry for....I'm sorry for being a dirty pervert..." he managed to say.
"Well if you really mean that you can kneel down and kiss both of our asses!" Linda demanded.
"Seriously?" Nick asked , his eyes darting around.
Linda raised a brow , "Pucker up mister!"

Adam walked behind the girls and dropped to his knees.
He could not resist drinking in the sight of the cute twin behinds , both in low ride jeans exposing bare cheeks below thong whale tails.
He pursed his lips and pressed them against Linda's left cheek and then her right.
Shuffling on his knees , he planted two kisses on Dana's luscious cheeks.
He could feel his erection straining against the thong when he rose.
Linda looked at him ,"Did I give you permission to stand ? Back on your knees....give us both a foot massage.
Nick's act did not go unnoticed by fellow picnickers nearby , some of whom applauded when he dropped to his knees again.

Nick sat in silence for the remainder of the picnic as the two sisters chatted amiably.
His bottom tingled at the thought of his fate later at home.
That awful hairbrush of Linda's hurt like heck and having to take his punishment in front of Dana would add to his humiliation.
By the time the trio returned to Linda's apartment he just wanted to get it over with.

"OK let show Dana and I what you look like in your new undies shall we ?" Linda teased.
Nick stripped and stood before the pair , his erection peeking over the tiny triangle of material.
"He seems pretty excited Linda ." Dana said studying Nick's throbbing shaft.
Linda was already tapping the big hairbrush against her palm.
"Don't worry this will soon take care of that !" she grinned.
Linda sat down on the big chair and patted her lap."Over you go mister."

Nick draped himself over his girlfriend's inviting lap.
Dana giggled at the sight of his pale , muscular backside framed by the string of the tiny thong.
"Your right sis ..that thong isn't going to give him much protection!" she laughed.

Dana sat back in the armchair and took in the show.
She was impressed by her young sister's technique and even she winced as the brush cracked hard against Nick's bare flesh.
Her kid sister had learned well.
Nick was howling from the first whack , struggling and squirming all over his girlfriend's lap.
Linda noticed his erection had disappeared already.
She picked up the pace.
'WHAP!''WHAP!''WHAP!''WHAP!''WHAP!''WHAP!'
'WHOP!'WHOP!'WHOP!'WHOP!'
"WAAAAH!" "I'M SORRY!""AAAAAAH"  "I'M REALLY SORRY!"
Nick was becoming frantic now , his howls turning to girlish squeals.

Linda paused to catch her breath and examine her handiwork.
His entire ass and upper thighs was a blazing red hue with white burn spots on both cheeks.
He would not be sitting comfortably for some time after this.
Linda looked at her sister.
"Can you fetch the leather belt hanging in my closet please Dana.I'll be just the thing to make sure he gets the point."
Dana nodded in agreement , amused at Nick's horrified reaction to the introduction of the belt.
"Please Honey....not the belt....my butt is already sore .....I said I was sorry..." he pleaded.
Linda taunted him , "Is poor little Nickie's bottom soresie worsie?"

Ironically the next phase of his punishment would be with the thin belt Nick wore to work most days so would be  a constant reminder for him.....not to mention sitting!
The belt was braided which added to it's sting and would leave braided welts on his behind for days.
Linda loved the belt because it let her really thrash his behind and address those sensitive areas like the cleft between his cheeks and the inside of his thighs.
As per the Blackwell doctrine , she would be focussing exclusively on these areas for the rest of his spanking.

Although it was offering no protection , Linda put her fingers in the waistband of Nic's thong and peeled it off.
"You're bare bottom for the rest mister....open wide!" she ordered.
Dana  raised a brow and then applauded when her sister stuffed the undies in her boyfriend's mouth.
Linda looked at her sister , "Just in case the neighbours hear....this tends to get him squealing like a banshee!" she said waving the belt.

Dana looked on in awe of her sister so thoroughly whipping poor Nick's backside.
His entire rear quarters were a real mess , similar to her husband Simon;s when she thrashed him like that.
When Linda finally finished , she guided Nick into the corner , hands on head for some quite reflection.

Out of breath , Linda sat beside Dana and admired her handiwork.
"Stop that blubbering and stay in that corner until you're ready to give Dana a proper apology!" she scolded.
"Wow Sis....you really gave it to him good this time!" Dana remarked.
Linda smiled , "He's going to be wearing the thong and the belt to work tomorrow!"
"Well his butt does look quite cute in it?" Dana observed.
"Hmmmm....maybe we should send him back to Walmart to buy some low ride jeans to show off his whale tale too ?" she mused.