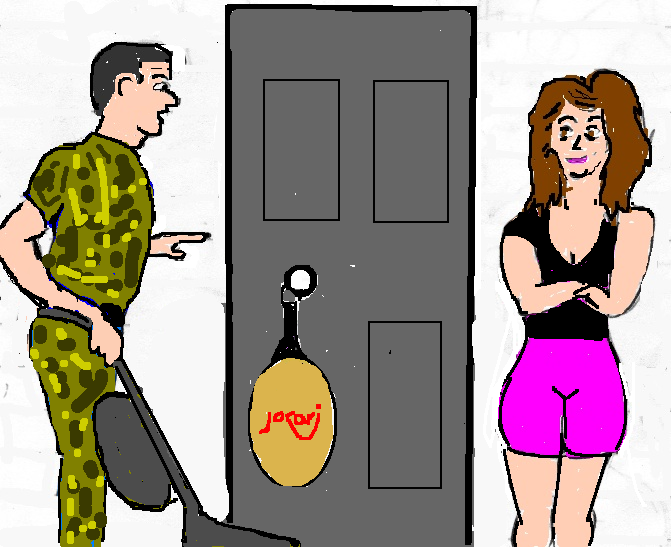 Marine Sergeant Simon Blackwell , gazed ruefully at the big Jokari paddle hanging on the closet door as pushed the vacuum cleaner around the room.
At the Army base , he was the Sergeant in charge barking out the orders to recruits , but at home things were different.

Standing behind him with arms folded  , dilligently watching his every move , was his wife Dana.
"Don't forget the corners and under the sofa honey." she reminded him.
Simon replied with a polite, "Yes Maam."
The mere sight of the big paddle hanging there was enough to keep his tone respectful.

It had been 24 hours since Dana had blistered his bare backside with it and he was still feeling the effects.
Dana knew Simon spent all day Friday's sitting at his desk preparing the week's reports and had scheduled his paddling accordingly.
She certainly enjoyed phoning him on Friday afternoon to ask how his bottom felt.
Ironically , Simon was assigning discipline duties to a recruit when Dana called which made it even more uncomfortable.
"Well Simon? I asked you a question.....or perhaps you'd like a little refresher with my cane when you get home tonight?' she warned.
Simon squirmed on his seat ....it was bad enough that his backside was tender and blistered but now he had to compliment his wife on her handiwork. 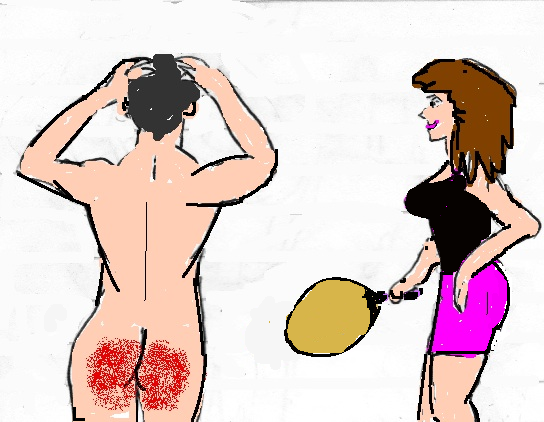 Dana sensed her husband was not alone.
"Is someone with you honey?" she asked.
"Yes Ma'am!" came the terse reply.
"Oh! Then I guess you don't want them to know that Sergeant Simon Blackwell gets his bare bottom spanked by his wife when he needs it?" she teased.
"No Ma'am I do not !"

He certainly did not want to earn a repeat dose of the Jokari before having dinner with friends later.
Dana always kept the paddle hanging in full view for a few days after his punishment as a reminder to him.
She would not hesitate to use it again if he dared to anger her.
To his relief ,  the doorbell rang.
"That will be Betty. I invited her over to watch a movie. You can bring that upstairs and then get started on cleaning the windows." she ordered.

Upstairs Dana embraced her good friend and neighbour Betty , a lanky , athletic blonde who was married to Simon's best friend and fellow Sergeant Adam.
Simon forced a smile ,bidding Betty a subdued "hello" as he walked passed with the vacuum.
"Boy do you have him well trained Dana. What's your secret?" she asked.
"Oh I have my ways.....don't I honey?" Dana replied , glancing at a blushing Simon.

While Simon went outside to tend the windows , the two girls settled down on the sofa to share a bottle of wine and watch the movie.
It didn't take long for them to empty the bottle , and Betty went to the washroom while a tipsy Dana opened another bottle .

When Betty returned she spied the Jokari hanging on the handle.
Picking it up she swung it through the air.
"I used to be very good at this you know." she mused.
The wine had relaxed Dana a bit more than normal.
"I'm very good with it too ....just ask Simon." she said.
"Oh does Simon play too?" a curious Betty asked.
" Sort of..." Dana replied impishly.

Betty's jaw dropped when  Dana proceed to describe in great detail how she kept her tough husband in line by paddling his backside with the paddle.
"Simon's Mom suggested it and  taught me everything . As soon as I started paddling his backside he became a better husband.
If you don't believe me , let me show you."' Dana  boasted , showing her friend the photos on her phone.
"WOW! Nice cute  butt.......boy is it red! You did that?" Betty asked excitedly.
Dana nodded and proudly showed her friend her collection of Simon's paddling photos.

"This one's after the senior cane. He got 20 strokes for swearing at me in front of his parents. Look at those welts...he couldn't sit for a week after that one!
The best part was making him apologize while he was bare-assed and bent over the chair waiting for me to whip his ass with the cane.
I can tell you he was one sorry boy after that and it'll be a cold day in hell when he ever does that again.
I always leave the paddle or cane hanging on the door handle as a reminder to him ."

There was an uncomfortable silence before Simon rose and began clearing the table.
Adam looked at his friend in disbelief.
"What are you doing Simon....sit down.....that's womens work!" he said loudly.
Dana looked impatiently at her protege.
"Tell me you are not going to let him away with that Betty?" she prodded.

Betty stood up , put both hands on the table and looked down at Adam.
At 5' 9" she was an inch taller than her stocky , muscular husband.
"Adam Welks you will take that comment back and apologize . Then you will help Simon with the dishes!" she said firmly.

The cockily , confident Adam was momentarily taken aback by his wife's newfound bravado.
"NO WAY?" he blurted , his face contorting in disbelief.
Betty reacted by grabbing her husband roughly by the ear and hauling him to her eye level.
She looked over at Dana.
"I'm so sorry Dana. I'm afraid Adam needs a lesson in manners which just can't wait. May I take him downstairs for a few minutes?" she asked.
"LEGGO DAMMIT BETTY! "  "THAT @^%##@ HURTS!" Adam squealed.

Dana applauded and Simon looked on in astonishment.
"You'll find the Jokari hanging in its usual place !" she giggled .
Simon looked at his wife sternly as he watched Betty guide her errant husband downstairs.
"Have you and Betty been.....?" Simon asked.
Dana grinned ,shrugging her shoulders innocently . "Maybe?"
He grinned back , "Well Adam can be a bit of a jerk sometimes...he deserves it ." 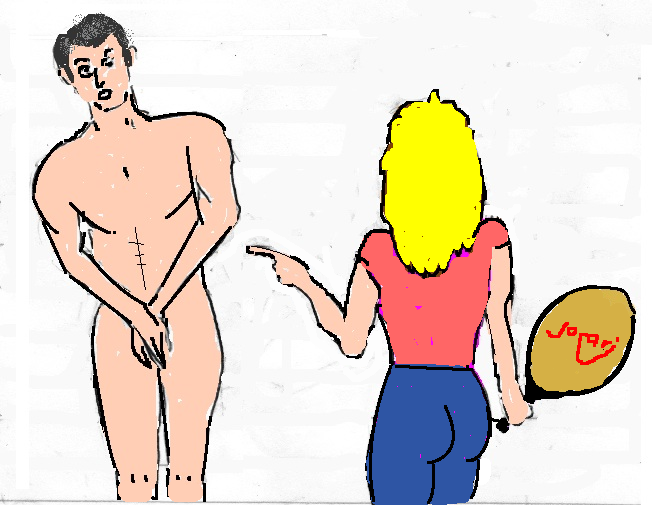 Downstairs , Betty was reveling in her new-found power and delivering quite a memorable lesson to her repenting husband .
Dana had taught her well and Betty's athletic build and natural technique added a real snap to her swing.
She had planned on giving Adam a full 50 good whacks , but after delivering whack number 30 her 'not -so-tough' husband was already wailing like a baby.
It was almost embarrassing.
'THWAAAAPPP!' 'WHOP!'"WAAAAH! PLEASE MA'AM! NO MORE! I BEG YOU! STOP....IT HURTS TOO BAD!"

Betty paused , pacing behind her man.
Adam winced when she placed a hand on his tender buttocks to inspect the damage.
His skin was raging red and roasted  from his upper thighs to the tops of his cheeks , and he was sobbing and shaking like a leaf.
Betty knew her headstrong husband was well and truly broken and seized the opportunity.
The sense of power was intoxicating.

"Are you listening carefully Adam?" she asked imperiously.
"YES MA'AM!" Adam replied obediently.
Teasingly she patted his buttocks and grinned when they clenched in anticipation.
"You know you have another 20 whacks to go ?" she reminded him.
"NO! PLEASE MA'AM....NO MORE...I've learned my lesson....I'll do anything....PLEASE NO MORE WHACKS!" he pleaded. 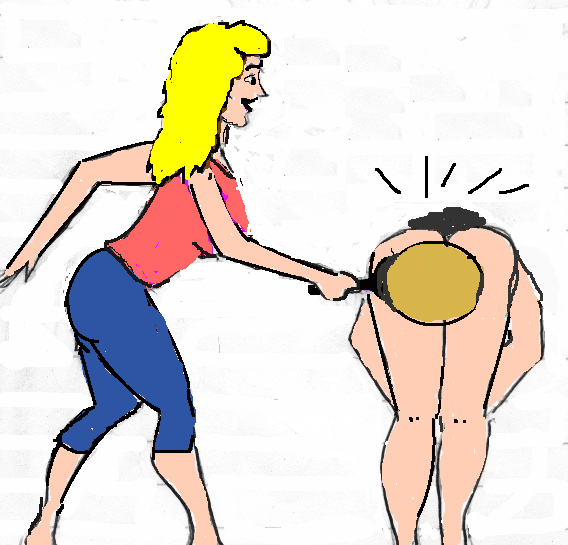 Betty smiled.
"What's up ? Can't you take the big paddle big man ?" she teased.
"OK then....I guess I'll just have to put you over my knee and spank you like a little boy then !"

Betty proceeded to announce a long list of changes to their relationship.
Adam would never again treat her disrespectfully , he would never again put her down or make inappropriate comments , he would assume a fair share of the household chores , etc. , etc........
Adam listened and agreed with each one.
Betty informed him that any poor behaviour by him would result in her administering corporal punishment.

"Are you finished Hon ?....my ass feels like its on fire....I've had enough..." Adam pleaded.
Betty giggled.
"Oh your cute little tushie certainly looks like its on fire dear , but your still getting that spanking - you may stand up." she replied.
Her husband slowly straightened up , grimacing and clutching his sore backside.
"STAND AT ATTENTION!" Betty hollered at him , pointing to a spot on the floor .
Immediately , Adam stood up straight , hands by his sides and chest out.
"YES MA'AM!"

Amusingly , Adam's penis also stood to attention with an uncontrolable erection.
"If I'd known a good paddling would have that effect on you I'd have started doing it a lot sooner!"
She wrapped a palm around his member and squeezed hard.
Her husband flinched but remained in position.
"Good boy!" Betty giggled.

Betty took the chair Adam had been bending over and sat down , patting her lap.
"Get over my knee." she ordered firmly.
Adam's jaw dropped.
"Please Betty." he pleaded.
"You're clearly not man enough to bend over and take the paddle so I'll have to put you over my knee and give you a good , old-fashioned spanking my dear husband." she told him,
"I'm gonna teach you who really wears the pants in our house!" Betty declared as her husband draped himself over her lap.
Upstairs Dana and Simon listened and waited for their guests to return.
"I thought she would have given him more swats than that." Simon observed.
Dana grinned , "Well he is a spanking version honey....but I don't think Betty's finished with him yet..."

After a couple of minutes of non-stop spanking Betty paused for a breather.
She wrapped one of her long , dancer-like legs around both of Adam's and pinned one of his arms against the small of his back.
"One thing you'd better learn my husband is that I will not tolerate any squirming around when I'm spanking you....do you understand?"
"YES MA'AM!"
"GOOD! BECAUSE I'M STARTING YOUR SPANKING OVER!" she announced.

Moments later a red-faced and sorry looking Adam was upstairs , with Betty standing behind him beaming with pride.
He addressed Dana and Simon , "I'm really sorry about my behaviour guys....I'd like to apologize".
Betty scowled and delivered a hearty slap to her husband's rump with enough force to propel him forward.
Adam looked back at his wife who prompted him by raising a brow.
"....washing dishes is NOT women's work , I'd be pleased to do them while your girls relax,"
"Apology accepted ." Dana replied with a grim.

Simon put a sympathetic arm around his buddy.
"Welcome to the club Adam......wash or dry?" he asked.