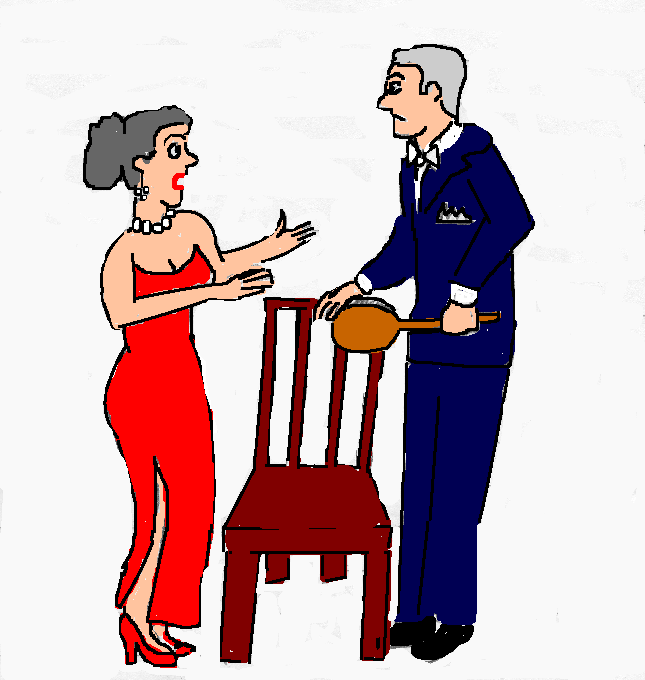 Janet Blackwell fidgeted nervously in the dining room waiting for her husband to return.
Her husband Gerry glared at her , still somewhat astonished by his wife's behaviour.
"Sorry Gerry...I guess I blew it for you huh?" she muttered quietly.

Gerry's company banquet was always a very posh and important affair and Gerry loved attending the event with his stunningly glamorous wife at his side.
Despite being well into her 50's , Janet still had the knack of turning envious male and female heads when she  swaggered imperiously into a room , strutting across the floor in her bright red dinner dress  hugging the voluptuous curves of her body.

Her long hair was styled in an up-do to show off her beautiful facial features.
Gerry made sure she would be seated next to his new boss to impress him as only Janet could do.
Janet had a knack with men , and knew how to control and take charge of them , making them melt in her presence.

Any woman who could keep the stubborn , strong-willed Gerry Blackwell in check for over 30 years had to be formidable.
It was to be quite a challenge to tame Gerry Blackwell   , but Janet was equal to the task.


They had only been dating for a few weeks in their Senior year at high school when Gerry learned that his new girlfriend was different than the rest.

She had been quick to warn him when he began showing up late for dates .
"So you would break up with me just because I'm late a few times ?" he asked.
"I didn't say I'd break up with you Gerry but there will be consequences!" came her pert reply.


Gerry found out what those consequences were a few days later when he received his first taste of his girlfriend's hairbrush on his bare backside.!
It was the first of many spankings he would receive over the years- Janet kept that very same hairbrush to this day - and still used it on her husband or any other errant backside which required discipline.

However , Janet could be just  as strong-willed and stubborn as Gerry , and was not above receiving and accepting similar discipline when she deserved it.
This evening would be one of those occasions.

Gerry had warned Janet that his new , much younger boss had an arrogant , snobby air to him.
It wasn't long before the uppity young man irritated Janet , but she remained gracious and charming for Gerry's sake.
That changed when the boss decided to let his hands wander on Janet's shapely bottom while on the dance floor !

The outraged and tempestuous Janet did not hold back ,  and the room was silenced when she publicly  scolded the man as only she could , her finger wagging as she delivered a well-deserved tongue lashing.

Gerry moved to diffuse the situation , but was aghast when his formidable wife delivered a hearty smack to the backside of his surprised boss.
Then , turning to the boss's wife she proceeded to advise her to  give him a good spanking when she got him home.
Instead of  outrage , the woman was greatly amused by the situation and seemed to welcome Janet's suggestion -  but  not enough  to help Gerry's situation.

Tempers did cool somewhat,  but an awkward tension remained until Gerry made an excuse for he and Janet they leave the party early.
"Why should we leave early because that little prick felt my ass?" Janet fumed loudly.
She soon regretted the comment when she  recognized the look Gerry was giving her and knew she was in trouble.
"We are going to have a serious talk when I get you home  young lady." he warned her.
Janet knew exactly what he meant !

Janet's nervous wait ended when Gerry returned wielding the wooden bath-brush.
It was a formidable weapon and he knew Janet hated it.
"AW! Not the big brush honey.....it hurts too much." she pleaded.
"After that little escapade my dear it's the least you deserve." Gerry replied.
Gerry took a firm grip of Janet's wrist and briskly marched her down the hall to the bedroom.
Janet continued her pleas for mercy as she stumbled along behind her husband in her red heels , but to no avail.

Once inside the bedroom, Gerry wasted no time in bringing out the straight-back chair from its corner .
The chair was there for one purpose only - spanking!
It was usually Janet sitting on the chair , brandishing the hairbrush and pointing for Gerry to lie over her lap , or  having him bend over it to receive strokes of her whippy cane or leather strap ,  but this time the tables were turned.

Gerry sat down yanking his struggling wife , face down over his lap and hoisted her expensive evening gown.
"No panties ?" Gerry exclaimed , staring at Janet's two bare globes framed with a black garter belt and stockings.
Janet looked up at him .
"I felt daring tonight." she explained impishly..
"Daring is it ? Well 'daring's' gonna get you an extra dozen whacks!" he declared.
"AWWW!" Janet sighed.

Janet loved the powerful feeling of taking a strong man over her lap to redden his bottom, but she also enjoyed the thrill of her man taking charge and giving her bottom a good hard spanking.
There was something about the anticipation , the vulnerability of having her bare bottom high in the air and her nose practically sniffing the carpet , and Gerry's hand caressing her bottom before he took the dreaded brush to her.


It had been a while since Janet had been spanked and it was clear Gerry hadn't lost his touch.
A noisy cacophony filled the room ,  the loud crack of the brush on bare skin accompanied by Janet's frantic howling and squealing.
In fact it was so noisy that it was a few minutes before either of them noticed the presence of their daughter in the room.
"Nancy!" a red-faced Janet called out , raising her head. 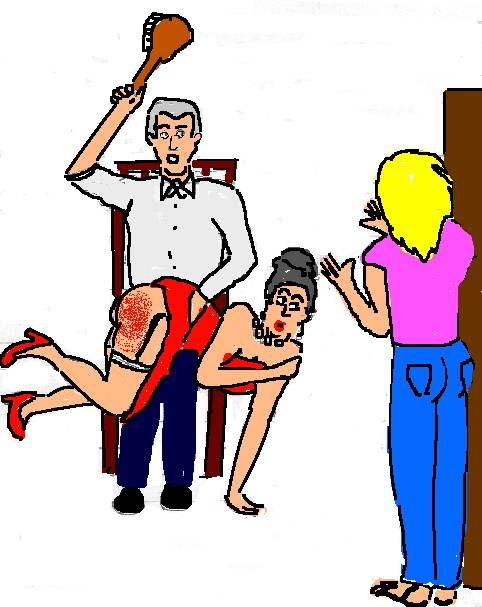 "Dad will you stop paddling Mom for a minute ? I have something important to tell you." she yelled , tears forming in her eyes.
Gerry stopped paddling his wife's sweet cheeks and looked at his daughter.
"What's up sweetie?" he asked.
Nancy took a long look at her Mother's blazing behind before replying and instinctively  put a palm to her own bottom.
She was not in the least bit surprised to be witnessing a spanking in the house , only that her Mother was on the receiving end..
Her Mom had warmed her backside many times over the years , and taught her to do the same to her new husband Jeff when he stepped out of line.


"Jeff and I had a big fight and I told him I was leaving him!" she announced.
"WHAT?" her Father's jaw dropped.
Janet struggled to pull herself up to look at her daughter  , balancing herself  with two palms on Gerry's thighs.
"You'll do no such thing young lady......let me up Gerry !" she demanded.
Her husband's response was to push his wife's head back down into position.
"You are not going anywhere until I'm finished with you.....and we are a long way from that!"

He pointed a finger at Nancy.
"You wait outside young lady....your Mother and I have unfinished business!"
Nancy turned and left the room , "Yes...sorry Dad.." she apologised.
Gerry returned his attention to Janet.
"I don't know what she's done ...but standing outside listening to a good hard spanking might make her come to her senses...."
"But Gerry I  need to.......  OOOW! OUCH!"
'WHAP!' 'WHAP!' 'WHAP!' 'WHACK!' 'WHACK!' 'WHAP!'
Janet's spanking continued with increased ferocity for the benefit of Nancy waiting outside. 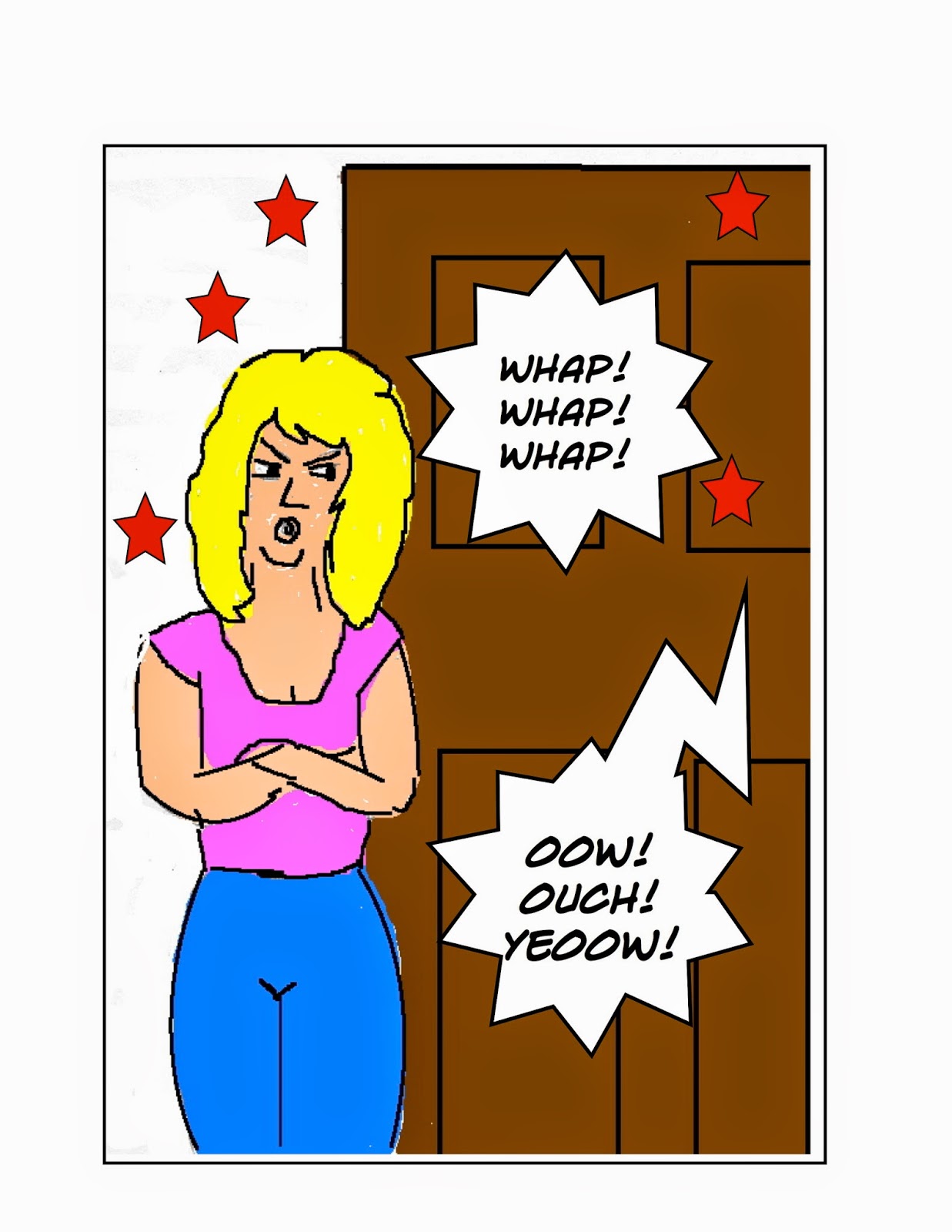 Nancy stood by the door , wincing and cringing with every whack to her Mother's posterior.
"This'll teach you a lesson how to behave in front of my boss and customers !" Gerry lectured after delivering a particularly hard whack.
"WAAAA! UHHHH! I'm so sorry Honey....I was dumb....I promise to call your Boss  on Monday to apologize!" Janet wailed.
"WOW! Mom's getting spanked for the same thing I did to Jeff!" a dumbstruck Nancy thought to herself .
It was doubtful she would get much support from her parents on this issue.


As the spanking intensified , Janet's strong will was broken and her yells of indignation and protest turned to sobs and whines.
Nancy had never heard her strong Mother speak in such subdued tones.
Just listening to the spanking had made Nancy's bottom tingle and she suddenly felt pangs of guilt.
There was a short pause and Nancy thought her Mother's paddling had finally ended , so did Janet , but....
Janet struggled to her feet and tried to restore her hoisted dress.
"Just what do you think you're doing?" Gerry asked , slapping her hand.
"OW! My spanking is finished and we need to speak to our daughter !"
Gerry sighed and pointed to the chair.
"We still have your extra whacks for going pantie-less!" he reminded her.
"AW NO Gerry....no more.... please?' Janet whined.
"Kneel on the chair and get that naughty little pantie- free bottom right out.....and I want you to count out each one !"

Finally , the door opened and a grimacing but stoic Janet beckoned Nancy to enter.
Given time to reflect , she was not as confident as when she first arrived.
"So what is all this about you leaving Jeff?" her Mother asked , dabbing the tears from her eyes and rubbing her sore bottom.

"Jeff invited his dumb boss and his ditzy wife over for dinner and ......well let's just say things got a little heated!" Nancy raged. "To make it worse , Jeff didn't even try to defend me and even said the argument was all my fault and wanted me to apologise!"

Janet stared into Nancy's eyes.
"I want you to calm down and tell me the truth Nancy....was it your fault?"
Nancy had seen that look and heard that question before .....and it usually preceded a good dose of her Mom's hairbrush to her backside!
"Well I suppose....sort of.....but that woman was such a bitch so that's what I called her!"
Gerry's jaw dropped .
"You called Jeff's boss's wife a bitch?"
Nancy bowed her head and nodded.
"That wasn't all she called her!" a male voice called out from behind her. 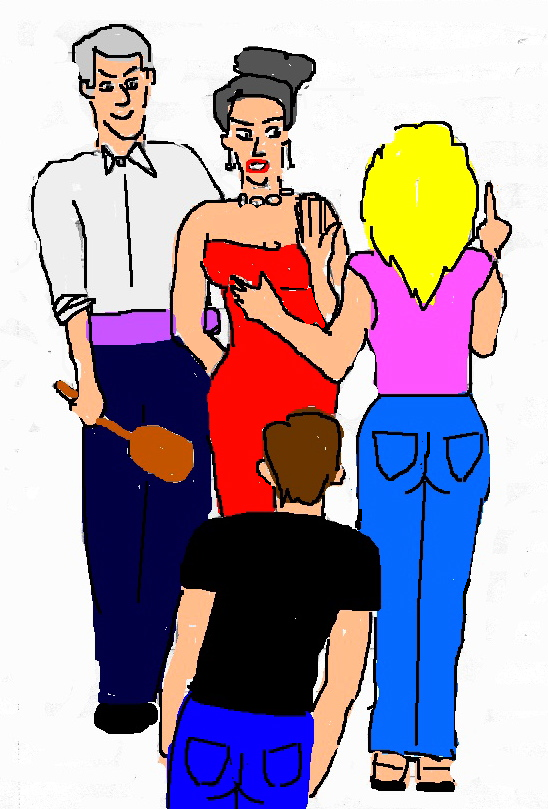 "JEFF! What are you doing here? I told you I never wanted to see you again!" Nancy fumed.
Jeff stepped close to his wife , towering over her.
"...and I told you that you were behaving like a spoilt brat and deserved a good spanking!"
Nancy's eyes opened as wide as saucers.
"Don't you dare threaten me in front of my parents!" she yelled nervously.

Gerry  tapped the back of the bath-brush against his palm and stepped forward.
"Here....you'll need this Jeff ...and the chair is already out." he said , handing the brush to his son-in-law.
"DAD!" Nancy cried indignantly.
She yelped when Jeff took a firm grip on her ear and led her into the bedroom. 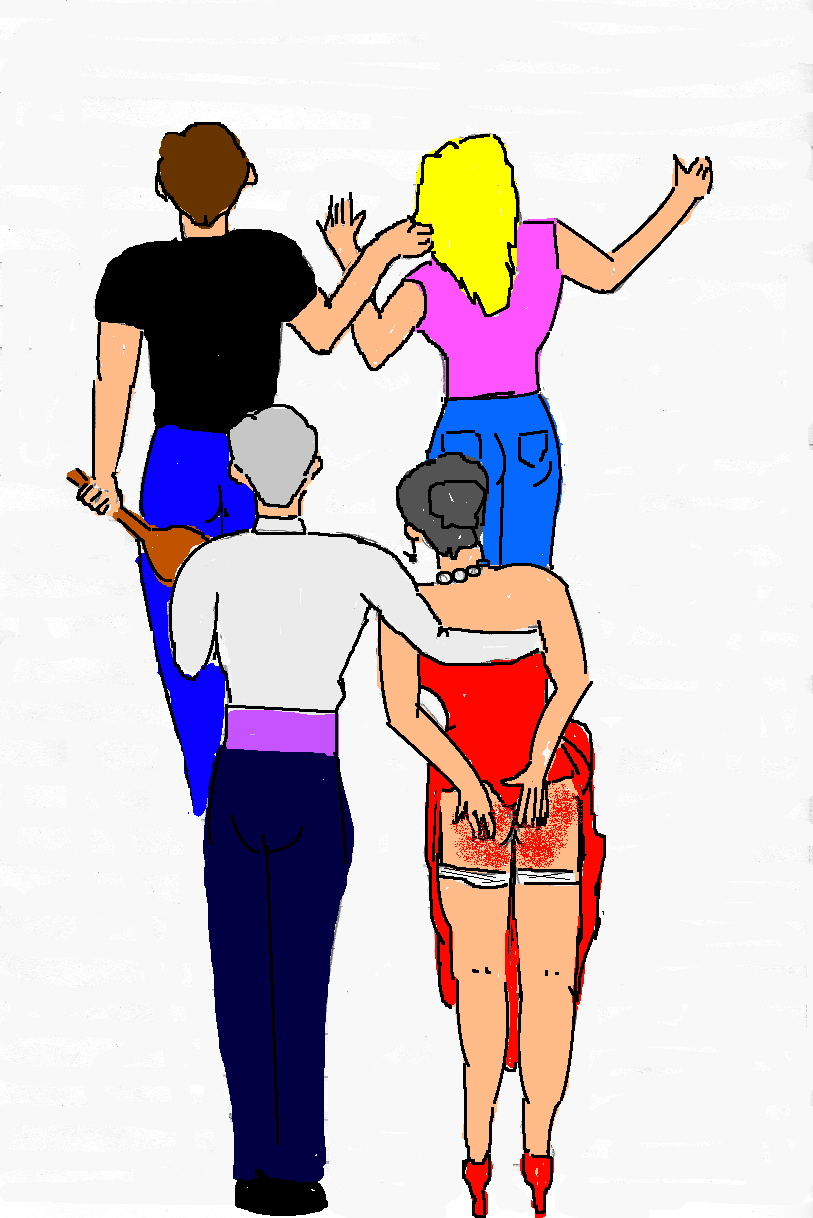 Gerry put an arm around Janet when the bedroom door closed.
Janet hoisted her skirt and resumed rubbing her sore bottom.
They both stood listening at the door until the proceedings inside were underway.
Jeff wasn't saying much , but Nancy was loudly pleading and apologizing.
"Please Jeff....not on my bare bottom....that brush really hurts...." Nancy pleaded.
"I KNOW! " Jeff agreed.
They had a similar one at home which Nancy had used on him a couple of times.
He knew how much it hurt but it was what she needed. 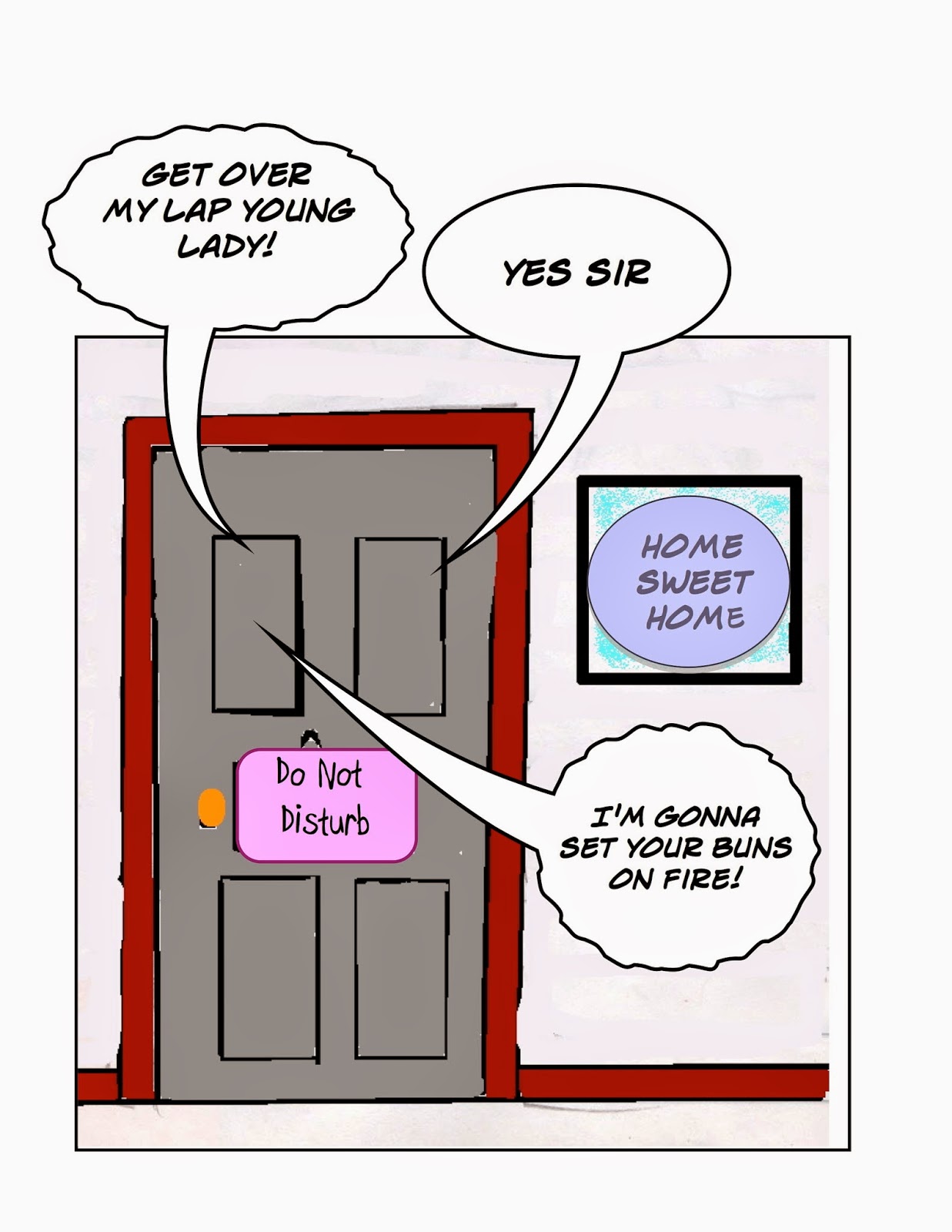