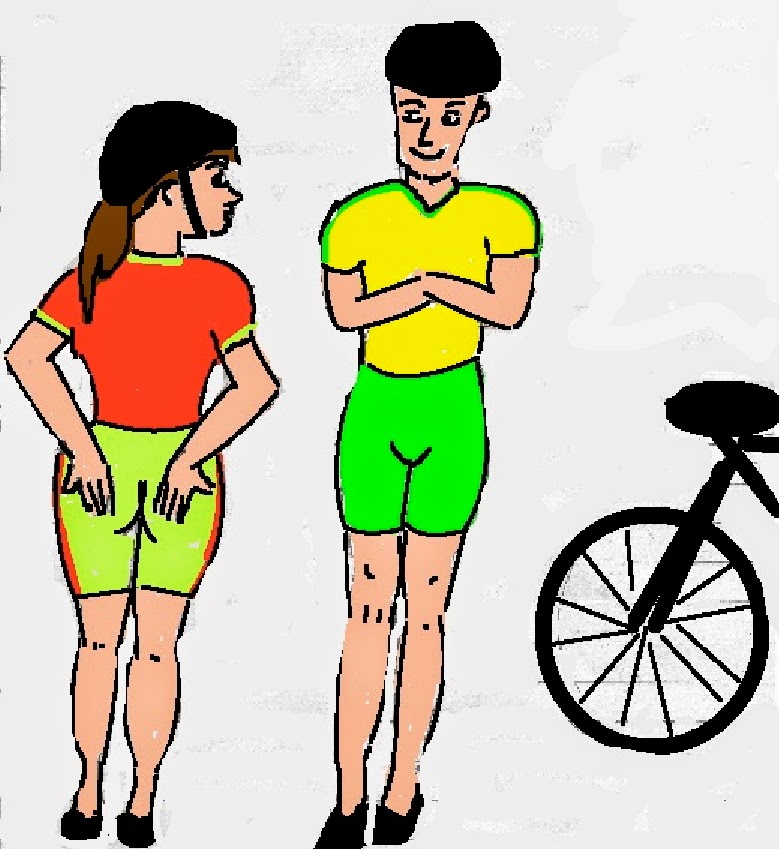 Charles dismounted from his bike and scanned the area where he usually caught up with May after her 1 kilometre sprint home.
There was no sign of her so he began to worry.
Perhaps he  had somehow passed her without noticing he thought , so he began riding back along the trail.

After about 100 metres he heard a female voice calling out.
It was coming from the bushes at the bottom of a steep ravine near the bike path.
Alarmed that May was hurt , Charles leapt off his bike and quickly descended into the ravine to investigate.

"YEOOW ! OW ! SHIT !" a female voice cried out.
Charles was relieved to hear May's voice and when he moved closer he could see the bright red color of her biking outfit through the bushes.
Moving carefully through the dense bush , he finally reached May and could not hide his amusement at the sight.
"It's not funny Charles ....get me outa here !" May shrieked angrily.
Only May's head  , shoulders and lower legs were visible - the rest of her was deeply entrenched in a large cactus plant.

Trying to look serious , Charles surveyed the situation.
Luckily , May's bike had taken the brunt of the fall but had propelled her backwards , seat-first onto the prickly plant.
"Hmmm...you don't usually find cactus's this size in these parts..." he commented.
"Forget the damn botany lesson Charles and get me out ! OOOOUCH! " May screeched trying to wriggle herself free.

After confirming May had no serious injuries , Charles set about freeing her from the cactus.
He was able to move some of the larger limbs away so he could get a grip on May's arms.
"I'm going to haul you up May....but it might hurt a bit....you're sitting right on the biggest part of the plant.
"OOOW! You don't think I know that you idiot ? PULL!" May ordered.

Charles give her a yank and she sprung up , with some of the plant still clinging stubbornly to her backside.
"AAAARRGGH!" May bellowed in a most unladylike fashion.
May stood bent over , looking behind her with  arms outstretched and fingers wiggling .
"OOOOH IT HURTS ! How bad is it Charles ?" she asked amxiously.

At least a dozen large cactus needles were deeply imbedded in the seat of May's spandex cycling pants , but apart from a few scratches on her arm and legs she was fine.
"We're going to have to get those quills out before they get infected....lets get you home May." Charles said .

It was a short but painful walk home for May , her behind looking like a pincushion and the front wheel of her bike wobbling badly.
When they arrived home , Charles retrieved the tweezers from May's vanity dresser.
Pulling out a sturdy chair he sat down and guided a grateful May over his lap and went to work with the tweezers.

"AAAAH! GO EASY CHARLES!" May howled when he boldly yanked out the first quill.
"Just be quiet and hold still May !" Charles scolded.
He was tempted to give May's shapely rear a few good smacks for good measure but the cactus quills prevented him.

It was a long ,  exercise , with May squirming and hollering throughout , but Charles was able to extract all the quills from the seat of her pants.
"W...WWhat are you doing Charles?" an outraged May cried when she felt his fingers in the waistband of her shorts.
"I have to inspect the damage and put on some antiseptic . In case you haven't noticed , you're in no position to do that yourself young lady!" Charles scolded.

Charles grinned with satisfaction after releasing May's curvaceous twin globes from the spandex.
The quills had generated a nasty red rash covering her entire bottom and he could see some tiny holes where the quills had been impaled.
The application of the antiseptic cream to the area brought relief to May and pleasure to both of them .

May giggled."This is quite ironic isn't it Charles?"
"What do you mean?" he asked.
"Well its usually me sitting on this chair with you over my knee getting a spanking with my hairbrush!" she remarked.

Charles blushed but sensed an opportunity.
"That's true May....and as I recall , the last time you blistered my butt was because my bicycle wasn't safe.....so do you mind telling me how 'little miss safety ' managed to crash into that ravine?"

May's shifted on his lap as she thought about a suitable response.
"Er....um...ah....well a dog ran out in front of me and I braked to avoid it.....yea...that's it." she said in a tone which lacked conviction.
"OOW!" May yelped when Charles gave her tender bottom a pair of sharp spanks making both her bare cheeks jiggle seductively.

"You are no position to be telling stories young lady! I want the truth...." he said.
"How dare you Charles!" May said indignantly.
Her reward was another series  of smarting spanks to her bottom.
"OW! OUCH! OK OK!......I was going way faster than I should have at the bend so taking the ravine was my only option!" she confessed.

Charles smiled and May suddenly felt very guilty and vulnerable lying face down and bare bottomed over his lap.
"Let me ask you a question May....if I had done that.... what would the consequences be?"
May did not take long to respond.
"I'd be fetching my hairbrush...."
Charles waited for more.
".....and I'd spank you.....HARD.....VERY HARD!" May continued.
"How Many?" Charles asked.
May sighed loudly , "....at least 200....maybe more!" she blurted.

May's cheeks clenched when Charles patted them playfully.
"200 or more eh?" Charles teased.
"Please Charles...don't spank me ...my poor bottom is already so sore from those darn cactus quills.." May pouted and waited anxiously for his decision.
"You're absolutely right May....your bottom does look to be  pretty sore...." Charles began.

May had never been spanked before so was taken completely by surprise..
She  had spanked Charles a number of times  , but never thought he would ever have the nerve to paddle her cute little princess tush.

The spanking really stung , but as her cheeks warmed ,May also found it stimulating and her bottom began to rise instinctively to meet Charles' palm.
In between spanks , Charles caressed May's burning red cheeks.
They were hot to the touch ...but interestingly May demanded he continue to spank her even harder.
"SPANK ME HARDER DAMMIT !"
Charles gladly obliged.

After a final frenzy of spanks which had May bouncing all over his lap , her backside was a glowing red .
May slid off his lap , but Charles scooped her into his arms and carried her upstairs to the bedroom.

After an hour or more of love-making , Charles led a reluctant May outside again to repair her bike.
"How does it feel when the shoe is on the other foot May?" Charles asked.
May rubbed the seat of her tight cycling shorts.
"AW Charles....do we have to go for another bike ride ? My poor bottom is soooo sore..." she pouted.
Charles wagged a finger at her.
"Get that cute little behind of yours on that saddle and keep it there for the entire ride!" he ordered.
"YESSIR!" May responded.