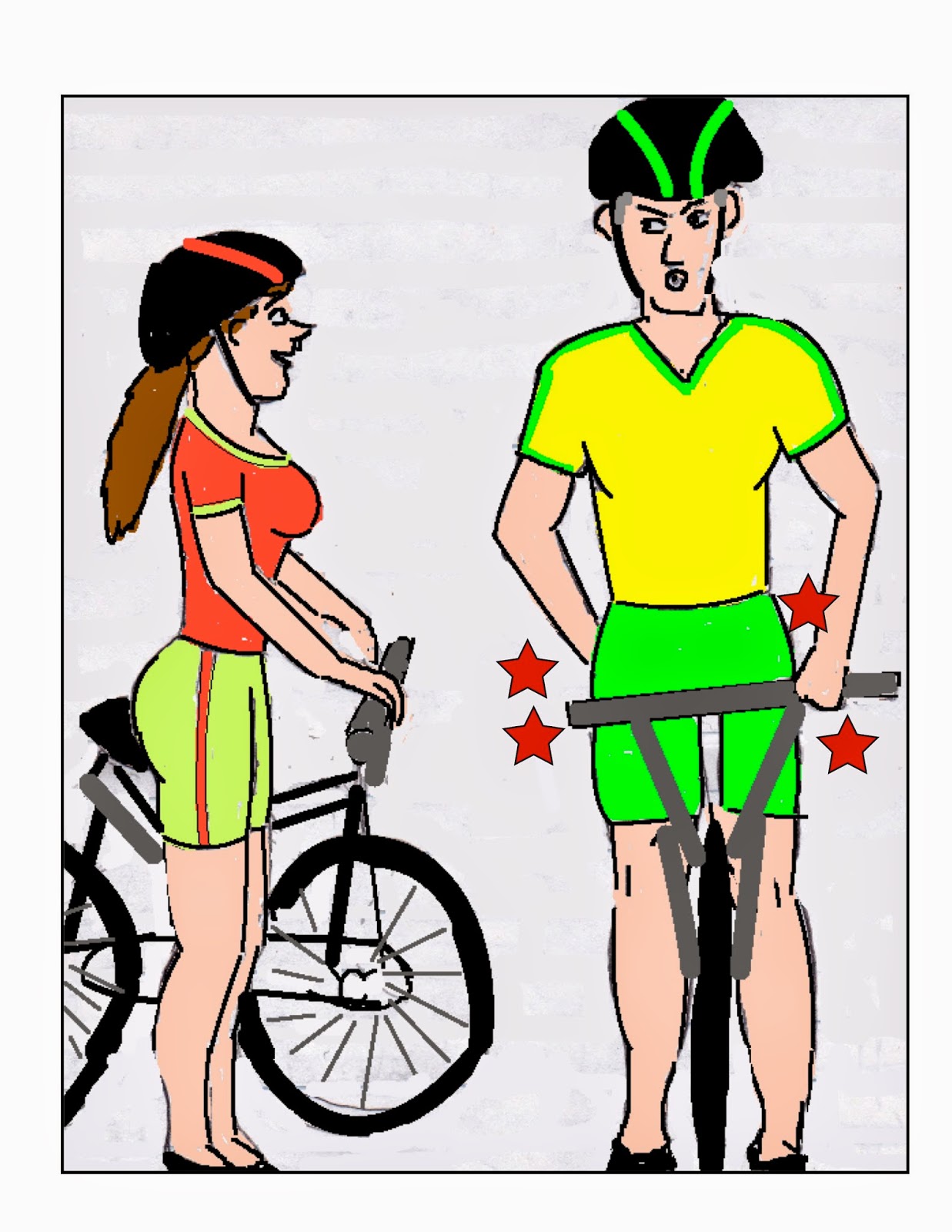 May leaned over to have a closer look at Charles' bicycle while he looked on anxiously.
Methodically she slowly paced around his machine , scanning it with a keen eye and scribbling occasionally in her notebook.

"Not bad Charles..." she began , "....at least its safe enough to ride this time!" she remarked , just a hint of sarcasm in her tone.
Charles looked pleased but uncertain , "So I've passed then?"
"Not quite I'm afraid Charles , “ May replied , consulting her notebook.
“The chain is a bit on the loose side , the front wheel has a slightly bent spoke ,the air pressure in your tires is way too high , and you're missing a few important items from your emergency kit ." she advised.
"Those don't sound too important May." Charles responded anxiously.
May looked at him scornfully.
"They are ALL important  ! That’s why I gave you a full checklist , which clearly you failed to use or you wouldn't have four violations would you Charles?"

There was a momentary pause before May continued.
"Our agreement was very clear Charles. Let’s have you inside please."she said.
"AW SHOOT ! Come on May...it's not fair!" Charles protested , angrily stamping his foot.
"I'm sorry Charles but you did agree to this . The first three violations earn you 100 with my hairbrush , plus another 25 for each additional violation.....and I'm adding another 25 for that little tantrum display of yours just now .....that makes 150 spanks!" she declared.

"AW! Can't we do this later May.....I...." Charles started to plead but May was already marching back to the house.
Reluctantly , Charles followed and stood by the dining room chair while May retrieved the hairbrush from the coffee table.

She always made a point of leaving it in full view as a reminder to Charles of the empowerment it gave her and the damage it would render to his backside if her stepped out of line.

May had even given the brush a name , ‘Miss Manners’ , so she could descretely refer to it in public.

"OUCH!" Charles yelped , when May gave his rump a hearty
slap with her palm..
May sat on the chair and looked up at him smiling.
"You know the routine Charles. Get those pants down. Over my knee and on the bare." she said.

Charles sighed loudly and began peeling down his spandex cycling
shorts.
“Continue with that attitude young man and I’ll make it an even 200 spanks!” May scolded.
“Yes Ma’am....sorry Ma’am..” came the subdued reply.

Leaning back in the chair , May pointed to her lap.
"Over you go honey. It’s time for you and Miss Manners to get acquainted again!" May chuckled.
Obediently Charles draped himself over his Fiance’s lap and May immediately went to work with the hairbrush - as only May can.....bringing it down smartly on her Fiance’s bare behind a full 150 times.

Each one was a 'stinger' and May made sure to pay particular attention to the tender area where her man's buttocks met his upper thighs.
She would make sure he would be feeling this rach time he sat for the next day or two!

After 25 spanks Charles was howling , by 50 he was pleading and apologizing , by 100 he had real tears and was begging for May to stop , for the final 50 rapidfire spanks he just lay there wailing and waiting for it to end.

Throughout his spanking , May paused to recite from the bicycle safety list she had given Charles , giving her spanks an extra 'zip' to emphasize each point.
"Check the pressure in both tires!"
'THWAAAP' 'WHOP!' 'WHOP!'
"OOOOW!" "YEOOW!"

A short while later , they were both outside again .
Charles tinkered with his bike as May stood over him supervising.
Finally , when she was satisfied it met her requirements , May mounted her bike.

While May sat comfortably on her saddle , Charles could barely sit on his.
"A little tender back there are we Charles?" she teased.
Charles grimaced and rubbed his backside.
"More than a little I'd say Honey. 150 whacks with that brush of yours is no joke!" he responded ,a hint of a grin behind his grimace.
May giggled."You must be the only person to be saddle sore BEFORE a bike ride!"