Lucy and her best friend Jenny had been getting together on Friday evenings since college.
In the beginning it was regular girls night out to watch a movie or go dancing at a club , but their get-togethers had become very sporadic since Jenny married Peter a couple of years ago.
When Lucy and Alan became engaged a few months ago , the two friends renewed their Friday social , albeit with their somewhat reluctant men in tow.

For the initial socials the girls each took turns hosting an evening which would include a friendly board game , but the fiercely competitive natures of Peter and Alan soon ruined the enjoyment , and the evenings inevitably ended with the visitors leaving early because the atmosphere became too heated.

Alan and Peter were always very repentent the following week , but their poor behaviour would quickly return.
They argued , accused , yelled , swore and called each other names.
for Lucy and Jen it was like spending an evening with a pair of 8 year olds.

Finally one evening the girls had been pushed too far , so instead of ending the evening early and having it out with their men afterwards , the ladies decided to deal with their errant husbands right there and then !
For 'blow-by-blow' details of that evening I will refer you to Underling Humblings story 'Sore Losers' wich you can link to here :

That evening Lucy and Jenny discovered that they had something else in common - they both spanked their men when they needed it !
They both had an inkling that they shared a passion of applying a hairbrush to a naughty male backside but that evening brought everything out in the open.
After all those evenings which had ended prematurely , it turns out Alan and Peter received the same type of discipline.

Following the events of that fateful evening , the behaviour of Peter and Alan improved dramatically  .
It seems the embarrassment of being led by the ear to the bedroom for a soundly spanking , and their rival being able to listen to their howling and bawling and watch their squirming in their seat ,  had the desired effect.
The two men could hardly be called friends now , but they grew to enjoy each othher's company on Friday nights.

Now , as we all know , poor behavior is not the sole domain of the male animal , and  Lucy and Jenny were certainly no angels.
Alan and Peter had to give their ladies a strong scolding on more than one occasion and sometimes were required to cut-off their supply of wine to calm them down.
Lucy and Jenny had always been a pair of wild ones when they were together , and the passing years  had changed little.

One Friday , Jenny and Peter had a surprise for their friends - they had purchased a hot-tub.
So the two couples , donned their swimsuits and , with an ample supply of drinks and snacks on hand , settled into the steaming 102degree water for a relaxing evening.

The wine flowed freely for the two girls who ignored the requests from their menfolk to get out of the tub once in a while and take a break.
They were belligerent , accusing the two men of being 'spoilsports' and 'fuddy duddies'.
As the wine  and hot water took its toll ,  the female foolishness intensified. 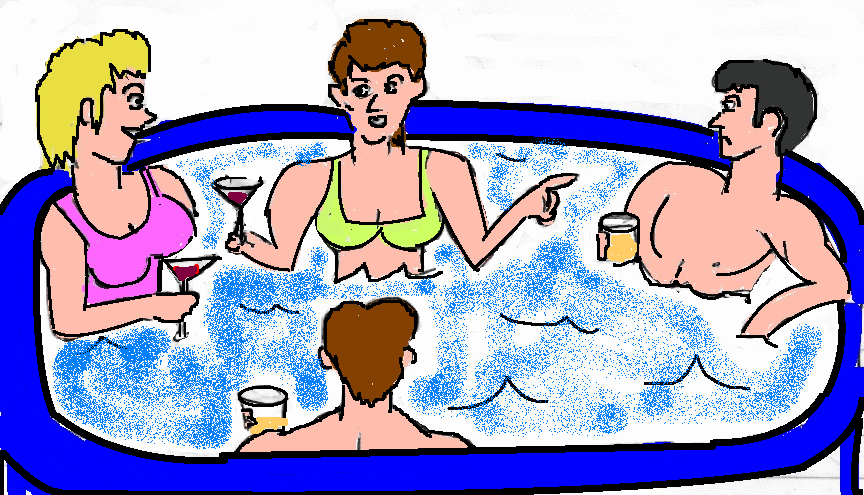 The girls began reminiscing and exchanging stories about the many times they had occasion to paddle their man's bare backside.
Alan and Peter were red-faced as Lucy and Jenny took turns in describing the spankings they had administered - in great detail.
There was much giggling , cackling and teasing from the two ladies as Alan and Peter simmered in the hot tub.

"Remember that time I paddled you in your office at work Pete ?" Jenny laughed.
"Don't go there Jen...." Peter warned , but Jenny was unperturbed.
"He knew he had a doozie of a butt roasting coming so he worked late all week , thinking he could get out of it and I would forget......but you underestimated your little wifie didn'y you hon..?" she continued.

Peter asked Jenny to stop but Lucy encouraged her friend to continue.
"You should have seen his face when I showed up at his office with my hairbrush.....luckily for him , the only people left were a couple of cleaning ladies....but I put on quite the show for them anyway . Their expression was priceless when they looked through the office window and saw Pete bare-assed over my lap and me whaling away with the brush.."

This time Peter's tone was firm.
"OK Jen that's enough...." he warned.
"OR WHAT BIG MAN ?" Jenny challenged , sticking out her tongue at her husband.
Raising himself up , Peter calmly addressed his guests.
"Excuse me guys but I need to attend to something with Jenny ....wont be long...." 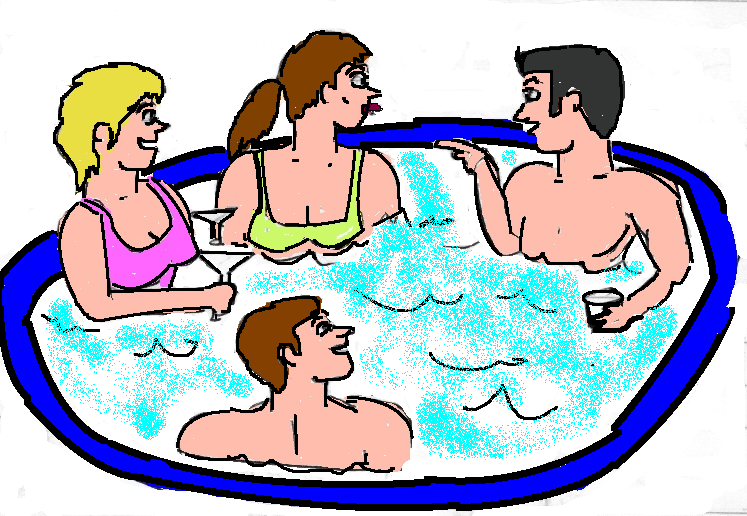 For a brief moment Jenny looked genuinely concerned , but had little time to react.
Within seconds she was shrieking loudly when Peter grabbed her ear , scooped her out of the tub and carried her , fireman style into the nearby changing room. 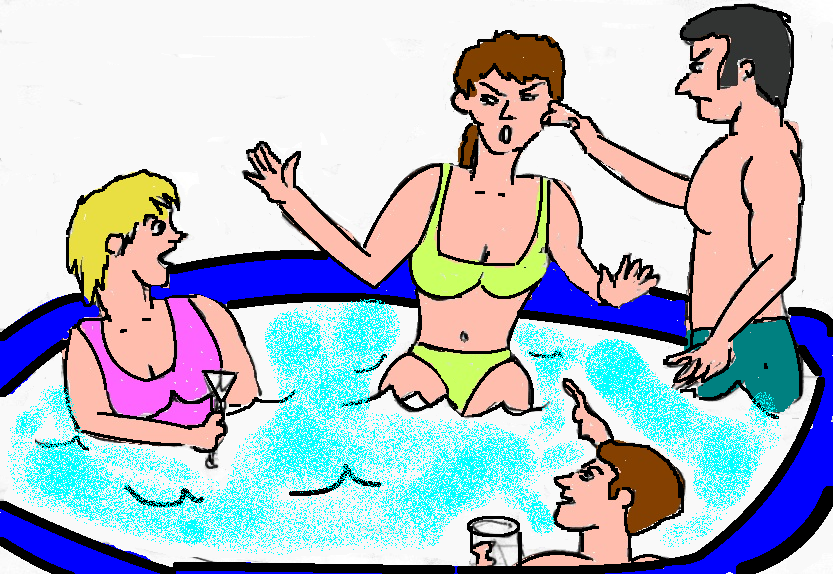 Lucy was shocked but Alan looked on with glee as the sounds of a good hard spanking filled the room.
"OOOH poor Jen!" Lucy cried , cringing when a series of especially hard spanks had her friend wailing loudly.
Jenny's spanking went on for over 5 minutes .
Lucy did not know where to look and felt her fiance's threatening eyes stare at her. 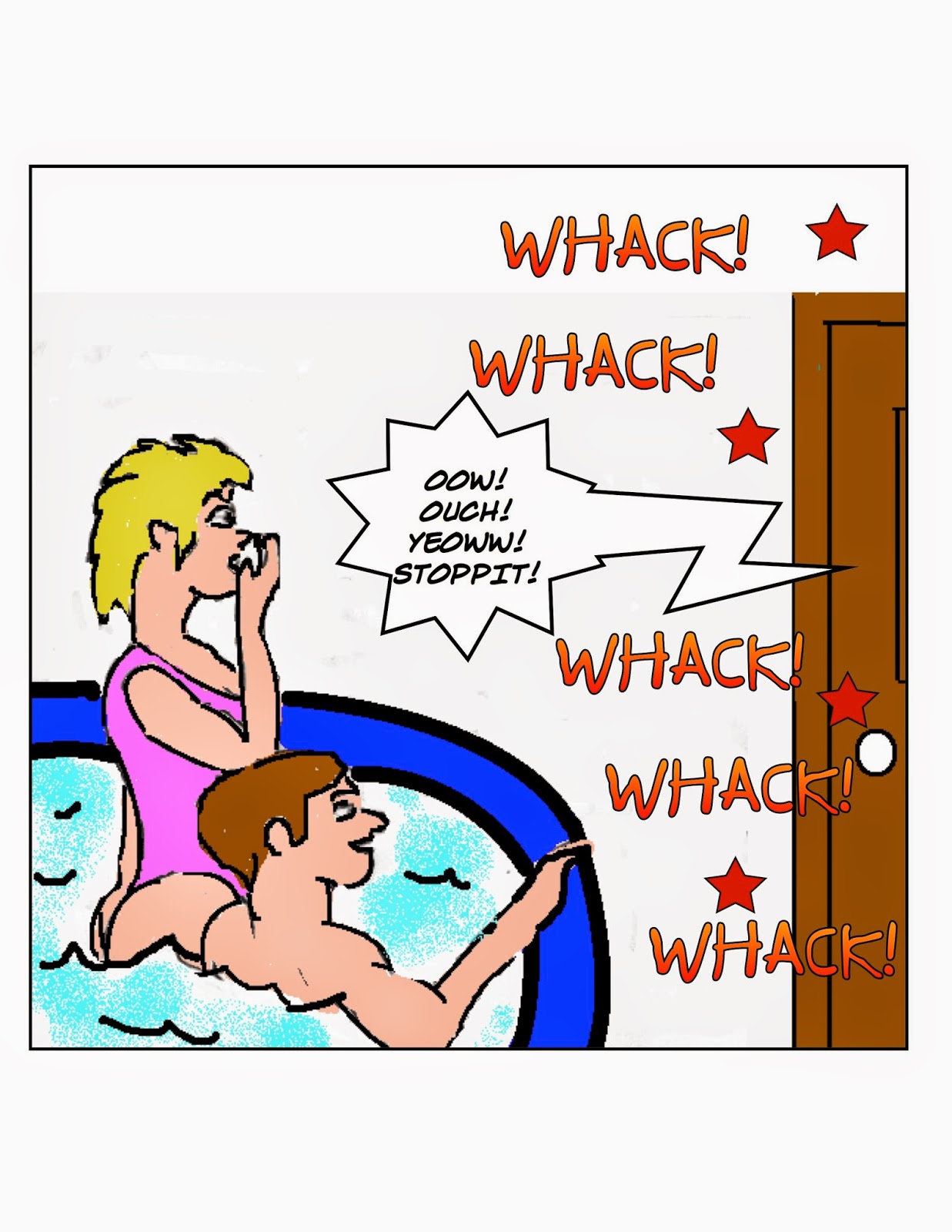 Finally , their friends emerged , Peter looking determined but satisfied , and Jenny adjusting her bikini bottoms and dabbing real tears from her eyes.
As she passed by , Alan chuckled when he caught a glimpse of her two red cheeks , fully exposed by her skimpy suit.

Peter sat down in the tub and beckoned to his wife.
"Come on then....get in and behave  - and take it easy on the wine !" he scolded.
Jenny clamboured into the tub .
"OOOOOH ! IT'S SOOOO HOT !" she hissed when her well-spanked bottom  met the bubbling hot  water.
"SIT!" Peter ordered.
Slowly and carefully his wife lowered herself into the tub , grimacing and wincing as she tried to sit. 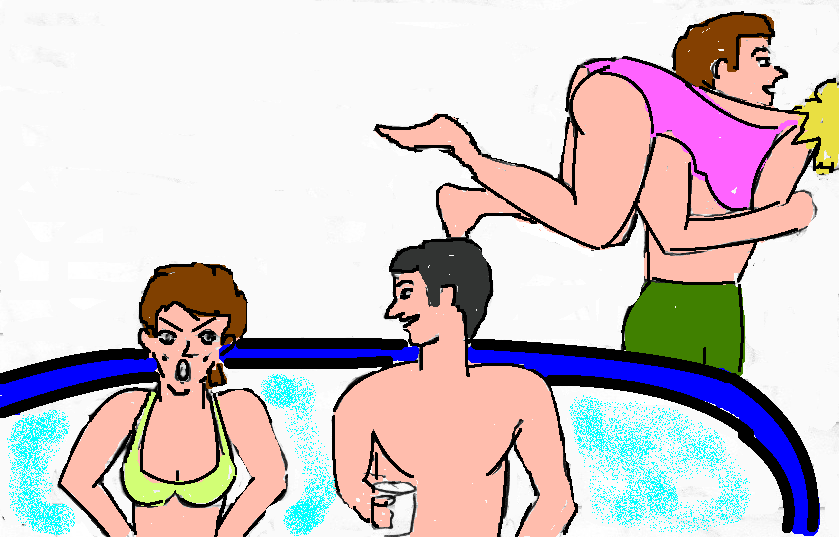 Alan looked at Lucy who was still avoiding his gaze.
Her jaw dropped when Alan stood up and towered over her.
"Up you get Lucy- Your turn !" he grinned.
Lucy's escape attempt was fruitless and she was soon draped over Alan's shoulder , legs kicking and screaming loudly.
"I left a size 10 flip-flop by the door for you Alan! It stings like the dickens !" Peter called out.
"Thanks Pete!"
The two men finally had something in common......... 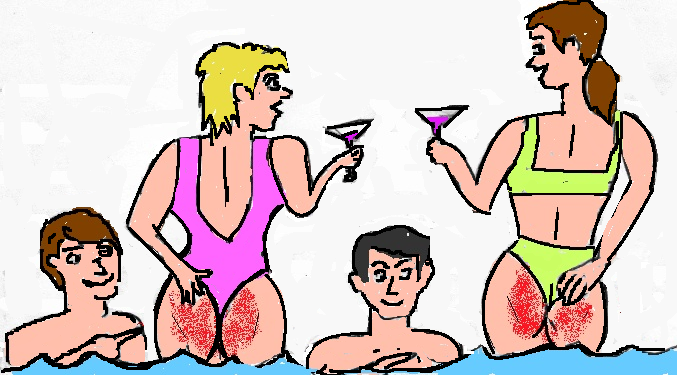